H 27.56 in. W 30.32 in. D 29.53 in.
Dobra Outdoor Lounge Chair in Chenille Soft Rope by Filipe Ramos
By Filipe Ramos
Located in Sao Paulo, Sao Paulo
The Dobra outdoor lounge chair is part of the Dobra furniture line which is designed with the concept of a continue steel bar folded to create legs and frames for the different compo...
Category

H 31.75 in. W 32.25 in. D 38.5 in.
Pair of Round Metal Outdoor Garden Chairs
Located in Los Angeles, CA
Pair of round bowl shaped metal outdoor or garden chairs.
Category

H 25 in. W 34 in. D 34 in.
Arco Armchair, by RAIN, Contemporary Armchair, Upholstery on Wood Structure
By RAIN
Located in Sao Paulo, SP
Arco is an upholstered armchair of simple and enveloping geometry. The shape of the piece reproduces the arch of the body, creating a welcoming anatomical shell. The armchair is cove...
Category 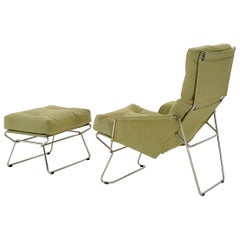 H 39.38 in. W 33.08 in. D 36.23 in.
Pair of Carlo Hauner Martin Eisler Shell Chairs for Forma, Brazil, 1950s
By Carlo Hauner and Martin Eisler, Forma Brazil
Located in London, GB
The emerging interest in Brazilian design and manufacturing is palpable across both contemporary and midcentury design. The Shell lounge chair is establishing itself as an icon of th...
Category

H 30.71 in. W 29.14 in. D 30.32 in.
Savana Armchair in Natural Wicker, Brazilian Contemporary Style
By Tiago Curioni
Located in Sao Paulo, SP
This armchair is made of wicker in the Brazilian contemporary style. A clump of grass, a bush, which moves in the wind and envelops its inhabitant was the inspiration for creating t...
Category

Lounge Chair in Rosewood with Beige Upholstery by Fatima, circa 1960

Pair of "Drummond" Lounge Chairs by Sergio Rodrigues for OCA, 1959

H 27.56 in. W 42.13 in. D 29.53 in.
Iconic Barcelona Style Chair with Chrome Base
Located in Lambertville, NJ
Barcelona style chair with newly upholstered natural sail cloth. The chrome frame is heavy steel and circa 1970s and marked made in Argentina (in Spanish). This chair is very versati...
Category

H 30 in. W 29 in. D 30 in.
Martin Eisler & Carlo Hauner Early "Concha" Iron Lounge Chair, Brazil, 1950s
By Carlo Hauner and Martin Eisler
Located in Sao Paulo, SP
This rare variation of the iconic design is visually and physically lighter as the &quot;shell&quot; doesn't protrude to form &quot;arms&quot;. It's documented as being an early 1950...
Category

H 28.5 in. W 29 in. D 27 in.
1960s Pair of Lounge Chairs in Wrought Iron and Tricot, Brazilian Modernism
Located in Sao Paulo, SP
This super modern chairs have been repainted and reupholstered in an amazing off-white tricot fabric, super soft and cozy. The design of the chairs is sleek and they're super well bu...
Category

H 35.44 in. W 23.63 in. D 25.6 in.
Pair of Sculptural Mid-Century Lounge Chairs, Brazil, 1950s
By Sergio Rodrigues
Located in Miami, FL
A pair of quite rare lounge chairs. The frames are solid wood, the seats are cantilevered and only attached to the frame at the back, they are floating at the front, such an ingeniou...
Category

H 28.5 in. W 28 in. D 30 in.
Katinsky Lounge Chair, Brazilian Midcentury Modern
By Julio Katinski
Located in Sao Paulo, SP
This lounge chair, in the Brazilian midcentury style, is a very comfortable piece with a highly modern design, is his most iconic creation in Brazil. We have two pairs available. ...
Category

H 23.63 in. W 25.2 in. D 22.45 in.
Lounge Chair 001, by Guilherme Wentz, Brazilian Contemporary Design
By Guilherme Wentz
Located in Sao Paulo, SP
The lounge chair 001 is a study and an exercise about the resistance and flexibility of materials. Made entirely in metal, it tries to mimic the fluid movement of a piece of fabric o...
Category

H 35.44 in. W 41.74 in. D 29.14 in.
"Bodocongó" Lounge Chair - Available in NY
By Sergio Matos
Located in Campina Grande, Paraiba
This lounge chair, in a Brazilian contemporary design, is made of carbon steel, wood, and rope. The lounge chair is inspired by the elements of the free market of Campina Grande ...
Category

H 30.32 in. W 38.98 in. D 39.38 in.
"Bodocongó" Lounge Chair in Carbon Steel, Wood and Rope, Brazilian Design
By Sergio Matos
Located in Campina Grande, Paraiba
This lounge chair, in a Brazilian contemporary design, is made of carbon steel, wood, and rope. The piece is inspired by the elements of the free market of Campina Granda at Paraíba.
Category

Lounge Chair and Ottoman by Oscar Niemeyer for Mobilier International, 1975

H 32 in. W 40 in. D 34 in. L 32 in.
Midcentury brazilian "MP-1" Armchair by Percival Lafer, 1961
By Lafer, Percival Lafer
Located in Sao Paulo, SP
The MP-1 armchair, in this midcentury Brazilian style, was Percival Lafer's first successful project. The MP-001 was a lightweight modern-looking piece whose origins are taught at t...
Category

H 27.17 in. W 29.14 in. D 30.32 in.
"Savanna" Armchair in Wicker, Brazilian Contemporary Design, Limited Edition
By Tiago Curioni
Located in Clifton, NJ
This armchair is made of wicker in the Brazilian contemporary style. A clump of grass, a bush, which moves in the wind and envelops its inhabitant was the inspiration for creating th...
Category

How Much are Beige South American Lounge Chairs?

Beige south american lounge chairs can differ in price owing to various characteristics — the average selling price at 1stDibs is $7,400, while the lowest priced sells for $2,600 and the highest can go for as much as $22,447.