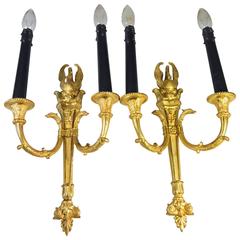 H 15.75 in. W 7.88 in. D 4.73 in.
19th Century Empire Bronze Sconces
Located in Paris, FR
Pair of gilt and patinated bronze sconces from embellished with winged Victories. Each sconce features four candlestick branches that terminate in lions heads and are intricately scu...
Category

H 14 in. W 7.25 in. D 4.25 in.
Large Pair of Empire Wall Sconces in Bronze, Italy
Located in Nürnberg, DE
Pair of large appliques with new electrical wiring and faux candles set in bronze in the shape of tassels. Each fixture requires two European E14 candelabras bulbs, each bulb up to 4...
Category

H 8.5 in. W 10.5 in. D 9.5 in.
Pair of French Second Empire Three-Light Wall Sconces
Located in Montreal, QC
These good quality sconces in mat black and gilt bronze are pierced with scrolls and flower heads and with drip pans and arms cast with stylized acanthus. The two-tone gilding and ha...
Category

H 20 in. W 8.5 in. D 6 in.
Two French Gilt and Patinated Bronze Sconces
Located in London, GB
These two sconces have been crafted in the Empire style, which was popularised by the French Emperor, Napoleon I. The Empire style is characterised by its grandeur and use of opulent...
Category

How Much is a Empire Sconce Gilt?

Finding the Right Wall Lights and Sconces for You

From the kitchen to the bedroom and everywhere in between, there is one major part of home decor that you definitely want to master: lighting. It’s no longer merely practical — carefully selected wall lights and sconces can do wonders in establishing mood and highlighting your distinctive personality.

We’re a long way from the candelabra-inspired chandeliers of the medieval era. Lighting designers have been creating and reinventing lighting solutions for eons. Because of the advancements crafted by these venturesome makers, we now have the opportunity to bring unique, customizable lighting solutions into our homes. It’s never been easier to create dramatic bedrooms, cozy kitchen areas and cheerful bars than it is today. Think of an elegant wall sconce as functional as well as a work of art, adding both light and style to your hallways, whimsical kids’ rooms and elsewhere.

When choosing a lighting solution, first determine what your needs are: Will you opt for a moody or a bright feel? The room that will serve as your home office will need adequate lighting — think “the brighter, the better” for this particular setting. For the bedroom, bedside wall lamps with warm-temperature bulbs could be the way to go to induce a sense of calm or intimacy. Try to match the style of the wall light or sconce that you’re installing to the overall design scheme of your room. It’s never “just a light.” You should approach the lighting of a room with a mindset that is one part practical and one part aesthetics-driven.

Let 1stDibs help you set the mood with the right wall lights and sconces for your home. Our collection includes every kind of fixture, from sculptural works by Austrian craftsman J.T. Kalmar to chic industrial-style wall sconces, from adjustable painted aluminum wall lamps designed by Artemide to a wide variety of minimalist mid-century modern masterpieces.