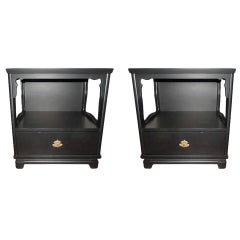 Pair of Ebony Kent Coffey Nightstands from the Ming Collection

H 25 in. W 24 in. D 24 in.
Kent-Coffey Nightstands in Walnut
By Kent Coffey
Located in Brooklyn, NY
Handsome pair of Mid-Century Modern nightstands. Executed in walnut with brass pulls. Manufactured in North Carolina by Kent-Coffey for the Greenbrier line. Tops have been refinished...
Category

H 25 in. W 24.5 in. D 17 in.
Kent Coffey Tableau Mid-Century Nightstand
By Kent Coffey
Located in Countryside, IL
Kent Coffey tableau mid-century nightstand The nightstand measures: 23.25 wide x 22.25 deep x 24 inches high All pieces of furniture can be had in what we call restored vintage...
Category

H 31.5 in. W 36 in. D 19 in.
Pair of Midcentury Nightstands, Kent Coffey's "Parkway" Line
By Kent Coffey
Located in Brooklyn, NY
Pair of midcentury nightstands manufactured by Kent Coffey as part of their "Parkway" line of furniture. Handsome walnut veneer exterior with a series of raised accents on the doveta...
Category

Mid-Century Modern Nightstands by Kent Coffey in Mahogany, a Pair

A Pair of Kent Coffey Nightstands in Natural Walnut

H 25 in. W 23.5 in. D 20 in.
Perspecta Nightstand by Kent Coffey
By Kent Coffey
Located in New York, NY
Perspecta line nightstand designed by Kent Coffey. Executed in walnut, elm and rosewood, lower shelf 9 inch H. Originally designed as a night table, this can also double as an end or...
Category

H 24.25 in. W 34 in. D 16 in.
Mid-Century Modern Nightstand by Kent Coffey
By Kent Coffey
Located in Jacksonville, FL
From the Town House collection by Kent Coffey, this nightstand adds the perfect midcentury style to a bedroom, or even as an end table in the living room. Excellent vintage condition...
Category

H 25.25 in. W 23 in. D 17 in.
Sculpted Front Mid-Century Nightstands For Kent Coffey
By Kent Coffey
Located in Brooklyn, NY
Lovely nightstands made by Kent Coffey featuring their classic sculpted "bow", this time doubling as a handle. Nice walnut grain, extra shelf for storage. Adds style and function to ...
Category

H 23 in. W 24 in. D 15 in.
Kent Coffey Continental Mid-Century Walnut Nightstand, a Pair
By Kent Coffey
Located in Countryside, IL
Kent Coffey continental mid century walnut nightstand - a pair. Each nightstand measures: 22 wide x 18 deep x 26.5 inches high. All pieces of furniture can be had in what we ca...
Category

H 24 in. W 16 in. D 25 in.
Pair of Midcentury Danish Modern Kent Coffey 'Insignia' Walnut Nightstands
By Kent Coffey
Located in Wilmington, DE
Offered is a pair of Mid-Century Modern nightstands by Kent Coffey's 'Insignia' line. This set is made of walnut, with each featuring one dove-tailed drawer and open storage cabinet....
Category

H 24.25 in. W 23 in. D 14.5 in.
Pair of Mid-Century Modern Kent Coffey 'The Forum' Walnut Nightstands
By Kent Coffey
Located in Wilmington, DE
Offered is a pair of walnut nightstands made by Kent Coffey "The Forum". Feature two dovetailed drawers per stand with metal trim on the pulls. They are in good condition, tops and s...
Category

H 25.25 in. W 25 in.
Pair of Walnut Mid-Century Nightstands from the Kent Coffey Forum Series
By Kent Coffey
Located in Crockett, CA
Pair of Mid-Century walnut nightstands with two drawers. The base is 9 1/2" tall, the drawer interiors are 3 1/4" and 4" tall, drawers are very easy to operate with finger pulls at t...
Category

H 26.5 in. W 22 in. D 18 in.
Mid Century Modern Walnut Nightstands
By Kent Coffey
Located in Redding, CT
With its retro sculptural lines these tables are similar to the Kent Coffey Perspecta line.
Category

H 23 in. W 24 in. D 16 in.
White Pair of Modern Bombay Chest/Nightstands with Brass Hardware
By Kent Coffey
Located in Houston, TX
Great pair of white Bombay chests/nightstands with brass hardware. The nightstands are in nice vintage condition and would be great as bedside tables/nightstands/or chests. The night...
Category

H 26.5 in. W 23 in. D 16 in.
Pair of Mid Century Kent Coffey Nightstands "The Elegante"
By Kent Coffey
Located in New York, NY
Stylish pair of Kent Coffey nightstand tables in bleached walnut each having an upper shelf and one drawer. These night tables are in good, original condition, showing only normal co...
Category

Pair of Kent Coffey Perspecta Walnut Side Table or Nightstands

H 25 in. W 24 in. D 16.5 in.
Get Updated with New Arrivals
Save "Kent Coffey Nightstands", and we’ll notify you when there are new listings in this category.

How Much are Kent Coffey Nightstands?

Finding the Right Night Stands for You

Nightstands are traditionally designed with functionality in mind. Prior to the advent of indoor plumbing, early nightstands contained a porcelain chamber pot in a cabinet that provided a convenient and private alternative to visiting the outhouse. Today, antique, new and vintage nightstands — which are pieces of bedroom furniture that are often called bedside tables — are typically low-profile tables that are positioned alongside one’s bed or elsewhere in a bedroom.

A nightstand is mainly used to store or support objects that may be needed at night, such as a phone, a book or a small carafe of water. But this table can easily be personalized.

"I’ve got a huge vintage lamp, and when I’m lucky, I’ll have fresh flowers in a bud vase," Chicago interior designer Summer Thornton tells 1stDibs about styling a nightstand.

Whether you take a minimalist approach to bedside table decor or prefer to top it with stacks of books and other essentials that you'd like to have at arm's length — this furniture can also change the look and feel of a bedroom, rendering any interior more comfortable and cozy.

Practicality plays a prominent role in perfecting your bedside space, but the decision to furnish your bedroom with a cherrywood mid-century modern nightstand or an antique mahogany piece can have an impact on how you start your day.

Take the first step in setting the perfect tone of your morning — browse the wide selection of antique, new and vintage nightstands on 1stDibs now.