H 40.5 in. W 28.6 in. D 1.5 in.
KHOR LO LV
By Catherine Eaton Skinner
Located in Seattle, WA
"The power of the natural world, its intrinsic energy and fundamental properties, is dependent upon a fine balance. The balance of positive and negative forces resides from the smal...
Category

H 10 in. W 10 in. D 2.5 in.
The Earth LV
By Victoria Kovalenchikova
Located in Los Angeles, CA
Victoria Kovalenchikova’s artworks are an outlook at the transformation of the world surrounding us; a shout in the cold infinity of cosmos. It is an attempt to understand the impact...
Category 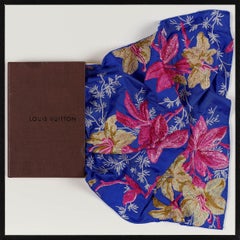 H 78.75 in. W 55.12 in.
Louis Vuitton Black Multicolore Monogram Canvas LV Cut Belt 90 CM
By Louis Vuitton
Located in Dubai, Al Qouz 2
Add a pop of color to your everyday style with this LV Cut belt from the house of Louis Vuitton. Crafted from monogrammed canvas, this chic black belt which is complete with a gold-t...
Category

Lv Black For Sale on 1stDibs

You are likely to find exactly the vintage or contemporary lv black you’re looking for on 1stDibs, as there is a broad range for sale. If you’re looking for an option in Black and you’re unable to find the right fit, there are plenty of variations in more. If you’re looking for a lv black from a specific time period, our collection is diverse and broad-ranging, and you’ll find at least one that dates back to the 20th Century while another version may have been produced as recently as the 21st Century. Finding an appealing accessory such as this — no matter the origin — is easy, but Louis Vuitton and Marc Jacobs each produced a popular version that is worth a look. Finding a lv black for sale for women should be easy, but there are 39 pieces available to browse for men as well.

How Much is a Lv Black?