H 44.1 in. W 78.75 in. D 0.04 in.
3C from The Last Photos
By George Barris
Located in Chatsworth, CA
This photograph of Marilyn Monroe was shot by photographer, George Barris, in 1962 at the North Hollywood home of Barris' close friend. Taken only two weeks before her death, this p...
Category

H 30 in. W 40 in.
"Tidal Wave," Photograph, circa 1975
By Michael DeCamp
Located in Long Island City, NY
This photograph was created by American artist and avid scuba diver Michael DeCamp. DeCamp's abstract photos have an enigmatic quality, and the interactions between shapes and colors...
Category

H 63.4 in. W 50 in. D 0.1 in.
Peace
By Caroline Durieux
Located in New Orleans, LA
Caroline Durieux created the technique (electron print) used in the depiction of Peace, a satirical take on how we seem to seek peace by bombing the hell out of countries This is #8 ...
Category

H 20 in. W 16 in.
Entrance BY KATIE HALLAM, Art of the Tate Modern, Limited Edition Photographic
By Katie Hallam
Located in Deddington, GB
Katie Hallam Entrance Digital Photograph The Turbine Hall inside Tate Modern London is a vast and exciting place where the contemporary, ambitious and controversial artists displa...
Category

H 35.44 in. W 27.56 in.
Photographic Portrait and Signature by Pietro Mascagni- 1903
Located in Roma, IT
Photographic printed portrait with autograph dedication signed and dated 25 V. 903 by the renowned Italian composer Pietro Mascagni (Livorno, 1863 - Rome, 1945). Mascagni was the au...
Category 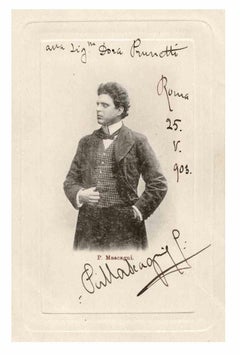 H 5.91 in. W 3.94 in. D 0.04 in.
Lorin Maazel - Vintage B/W Photographic Print - 1980s
Located in Roma, IT
Beautiful b / w photography of the "enfant prodige", great and prolific American conductor with over 300 recordings of the complete cycles of Beethoven, Brahms, Mahler, Sibelius, Rac...
Category

H 3.94 in. W 3.15 in. D 0.08 in.
Fashionable Virna Lisi - Vintage B/W Photographic Print - 1961
Located in Roma, IT
Fashionable Virna Lisi is an amazing vintage b/w photo of the Italian actress herself realized in 1961 by the famous Italian designer and photographer Willy Rizzo in the 60s. In goo...
Category

H 10.24 in. W 7.49 in. D 0.08 in.
Photographic Portrait and Signature of Van Cliburn - 1960s
Located in Roma, IT
Photographic portrait with autograph dedication signed of the American concert pianist Van Cliburn (Shreveport, 1934 - Forth Worth, 2013), winner of the prestigious International Tch...
Category

Photographic Portrait and Signature of Wilhelm of Sweden - 1910s, 1910s

H 7.09 in. W 9.45 in. D 0.04 in.
Albert Sabin Photographic Portrait and Dedication - 20th Century
Located in Roma, IT
Photographic portrait with autograph dedication signed by the Polish-American doctor, Albert Sabin. Albert Sabin (1906-1993) was the developer of the polio vaccine and president of ...
Category

H 11.82 in. W 16.74 in. D 0.04 in.
The Arrigoni collection, Esposizione Musicale Milanese - Photographic - 1881
Located in Roma, IT
The Arrigoni collection, Esposizione Musicale Milanese, is a photographic albumen print applied on cardboard. The print is made by coeval enlargement and applied on cardboard witho...
Category

H 10.24 in. W 8.08 in. D 0.04 in.
Wooden Lectern - Original Photographic Print - Early 20th Century
Located in Roma, IT
Wooden Lectern is a b/w photographic print on cardboard. The stamp of Foto Bohm applied on the rear. the artwork represents the Wooden Lectern of San Marco of Venice.
Category

H 10.24 in. W 7.88 in. D 0.08 in.
Lid of a Chest - Vintage Photographic Print - Early 20th Century
Located in Roma, IT
Lid of a Chest is a b/w photographic print on paper, the artwork represents the detail of a Lid of a Chest in Museo Nazionale of Florence. Coperchio in bronzo di una cassa is writte...
Category

How Much is a Modern Photographic Art?

The average selling price for a piece of modern photographic art we offer is $1,750, while they’re typically $111 on the low end and $70,000 for the highest priced.