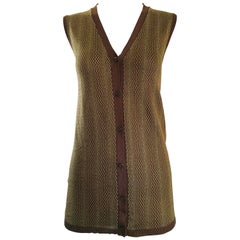 W 2.37 in. L 8.27 in.
Prada Cargo Backpack Nylon
By Prada
Located in New York, NY
These are professional pictures of the actual item offered by Rebag. Condition: Great. Minor wear and small marks on exterior and interior opening trim, bubbling on base, scratches ...
Category

H 9 in. W 13 in. D 5 in.
Prada Black Nylon Tote
By Prada
Located in Dubai, Al Qouz 2
Leave the house feeling trendy and confident with this Prada tote in hand. Crafted from nylon, with silver-tone hardware and nylon interiors, this bag is just the right size to compl...
Category

Prada Retro Wood Sunglasses
By Prada
Located in Fort Lauderdale, FL
Classic and timeless Prada sunglasses is a full rim unisex frame, which is made of metal. This model features a square shape, with a double bridge and nose pad. Logo is display on th...
Category

Size: One size
Prada Black Belted Coat S
By Prada
Located in Dubai, Al Qouz 2
A perfect choice to make a fashion statement, this black coat from Prada is sure to set hearts racing with its fabulous design and style. The coat is made of a blend of fabrics and f...
Category

Prada orange tulle dress
By Prada
Located in Capri, IT
Prada's latest runway collection featured glowing fluorescents contrasted with tweed and construction-inspired vests, with this tulle dress making its way into multiple looks. Made i...
Category

PRADA Men's Leather Clutch
By Prada
Located in Paris, FR
This refined Saffiano leather burgundy pouch is lined with monogram fabric with a zipped pocket. Label lodged inside. It can be worn by hand with a removable handle. The finishes are...
Category

Size: L
Prada Brown Suede Shoes
By Prada
Located in London, GB
A great pair of Prada shoes for Fall. The shoes are in brown suede with a leather sole and have punched detail on the front and back. They are size 38 with a 3 1/2 '' heel.
Category

Size: 38
Prada Textured Shoulder Bag
By Prada
Located in New York, NY
This Prada black textured shoulder bag has a flap including a buckle located at the bottom for added security. The straps can be adjusted if desire. Straps measures 58" at the longes...
Category

Prada 9 For Sale on 1stDibs

You are likely to find exactly the vintage or contemporary prada 9 you’re looking for on 1stDibs, as there is a broad range for sale. Black is a pretty popular color, but we also have Brown, Gray, Beige and more in stock now. If you’re looking for a prada 9 from a specific time period, our collection is diverse and broad-ranging, and you’ll find at least one that dates back to the 18th Century while another version may have been produced as recently as the 21st Century. There aren’t many items for men if you’re seeking these accessories, as most of the options available are for women and unisex.