H 17.72 in. Dm 17.72 in.
Round Cast Stone Top Metal Base Coffee Table
Located in Great Barrington, MA
Organic cast stone top with leaf design on contemporary cast iron metal base coffee table. Wonderful patina. Great to use indoor or outdoor on porch patio or in the garden. Measures...
Category

H 19 in. Dm 32.5 in.
Gilded Metal Patina Effect and White Marble Round Coffee Table
Located in Tourcoing, FR
Gilded pattina effect metal and white marble round and design coffee table compose of a sculptural and geometric base adorned with a round and removal white marble tray. New item, ne...
Category 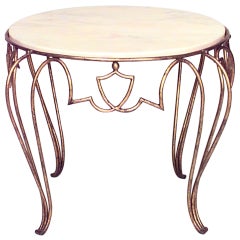 H 21.5 in. Dm 31.5 in.
Janni Van Pelt Round Coffee Table in White Metal and Glass
By Janni Van Pelt
Located in Waalwijk, NL
Janni Van Pelt, coffee table, glass and white metal, the Netherlands, circa 1958. Round coffee table in white coated metal and glass designed by Janni van Pelt. This table is a vari...
Category

Round Glass and Chrome Metal Adjustable Coffee Table, Italy, circa 1980

H 20 in. W 41.75 in. D 41.75 in.
Teti Round Coffee Table
By Domingo
Located in Milan, IT
Brimming with luxe appeal, this round coffee table boasts an airy silhouette inspired by Thetis, the most beautiful of the Nereids nymphs and goddess of the seas and metamorphoses. T...
Category

H 12.6 in. W 31.5 in. D 31.5 in.
Little Table Yuki 0128, Metal Frame, Round, Color, Design, Coffee Table, Wood
By EP Studio
Located in MARANO VICENTINO, IT
Whether it’s square, rectangular, oval or round, Yuki Little Table comes in several shapes, sizes and finishes. The painted metal base in standard or special colours can be combined ...
Category

H 17.72 in. Dm 19.69 in.
Medium Round Coffee Table
By Cipriani Homood
Located in Milan, IT
A simple and versatile construction that is captivating and bold, this coffee table boasts a sleek profile raised on a tripod-shaped metal base with the central rod extending through...
Category

H 19.69 in. W 21.26 in. D 21.26 in.
Little Table Yuki 0128, Metal Frame, Round, Color, Design, Coffee Table, marble
By EP Studio
Located in MARANO VICENTINO, IT
Whether it’s square, rectangular, oval or round, Yuki Little Table comes in several shapes, sizes and finishes. The painted metal base in standard or special colours can be combined ...
Category

H 17.72 in. W 27.56 in. D 27.56 in.
Line Round Coffee Table
By Tremolada
Located in Milan, IT
Completely personalizable, the line round coffee table comes from a collection of simple, elegant pieces with a chrome finish. Shown here with a glass top with a black coating of var...
Category

H 13.78 in. W 31.5 in. D 31.5 in.
Midcentury White Varnished Metal Coffee Table with Round Glass Top, Italy 1950s
Located in Bresso, Lombardy
This coffee table has a varnished metal structure and features a round glass top. It can also be used outside, as part of a lawn furniture. It might show slight traces of use sin...
Category

H 20.08 in. Dm 38.19 in.
Kart Round Coffee Table
Located in Paris, FR
Coffee table Kart round with metal structure in bronzage finish. With down top in solid ash wood and upper top in rock. End of the feet are in brushed bronzed brass.
Category

H 17.33 in. Dm 47.25 in.
Round Coffee Table with a Bar Refrigerator Etched Metal by Heinz Lilienthal 60s
By Heinz Lilienthal
Located in Frankfurt / Dreieich, DE
Coffee table with etched metal and an integrated bar, fridge in the middle, 1960s. The table has two metal flaps in the middle, one for the refrigerator, one for glasses Very good...
Category

New Round Coffee Table with Metal Structure and Glass Top

H 13.78 in. Dm 43.31 in.
Round Balloon Coffee Table, Gold
By Duffy London
Located in London, GB
The UP balloon coffee table is a playful trompe l’oeil furniture piece. A series of shimmering, polished metallic balloons impresses the illusion of a levitating glass tabletop. A...
Category

1970s Round Coffee Table in Chromed Metal and Acid-Worked Glass

H 16.93 in. Dm 43.31 in.
Seline Large Round Coffee Table
By Ulivi Salotti
Located in Milan, IT
This elegant round coffee table will be the focal point of an elegant living room. Its timeless allure comes from the harmonious combination of precious materials, sophisticated fini...
Category

H 13.78 in. Dm 47.25 in.
Live-Edge Round Coffee Table
Located in Brooklyn, NY
This unique live-edge coffee table has a truly one-of-a-kind shape with a natural wooden top. The table's metal base complements the unique top. Please confirm item location with sel...
Category

H 13.78 in. Dm 31.5 in.
Extraordinary Round Green Marble Coffee Table
Located in Vlimmeren, BE
This exclusive round green marble coffee table can be dated in the 1970s. It was bought in the Netherlands by the previous owners. Unfortunately we don’t know the designer and produ...
Category

H 11.82 in. Dm 53.15 in.
Adjustable-Height Round Teak Coffee Table
Located in Dorchester, MA
This Danish table has a round teak top on a four-star pedestal base. The height easily adjusts from 16.25 inches to 26.5, allowing it to be used as a small coffee table or as a side ...
Category

H 16.25 in. Dm 30.50 in.
Modern Leather Wrapped Round Coffee Table
Located in Westwood, NJ
A modern leather-wrapped glass top round coffee table. The sleek glass top sits on metal legs covered in antique leather with brass details. The brass details on the sides give this ...
Category

H 15.75 in. Dm 31.5 in.
Blake Round Coffee Table with Oakwood Top
By Bodema
Located in Milan, IT
A superb addition to both a modern or Classic decor, this coffee table exudes impeccable craftsmanship. Marked by clean, Minimalist lines, this piece is composed of a metal tripod ba...
Category

H 16.15 in. Dm 39.38 in.
Round, Balloon Coffee Table in Gold & Black
By Duffy London
Located in London, GB
The UP Balloon coffee table is a playful trompe l’oeil furniture piece. A series of shimmering, polished metallic balloons impresses the illusion of a levitating glass tabletop. A...
Category

H 15.75 in. W 31.5 in. D 47.25 in.
Unique Modern Round Coffee Table with Metal Inlay and Copper Legs Made to Order
By Renats Kotlevs
Located in Riga, LV
This luxury coffee table Organ combines rich wood with bright copper legs. The oiled finish is wonderfully smooth to the touch and looks fantastic. A copper inlay is carefully embedd...
Category

H 17.72 in. Dm 35.44 in.
Wire and Glass Round Coffee Table 80s
Located in Amstenrade, NL
Wire coffee table 80s. Grey metal wire base with round glass top. Some scratches of use on the glass, rest in very good vintage condition.
Category

H 16.15 in. Dm 35.44 in.
Blake Round Coffee Table with Calacatta Marble Top
By Bodema
Located in Milan, IT
An exquisite combination of textures and materials, this stunning coffee table is an example of refined, impeccable craftsmanship. Resting on a metal base with a matte pewter finish,...
Category

H 13 in. Dm 27.56 in.
Round Metal Pedestal Marble Top Table After Arthur Umanoff
By Arthur Umanoff
Located in Wilton, CT
Round coffee/cocktail table after Arthur Umanoff in black wrought iron metal with original travertine top. Generously sized, it could easily lend itself to an alternative dining tabl...
Category

H 22 in. Dm 46 in.
Round Coffee Table by Pierre Paulin for Artifort
By Pierre Paulin, Artifort
Located in Oud Beijerland, NL
Very nice round coffee table, designed by Pierre Paulin in the 60's. The name of the table is "Circle" and it is manufactured by Artifort in the 2004. This high quality table...
Category

Round Coffee Table by Pierre Paulin for Artifort

H 13.78 in. Dm 35.44 in.
Italian Side Tables in Metal and Round Granite Tops
Located in Waalwijk, NL
Side tables, granite, metal, brass, Italy, 1980s These side tables feature a grey or red/brown tabletop in round or rectangular format. The granite shows a vivid surface. A brass ...
Category

Italian Side Tables in Metal and Round Granite Tops

H 23.82 in. Dm 25.79 in.
Italian Side Table in Metal and Round Granite Tops
Located in Waalwijk, NL
Side table, granite, metal, brass, Italy, 1980s This side table features a grey or red/brown tabletop in round or rectangular format. The granite shows a vivid surface. A brass pe...
Category

Italian Side Table in Metal and Round Granite Tops

Round Coffee Metal For Sale on 1stDibs

How Much is a Round Coffee Metal?

A round coffee metal can differ in price owing to various characteristics — the average selling price 1stDibs is $2,450, while the lowest priced sells for $213 and the highest can go for as much as $32,353.

As a practical centerpiece to your living area, antique and vintage coffee and cocktail tables are an invaluable addition to any interior.