H 29.75 in. W 28.75 in. D 31 in.
Gesture Upholstered Lounge Chair in Leather and Black Oak by Hans Olsen
By Hans Olsen
Located in Viby J, DK
Now the distinctive 1950s Gesture design is also available as a sculptural lounge chair. The popular molded design was the brainchild of the renowned Danish architect Hans Olsen, who...
Category 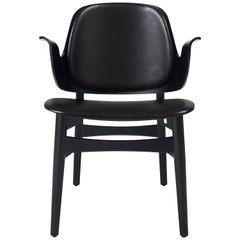 H 29 in. W 28.25 in. D 25.50 in.
Danish Kurt Ostervig Chair
Located in Los Angeles, CA
This Kurt Ostervig Danish-style lounge chair has been completely restored and upholstered in new red fabric. The chair features new comfortable foam inserts on the back, armrests, an...
Category

H 31.7 in. W 25.79 in. D 27.96 in.
Siesta Lounge Chair by Jio Möbler, Sweden
By Jio
Located in Alvesta, SE
Rare lounge chair and ottoman from Jio Möbler in Jönköping, Sweden, circa 1960. This chair is sold as renovation object since the upholstery of sheepskin is broken and need a new ...
Category

H 31 in. W 26.75 in. D 32 in.
Tearoom Lounge Chair, Kvadrat's "Savanna" 0202 ‘Cream’
By Norm Architects
Located in San Marcos, CA
Available May 2019. The Tearoom lounge chair and Tearoom sofa join the Tearoom club chair to complete the leisure experience in a multitude of settings, from exclusive hotels, clu...
Category

H 28.35 in. W 89.76 in. D 35.43 in.
Tearoom Sofa, Kvadrat's "Savanna" 0202 (Cream)
By Norm Architects
Located in San Marcos, CA
The Tearoom lounge chair and Tearoom sofa join the tearoom club chair to complete the leisure experience in a multitude of settings, from exclusive hotels, clubs and lounges to priva...
Category

H 27.17 in. W 27.56 in. D 27.17 in.
Folke Ohlsson Lounge Chair for DUX
By Folke Ohlsson, Dux of Sweden
Located in Los Angeles, CA
Comfortable lounge chair designed by Folke Ohlsson for DUX of Sweden in Sweden, circa 1950s. Featuring a solid walnut wood frame with five vertical slats in the open back that provid...
Category

H 28 in. W 27 in. D 28 in.
Danish Modern Lounge Chairs Design by Finn Juhl
By Finn Juhl
Located in Oakland, CA
Pair of lounge chairs designed by Finn Juhl for France & Daverkosen, Model133.Teak frame with curved arms and original coil spring supports under the seat and back. Newly upholstered...
Category

H 40 in. W 30 in. D 32 in.
Danish Modern Z Lounge Chairs by Poul Jensen for Selig
By Selig, Poul Jensen
Located in Southampton, NJ
A classic and smart design by Poul Jensen. The Z chair is a standout amongst the Danish modern lounge chairs having stunning, sharp lines and a perfectly angled backrest. Own this pa...
Category

H 27 in. W 30 in. D 31 in.
Pulkka Lounge Chair by Ilmari Lappalainen for ASKO, Finland, 1963
By Asko, Ilmari Lappalainen
Located in Frankfurt / Dreieich, DE
Ilmari Lappalainen lounge chair with Ottoman, Pulkka, designed in 1963 and made by Asko. Aluminium base and chocolate brown leather. The Seating is adjustable. Excellent condition...
Category

H 26.50 in. W 30 in. L 26.50 in.
Ib Kofod-Larsen Reclining Lounge Chair and Ottoman for Selig
By Selig, Ib Kofod-Larsen
Located in San Francisco, CA
A high back reclining lounge chair and ottoman in elm, designed by Ib Kofod-Larsen for Selig. Quintessential Danish modern design and comfort, with a discreet side lever that allo...
Category

Pair of Danish Lounge Chairs with Footstool by Børge Mogensen

Leather and Teak Lounge Chair with Ottoman by K. Rasmussen for Peter Wessel

H 29.14 in. W 27.96 in. D 30.32 in.
3 Piece Set of Folke Ohlsson for DUX Lounge Chairs and Ottoman *SATURDAY SALE
By Folke Ohlsson, Dux of Sweden
Located in San Francisco, CA
An exceptional set of complementary upholstered Folke Ohlsson pieces for DUX, comprised of one lounge chair and one rocker with matching ottoman. All three pieces exhibit sculptur...
Category

How Much are Scandinavian Foam Lounge Chairs?

While this specific seating is known to all for its comfort and familiar form, the history of how your favorite antique, new or vintage lounge chair came to be is slightly more ambiguous.

Although there are rare armchairs dating back as far as the 17th century, some believe that origins of the first official “lounge chair” are tied to Hungarian modernist designer-architect Marcel Breuer. Sure, Breuer wasn’t exactly reinventing the wheel when he introduced the Wassily lounge chair in 1925, but his recliner was indeed revolutionary for its integration of bent tubular steel.

The Eames lounge chair, on the other hand, has come to define somewhat of a universal perception of what a lounge chair can be. Introduced in 1956, the Eames lounge (and its partner in cozy, the ottoman) quickly became staples in television shows, prestigious office buildings and sumptuous living rooms. Venerable American mid-century modern designers Charles and Ray Eames intended for it to be the peak of luxury, which they knew meant taking furniture to the next level of style and comfort. Their chair inspired many modern interpretations of the lounge — as well as numerous copies.

On 1stDibs, find a broad range of authentic lounge chairs that includes everything from antique Victorian-era seating to vintage mid-century modern lounge chairs by craftsmen such as Hans Wegner to contemporary choices from today’s innovative designers.