H 9.6 in. W 4.5 in. D 4.9 in.
Lalique Gorilla Figure/Sculpture in Black Crystal
By Lalique
Located in New York, NY
Inspired by the fauna of the jungle, new wild animal sculptures have been added to the Lalique bestiary. The purity of the satin-finished and polished crystal, the brand's hallmark, ...
Category 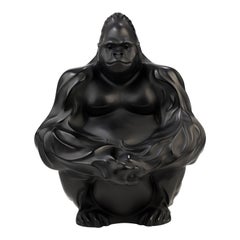 H 19.75 in. W 4 in. D 4 in.
19th Century Italian Monumental Signa Terracotta Venere Figure Renassance Style
Located in Firenze, IT
Elegant sculpture in terracotta from Signa, a manufacture existing in the 19th century near Florence. The sculpture represents a Vanere dressed in a Roman Toga, a Classic Renaissanc...
Category

H 3.75 in. W 7.25 in. D 2.25 in.
Petite Statue Figure of the Nuremberg Water Fountain Goose Man Antique Souvenir
Located in Nürnberg, DE
A beautiful metal figurine of the goose man, a statue in the middle of a water fountain in Nuremberg, Germany. Some wear with a nice patina, but this is old-age. Made of metal. A bea...
Category

H 22 in. W 16 in. D .25 in.
Large Figural Study in Pencil
Located in Kilmarnock, VA
A large, dramatic and detailed pencil sketch of a fallen warrior recently framed and matted under museum glass. Signed and dated 1847, Poland.
Category

H 23.25 in. W 19.25 in. D .88 in.
Small Bronze Figure Study After Eric Goulder
Located in Los Angeles, CA
probably an early study cast bronze engraved name on the side, which appears to be misspelled probably from an apprentice or other ?
Category

H 10 in. W 3.5 in. D 3.5 in.
Jiri Anderle, Czech B. 1936, Figure Study, Extra Large
By Jiří Anderle 2
Located in Atlanta, GA
Framed, signed and numbered print by Jiri Anderle. Jiri Anderle is a Czechoslovakian painter and graphic artist best known for his delicate and ghostly etchings of the human form. Wo...
Category

H 4.25 in. W 3.75 in. D 0.1 in.
Geometric Matched Minimal Console Oak Table
By Figure Ground
Located in Brooklyn, NY
The artifact console table welcomes you home and defines your itinerary when leaving. It holds that beautiful scarf next to the rare book that guests flip through when they visit. Ha...
Category

H 31 in. W 72 in. D 24 in.
Antique Decorative Figure, Oriental, Bronze, Statue, Study, Musician, circa 1900
Located in Hele, Devon, GB
This is an antique decorative figure. An Oriental, bronze statue or study of a musician, dating to the late 19th century, circa 1900. Diminutive and superbly weathered Displaying...
Category

H 5.71 in. W 3.94 in. D 2.96 in.
Geometric Minimal Console Hardwood Table
By Figure Ground
Located in Brooklyn, NY
The artifact console table welcomes you home and defines your itinerary when leaving. It holds that beautiful scarf next to the rare book that guests flip through when they visit. Ha...
Category

H 31 in. W 72 in. D 24 in.
Antique Bull Figure, Austrian, Bronze, Study, Statue, 19th Century, circa 1900
Located in Hele, Devon, GB
This is an antique bull figure. An Austrian, bronze study or statue, dating to the late 19th century, circa 1900. Striking anatomical study of a powerful animal Displaying a desi...
Category

H 6 in. W 11 in. D 6 in.
English Bulldog Figure
Located in West Palm Beach, FL
This stylish and charming figure of a bull dog dates to the 1960s-1970s and was created in Italy. The piece is made of ceramic and hand painted by an artisan. Note: Marked Italy ...
Category

H 9.75 in. W 6.25 in. D 5 in.
Steel Figural Sculpture
Located in Los Angeles, CA
Sculptural metal stick figure. At just under 5 feet tall, this unique piece of art is like cross walk sign come to life. The right hand has a cup to place keys or miscellaneous items...
Category

Figure of a Bacchante

H 16 in. Dm 3 in.
Figural Shooting Target
Located in Los Angeles, CA
Super cool heavy metal shooting target. Figure of a man is attached to a metal stake that drives into the ground. Figure is on a hinge so when you hit the target, the figure tilts ba...
Category

H 43.5 in. W 7.25 in. D 2 in.
Victorian Marble Figure
Located in Manchester, GB
An attractive marble figure of a young girl posing in a rather coy manner seated on a grained marble cushion. The marble pedestal is octagonal at the base then turned on to fluting, ...
Category

H 54.73 in. W 14.57 in. D 13 in.
Alabaster Figure Spinario
Located in Cheshire, GB
Alabaster sculpture, Spinario statue of a boy with a thorn in his foot on a yellow Scagliola pedestal. He is based on an antique bronze original which is in the Capitoline Museum Rom...
Category

Republic of Mali Terracotta Figure of a Female Ancestral Figure

H 10.5 in. W 5 in. D 4.5 in.
Mythological Figure Bronze
Located in Madrid, ES
A circular base slightly elevates the bronze figure. The man, already of a certain age (as can be deduced from his bushy beard), is standing, dressed in a cloth around his waist, wea...
Category

H 23.23 in. W 11.03 in. D 11.03 in.
Steuben Rabbit Figure
Located in Pasadena, CA
This is a charming Steuben mid-20th century representation of a duck or duckling. The duck is in overall condition and no faults were noted. Signed on bottom.
Category

H 8.5 in. W 2.5 in. D 2.5 in.
French Figural Statue
By Mathurin Moreau
Located in New Orleans, LA
This extraordinary and monumental cast-iron sculpture was likely specially commissioned to the Fonderies d'Art du Val d'Osne for an important public or private collection. Designed b...
Category

Figure Studies For Sale on 1stDibs

How Much are Figure Studies?