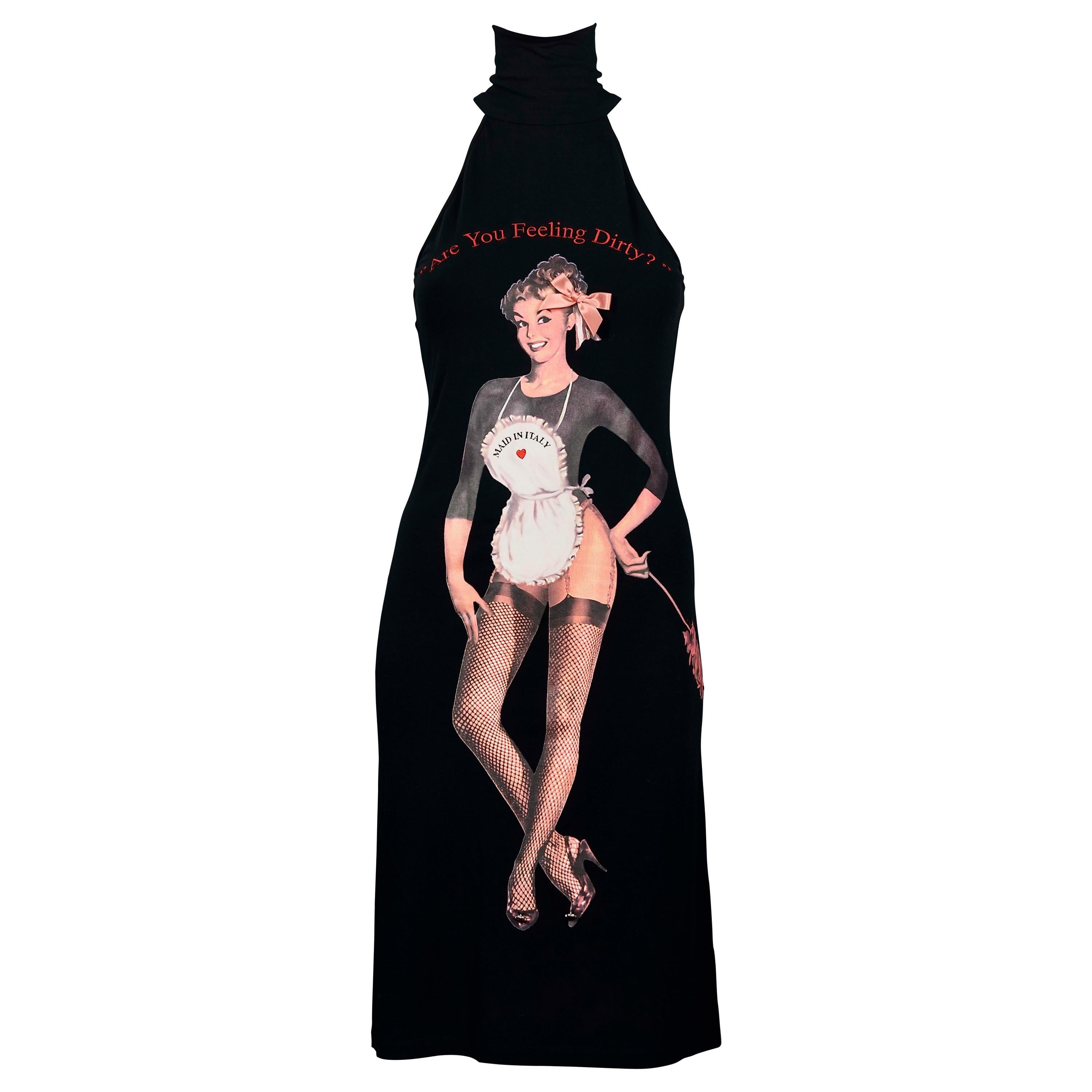 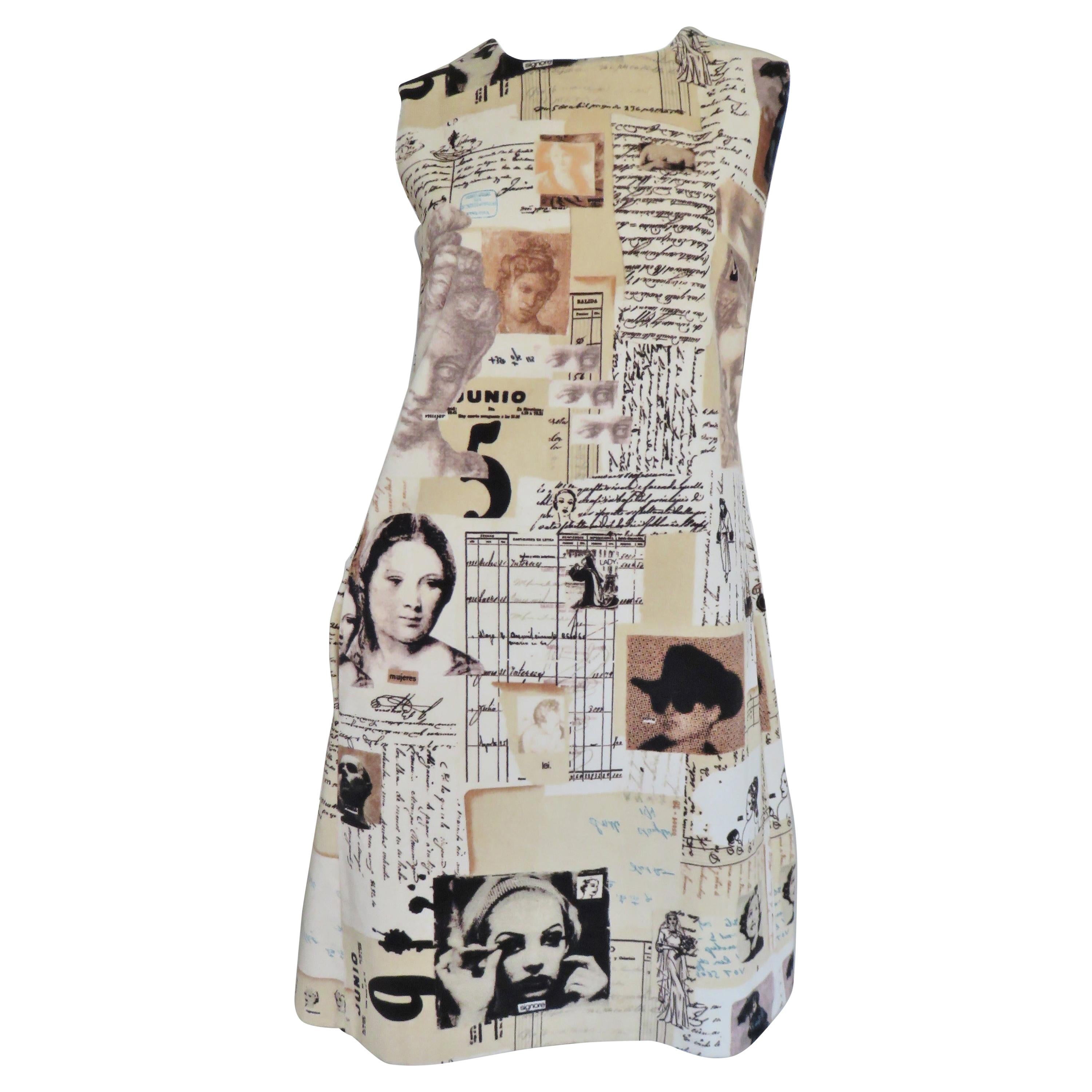 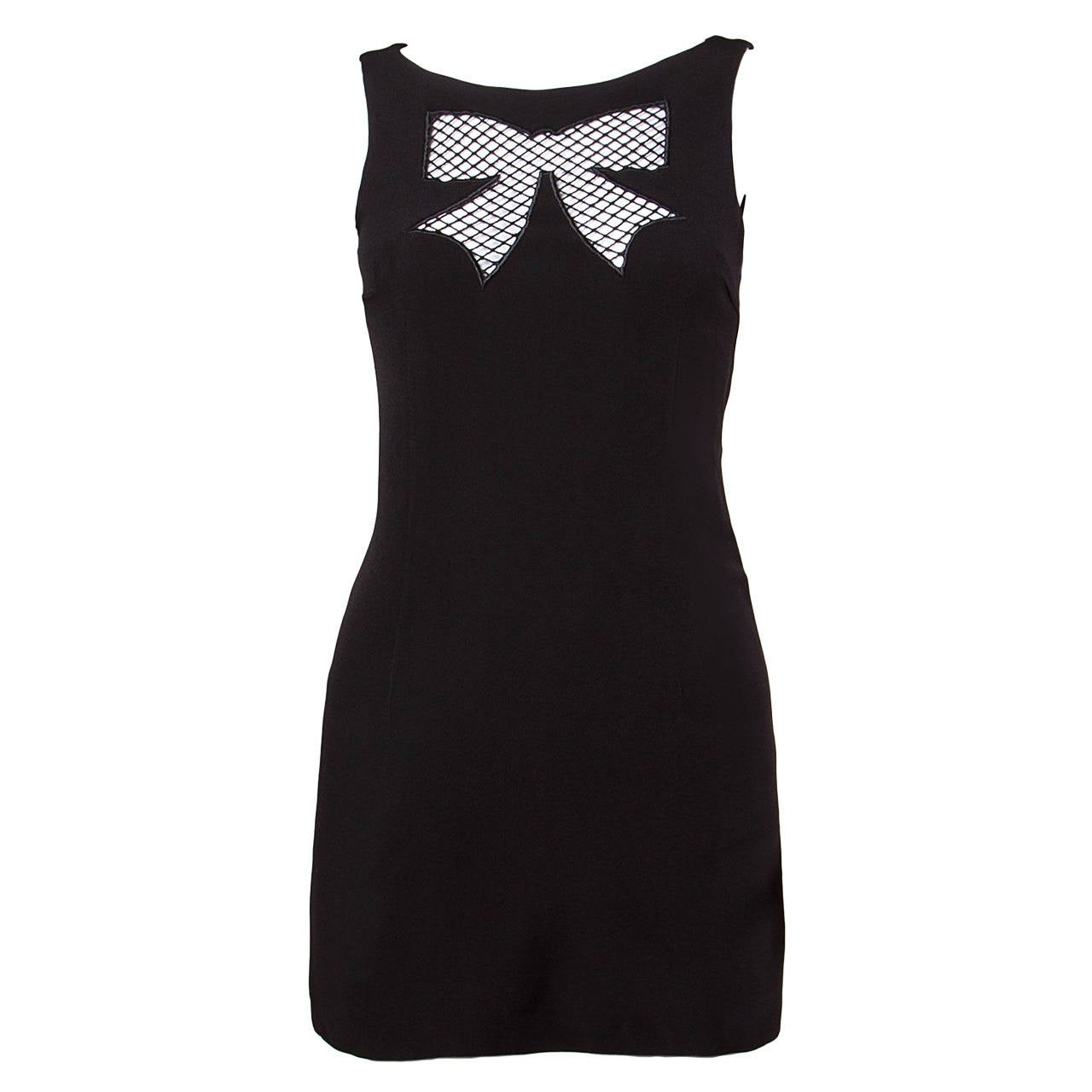 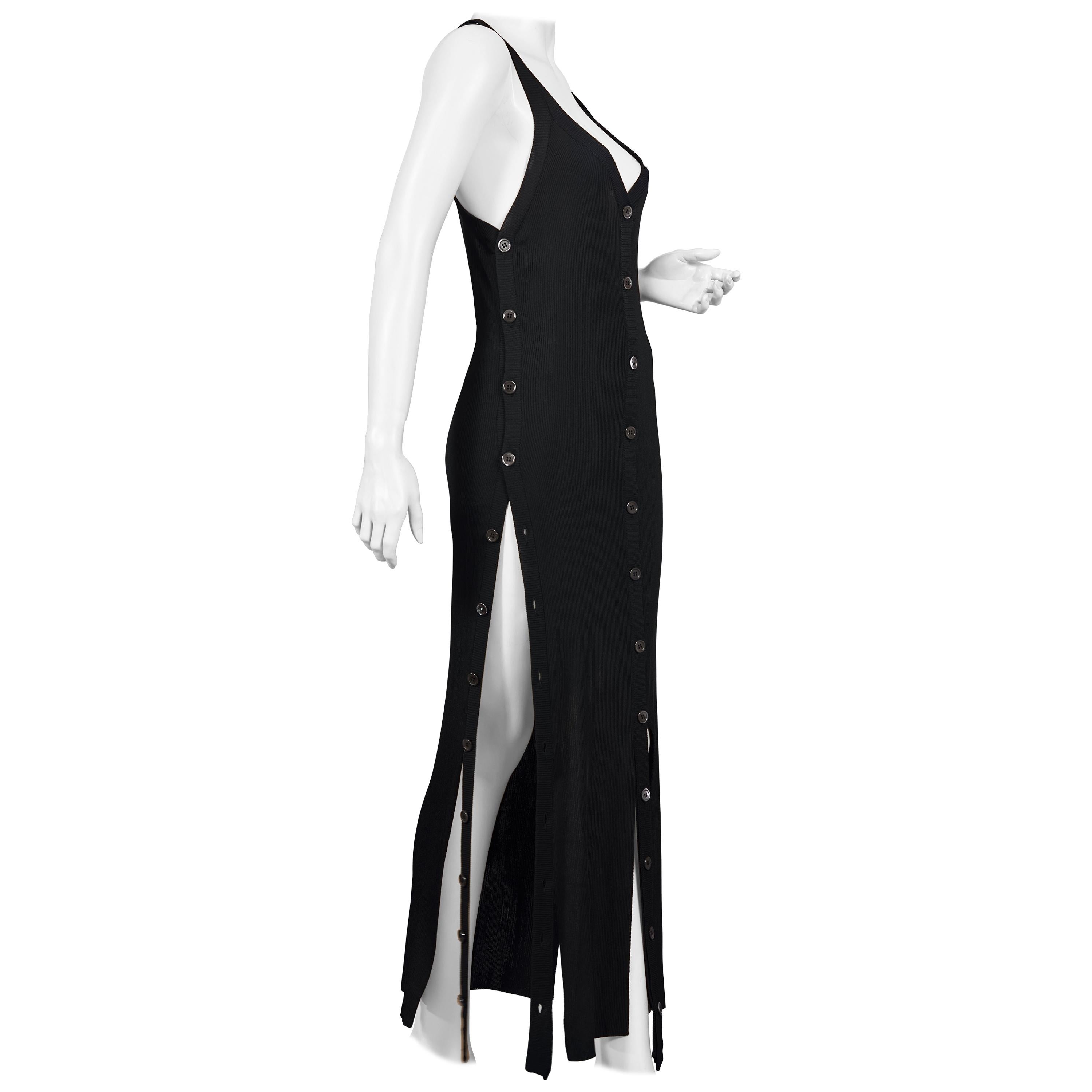 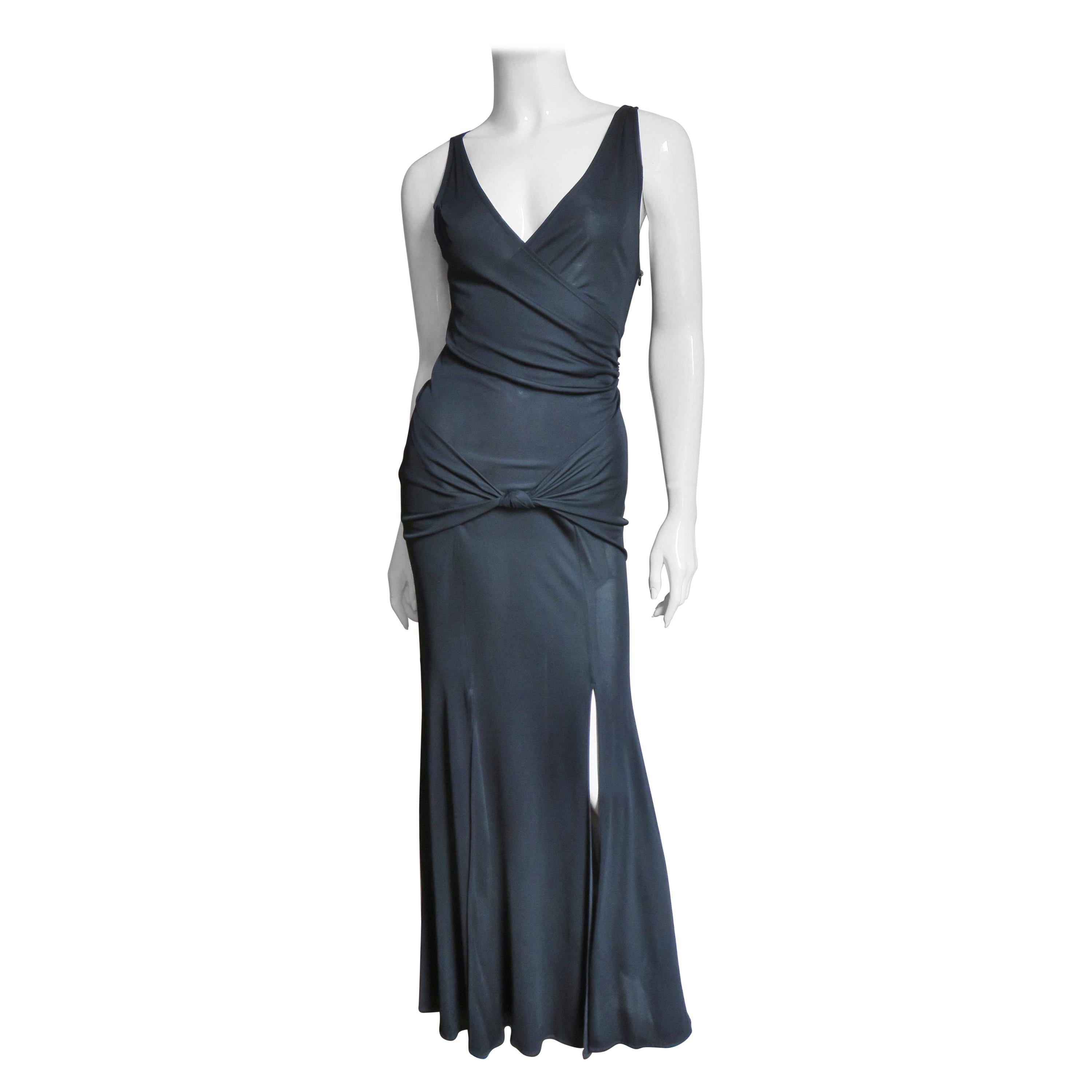 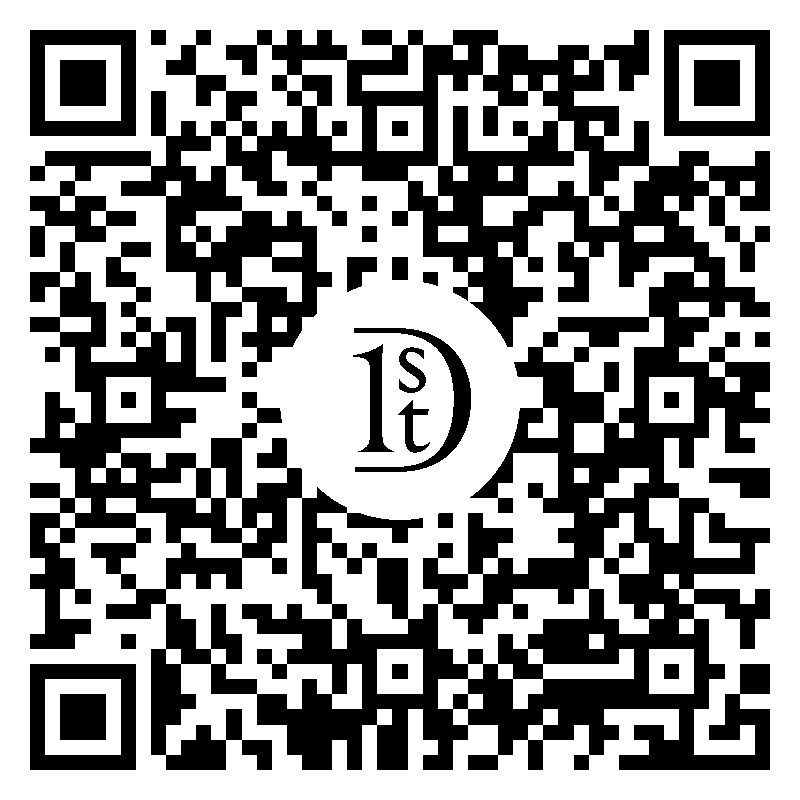 A fabulous black dress lined in orange with a sheer letter pattern from Moschino. It is a sleeveless semi fitted A line dress with a scoop neckline. The dress is lined in orange and has a back zipper. Fits sizes Small, Medium. Bust 36" Waist 31" Hips 37" Length 34" 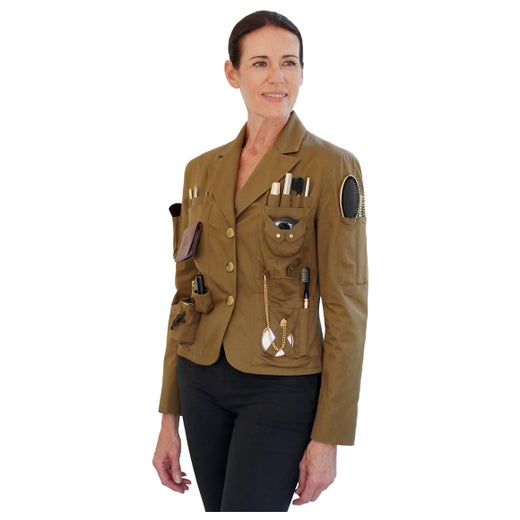 The Moschino story begins in the early 1980s, when Franco Moschino (1950–94), a freelance magazine illustrator and Gianni Versace collaborator, founded a label in Italy whose ethos was all about having fun.

Moschino initially pursued a degree in painting at Milan Academy of Fine Arts during the late 1960s, turning to freelance illustration to help pay his way through school. He found inspiration in Pop art, Dadaism and bold graphics. During the 1970s, he began to work for Gianni Versace’s now-legendary house as a sketcher and freelanced as a clothing designer with other fashion labels. In 1983, encouraged by Versace, he launched his own extravagant and excessive couture collection.

Moschino’s expertly tailored, vibrant designs for casual wear and more, each adorned with loud, playful details, spoofed the chic high fashion of the day, and his close relationship with fine art — as well as his eye for innovation — welcomed comparisons to Elsa Schiaparelli over the years. The label’s work essentially mocked the industry even as its hand fed Moschino, with the founder emblazoning shirts with slogans such as “Good taste doesn’t exist” or embroidering jackets with the phrase “Waist of money,” while the theatrical shows were positioned with an undercurrent of critique. Today, the Metropolitan Museum of Art holds two vintage Moschino handbags in its collection: one shaped like a milk carton and the other an iron.

“Under all the surface witticisms, [Moschino] had a serious knack for running class pieces through a wringer of irony or Surrealism,” observed Vogue. “Chanel-isms were his favorite trope, though he also poked fun at Jean Paul Gaultier’s lingerie dressing and put out pasta bags in a parody of the Prada accessories craze.”

Accessories, jeans and the first men’s collection were presented at the Regal Palace in Milan in 1985, with his Moschino Jeans womenswear collection following in 1986. Then Moschino released Moschino for Women, its first fragrance, the next year in Europe. In 1988, long before brands had considered the concept of a spin-off, Moschino bowed its cheeky diffusion line for men and women, Moschino Cheap & Chic, during the shows in Milan. The label thrived, adding its first stores in Italy and campaigning for eco-friendly fur. Its retrospective-slash-fashion-show “X Years of Kaos” in the early 1990s benefited a children’s AIDS organization.

After Moschino’s untimely death at the age of 44 from AIDS complications, Rossella Jardini, his longtime friend and colleague, took the reins. She carried the torch for nearly 20 years, adding eyewear, watches and jewelry. American designer Jeremy Scott was named creative director in 2013.

Scott, who grew up on a farm and once unveiled a collection of evening dresses charred with burn marks, imbues all his work with a message of inclusion, be it his Fast Food collection in 2014 (hot dog dress included) or Moschino Barbie. “I don’t care if the critics don’t like me,” Scott told Vogue. “I want to be the people’s designer, like Diana was the people’s princess.”

About the Seller
4.9 / 5
Located in Water Mill, NY
Platinum Seller
These expertly vetted sellers are 1stDibs' most experienced sellers and are rated highest by our customers.
Established in 2005
1stDibs seller since 2013
596 sales on 1stDibs
Typical response time: <1 hour
More From This Seller

Vintage MOSCHINO CHEAP and CHIC "Are You Feeling Dirty" Dress