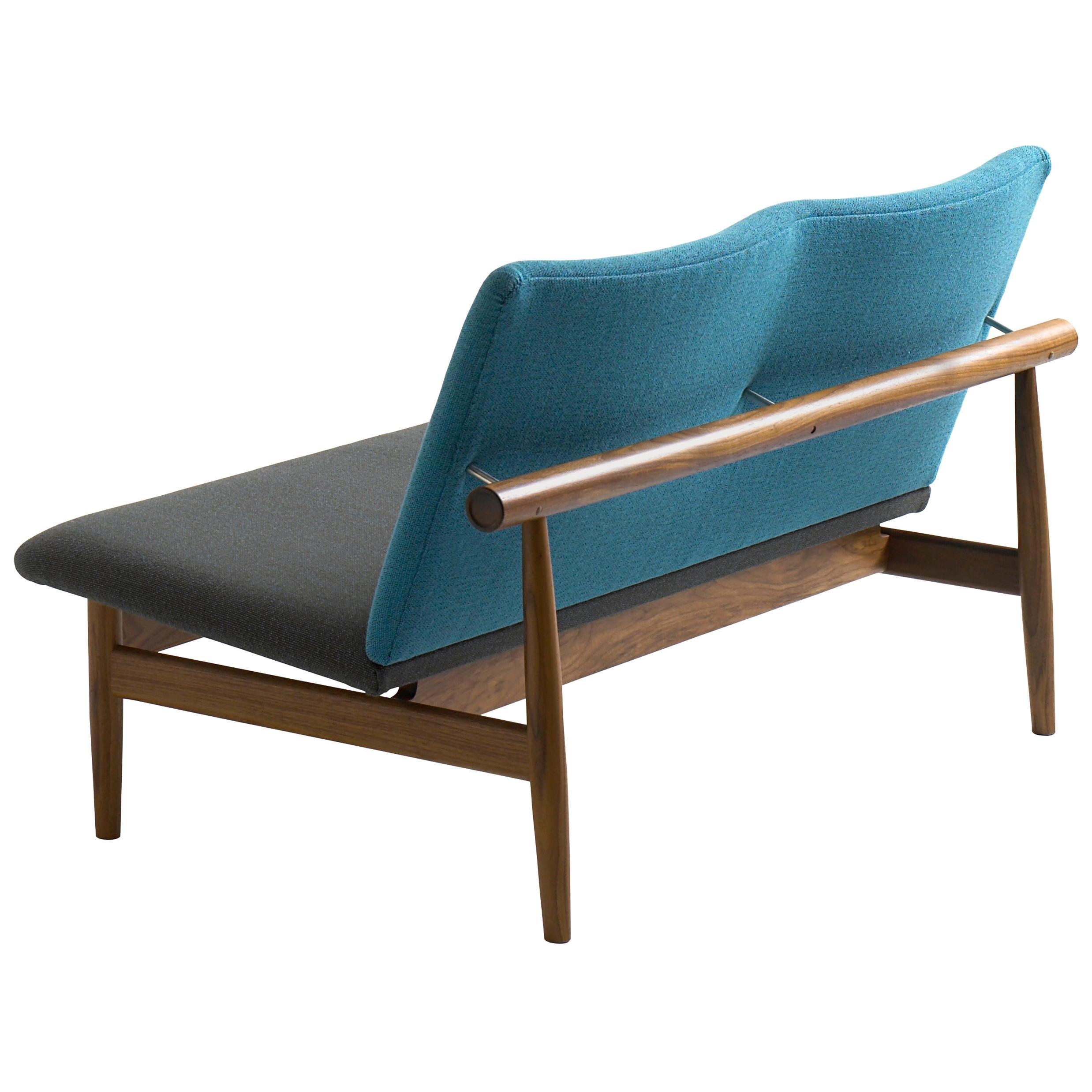 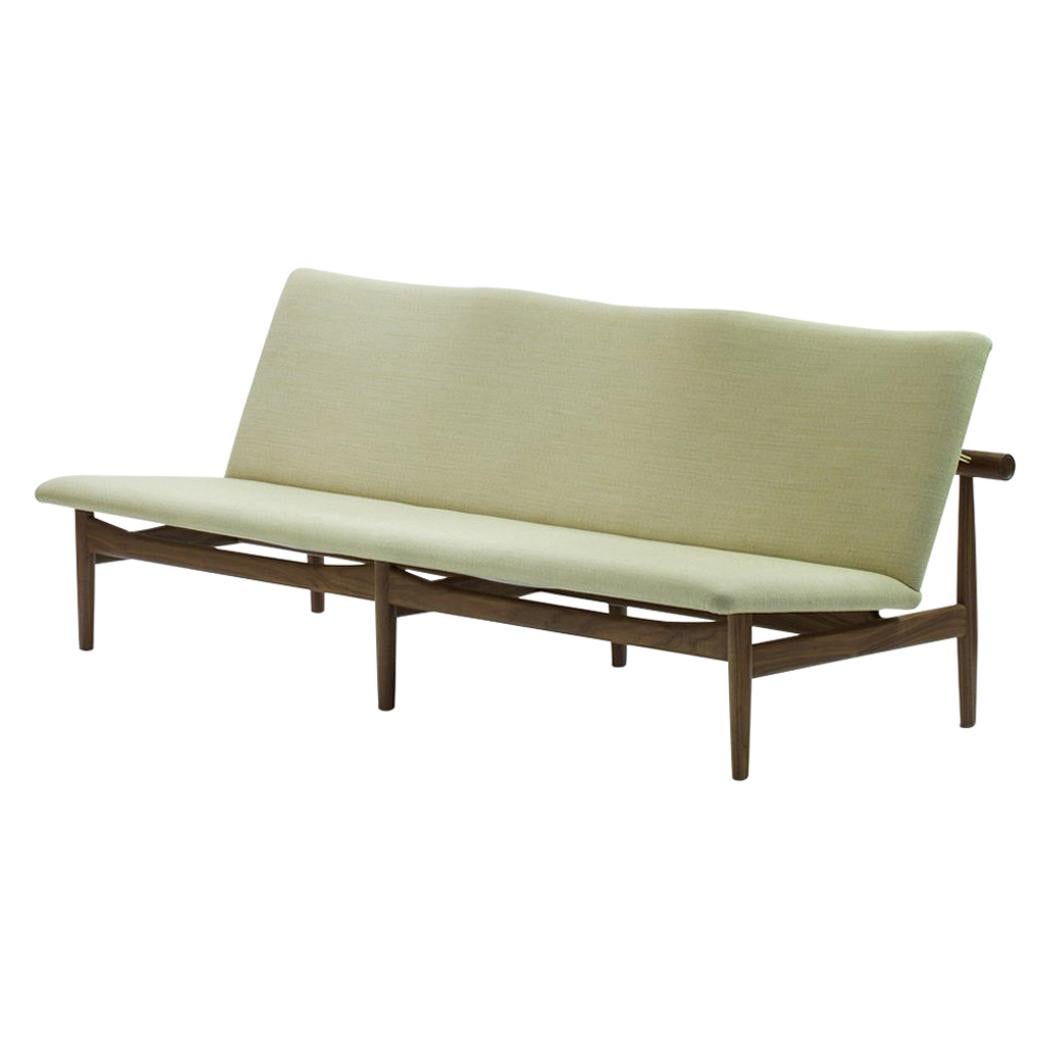 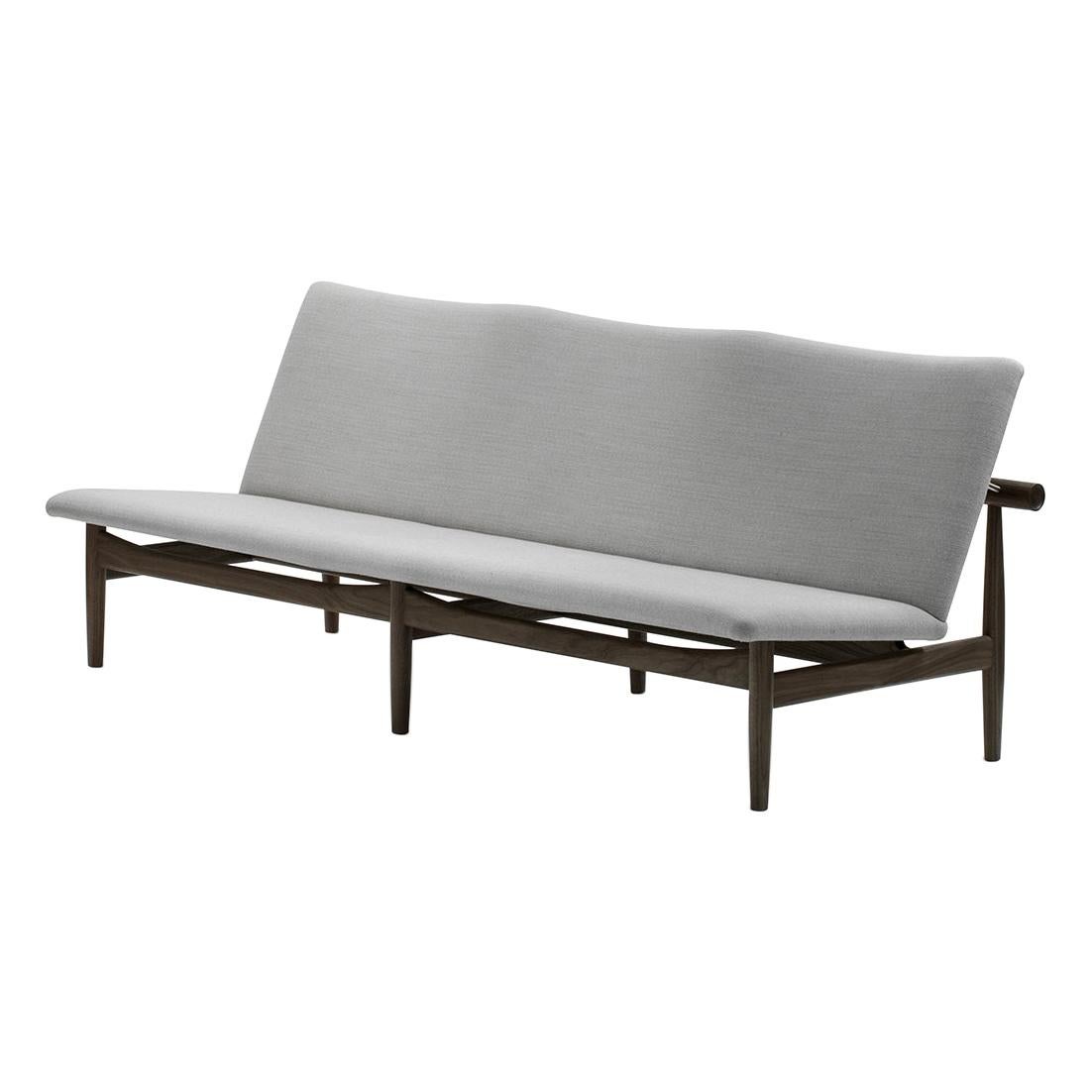 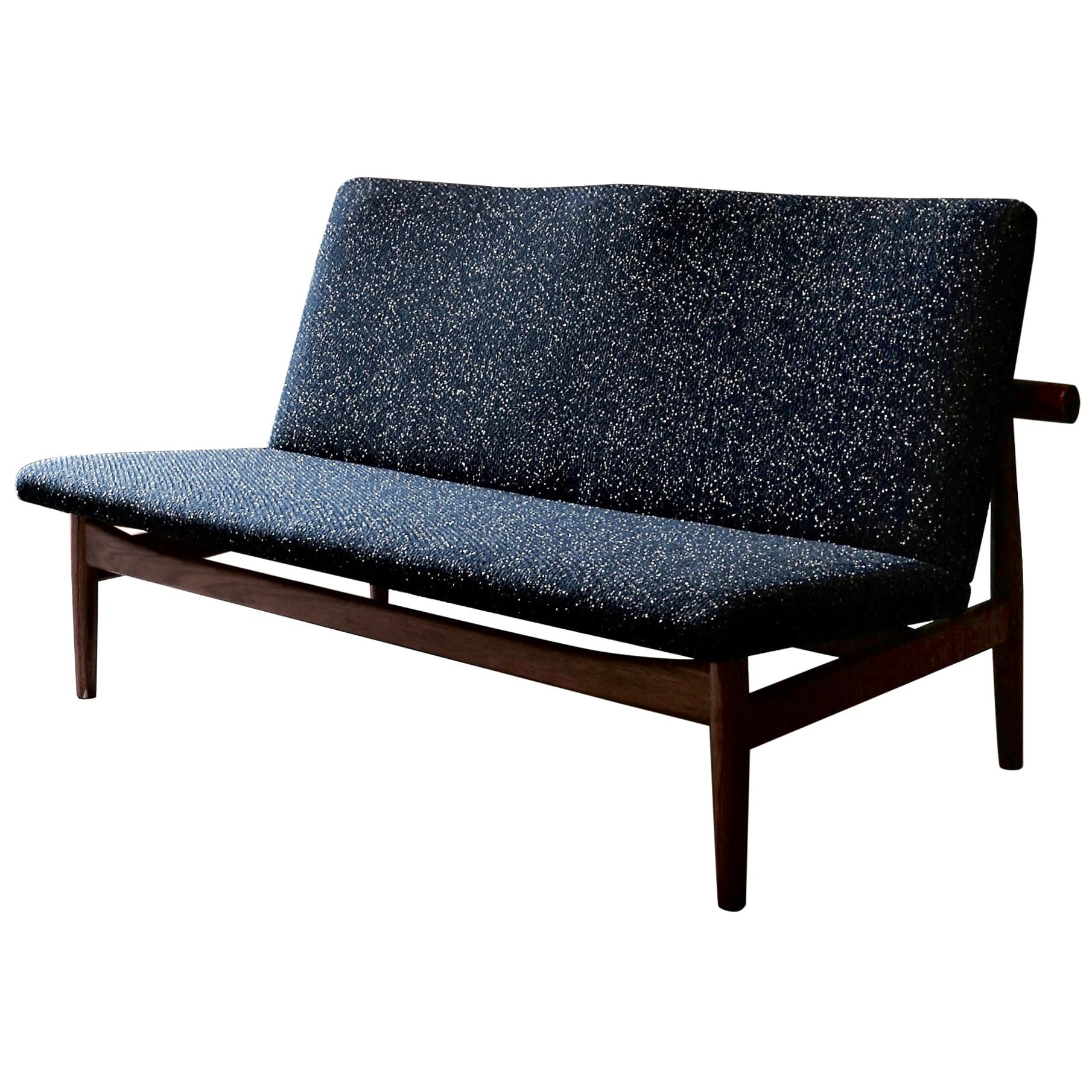 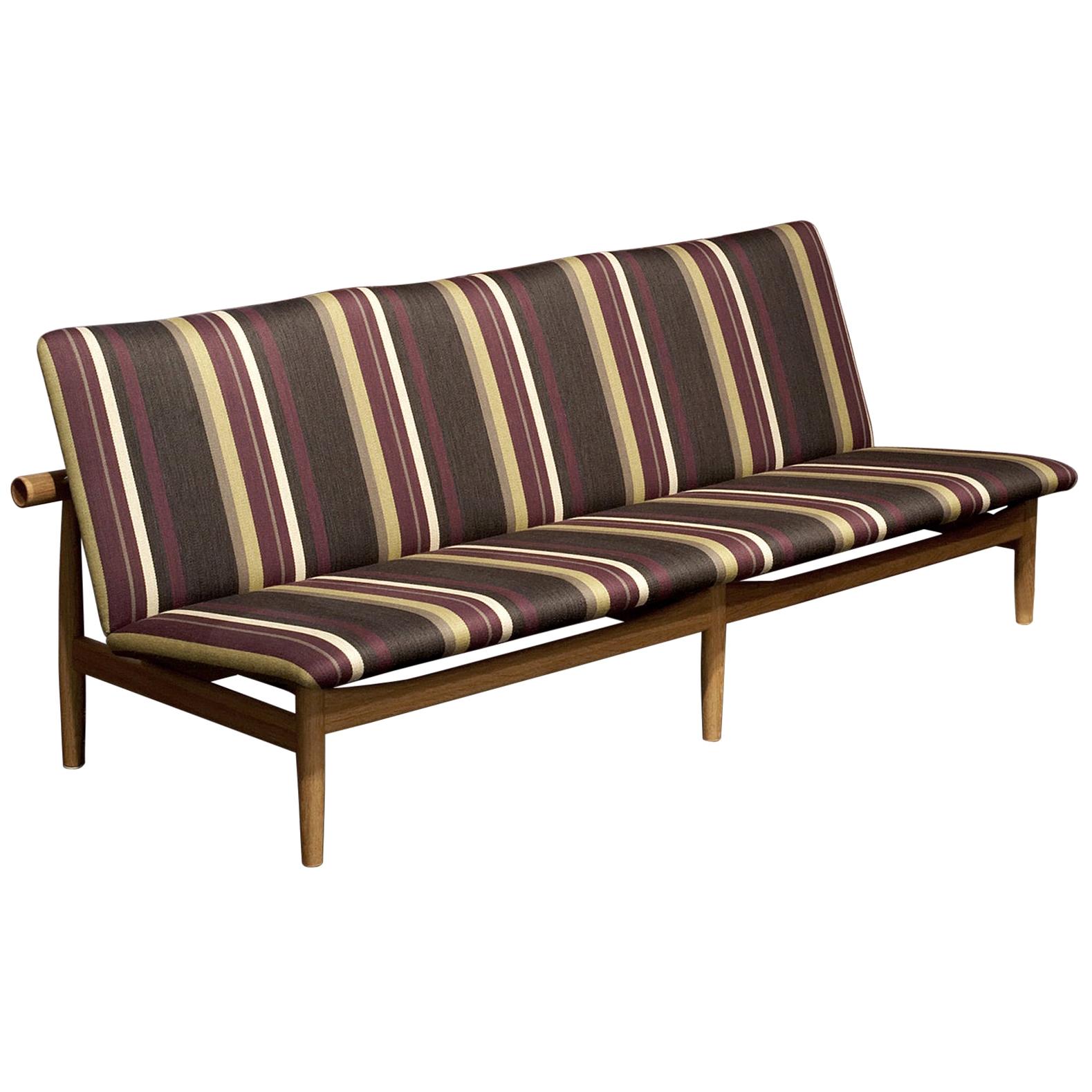 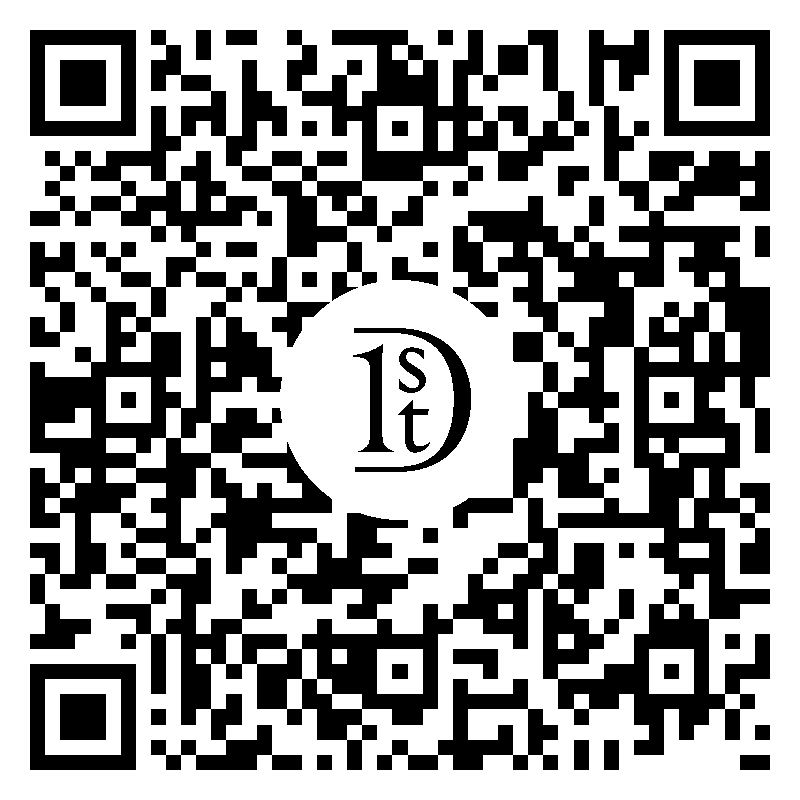 Three-seaters sofa designed by Finn Juhl in 1957, relaunched in 2007. Manufactured by House of Finn Juhl in Denmark. Finn Juhl’s partnership with the furniture manufacturer France & Son gave birth to a series of furniture well-suited for Industrial Production, while staying true to the ideals of simple designs that reigned in the 1950s. The most famous example of this cooperation is probably the Japan Series from 1957, which consists of an armchair, a footstool, a two-seater sofa and a three-seater sofa. The sublime simplicity of this series is a far cry from his earlier furniture designs and is inspired by traditional Japanese building techniques. The solid horizontal backrest, resting on the slightly tapered legs, is a reference to a Japanese temple door. The backrest ends in a circular recess, adding an optically refined impression with great effect. That was very typical of Finn Juhl, who famously said that deviation is in the detail. Even with this simple construction, Finn Juhl is true to his IDEA of emphasizing the difference between the carried and the carrying elements by separating the backrest from the bearing frame with brackets in brass. Dimensions: W 180 cm D 70 cm H 78 cm Seat height 35 cm Important information regarding images of products: Please note that some of the images show other colors and variations of the model, these images are only to present interior design proposals. The item that is selling is on the first image. Important information regarding color(s) of products: Actual colors may vary. This is due to the fact that every computer monitor, laptop, tablet and phone screen has a different capability to display colors and that everyone sees these colors differently. We try to edit our photos to show all of our products as life-like as possible, but please understand the actual color may vary slightly from your monitor About the designer: Finn Juhl was born on January 30, 1912 in Copenhagen. He wished to study art history, however, his father would not allow it. Instead, Finn Juhl began studying architecture at the Royal Academy of Arts in Copenhagen. Here, he studied under some of the most influential functionalists of his time. Among these was the great architect Vilhelm Lauritzen who hired Finn Juhl at his own studio in 1934 before Finn Juhl had even graduated. Eventually, the work took up all of his time and Finn Juhl never finished his studies. Later in life he always described himself as a self-taught furniture designer. One of the international highlights of Finn Juhl’s career was designing the complete interior of the Trusteeship Council Chamber at the UN headquarters in New York between 1951 and 1952. His sculptural furniture is widely appreciated all-over the world. Today, Finn Juhl is still considered the father of Danish Modern, the design movement from Denmark, that arose during the 1950s in the United States. At the time of his death in 1989, Finn Juhl had become an award-winning and highly respected international furniture artist. Finn Juhl was greatly inspired by both modernism in art and functionalism in architecture. His genius was cross-pollinating these two fields, thus creating a completely new artistic idiom. Like sculptures, Finn Juhl’s designs are created to stand freely in a room. At the same time, they are developed with a playful insight into the practical function of every detail. About the manufacturer: In 2001 House of Finn Juhl trusted with the exclusive rights to manufacture and relaunch Finn Juhl’s sculptural and iconic furniture by Finn Juhl’s widow Hanne Wilhelm Hansen. Today the unique Finn Juhl collection consists of more than 40 Classic masterpieces, all of which they manufacture with the utmost respect for the original heritage and strict demands for quality. 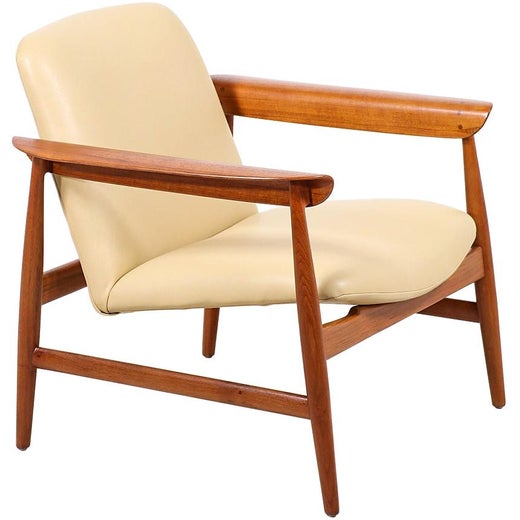 As a young man, Juhl hoped to become an art historian, but his father steered him into a more practical course of study in architecture. He began designing furniture in the late 1930s, a discipline in which, despite his education, Juhl was self-taught, and quite proud of the fact. His earliest works, designed in the late 1930s, are perhaps his most idiosyncratic. The influence of contemporary art is clear in Juhl's 1939 Pelican chair: an almost Surrealist take on the classic wing chair. Critics reviled the piece, however; one said it looked like a "tired walrus." Juhl had tempered his creativity by 1945, when the Danish furniture-making firm Niels Vodder began to issue his designs. Yet his now-classic NV 45 armchair still demonstrates panache, with a seat that floats above the chair’s teak frame.

Juhl first exhibited his work in the United States in 1950, championed by Edgar Kaufmann Jr., an influential design critic and scion of America’s most prominent family of modern architecture and design patrons. (Kaufmann’s father commissioned Frank Lloyd Wright’s design of the house “Fallingwater.”) Juhl quickly won a following for such signature designs as the supremely comfortable Chieftan lounge chair, the biomorphic Baker sofa, and the Judas table, a piece ornamented with stylish inlaid silver plaquettes.

As you will see from the offerings on 1stDibs, Finn Juhl’s furniture — as well as his lighting, ceramics, tableware and accessories — has an air of relaxed sophistication and elegance that is unique in the realm of mid-20th-century design.

About the Seller
4.9
Located in Barcelona, Spain
Platinum Seller
These expertly vetted sellers are 1stDibs' most experienced sellers and are rated highest by our customers.
Established in 2015
1stDibs seller since 2015
1,082 sales on 1stDibs
Typical response time: 2 hours
More From This Seller

$23,635
Modern and Comfortable Colored Sofa, Japanese Inspiration
Located in Paris, FR
This sofa's memory inspires us in its simplicity, referring us to a refined sense of elegance and contemporaneity. Sofa an iconic design and match in perfection with modern interiors...
Category

$4,250
Pair of Finn Juhl Lounge or Armchairs for France & Son in Greige Fabric
By Finn Juhl
Located in New York, NY
A pair of midcentury lounge or armchairs by Finn Juhl for France & Son, featuring tight backs and seats supported by a wood frame with flat armrests, the manufacturer's label on the ...
Category