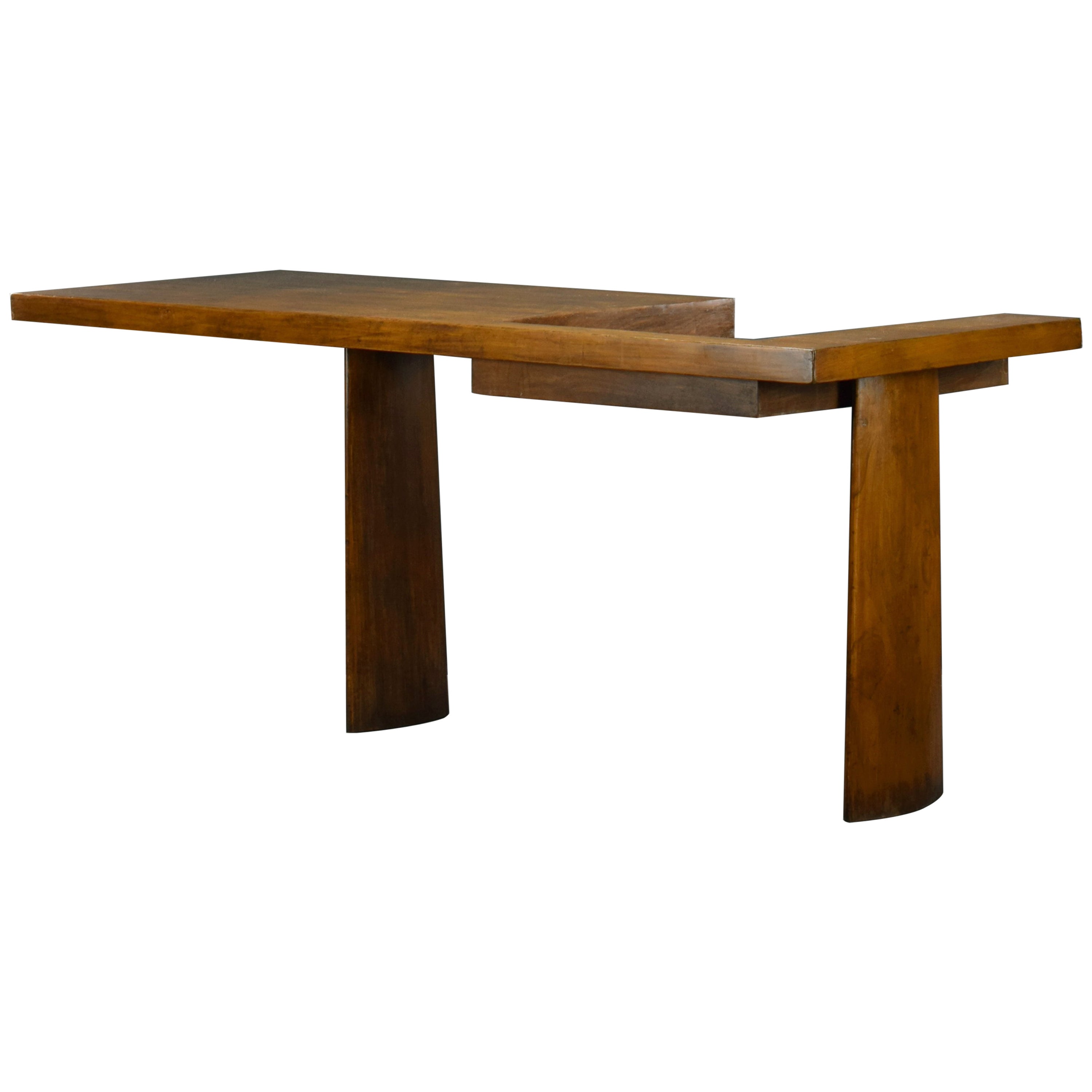 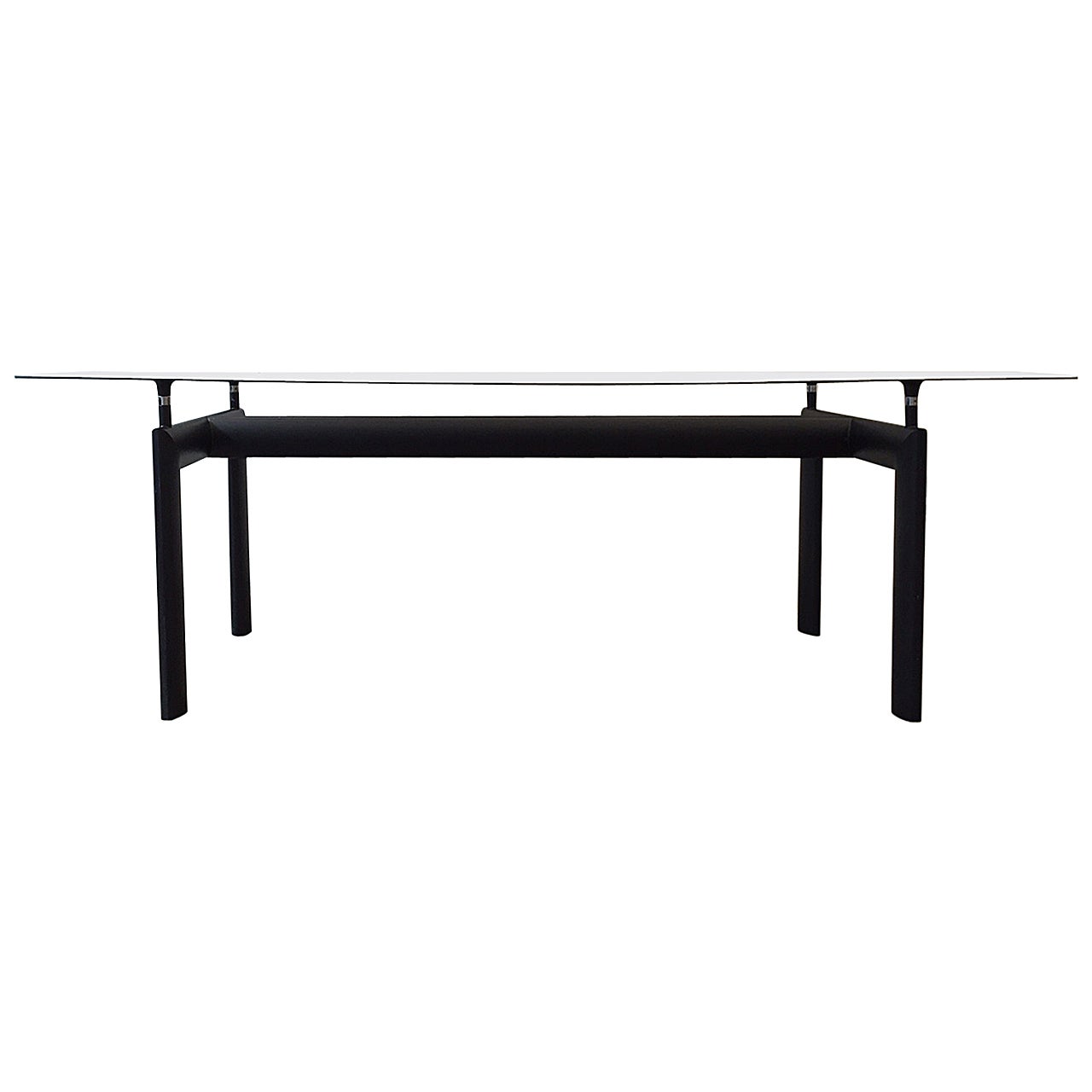 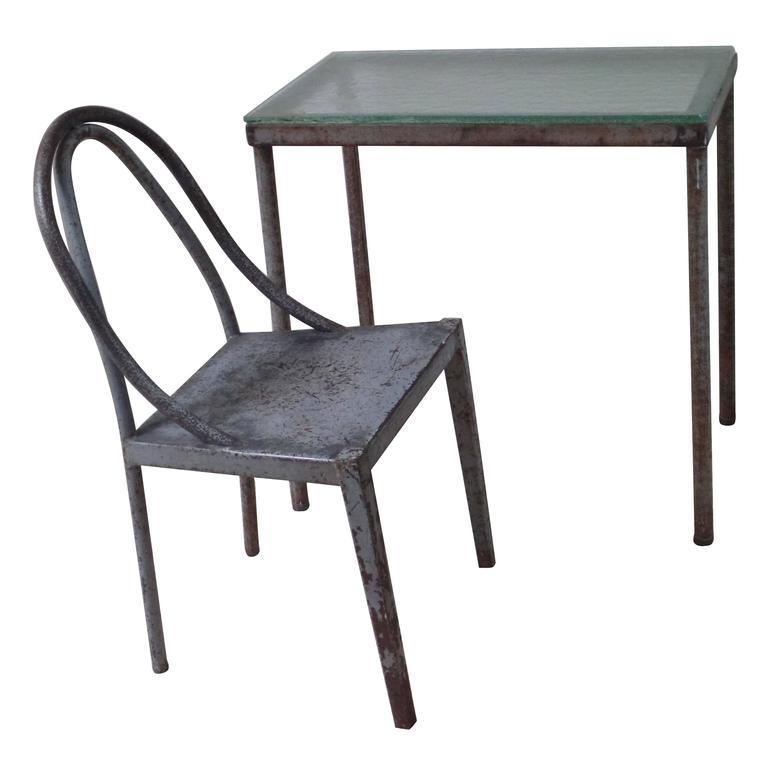 LC6 Table by Le Corbusier, Jeanneret and Perriand for Cassina 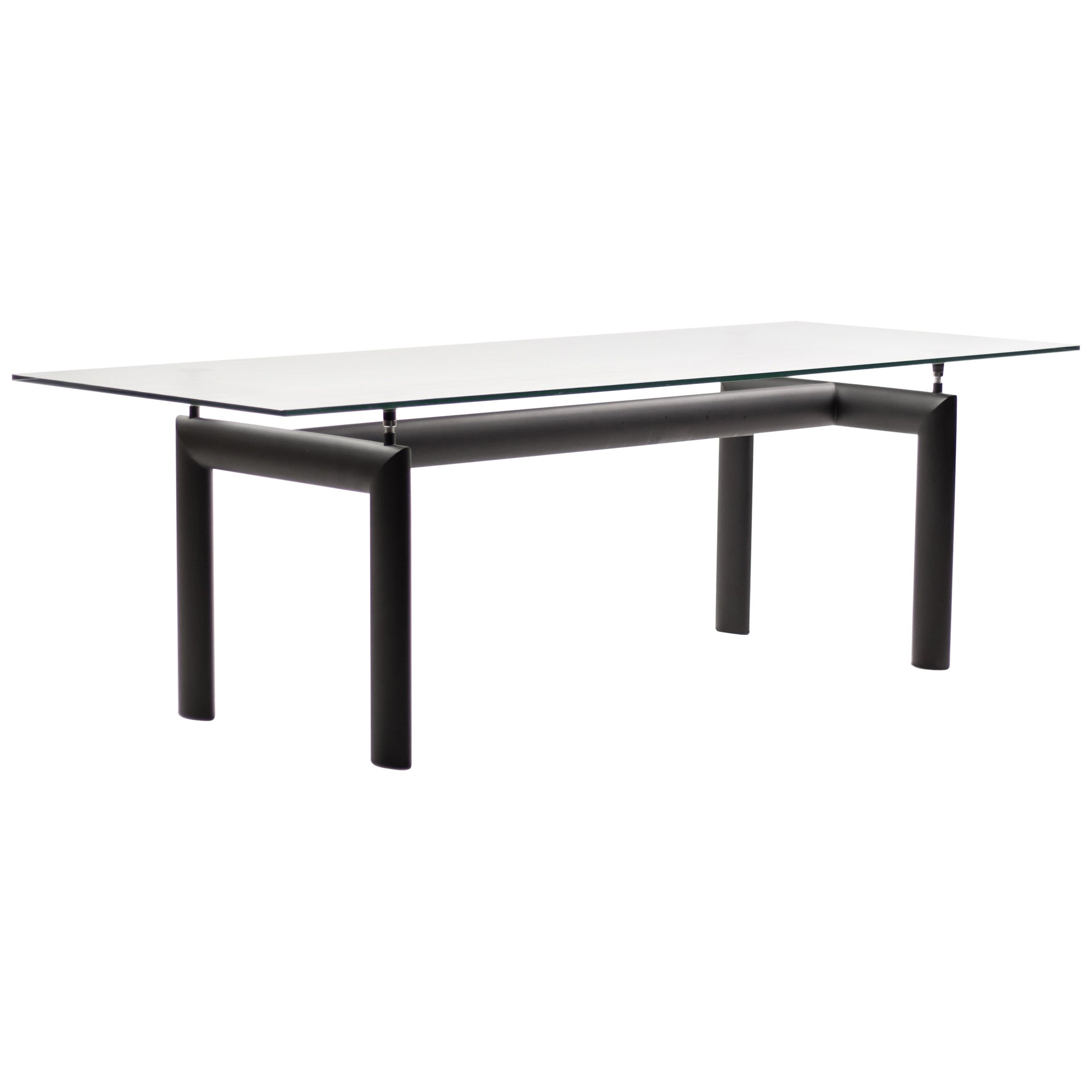 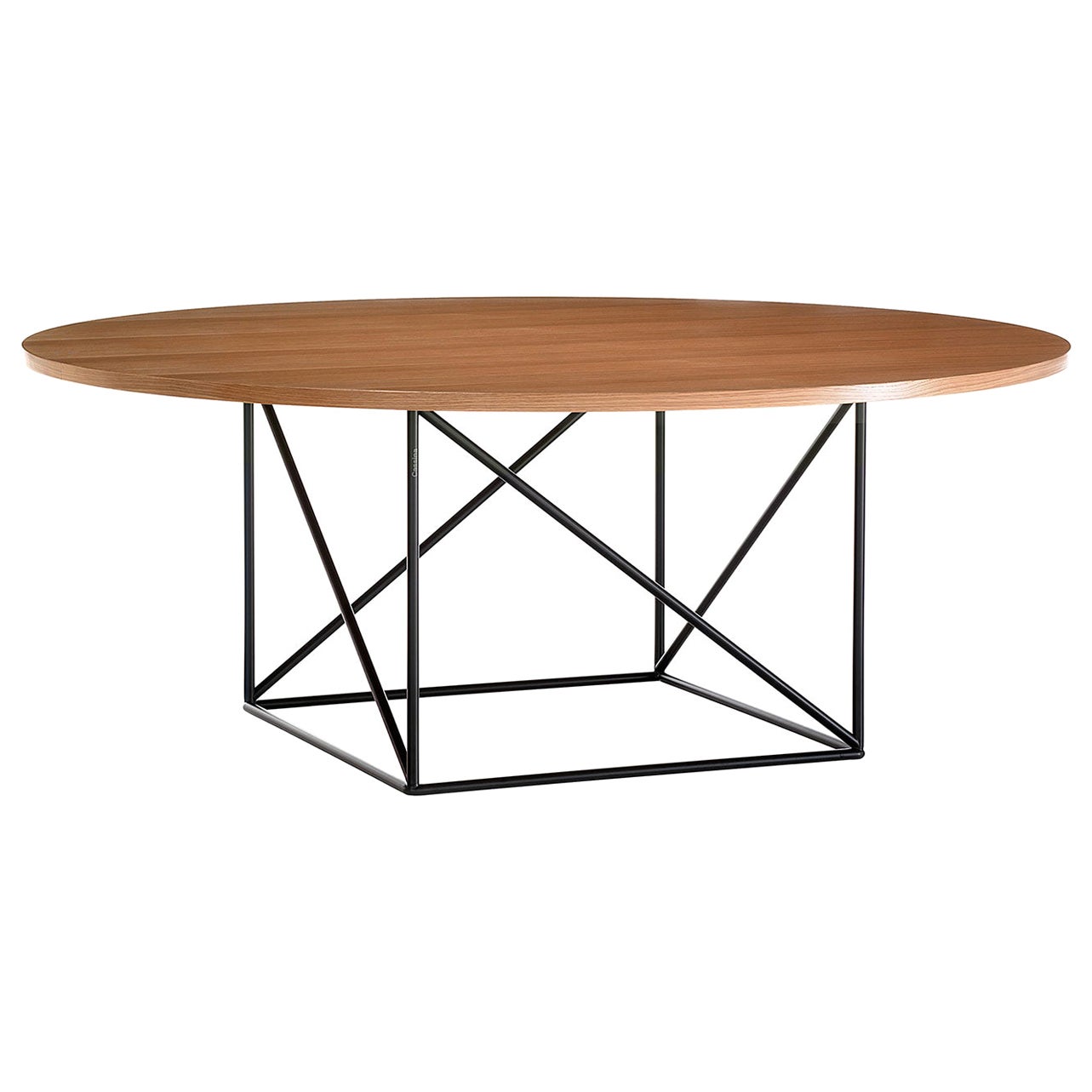 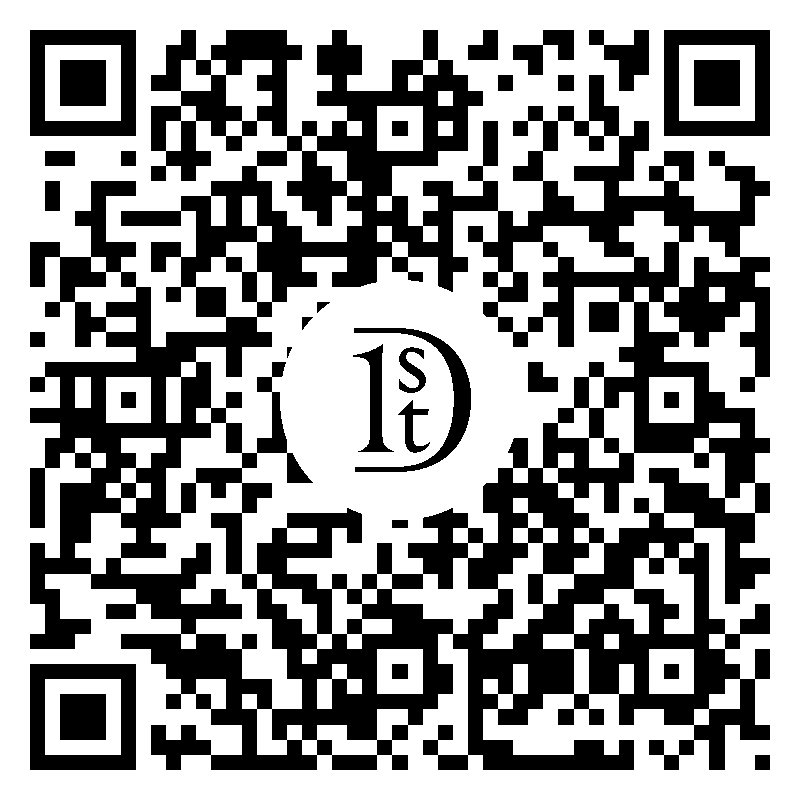 Swiss-born Charles-Édouard Jeanneret, best known by his adopted name Le Corbusier, was a highly influential architect, designer, painter, urban planner and writer whose career spanned almost five decades. A pioneer of progress-minded modern architecture, Le Corbusier sought to impose a rational order on the chaos of the world through design. He rejected the excessive architectural ornament and developed a style that became known as Brutalism, creating buildings with elemental geometric forms that were made of industrial materials such as steel and reinforced concrete. Le Corbusier believed that pure, well-designed spaces could offer a lesson in how little is needed to achieve happiness. To convey this notion, the architect prioritized modern, open interiors and emphasized light, rational designs. His architecture and interiors share a clear sense of space and structural order, underlining the beauty in harmony, proportion and simplicity.

Le Corbusier’s furniture espouses these same ideals. His designs are spare, minimal and efficient but at the same time offer supreme comfort. Collaborating with his cousin, Pierre Jeanneret, and designer Charlotte Perriand, he devised such iconic pieces as the LC2 Le Grand Confort armchair and the LC4 chaise longue. Each couples a tubular chrome frame with soft, supple leather upholstery, lending an organic warmth to an industrially made design. In his furniture, Le Corbusier broke new ground in ergonomics. The shape of the LC4 chaise is taken directly from the human form; the classic cowhide upholstery makes the sitter feel weightless; and the piece features an adjustable positioning mechanism to promote total relaxation.

Such planning and intelligence were the hallmarks of Le Corbusier’s career. Whether in his designs for private residences such as the Villa Savoye near Paris, apartment towers like the Unité D'habitation in Marseilles, or in his furniture, he worked toward a style of living that was expansive and flexible. The strength and simplicity of line of Le Corbusier’s seating pieces give them a sculptural presence in any décor, yet they are sublimely restful. And as you will see from the offerings on these pages, Le Corbusier’s furniture reflects a worldly taste: it is at once refined, cosmopolitan and chic. 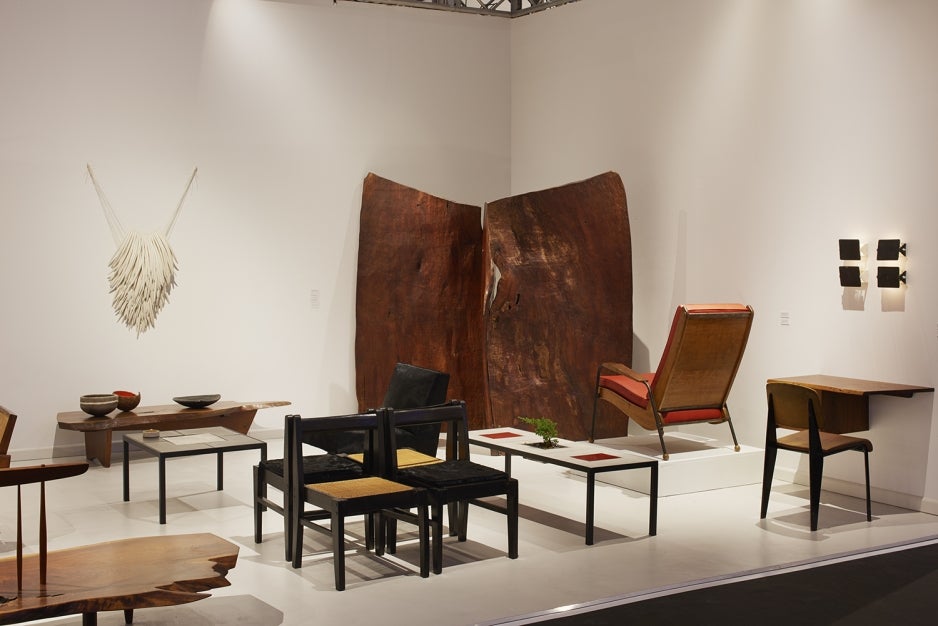 About the Seller
No Reviews Yet
Located in New York, NY
Recognized Seller
These prestigious sellers are industry leaders and represent the highest echelon for item quality and design.
Established in 1985
1stDibs seller since 2013
15 sales on 1stDibs
Typical response time: 3 hours
More From This Seller
View All From Seller

Le Corbusier Ahmedabad Console Desk LC-AH-16-A
By Le Corbusier
Located in Dietikon, CH
This beautiful console desk was created by B. Doshi and Le Corbusier. It is not only a very rare piece but also an item of museum quality. It is raw in its simplicity and splendid wi...
Category

$3,500
Le Corbusier LC16 Writing Desk and Shelve by Cassina
By Le Corbusier, Cassina
Located in Barcelona, Barcelona
Writing desk designed by Le Corbusier in 1957. Relaunched in 2010. Manufactured by Cassina in Italy. Defying the laws of physics, going beyond what we normally understand by the ...
Category

LC6 Table by Le Corbusier, Jeanneret and Perriand for Cassina

$17,215
Le Bureau de Paolo Wooden Desk
By Sam Baron
Located in Roma, IT
Le bureau de Paolo is a desk constituted of wide variety of boxes and drawers. These boxeshave a structural function: They compose the feet of the desk to which is added a functiona...
Category