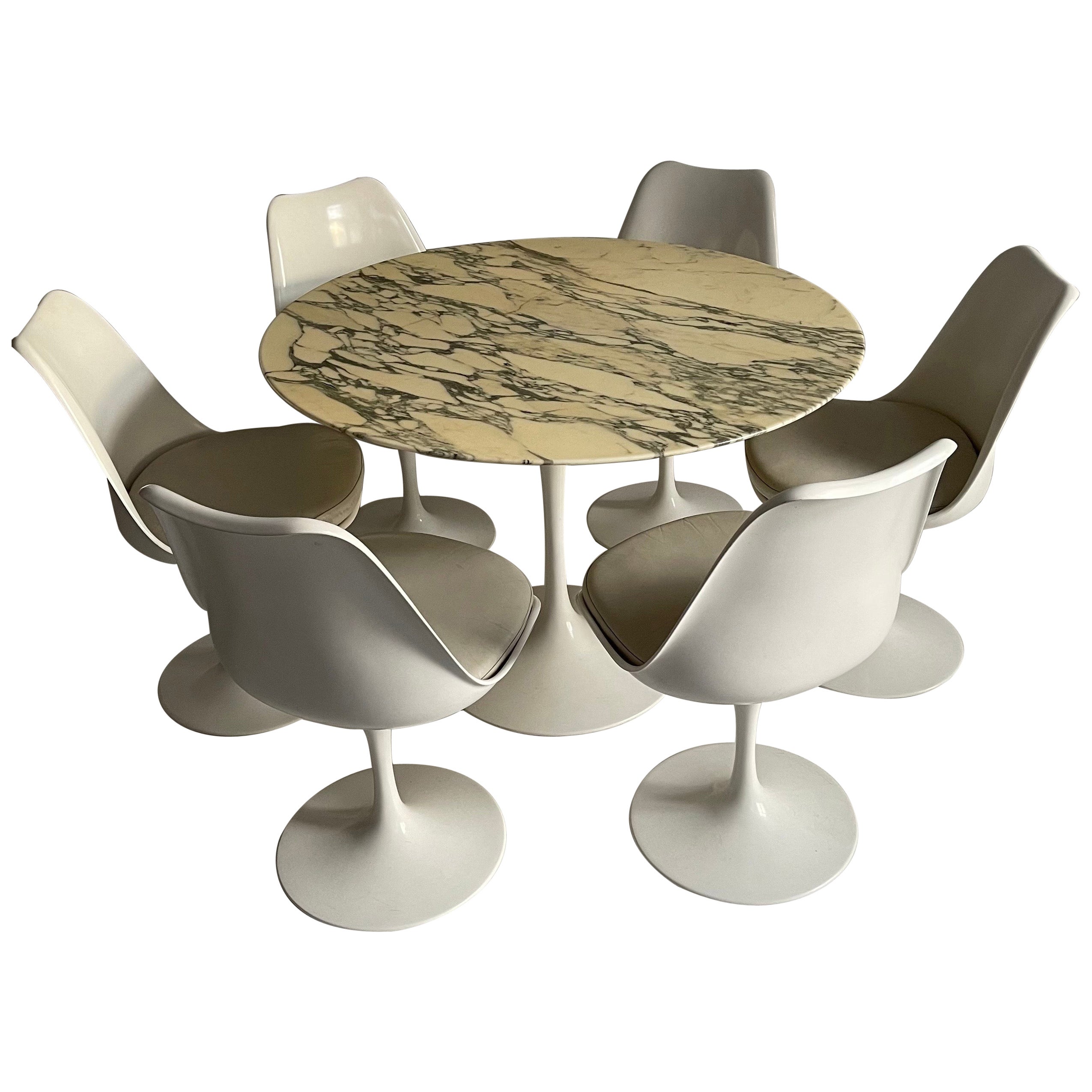 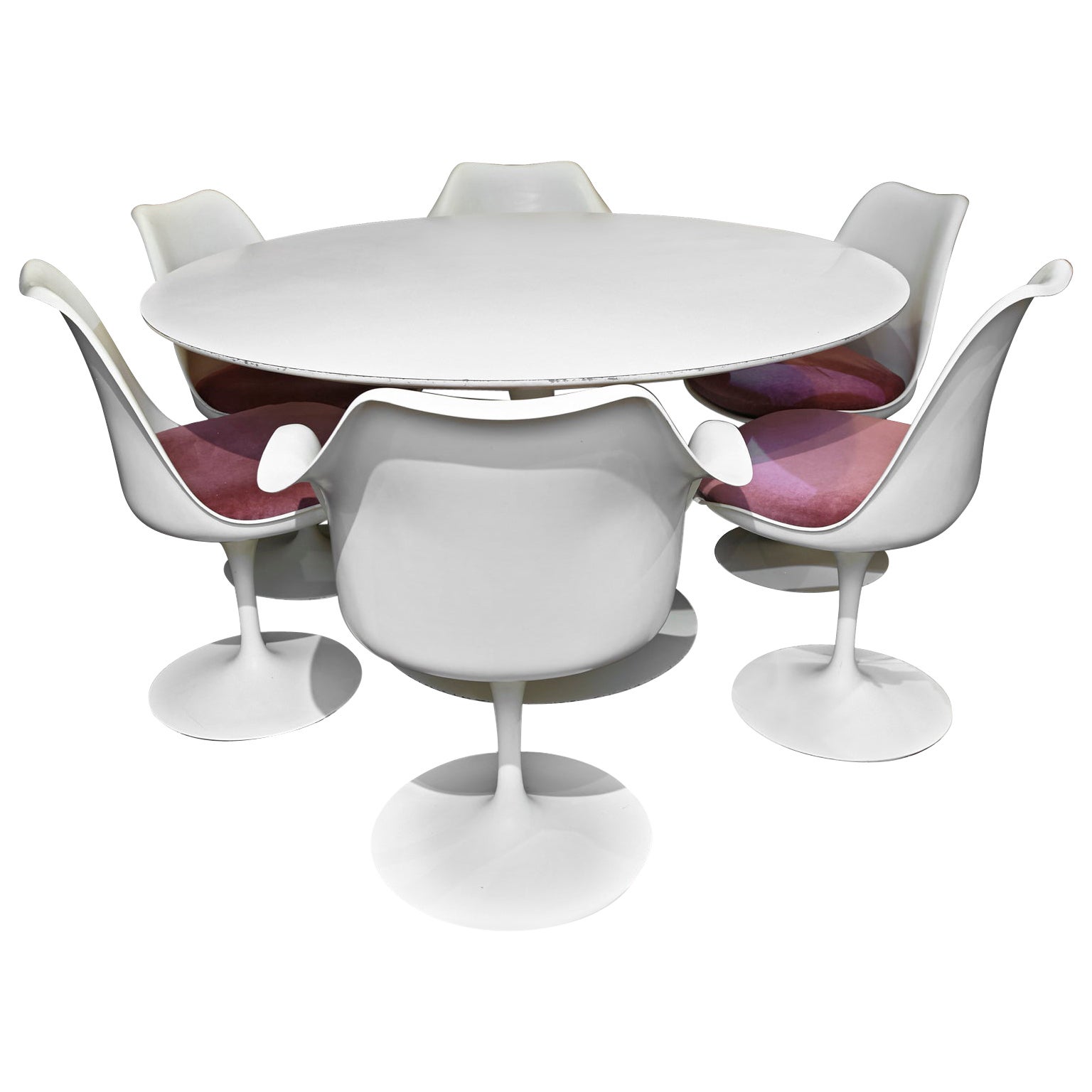 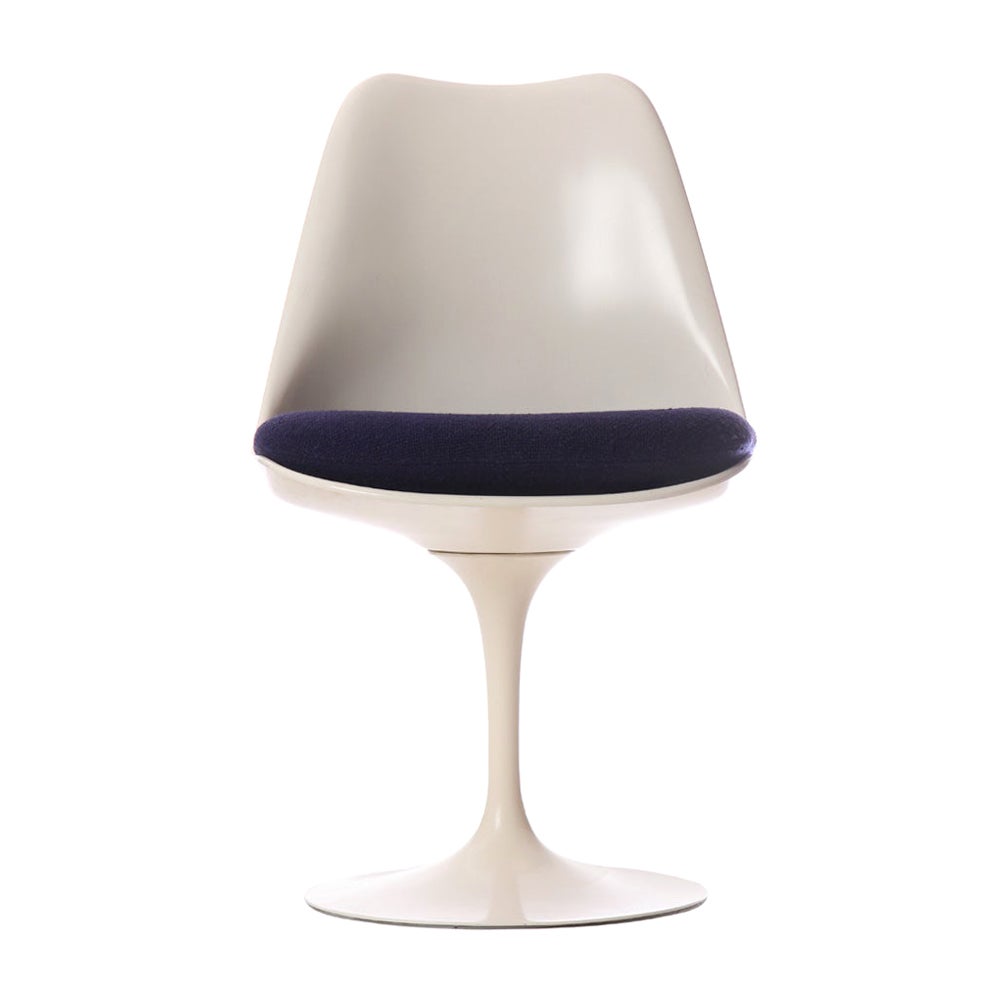 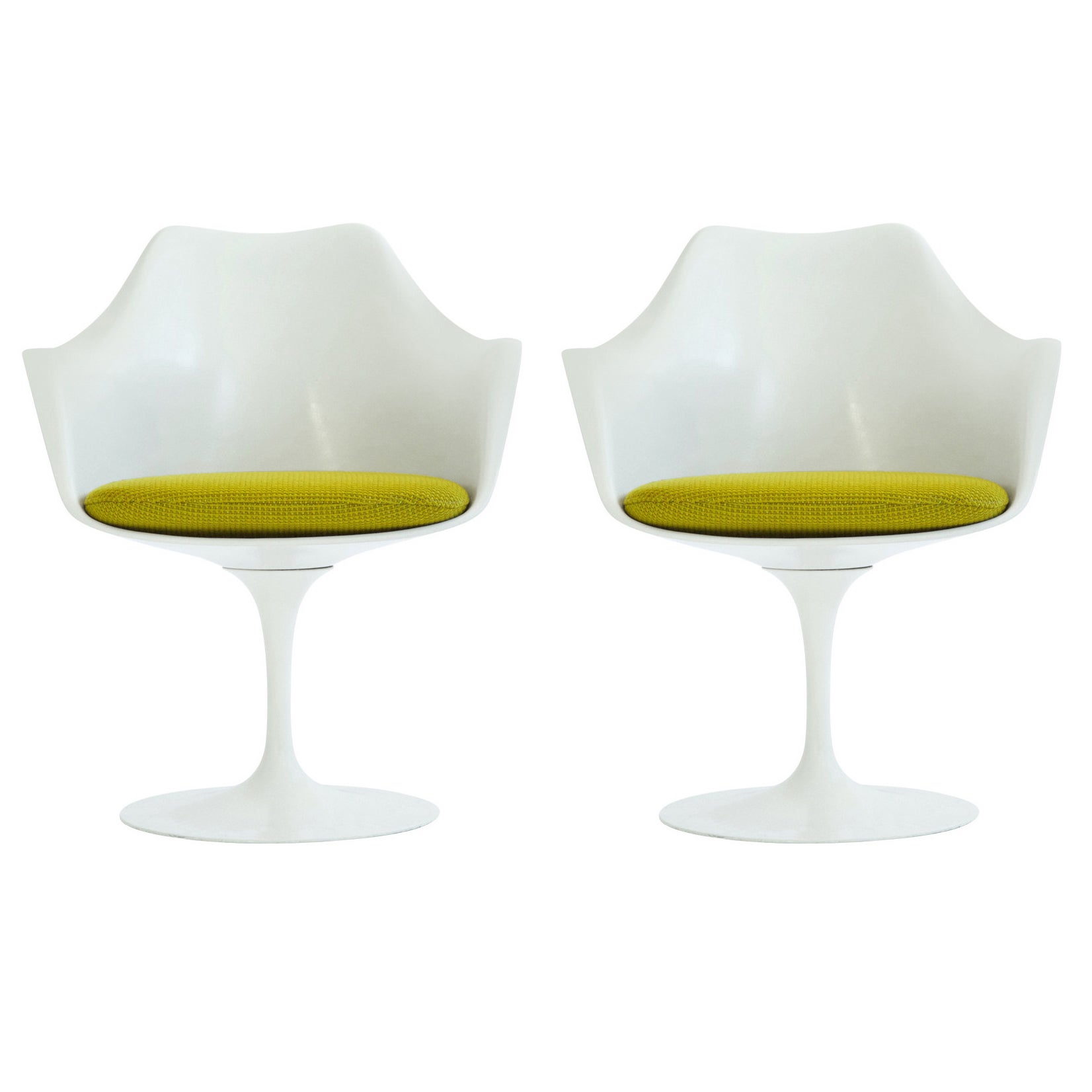 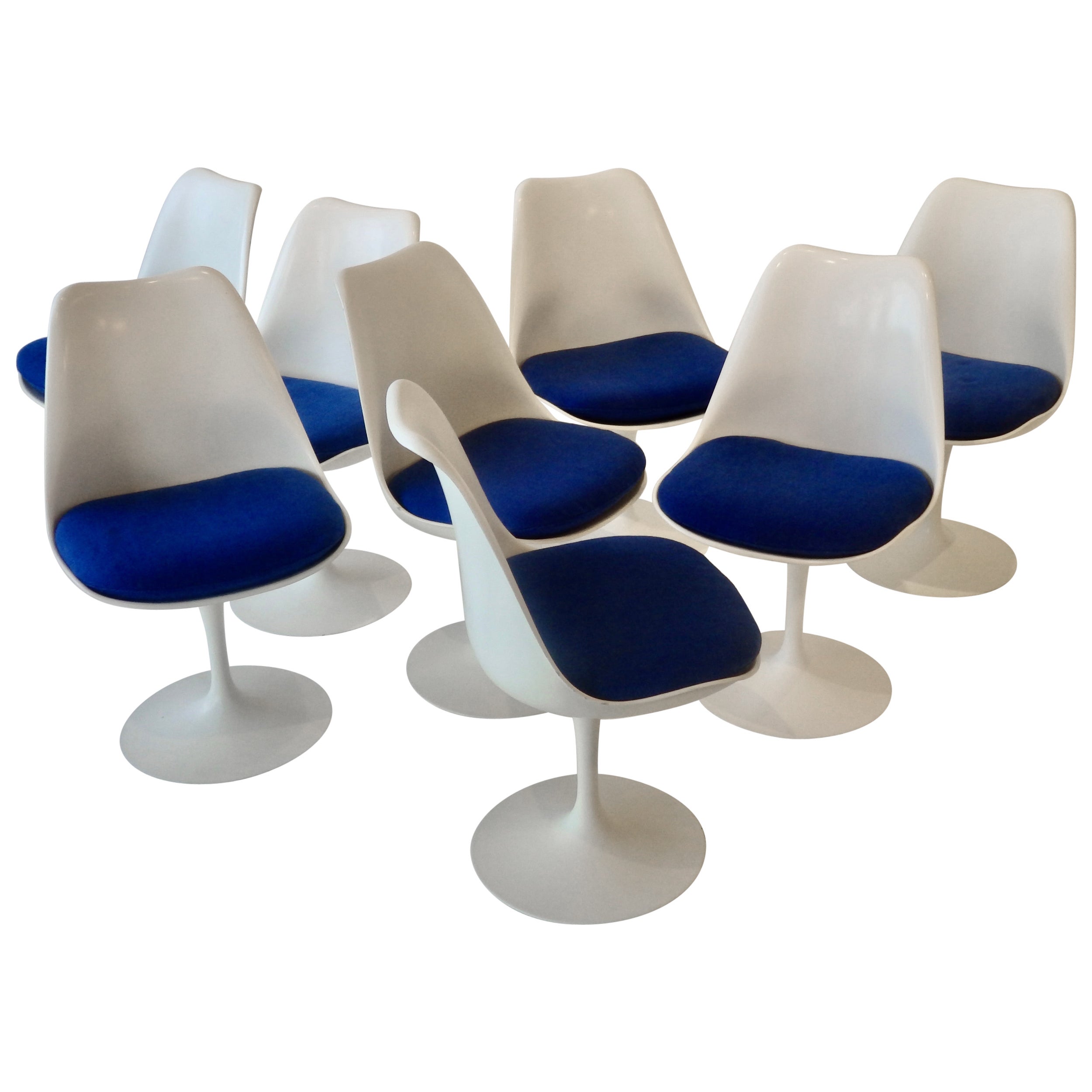 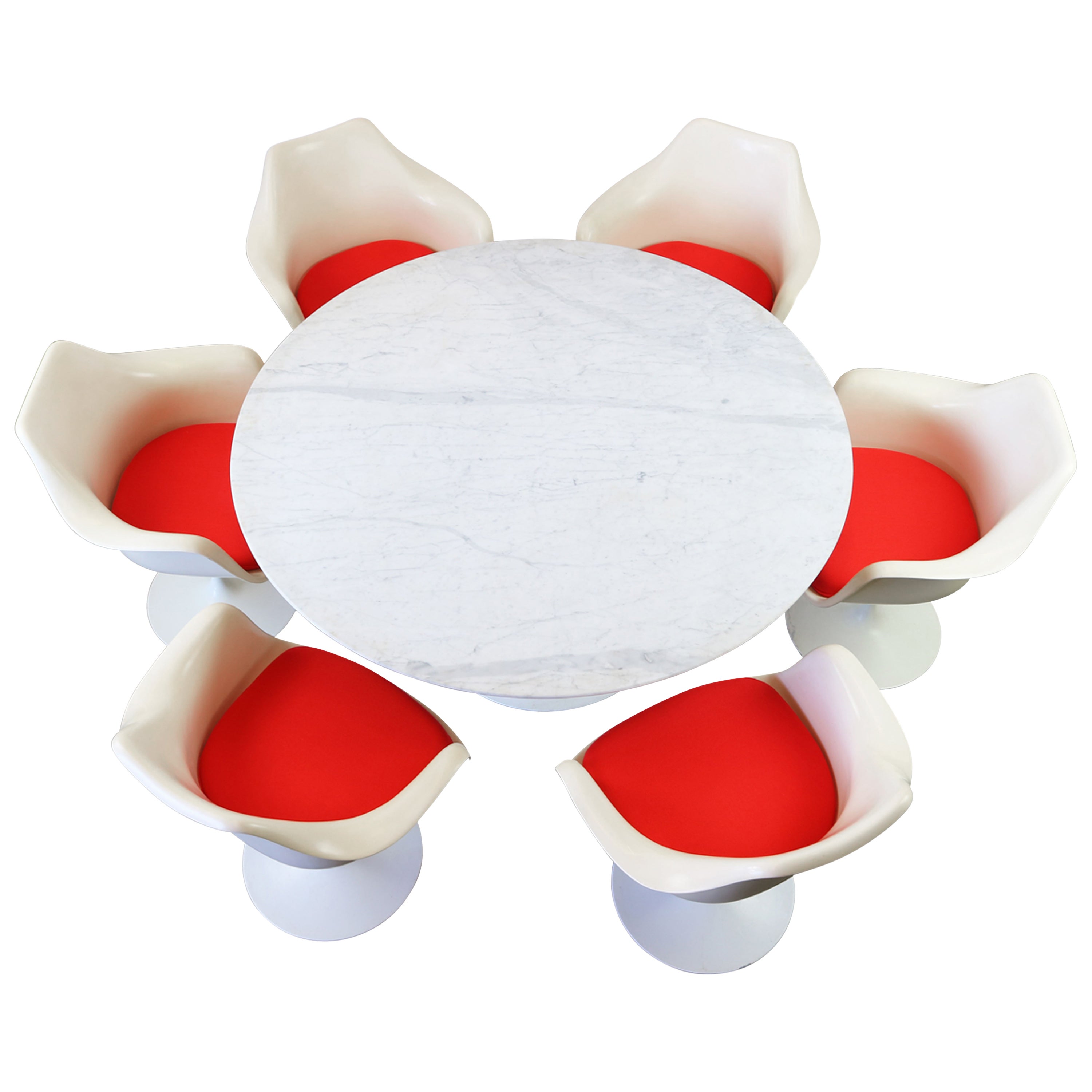 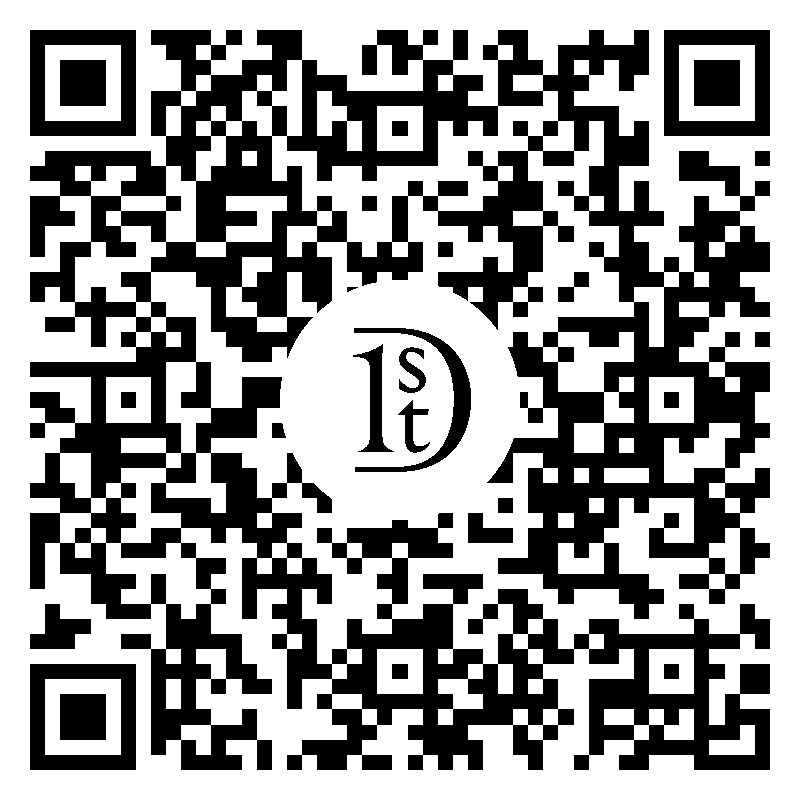 A Classic midcentury dining set comprising an original black Nero Marquina marble Eero Saarinen round tulip dining table matched to 6 original black Harry Bertoia wire chairs with original seat pads, both produced by Knoll. This is a Classic combination of complimentary designs that both have their root in designs pioneered by Knoll since the 1950s and were so popular they are still produced today. The great beauty in both Sarrinen’s and Bertoia’s designs were that they used clean, simple lines that were ground breaking and innovative but have stood the test of time. You are therefore as likely to see this table and chairs in a midcentury inspired home just as you would a modern dining room. The table dates from 2008 and was part of the platinum collection designed to mark the 50th Anniversary of Saarinen’s design and is labelled, as shown, accordingly. At 152cm it’s the largest round marble table Knoll offer in this design. It’s been well cared for and cherished so is in very good used condition with no major marks or scratches and no chips to the edge as is often found with these tables. It does however, have two very small chips to the surface that look like they have been filled with a black epoxy. They are shown in the photos next to a £1 coin for scale, the first measures 10mm round and the second 7mm. In reality they are not at all noticeable outside of me providing close ups as Nero Marquina is characterized by not only the black color with white veining but also by the fact you can often find little fossils in the surface. As such the very smalled filled chips blend away within the overall look of the top. The black base does have some marks just as you would expect as diners often scuff the base with their feet. But there is no rust and no areas where the black finish has been removed. In any event the base sits in the shadow of the top, so again any marks are barely visible. The chairs, on the other hand, may well have had a more colorful past life and were obviously well used in their time. It’s clear that the chairs have been re-powder coated in black at some point in their life (which remains in very good condition). You can see from the label shown that the chairs date from 1971 and all have the original leather seat pads (which are in very good used, vintage condition) although only one retains the original label that often gets detached over the years. Original chairs were produced in chrome and also a variety of coatings over the years. The coated chairs were designed to allow the flexibility to be used outside and as such many older chairs will show significant signs of wear; which is of course why previous owners often have them restored by re-powder coating them to their former glory. Overall the two designs create an eye-catching centerpiece with the black chairs complimenting the black base and the black, grey and whites tones of the marble top. The chairs are also much more comfortable to sit in with the seat pads and they make a surprising difference to the overall day to day usability of Bertoia’s design. Dimensions Table: Height 73cm x width/depth 152cm diameter Chairs: H 74 x W 54 x D 56cm Seat height: 45cm.

Sculptor, furniture and jewelry designer, graphic artist and metalsmith, Harry Bertoia was one of the great cross-disciplinarians of 20th-century art and design and a central figure in American modernism. Among furniture aficionados he is known for the wire-lattice Diamond chair (and its variants such as the tall-backed Bird chair) designed for Knoll Inc. and first released in 1952. As an artist, Bertoia is revered for a style that was his alone. Bertoia’s metal sculptures are by turns expressive and austere, powerful and subtle, intimate in scale and monumental. All embody a tension between the intricacy and precision of Bertoia’s forms and the raw strength of his materials: steel, brass, bronze and copper.


Fortune seemed to guide Bertoia’s artistic development. Born in northeastern Italy, Bertoia immigrated to the United States at age 15, joining an older brother in Detroit. He studied drawing and metalworking in the gifted student program at Cass Technical High School. Recognition led to awards that culminated, in 1937, in a teaching scholarship to attend the Cranbrook Academy of Art in suburban Bloomfield Hills, one of the great crucibles of modernism in America. There, Bertoia made friendships — with architect Eero Saarinen, designers Charles and Ray Eames and Florence Schust Knoll and others — that shaped the course of his life. He taught metalworking at Cranbrook, and when materials rationing during World War II limited the availability of metals, Bertoia focused on jewelry design. He also experimented with monotype printmaking, and 19 of his earliest efforts were bought by the Guggenheim Museum.


In 1943, he left Cranbrook to work in California with the Eameses, helping them develop their now-famed plywood furniture. (Bertoia received scant credit.) Late in that decade, Florence and Hans Knoll persuaded him to move east and join Knoll Inc. His chairs became, and remain, perennial bestsellers. Royalties allowed Bertoia to devote himself full-time to metal sculpture, a medium he began to explore in earnest in 1947.


By the early 1950s Bertoia was receiving commissions for large-scale works from architects — the first came via Saarinen — as he refined his aesthetic vocabulary into two distinct skeins. One comprises his “sounding sculptures” — gongs and “Sonambient” groupings of rods that strike together and chime when touched by hand or by the wind. The other genre encompasses Bertoia’s naturalistic works: abstract sculptures that suggest bushes, flower petals, leaves, dandelions or sprays of grass. As you will see on these pages, Harry Bertoia was truly unique; his art and designs manifest a wholly singular combination of delicacy and strength.

About the Seller
5 / 5
Located in Highclere, United Kingdom
Vetted Seller
These experienced sellers undergo a comprehensive evaluation by our team of in-house experts.
Established in 2009
1stDibs seller since 2018
8 sales on 1stDibs
Typical response time: 1 hour
More From This Seller
View All From Seller