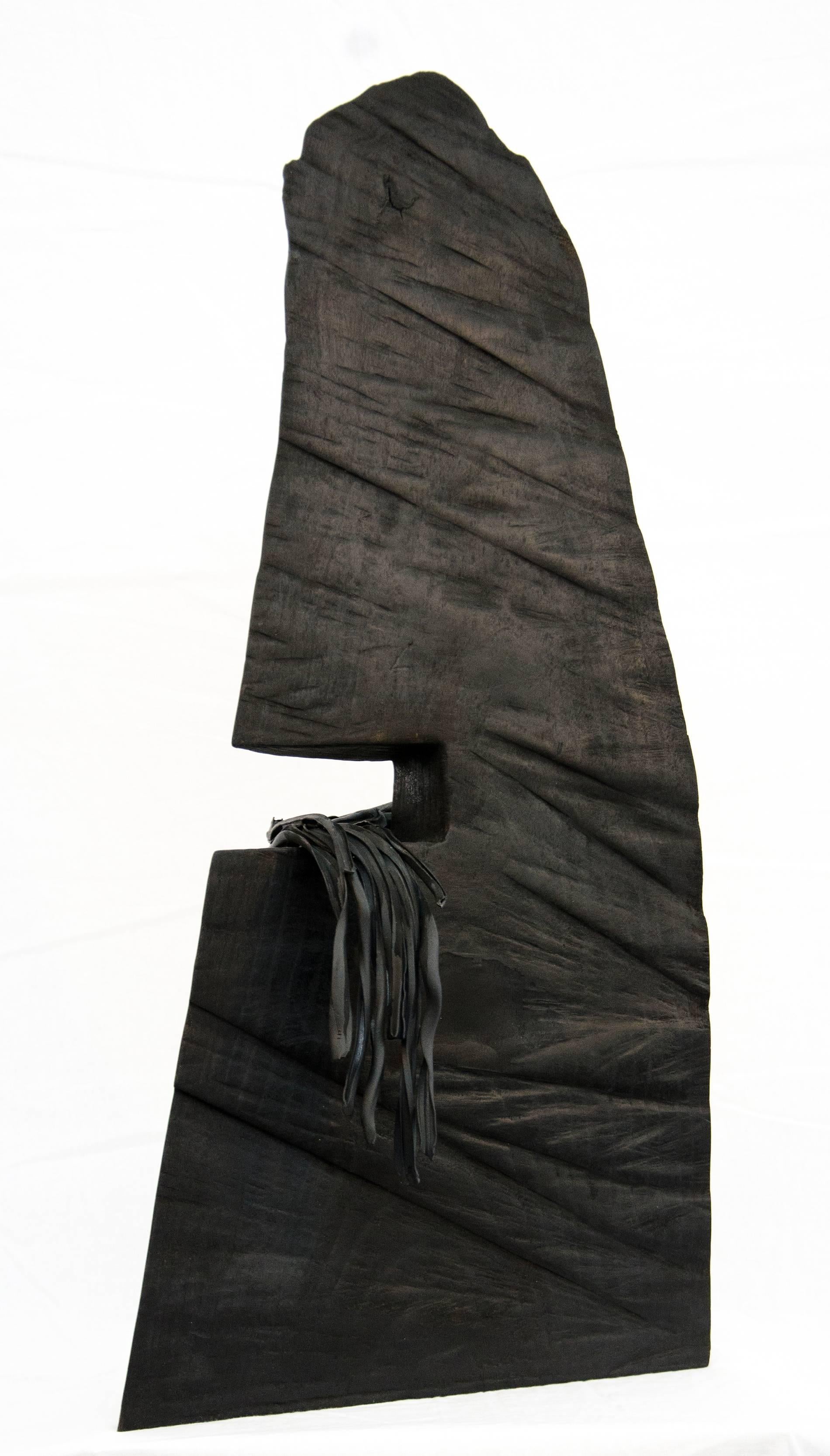 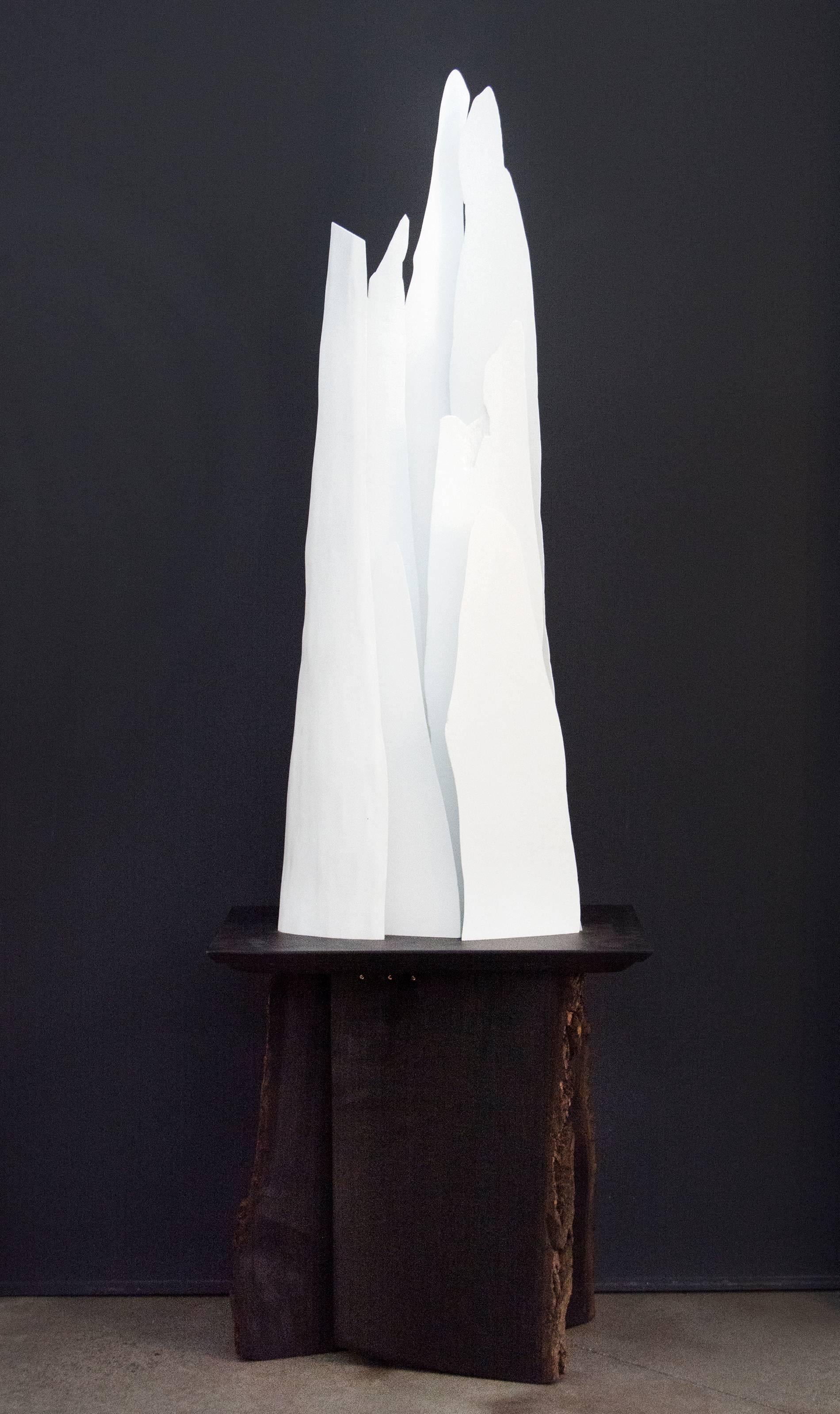 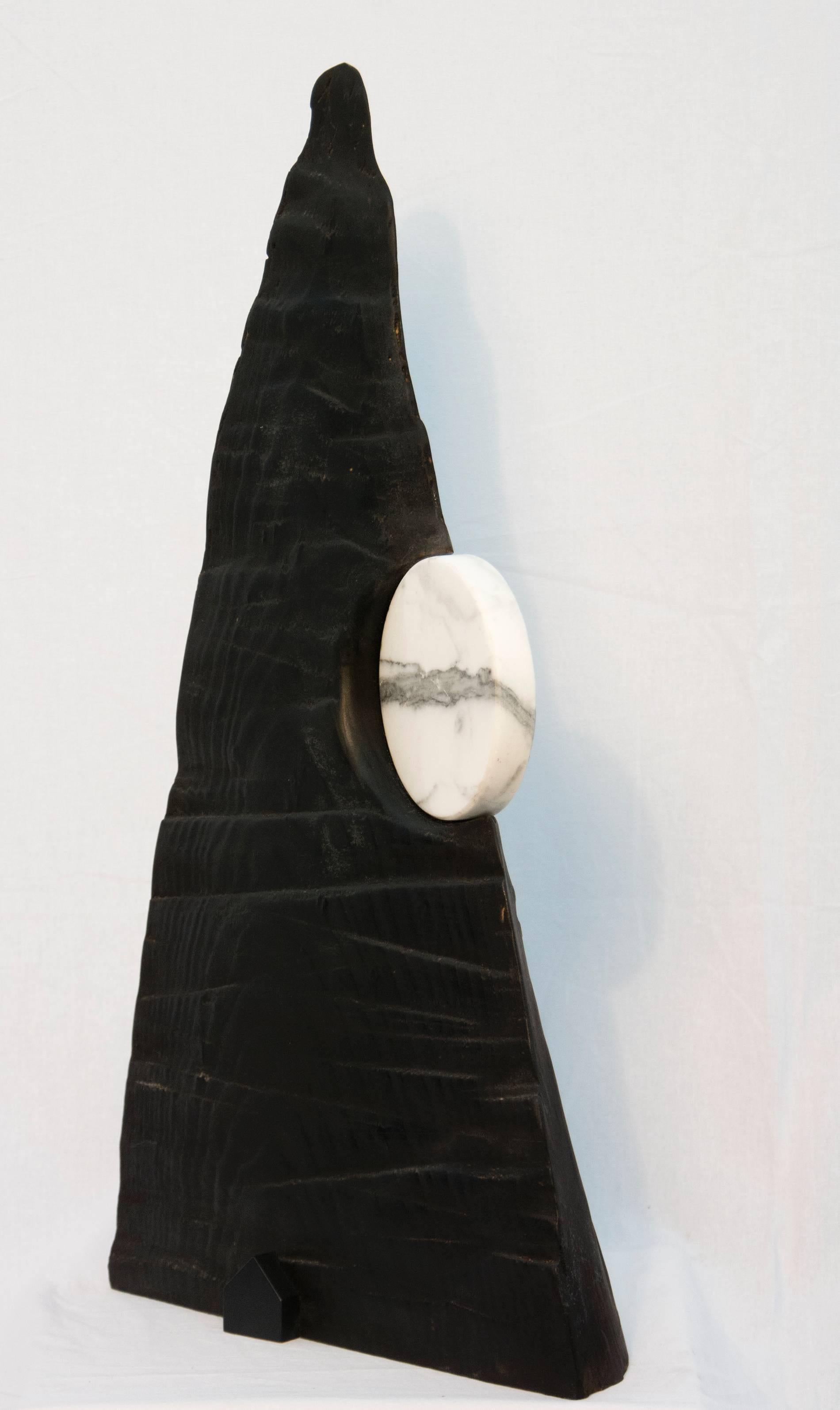 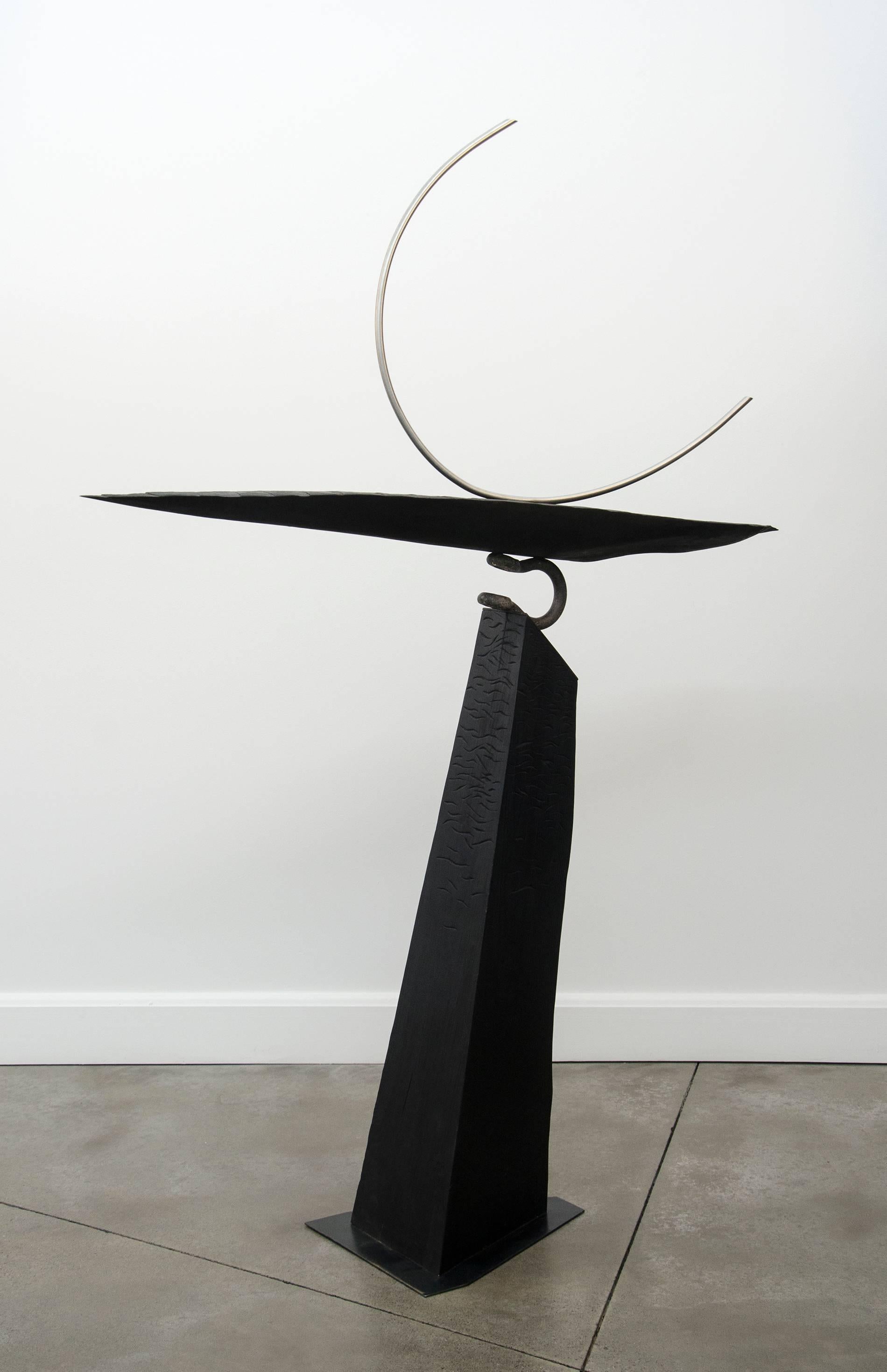 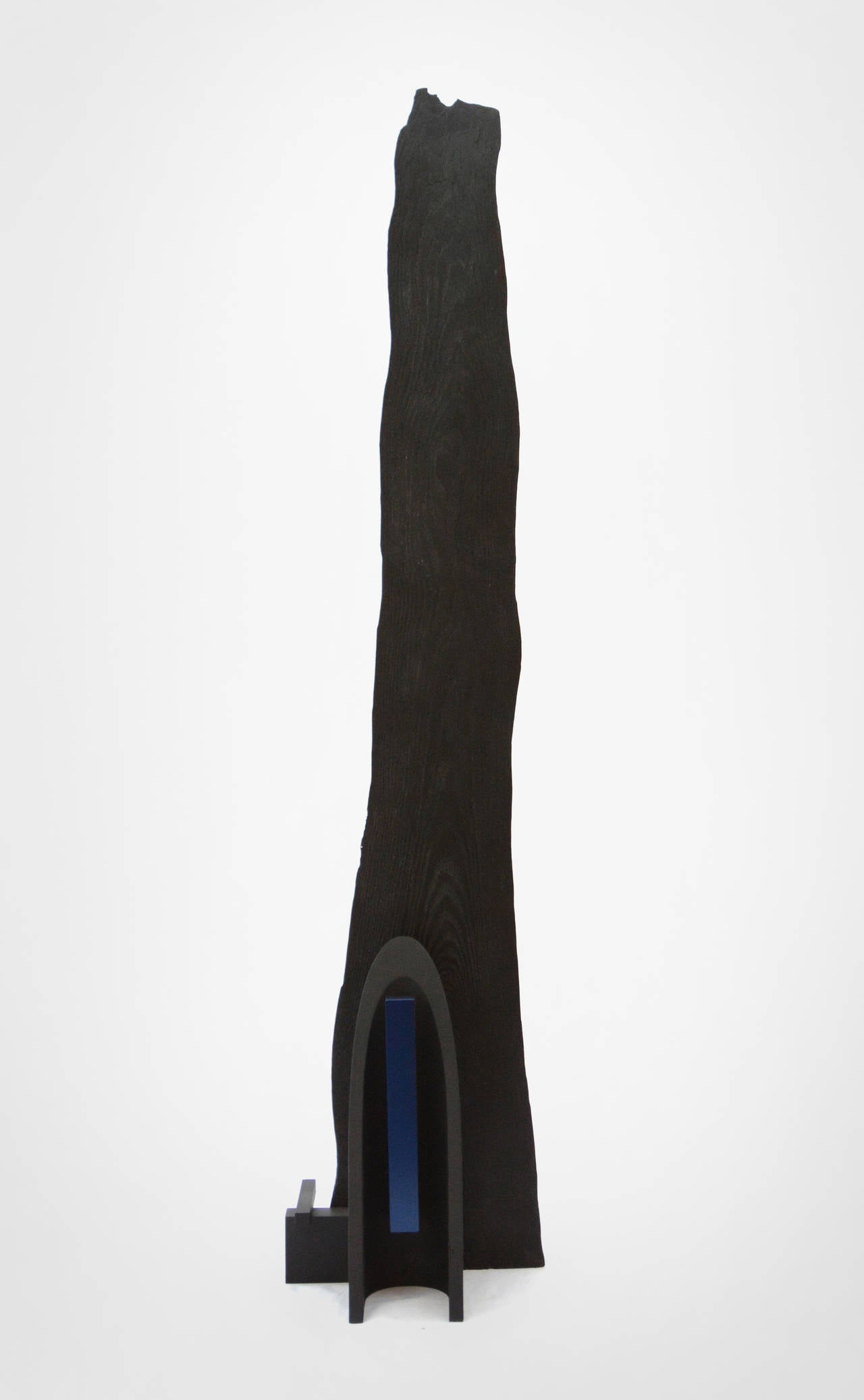 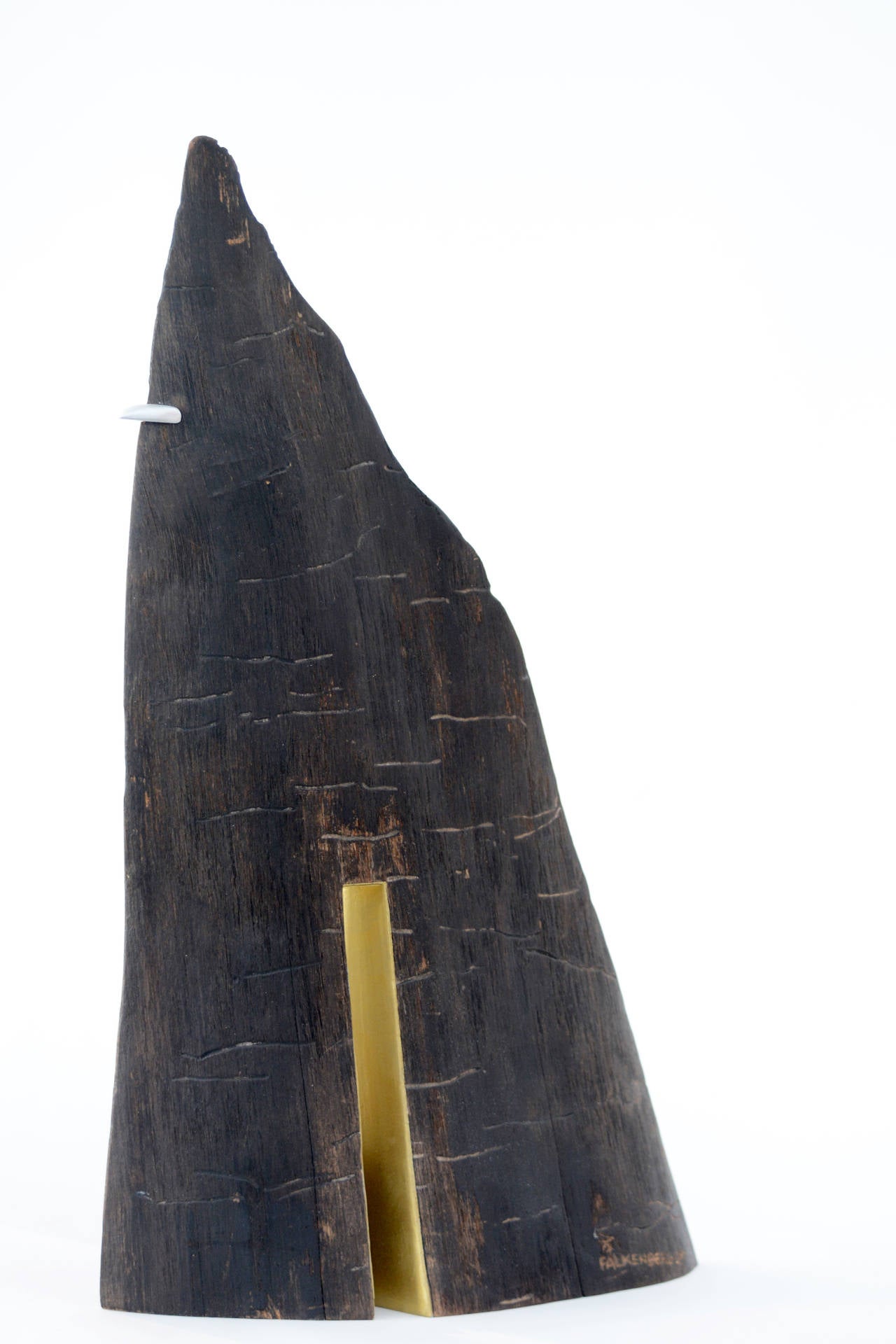 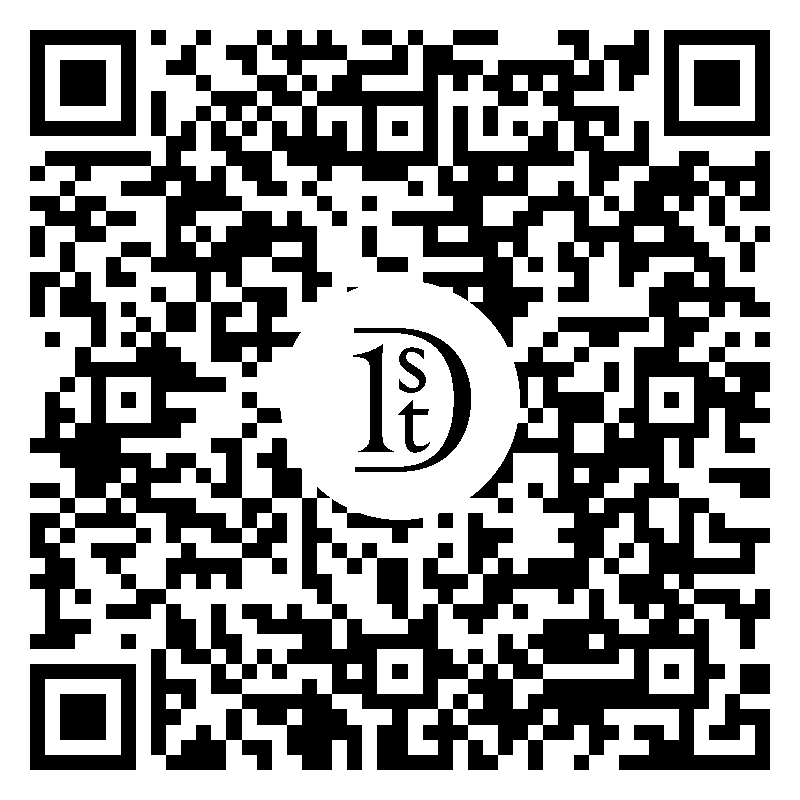 Tapered flat of charred cedar is oiled into a rich black patina and peppered with dots of silver metal that catch the light. Below this are grey wood strips set akimbo as they emerge from an S shaped support, charred and oiled in the same patina, evoking the gestures of the semaphore. Falkenberg is an established Canadian sculptor with roots in modern industrial constructivism that then evolved to include story. Here stars align in a sky above a man-made construction. Constructivism is an early 20th century movement that grew from the practice of Russian and eastern European sculptors were noted for their built, geometric work that broke from traditional carved sculpture to explore pure form, materials, positive and negative space. Falkenberg, introduced to these modern concepts and forms early in his career, evolved to merge the modern constructivist vision with narrative. In this piece, viewers are asked to impose additional narratives onto the scene in which stars were used historically in navigation. Falkenberg, RCA, attended the Ontario College of Art and graduated in Industrial Design in 1965. Numerous solo and group exhibitions of his sculptures have brought national acclaim. His work is part of corporate and public collections including Imperial Oil, Orfus Investments and the Robert McLaughlin Gallery. In 2004, Falkenberg co-founded the Durham West Arts Centre, a self-sustaining public art centre in West Durham, Ontario. Commissions include Canadian Embassy, Riyadh, Saudi Arabia, University of Ontario, Institute of Technology, Pickering Town Centre, Presidents Choice Office Tower, Government of Ontario, Dept. of Public Works, Bell Canada Data Centre and the Cadillac Development Corporation. 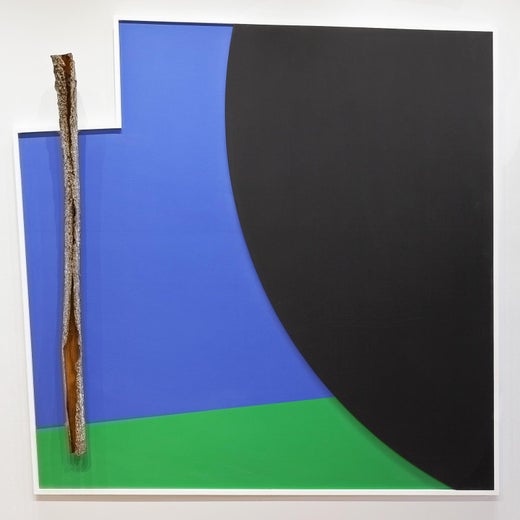 Edward Falkenberg, RCA, attended the Ontario College of Art and graduated in Industrial Design in 1965. Numerous solo and group exhibitions of his sculptures have brought national acclaim. His work is part of corporate collections, including Imperial Oil in Alberta and Orfus Investments in Ontario. In 2004, Falkenberg co-founded the Durham West Arts Centre, a self-sustaining public art centre in West Durham, Ontario.

"At the Ontario College of Art, I discovered artwork as espoused by the constructivists of the early 1900s," Falkenberg says. "I was quite captivated by the ideals of Walter Gropius, Antoine Pevesner, Wassily Kandinsky and Naum Gabo, the founders and teachers of the Bauhaus School of Design. I also discovered the works of Anthony Caro and David Smith. They moved away from the figure, used new materials, and relieved sculpture from the plinth. I found all this very exciting. In my early work I manipulated space by the use of flat planes. I drew inspiration from the inherent spirit of the natural landscape, architecture and the urban environment. My process of working is one of growth and transformation of the original concept to something that transmutes into a life of its own, with originality and spirit. I enter into a dialogue with the material and allow it great latitude in how it is going to let my concept manifest. As the work proceeds, it tells me the next step to take. There is a magic moment in the life of every new work, when it speaks to me and says, 'Yes! I exist! I can now take my place in this world. I feel whole and complete.' This continuing series is slowly changing itself to reflect the environmental concerns of the planet. The blackened tree trunk is held in reverence, warning that this once precious life could be nothing but a burnt memory."

About the Seller
4.8
Located in Bloomfield, Canada
Recognized Seller
These prestigious sellers are industry leaders and represent the highest echelon for item quality and design.
Platinum Seller
These expertly vetted sellers are 1stDibs' most experienced sellers and are rated highest by our customers.
Established in 2004
1stDibs seller since 2013
292 sales on 1stDibs
Typical response time: <1 hour
More From This SellerView All
You May Also Like