H 15.5 in. W 60.5 in. D 30.25 in.
Vintage Coffee Table by Cesare Lacca, Italy, Mid-20th Century
By Cesare Lacca
Located in Roma, IT
Coffee table is an original design furniture realized by Cesare Lacca in the mid-20th Century. Beautiful small table, Italian design in wood and glass top. Born in Naples in 19...
Category 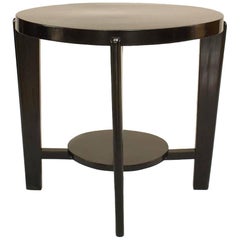 H 22 in. W 39.5 in. D 26 in.
Spanish 18th Century Cheese Making Board, Coffee Table
Located in Atlanta, GA
An exceptional and grand scale Cheese Making Board from the Catalan region of Spain - now as a table basse - coffee table. Soundly constructed from 2 very thick planks of naturally w...
Category

H 14 in. Dm 36 in.
Antique Victorian Coffee Table / Stool
Located in London, GB
An excellent antique Victorian coffee table, probably originally designed as a stool but useful as both. This was made in England, it dates from the 1860-80’s. It is of super qual...
Category

H 18 in. W 28 in. D 16 in.
Antique 18th-Century Rustic Spanish Warm Brown Chestnut Coffee Table
Located in Casteren, NL
This beautiful warm brown color rustic coffee table or low table originates in rural Spain and dates circa 1750. The table has a fantastic top that was made from two boards of solid ...
Category

H 20 in. W 45 in. D 38 in.
Asian Chinese Daybed/Coffee Table
Located in New York, NY
Asian Chinese (Shanxi Province) mid-19th century elmwood (yu-mu) grained daybed/coffee table with a solid top and carved cloud form scrolls on either side of the legs on the apron.
Category

H 22.5 in. W 77.75 in. D 25.25 in.
19th Century French Oak Coffee Table
Located in High Point, NC
19th century French coffee table made from oak. The top is banded and has a carved decorated beveled edge, following down to a simple apron, which is hand decorated with carvings of ...
Category

H 20.67 in. W 37.01 in. D 31.5 in.
Very Stylish Round Retro Coffee Table
Located in Chillerton, Isle of Wight
Very stylish round retro coffee table This is a good sturdy table, it has a very attractive solid pine top. The base of the table is a traditional tubular bent leg design The t...
Category

H 21 in. W 43.75 in. D 29 in.
Antique 19th Century Warm Brown Three Drawer Elm Spanish Coffee Table
Located in Casteren, NL
This beautiful warm brown rustic coffee table or low table originates in Spain and dates circa 1850. The table has a beautiful top that was made from a single board of solid elm and ...
Category

H 11.82 in. W 29.73 in. D 16.15 in.
Antique 18th-Century Rustic Spanish Chestnut Coffee Table with Geometric Carving
Located in Casteren, NL
This beautiful dark brown rustic coffee table or low table originates in Spain and dates circa 1750. The table has a beautiful top that was made from one single board of solid ches...
Category

H 15.75 in. W 31.5 in. D 31.5 in.
Walnut Coffee Table by Gillow and Co
Located in Cheshire, GB
Walnut aesthetic coffee table by Gillow and Co, the oval top with crossbanded edge raised up on gilded reeded columns terminating in splay supports. This table has been reduced to co...
Category

H 12.25 in. W 30.25 in. D 30.25 in.
Tyrollean Baroque Coffee Table, Austria, circa 1750
Located in Miami, FL
From the Tyrol region in the Austrian Alps, a charming Baroque table, rich with the patina of age, in ash with box stretcher and one drawer. Table was shortened for use as a coffee t...
Category

H 15.75 in. W 45.28 in. D 26.38 in.
Biedermeier Coffee Table, 1830s, Austria-Hungary
Located in Prague 8, CZ
An antique, very elegant table from the Biedermeier period. Made around 1830 in the territory of the former Austria-Hungary Empire. Made of walnut wood. In excellent condition, compl...
Category

H 30.71 in. W 24.02 in. D 24.02 in.
Antique Coffee Table With Spindle Trestle Base, Spain
Located in Round Top, TX
This highly unusual coffee table is a special find. The heavily turned trestle base, wood pegs (vs nails), simple inlay in the single drawer and even the wood inlay repairs seen in t...
Category

H 20 in. W 39.5 in. D 20 in.
Chunky Two-Drawer Walnut Coffee Table with Cleated Top
Located in Port Chester, NY
A chunky dark walnut coffee table in a nice versatile size. The top is made of two complementary slabs to create a beautiful grain pattern. There are two useful drawers in the apron,...
Category

H 18 in. W 60 in. D 60 in.
Antique 18th-Century Rustic Spanish Dark Brown Chestnut Coffee Table
Located in Casteren, NL
This beautiful dark brown color rustic coffee table or low table originates in rural Spain and dates circa 1760. The table has a great top that was made from a single board of solid ...
Category

H 22.05 in. W 65.36 in. D 26.38 in.
Antique Elm Coffee Table with a Floating Top
Located in Port Chester, NY
A dark elm coffee table with rich color, good patina, and a twist. This coffee table has a floating top that slides back and forth to reveal a secret compartment. Perfect for hiding ...
Category

H 22 in. W 36.5 in. D 41 in.
Austrian Coffee Table in Ash and Walnut, circa 1840
Located in Miami, FL
A handsome coffee table with ash wood top banded in walnut resting on bulbous-turned legs that end in bun feet with "X" stretcher. Austro-Hungarian, circa 1840. Table height was modi...
Category

Austrian Coffee Table in Ash and Walnut, circa 1840

H 24 in. W 48 in. D 37 in.
Get Updated with New Arrivals
Save "Antique Mid Century Coffee Table", and we’ll notify you when there are new listings in this category.

How Much is a Antique Mid Century Coffee Table?

Find the perfect centerpiece for any room, no matter what your personal furniture style on 1stDibs. Browse a vast selection of antique, new and vintage coffee and cocktail tables today.