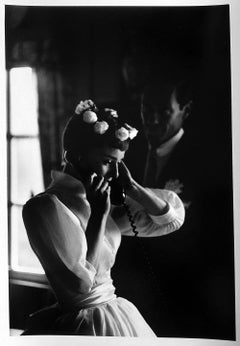 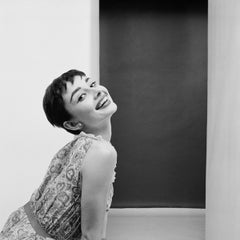 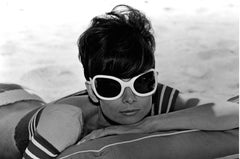 H 24 in. W 34 in.
Audrey Hepburn
By Terry O'Neill
Located in Chicago, IL
Actress Audrey Hepburn in a white hat and sunglasses for her role in William Wyler's 1966 comedy &quot;How to Steal a Million.&quot; Paper size: 20 H x 16 W inches Edition of 50. ...
Category

H 20 in. W 16 in. D .25 in.
Audrey Hepburn
By Cecil Beaton
Located in New York, NY
Print is stamped by the photographer's estate.
Category 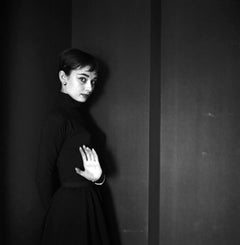 H 14 in. W 11 in.
Audrey Hepburn
By Douglas Kirkland
Located in Vienna, AT
Douglas Kirkland born in Toronto Canada is one of the greatest photographers in the world. He photographed people from Marilyn Monroe, Charlie Chaplin and Brigitte Bardot to Andy War...
Category 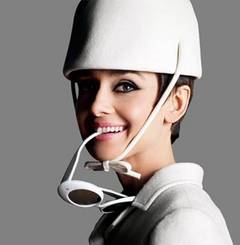 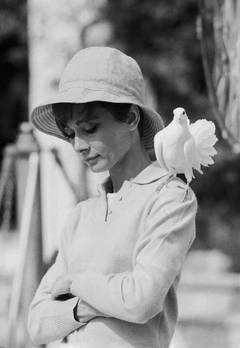 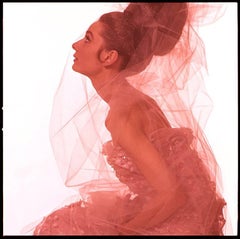 H 20.25 in. W 17.75 in.
Audrey Hepburn Dove
By Terry O'Neill
Located in Greenwich, CT
Audrey Hepburn was a British actress and model, active during Hollywood’s Golden Age. Starring in classic films, such as Roman Holiday and Breakfast at Tiffany’s. In the age of Eliza...
Category

H 20 in. W 16 in.
Audrey Hepburn 1955
By Norman Parkinson
Located in Beverly Hills, CA
British actress and model Audrey Hepburn photographed for US Glamour magazine at ‘La Vigna’ villa, near Rome, Italy whilst between filming of King Vidor’s “War and Peace”, in August ...
Category

H 16 in. W 20 in.
Incognito. Audrey Hepburn
By Robin Austin
Located in New York, NY
Robin Austin has always been a storyteller – whether earlier in his career, marketing successful global companies, or as the co-founder and creative visionary of Fusion 5, a global b...
Category

H 36 in. W 24 in.
Audrey Hepburn with Broom
By Milton Greene
Located in Beverly Hills, CA
Other prices available Audrey Hepburn at her Italian Villa with a broom, 1955 Milton H. Greene (1922-1985), created a vast body of work consisting of our most beloved artists, musi...
Category

H 24 in. W 34 in.
Audrey Hepburn Pool Smile
By Terry O'Neill
Located in Beverly Hills, CA
Unframed Other sizes available Actress Audrey Hepburn, pictured in the South of France during the filming of ‘Two for the Road’ on 4th September 1966. British photographer, Terry ...
Category

H 72 in. W 55 in.
Audrey Hepburn Pool (color)
By Terry O'Neill
Located in Greenwich, CT
Audrey Hepburn was a British actress and model, active during Hollywood’s Golden Age. Starring in classic films, such as Roman Holiday and Breakfast at Tiffany’s. In the age of Eliza...
Category

H 22 in. W 17 in.
AUDREY HEPBURN, PARIS 1965
By Douglas Kirkland
Located in PARIS, FR
LIMITED EDITION OF 24 TOTAL , NUMBERED AND SIGNED ON THE FRONT BY DOUGLAS KIRKLAND For more than 50 years, Douglas Kirkland has created photographs that capture the world’s most icon...
Category

H 25.6 in. W 25.6 in. D 1.97 in.
Audrey Hepburn, Times Square
By Lawrence Fried
Located in Beverly Hills, CA
Additional Sizes Available Actress Audrey Hepburn photographed in Broadway, whilst appearing on Broadway in ‘Gigi’. This story was part of a multi-day photo shoot for Esquire magazi...
Category

H 16 in. W 12 in.
Audrey Hepburn, The Hug
By Lawrence Fried
Located in Beverly Hills, CA
Additional Sizes Available Actress Audrey Hepburn photographed in Broadway, whilst appearing on Broadway in ‘Gigi’. This story was part of a multi-day photo shoot for Esquire magazi...
Category

H 20 in. W 24 in.
Audrey Hepburn in Pool
By Terry O'Neill
Located in Westwood, NJ
This photograph was taken on the set of 'Two for the Road'. Terry O’Neill’s candid photojournalistic portraits of creative and political luminaries have included Brigitte Bardot, Th...
Category

H 16 in. W 20 in.
Audrey Hepburn, Paris 1965
By Douglas Kirkland
Located in Beverly Hills, CA
Limited Edition, Hand-Signed and Numbered by Douglas Kirkland. Douglas Kirkland's fine art photography has been exhibited all over the world. His exhibition of Freeze Frame is now i...
Category

H 30 in. W 40 in.
Audrey Hepburn With Dove
By Terry O'Neill
Located in Beverly Hills, CA
A smiling Audrey Hepburn with a dove perched on her shoulder, 1966. Other Editions Include: 20x24 30x40 40x60 British photographer, Terry O’Neill, has photographed presidents, p...
Category

H 24 in. W 20 in. D .01 in.
Audrey Hepburn, Times Square
By Lawrence Fried
Located in Greenwich, CT
Edition of 25 Larry, as he was known throughout the industry, was an award-winning photojournalist, who covered the political, social, and artistic events of his time for top publica...
Category

H 20 in. W 24 in.
Audrey Hepburn with Flowers
By Norman Parkinson
Located in Santa Monica, CA
Norman Parkinson (1913-1990) was one of the twentieth century's best-known fashion photographers. He was active for over 50 years and was instrumental in taking portrait and fashion ...
Category

H 24 in. W 20 in.
Audrey Hepburn - Unique piece
By Daniel Voelker
Located in Munich, DE
This piece of art is made of 3003 stamps. In Stamp Mosaics different narrative strands are linked. The individual postage stamps represent important historical events as well as por...
Category

Find a variety of audrey hepburn photographs available on 1stDibs. Finding the ideal Modern, Contemporary or Pop Art examples of these works for your living room, whether you’re looking for small- or large-size pieces, is no easy task — start by shopping our selection today. These items have long been popular, with older editions for sale from the 20th Century and newer versions made as recently as the 21st Century. You can search the audrey hepburn photographs that we have for sale on 1stDibs by color — popular works were created in bold and neutral palettes with elements of gray, black, brown and silver. Mark Shaw, Terry O'Neill, Douglas Kirkland, Norman Parkinson and Bob Willoughby took a thoughtful approach to this subject that are worth considering. Each of these unique pieces was handmade with extraordinary care, with artists most often working in digital print, giclée print and inkjet print. Large audrey hepburn photographs can be an attractive addition to some spaces, while the smaller iterations available — each spanning 10 inches in width — may make for a better choice for a more modest living area.

How Much are Audrey Hepburn Photographs?

Prices for pieces in our collection of audrey hepburn photographs start at $395 and top out at $32,806 with the average selling for $1,500.

Questions About Audrey Hepburn Photographs
Prices for most audrey hepburn photographs on 1stdibs are negotiable. You’ll see a "Make an Offer" button on the item details page, indicating that the seller is willing to consider a lower price. It’s not uncommon for customers to get 15–25% off the list price after negotiating. See our tips for negotiating like a pro.
Only experienced, professional sellers who have applied and been thoroughly vetted by our team of experts can sell audrey hepburn photographs and other quality items on our site. Learn more about becoming a 1stdibs seller.
The 1stdibs Buyer Protection Guarantee provides coverage for qualified purchases in the unlikely event that the item arrives not as described or is damaged. We’ll work with you and the seller to find a resolution, ensuring your satisfaction. View details
We have partnerships with the world's best shipping providers to facilitate seamless and fully-insured delivery from the seller's location directly to you, wherever you are in the world. Our logistics team is comprised of dedicated members who arrange all the details with our partners, servicing and supporting all shipments. Learn more about shipping on 1stdibs.
For your convenience, we offer multiple payment methods, including all major credit cards and PayPal. For many purchases we also offer financing options or wire transfer. Learn more about payment options on 1stdibs.