H 5.71 in. W 9.45 in. D 5.71 in.
Balkio, Animal Bronze Sculpture of a Bulldog
By Jacques Owczarek
Located in Paris, FR
This bulldog in bronze by French contemporary artist Jacques Owczarek takes shape through a series of lines, edges and curves. The peculiarity of the artist's interpretation comes to...
Category

H 17.33 in. W 14.57 in. D 19.69 in.
French Bulldog
By Leo Sewell
Located in Greenwich, CT
Leo Sewell (b. 1945) is an American "found object" artist. His assemblages of recycled material are in over 40 museums and in private collections worldwide. Sewell was born in Anna...
Category 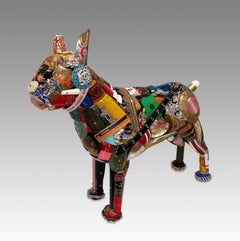 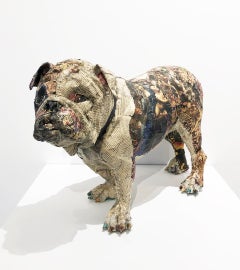 H 27 in. W 20 in. D 34 in.
Set of 3 cold painted Austrian bronze sculptures of Bulldogs
By Franz Xaver Bergman (Bergmann)
Located in Moreton-In-Marsh, Gloucestershire
In the manner of Franz Bergman Austrian, (C1900) Set of 3 Bulldogs Bronze A set of 3 Austrian cold painted bronze sculptures of bulldogs in the manner of by Franz Bergman with lovely...
Category

H 47.25 in. W 39.38 in. D 23.63 in.
Porcelain French Bulldog, Boston Terrier Sculpture with Green Collar
Located in Antwerp, BE
French bulldog sculpture or Boston terrier sculpture of porcelain. It's a white with dark grey bulldog wearing a green collar. A dog sculpture to add to your collection. He does ...
Category

H 6.89 in. W 2.96 in. D 5.12 in.
Antique Terracotta Dog English Bulldog Animal Sculpture, England
Located in Munich, DE
The finely modeled sculpture in the shape of a English bulldog is made out of terracotta and has glass eyes. It was made in England between circa 1860-1870.
Category

H 14.5 in. W 10 in. D 10 in.
Ceramic Bulldog
By Mouzin Pottery, Frédéric Thurner
Located in New York, NY
Life-size Belgium ceramic bull dog in tan, brown and cream colors with blue eyes complimenting blue and gold collar with large gold hoop. Back of dog open for use as umbrella or stic...
Category

H 22 in. W 12 in. D 8 in.
Franz Xavier Bergmann, French Bulldog, Miniature Vienna Bronze Sculpture, 1900
By Franz Bergmann
Located in New York, NY
Noted for his detailed and colorful work, Bergman was signing his creations with either a "B" in an urn-shaped cartouche, or "Nam Greb" - for "Bergman" in reverse (these marks used t...
Category

H 2.75 in. W 3 in. D 1.75 in.
Art Deco Sculpture Bulldog Paperweight Car Mascot Max Le Verrier, 1930
By Max Le Verrier
Located in Antwerp, BE
Art Deco sculpture of a bulldog by Max Le Verrier, France, 1930. Patinated art metal on a marble base. This model is illustrated as car mascot in the book: “Mascottes passion” b...
Category

H 4.14 in. W 9.85 in. D 5.91 in.
Big red cloned French Bulldog
By William Sweetlove
Located in Malmo, SE
Original sculpture 8 ex. Acquired directly from the artist. Temporality and eternity are two concepts that increasingly compete in my work. I have always been interested in fos...
Materials

H 7.09 in. W 4.73 in. D 2.56 in.
Antique Umbrella with French Bulldog Handle
Located in Antwerp, BE
Antique umbrella with a French bulldog handle or bulldog pommel with glass eyes. This brolly or parasol with a hand carved wooden animal handle or carved wood knob head is a collect...
Category

H 22.64 in. Dm 2.17 in.
Art Deco French Bulldog Ashtray of chalkware
Located in Antwerp, BE
Art Deco Chalkware Ashtray with a French Bulldog Sculpture on. The Bulldog Statue has glass eyes and big ears. This painted plaster ashtray from the Early 20th Century can be used a...
Category

Vintage French Bulldog on Agate Base

Bronze Figure of a Bulldog, by Friedrich Gornik

H 6.5 in. W 11 in. D 4 in.
Antique Cold Painted Vienna French Bulldog, Bergman Style
By Bergmann Foundry
Located in Petaluma, CA
This terrier is remarkably detailed and richly hand painted. One of the nicer examples you will find. While unsigned, we believe it was done by the Bergmann Foundry. It is nice size ...
Category

H 4 in. W 4.5 in. D 2 in.
Hubley Cast Iron Terrier Bulldog Doorstop, circa 1925
By Hubley Manufacturing Company 2
Located in Port Jervis, NY
Fabulous cast iron bulldog doorstop by Hubley c1925. Seem to be original paint, definitely not recent. Have another bulldog in a different listing. .
Category

H 2.96 in. W 2.76 in. D 2.37 in.
Art Deco Pen Holder with French Bulldog, 1940s
Located in Antwerp, BE
Art Deco desk set - pen holder - paper weight - Desk Accessory with a French bulldog on top. This Animal Themed Pen Holder has a brown and white Marble Base with a bronze bulldog d...
Category

H 18.5 in. W 31.5 in. D 13 in.
Antique Austrian Lifelike Figure of a Seated Brown British Bulldog
Located in London, GB
A lifelike size figure of a British Bulldog in the manner of Goldscheider, potted in terracotta and realistically hand-painted.
Category

H 6.11 in. W 4.34 in. D 3.55 in.
Art Deco Bulldog Still Bank, Money Bank, Gold Painted Metal
Located in Antwerp, BE
Cute Gold Painted Metal Bulldog Money Bank . This Moneybox Bulldog Dog Figurine has Big Eyes which are looking into yours, so you can't say no to him. It's a Detailed Bulldog Figuri...
Category

Bulldog Sculpture For Sale on 1stDibs

With a vast inventory of beautiful furniture at 1stDibs, we’ve got just the bulldog sculpture you’re looking for. Frequently made of ceramic, metal and bronze, every bulldog sculpture was constructed with great care. You’ve searched high and low for the perfect bulldog sculpture —, we have versions that date back to the 19th Century alongside those produced as recently as the 20th Century are available. When you’re browsing for the right bulldog sculpture, those designed in Art Deco, Art Nouveau and Mid-Century Modern styles are of considerable interest. Many designers have produced at least one well-made bulldog sculpture over the years, but those crafted by Franz Bergmann, Jennings Bros. And Dahl Jensen are often thought to be among the most beautiful.

How Much are Bulldog Sculpture?

A bulldog sculpture can differ in price owing to various characteristics — the average selling price 1stDibs is $1,052, while the lowest priced sells for $241 and the highest can go for as much as $30,794.