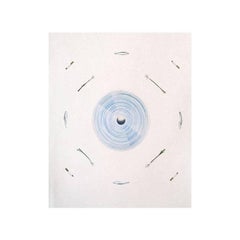 Ed Ruscha
The Fan and its Surroundings (from the Global Editions Series), 1982

H 22 in. W 36 in.
Ed Ruscha 'Other' Lithograph 2004
By Ed Ruscha
Located in New York, NY
Ed Ruscha 'Other' 2004 Signed, numbered and dated to lower edge Part of an edition of 250 Please reach out with any questions!
Category

H 15.12 in. W 18 in.
If -- Print, Lithograph, Text Art by Ed Ruscha
By Ed Ruscha
Located in London, GB
ED RUSCHA If, 1991 Lithograph in colours, on white Rives BFK paper Signed, numbered, and dated from the edition of 50 Printed by Hamilton Press, Venice, California Published by Creat...
Category

H 8.27 in. W 5.87 in.
Lisp
By Ed Ruscha
Located in London, GB
Lithograph printed in colours, 1970. Signed and dated in pencil, numbered from the edition of 90. Printed on Arches paper by Cirrus Editions, Los Angeles. Published by Cirrus Edition...
Category

H 36 in. W 19.25 in.
Sin Without (C.T.P. 1/2)
By Ed Ruscha
Located in Austin, TX
Published By: Akasha, Minneapolis Printed By: Steven Anderson Additional Information: Renowned California artist Ed Ruscha is known for the extensive use of text in his works. Ofte...
Category

H 22 in. W 30 in.
Sin Without (Blue)
By Ed Ruscha
Located in Miami, FL
Edition of 60 This piece is pencil signed and numbered.
Category

H 22 in. W 14 in.
Sponge Puddle
By Ed Ruscha
Located in Albuquerque, NM
Ed Ruscha (b. 1937) is one of the most influential contemporary artists working today and is associated with California Conceptualism and the Pop Art movement. In 1956, Ruscha moved ...
Category

H 8 in. W 10 in.
If I Was You
By Ed Ruscha
Located in West Hollywood, CA
3 color lithograph Edition of 35
Category

You are likely to find exactly the ed ruscha lithograph you’re looking for on 1stDibs, as there is a broad range for sale. Find Pop Art versions now, or shop for Pop Art creations for a more modern example of these cherished works. Making the right choice when shopping for a ed ruscha lithograph may mean carefully reviewing examples of this item dating from different eras — you can find an early iteration of this piece from the 18th Century and a newer version made as recently as the 21st Century. On 1stDibs, the right ed ruscha lithograph is waiting for you and the choices span a range of colors that includes gray, beige, blue and black. Finding an appealing ed ruscha lithograph — no matter the origin — is easy, but Ed Ruscha, (After) Ed Ruscha and Edward Ruscha each produced popular versions that are worth a look. Frequently made by artists working in lithograph, archival paper and paper, these artworks are unique and have attracted attention over the years.

How Much is a Ed Ruscha Lithograph?

The price for an artwork of this kind can differ depending upon size, time period and other attributes — a ed ruscha lithograph in our inventory may begin at $350 and can go as high as $65,000, while the average can fetch as much as $10,617.

Indisputably one of the most iconic American artists of the 20th century, Ed Ruscha has built a formidable body of work by staking a claim on the deceptively simple intersection of text and image, superimposing elliptical phrases (or, often, single words) over West Coast landscapes to create paintings and prints that can be read instantaneously yet evade easy understanding.

A pioneer of the 1960s Los Angeles art scene as part of the famed Ferus Gallery — alongside artists like Robert Irwin and Billy Al Bengston — Ruscha's embrace of Hollywood vernacular and the open Western road have tied him as closely to the identity of L.A. art as Jackson Pollock is with that of New York.

Coming to California in 1956 at the age of 18, Ruscha intended to become a commercial painter but found himself drawn to fine art, over time being shaped by three galvanizing influences: Marcel Duchamp, Pop art and the movies. Meeting Duchamp when the Pasadena Art Museum (now the Norton Simon Museum) hosted the French conceptual artist's first U.S. show, Ruscha was especially affected by his use of "readymade" objects and imagery, rendered unfamiliar through unexpected titles or text. Warhol's Campbell's Soup can paintings, meanwhile, were shown for the first time at the Ferus Gallery in 1962, opening up new vistas for Ruscha. Movies, then, provided another inspiration through their use of title cards, placing graphic text over filmic shots—The End, for instance — for maximum impact.

Ruscha began his famous series of word paintings in the 1960s, depicting various views of the Hollywood sign and the logos of studios like 20th Century Fox, but also roadside views like the Standard Oil stations dotting L.A.'s freeways. Over time these became more abstracted, pinning ambiguous, free-floating phrases (Wall Rockets is a famous example) to natural vistas, scenes of highways, or monochrome backgrounds. Beginning in about 1980, the artist began using a sharp font he designed himself, called Boy Scout Utility Modern.

A master printmaker who also works across the mediums of books, drawing, photography and even film — in 2009 he starred in a movie directed by the artist Doug Aitken — Ruscha has been an influence on a staggering array of artists, including Stephen Shore, Christopher Wool and Anselm Kiefer. His work has been featured in dozens of exhibitions around the world, including "Ed Ruscha: 50 Years of Painting" at London's Hayward Gallery (2009), "Ed Ruscha: Made in Los Angeles" at Madrid's Reina Sofia in 2002, a 2000 retrospective at the Hirshhorn Museum and Sculpture Garden, a survey of his works-on-paper at the J. Paul Getty Museum in 1998, and a 1982 retrospective that traveled to the Whitney Museum. In 2005 he represented the United States at the 51st Venice Biennale, and in 2009 he received a National Arts Award.

Find a collection of original Ed Ruscha art on 1stDibs.