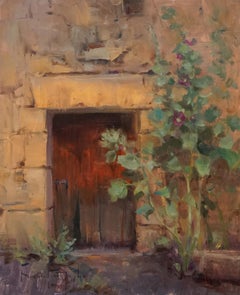 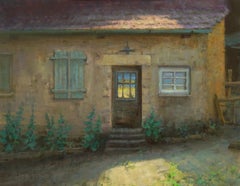 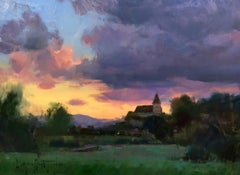 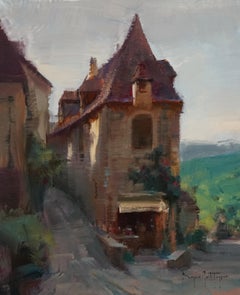 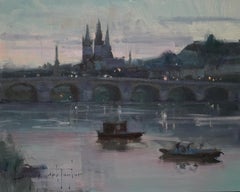 H 8 in. W 10 in. D 2 in.
Modern Impressionist French Plein air Landscape oil "Village of The Loire Valley
By Bryan Mark Taylor
Located in Laguna Beach, CA
"Village Of The Loire Valley" captures the timeless beauty and feeling of a French town in the country, and is an excellent example of Bryan Mark Taylor's modern approach to Impressi...
Category

H 12 in. W 16 in. D 2 in.
"Mountain In Shadow" Contemporary Impressionist Oil of French Alps
By Maria Bertran
Located in Laguna Beach, CA
"Mountain In Shadow" is a beautiful oil painted on location in the French Alps by Maria Bertran. This Contemporary Impressionist painting captures a timeless scene in the mountains. ...
Category 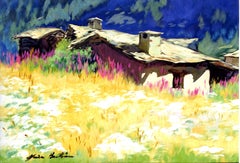 H 17.75 in. W 15.5 in. D 1.5 in.
Dusk - 19th Century Oil, French Village Night-time Landscape by Henri Duhem
By Henri Duhem
Located in Marlow, Buckinghamshire
Oil on panel. Signed lower left and dated verso. This piece is not currently framed but a suitable frame can be sourced if required. Henri Duhem was descended from an old Flemish fa...
Category

Angela Wakefield
Original Painting of a Field of Sunflowers in Sunshine France by British Artist, 2012

H 29 in. W 23 in. D 1.75 in.
Painting of Vineyard in Wine Growing Bordeaux France by Modern British Artist
By Angela Wakefield
Located in Preston, GB
Original Painting of a Vineyard in the Wine-Growing Region of Bordeaux, France, by leading British Contemporary Landscape Artist, Angela Wakefield. During 2012, Angela embarked upon ...
Category

H 23.5 in. W 34 in.
Afternoon Reflections, original French impressionist landscape
By Blanche McAlister Harris
Located in Spring Lake, NJ
An afternoon in Provence, France, with the subtly glistening water and the reflections of times present that are indeed centuries old. The soft colors of summer further invite you t...
Category

H 38.5 in. W 38.5 in. D 2.5 in.
French Seashore, original 24x48 French impressionist landscape
By Leonard Mizerek
Located in Spring Lake, NJ
The French Seashore, has long been famous for it's quality of light attracting many of the great impressionists of all time as well as for it's elegant, chic aura. Combine clarity of...
Category

H 32 in. W 56 in. D 1.25 in.
Book Stalls of Paris, original French impressionist landscape
By Leonard Mizerek
Located in Spring Lake, NJ
Paris is resplendent with charm and lifestyle, none more Parisian than the book stalls along the Seine. Combine French sophistication and intellectual inquisitiveness with romance o...
Category

H 26 in. W 30 in. D 2.5 in.
Loire Reflections, original 30x40 French impressionist landscape
By Jim Rodgers
Located in Spring Lake, NJ
The famed Loire Valley west of Paris, France is where dreams are reality. Drive past Rambouillet towards the Chateau d'Artigny and luxuriate in the many chateaus set upon manicured ...
Category

H 40 in. W 49.5 in. D 2.25 in.
Vineyard and Farmhouse, Provence, original French impressionist landscape
By R. Kirk Moore
Located in Spring Lake, NJ
Provence, France, in bloom is like living in a dream with the deep, jewel like colors, awash with activity. Artist R. Kirk Moore's use of short brushstrokes, impasto layering of hi...
Category

H 18 in. W 22 in. D 2 in.
Picnic With A View, French Impressionist Landscape, Signed Oil Painting
By Sadda
Located in Cirencester, Gloucestershire
Picnic with a View French School, circa 1980's signed to the lower right oil painting on board, unframed 7.5 x 9.5 inches very good condition
Category

H 7.5 in. W 9.5 in. D 1 in.
French Impressionist landscape painting of a Hay Harvest - Summer - Monet
Located in Antwerp, BE
Peaceful impressionist painting depicting a hilly countryside landscape with "meals" of hay. This work is painted in typical impressionist manner, the sunlight beautifully reflects i...
Category

H 18 in. W 21.5 in.
French Impressionist Landscape Lithograph Edition 30 of 275
By Jean Marzelle
Located in Houston, TX
French impressionist landscape lithograph by Jean Marzelle (1916 - 2005) who lived and worked in France and was known for painting. The work consists of greens, blues, yellows, and o...
Category

H 23 in. W 27 in. D 2 in.
Landscape With Flowers French Impressionist
Located in Lake Worth, FL
Landscape with pink flowers. Paul Anderbouhr ( Paris, September 23, 1909 - Casablanca, July 10, 2006) is a French painter landscaper, he became interested in African scenes after th...
Category

H 7.5 in. W 9.5 in. D 1 in.
Impressionist French Cafe Landscape
Located in Douglas Manor, NY
3707 Oil on canvas applied to board Set in a hand painted vintage wood frame
Category

H 11.25 in. W 13.5 in. D 1 in.
French Impressionist Oil Painting Provencal Landscape
Located in Cirencester, Gloucestershire
Delightful French oil painting on canvas depicting this rustic Provencal house and buildings within a sun scorched landscape. The painting dates to the second half of the 20th cent...
Category

H 14 in. W 10 in.
French Impressionist countryside landscape Hay - Van Gogh Peaceful
Located in Antwerp, BE
Peaceful French impressionist painting depicting harvested hay in the country side. To the left there is a large "meule" of hay and to the right we can see a farmer returning home wi...
Category

H 13 in. W 9.75 in.
Antique Edmund Petitjean French Impressionist River Landscape Painting
By Edmond Marie Petitjean
Located in New York, NY
Edmond Marie Petitjean (1844-1925) was a French painter known who devoted his life to art and was self-taught. He painted various landscapes and seascapes. He is best known for his d...
Category

H 9.75 in. W 12.5 in.
Fauvist Post Impressionist French Canadian Landscape
By Yehouda Chaki
Located in New York, NY
Unbelievable 1970's Post Impressionist Abstract Fauvist Landscape by Yehouda Leon Chaki (B 1936). He is famous artist who currently works out of Montreal, and has built a worldwide ...
Category