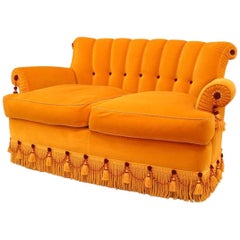 H 41.5 in. W 66 in. D 29 in.
Christopher Guy Tufted Loveseat
By Christopher Guy
Located in New York, NY
Christopher guy tufted loveseat. It has a gold giltwood frame, a purple tufted back with four additional pillows. The seat cushion and pillows are down-filled.
Category

H 76 in. W 72 in. D 42 in.
Red-Striped Rococo Loveseat with Gold Leaf by Modenese Interiors
By Modenese Gastone
Located in PADOVA, IT
Add a classic touch to your private mansion living areas with this slim and lovely two-seater loveseat by Modenese Luxury Interiors, showing up in one of our baroque catalogues. It f...
Category

H 45.5 in. W 59 in. D 29 in.
Delicate Loveseat in White Tones and Grey Upholstery by Modenese
By Modenese Gastone
Located in PADOVA, IT
Wrap up your classy villa living areas with this slim and delicate two-seater loveseat by Modenese Luxury Interiors, showing up in one of our most sold catalogues. It features an ivo...
Category

Delicate Loveseat in White Tones and Grey Upholstery by Modenese

H 38.98 in. W 48.82 in. D 27.56 in.
White and Grey Loveseat by Modenese with Telephone Stand and Drawer
By Modenese Gastone
Located in PADOVA, IT
Modenese can take over your whole interior design project. As shown by its huge collections, baroque and classic living are a true specialty for the Italian brand. This bright lovese...
Category

White and Grey Loveseat by Modenese with Telephone Stand and Drawer

H 35.25 in. W 52.75 in. D 30 in.
Karoo Sofa and Loveseat in Gold Satin With Fully Upholstered Legs
By Brabbu
Located in New York, NY
A semi-desert area in South Africa was the perfect environment to be the theme for Karoo two-seat sofa, with the same name as this vast African landscape. The yellow tones of this ar...
Category

Andreas Wargenbrant "My Love to Louboutin" Sculpture in Gilded Bronze No. 3/8

H 40 in. W 39 in. D 21 in.
Antique Carved Oak Bench Loveseat with Painted Gold Gilt Highlights
Located in Round Top, TX
Antique oak bench or loveseat with upholstered seat with hand carved details in relief. The back rest is embellished with a number of carved motifs including flowers and other flouri...
Category

H 49 in. W 48.5 in. D 23 in.
Sculptural Mid-Century Modernist Loveseat in Smoked Gold Velvet Upholstery
Located in New York, NY
This stunning Mid-Century Modernist floating Loveseat consists of a fully upholstered seat in smoked gold velvet with splayed arms with a soft and comfortable seat supported by a scu...
Category

H 30.5 in. W 57 in. D 31.5 in.
1950s Modern Curved Italian Loveseat / Settee in Vintage Gold Floral Velvet
By Paolo Buffa
Located in Houston, TX
Refined Italian love seat from the 1950s in its original gold floral velvet. Sure to add a touch sophistication to any home or lobby. Matching lounge chairs available as well.
Category

Gold Loveseat For Sale on 1stDibs

Choose from an assortment of styles, material and more with respect to the gold loveseat you’re looking for at 1stDibs. Frequently made of fabric, wood and metal, every gold loveseat was constructed with great care. There are 18 variations of the antique or vintage gold loveseat you’re looking for, while we also have 2 modern editions of this piece to choose from as well. Your living room may not be complete without a gold loveseat — find older editions for sale from the 19th Century and newer versions made as recently as the 21st Century. A gold loveseat is a generally popular piece of furniture, but those created in Louis XVI, Mid-Century Modern and Modern styles are sought with frequency. You’ll likely find more than one gold loveseat that is appealing in its simplicity, but Achille Salvagni, Andreas Wargenbrant and Christopher Guy produced versions that are worth a look.

How Much is a Gold Loveseat?

Finding the Right Loveseats for You

Antique and vintage loveseats are functional and totally charming furniture in homes large and small these days. They first appeared in the 17th and 18th centuries, though they were not yet known by this endearing term.

These petite, two-seat sofas were originally intended to comfortably sit a woman clad in what were the era’s large and elaborate dresses — ornate hooped garments with copious folds of fabric, embroidery and lace. However, because the original seats featured just enough space for two, they quickly became popular for couples that were courting. Loveseats meant that the couples could engage in close conversation, but furniture makers ensured that there was enough space between sitters to prioritize modesty.

In the early days of loveseats, the furnishings were minimalist in appearance and could often be found in an s-shape, with the two sides facing each other. The spare seating was initially little more than a wooden bench, as loveseats weren’t yet upholstered or cushioned. Design of the seating evolved over time, and this wide chair was eventually padded and tufted for comfort. During the 1800s, loveseats were a luxurious addition to the homes of the wealthy, and even today, antique 19th-century loveseats are still quite alluring. In any lavishly decorated parlor of the Victorian era, you might find a pair of partygoers tucked into a particularly plush iteration of these cozy perches, one boasting arched crests of carved mahogany over its sculpted seats, with front cabriole legs resolving in paw feet.

In modern homes, loveseats — even antique Victorian loveseats — pair well with oversize sofas or are ideal replacements for sofas, particularly if you’re working on organizing and furnishing a smaller space. A loveseat is a stylish addition to a home library or a reading nook and can easily be situated at the foot of the bed in your bedroom. In the living room, you may wish to position your vintage loveseat and couch around a central focal point, such as a distinguishing architectural feature or a fireplace. But be sure to leave some walking room between your seating and any nearby coffee tables or side tables. Allow for around two feet for guests to pass between a couch and chair or loveseat and at least a foot between a loveseat and coffee table.

Find a wide variety of antique, new and vintage loveseats today on 1stDibs.