H 8 in. W 16 in.
Oil on Canvas by Harry Leith-Ross Hunter and Dog
By Harry Leith-Ross
Located in Toledo, OH
Harry Leith-Ross (1886-1973), is a renowned landscape artist born in Mauritius in 1886 and died in Pennsylvania in 1973. He had a long term association with the Bucks County artists'...
Category

Oil on Canvas by Harry Leith-Ross Hunter and Dog

H 34 in. W 42 in. D 3 in.
"Concrete Construction"
By Harry Leith-Ross
Located in Lambertville, NJ
Jim’s of Lambertville is proud to offer this artwork. Signed lower left. Illustrated in "New Hope for American Art" Harry Leith-Ross (1886 - 1973) The son of an English father ...
Category

Harry Leith-Ross
"The Neshaminy", Circa 1935

H 9 in. W 13 in.
Daytura
By Harry Leith-Ross
Located in New York, NY
An accomplished artist noted for his snow-covered landscapes, Leith-Ross is considered one of the most exhibited and decorated artists of the New Hope art colony.
Category

H 23 in. W 19 in. D 1.5 in.
"Sunny Day, Gloucester"
By Harry Leith-Ross
Located in Lambertville, NJ
Signed lower right. With mirror. Harry Leith-Ross (1886 - 1973) The son of an English father and a Dutch mother, Harry Leith-Ross was born in the British Colony of Mauritius, an ...
Category 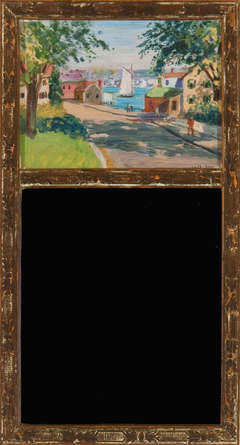 H 15.75 in. W 19.5 in. D .5 in.
Oil on Panel Entitled "Blandford Bay II" by Harry Leith-Ross
By Harry Leith-Ross
Located in West Chester, PA
A New England coastal scene which it titled on verso with artist stamp and it is signed on lower right.
Category

Surely you’ll find the exact harry leith ross you’re seeking on 1stDibs — we’ve got a vast assortment for sale. There are many Impressionist and Abstract versions of these works for sale. Finding the perfect harry leith ross may mean sifting through those created during different time periods — you can find an early version that dates to the 20th Century and a newer variation that were made as recently as the 20th Century. Adding a harry leith ross to a room that is mostly decorated in warm neutral tones can yield a welcome change — find a piece on 1stDibs that incorporates elements of brown, gray, beige, black and more. A harry leith ross from Harry Leith-Ross — each of whom created distinctive versions of this kind of work — is worth considering. Frequently made by artists working in paint, oil paint and board, these artworks are unique and have attracted attention over the years.

How Much is a Harry Leith Ross?

A harry leith ross can differ in price owing to various characteristics — the average selling price for items in our inventory is $18,313, while the lowest priced sells for $850 and the highest can go for as much as $99,375.

Son of an English father and a Dutch mother, Harry Leith-Ross was born in the British Colony of Mauritius, an island in the Indian Ocean thousand miles off the southeast coast of Africa. His first formal art instruction began in England under Stanhope Forbes, followed by studies with Jean-Paul Laurens at the Académie Julian in Paris. Leith-Ross came to the United States to enroll at the National Academy of Design in New York City in 1910, and then to Woodstock, in 1913. It was in Woodstock at the Art Students League, under the tutelage of L. Birge Harrison and John F. Carlson, that Leith-Ross would receive the training that most influenced his career as an artist. There, he formed a lifelong friendship with fellow artist, John Folinsbee. The two artists shared a studio during this time and participated in several joint exhibitions exclusively featuring their work, including an exhibit at the Louis Katz Art Gallery in New York City in 1915. During the First World War, Leith-Ross served in the U.S. infantry, and upon his release, spent a summer painting in England. While there, he participated in a solo exhibition at The Little Gallery in Worthing in 1919. It was said of Leith-Ross by an art critic in a local English newspaper: “An exquisite sense of color, perfect draftsmanship, a thorough grasp of composition and a deep insight into nature, make Harry Leith-Ross not only a brilliant painter but a poet”. Upon returning to the United States, Leith-Ross resided once again in Woodstock where he taught painting. Leith-Ross would often visit his close friend, John Folinsbee, who moved to New Hope in 1916 following his marriage to Ruth Baldwin Folinsbee. Leith-Ross was the best man at his wedding. Some years later, Leith-Ross met Emily, and the couple married in 1925. They remained in Woodstock until purchasing a home in the Jericho Valley on the outskirts of New Hope in 1936, where Leith-Ross remained until the end of his life. He painted a wide array of subjects. His earlier works (1912–30) are very finely painted impressionist landscapes consisting of small, tight brush strokes and a colorful refreshing palette. The early paintings usually depict Woodstock, New Hope and Gloucester. His later works often include figures and his application of paint is lighter. His skillful handling of shadows and light give the later works (1935–60) a striking resemblance to those of Edward Hopper. Many of these paintings depict the landscape surrounding his home in Jericho Valley and the views of New England. Leith-Ross was also a gifted watercolorist. He made occasional trips to Europe and often summered in Rockport and Gloucester, where he held painting classes as well. He exhibited widely and won more than 40 awards. He participated in exhibitions at the National Academy of Design, the Salmagundi Club, the Pennsylvania Academy of the Fine Arts, the Society of Independent Artists, the Corcoran Gallery Biennials, the Carnegie Institute, the Art Institute of Chicago, the American Watercolor Society and the Metropolitan Museum of Art.

Painting is an art form that has spanned innumerable cultures, with artists using the medium to tell stories, explore and communicate ideas and express themselves. To bring antique and vintage paintings into your home is to celebrate and share in the long tradition of this discipline.

When we look at paintings, particularly those that originated in the past, we learn about history, other cultures and countries of the world. Like every other work of art, paintings — whether they are contemporary creations or works that were made during the 19th century — can often help us clearly see and understand the world around us in a meaningful and interesting way. Cave walls were the canvases for what were arguably the world’s first landscape paintings, which depict natural scenery through art. Portrait paintings and drawings, which, along with sculpture, were how someone’s appearance was recorded prior to the advent of photography, are at least as old as Ancient Egypt. In the Netherlands, landscapes were a major theme for painters as early as the 1500s. Later, artists in Greece, Rome and elsewhere created vast wall paintings to decorate stately homes, churches and tombs. Today, creating a wall of art is a wonderful way to enhance your space, showcase beautiful pieces and tie an interior design together.

No matter your preference, whether you favor Post-Impressionist paintings, animal paintings, Surrealism, Pop art or another movement or specific period, arranging art on a blank wall allows you to evoke emotions in a room while also showing off your tastes and interests. A symmetrical wall arrangement may comprise a grid of four to six pieces or, for an odd number of works, a horizontal row. Asymmetrical arrangements, which may be small clusters of art or large, salon-style gallery walls, have a more collected and eclectic feel. Download the 1stDibs app, which includes a handy “View on Wall” feature that allows you to see how a particular artwork will look on a particular wall, and read about how to arrange wall art. And if you’re searching for the perfect palette for your interior design project, what better place to turn than to the art world’s masters of color?

On 1stDibs, you’ll find an expansive collection of paintings and other fine art for your home or office. Browse abstract paintings, portrait paintings, paintings by popular artists and more today.