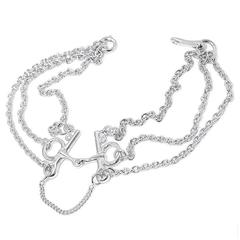 HERMES Yellow Gold Necklace / Bracelet
By Hermès
Located in Beverly Hills, CA
Chic and rare vintage yellow gold lock necklace created by Hermes in the 1970's. It is easily turns into a bracelet. The piece is very wearable and would be a stylish accent to a cas...

Free Shipping
Hermes-Paris Gold and Silver Necklace and Bracelet
By Hermès
Located in New York, NY
Hermes wide linked chain necklace and bracelet in 18K gold and sterling silver. The two connect for the option of a longer chain. Maker mark, gold mark, and Hermes-Paris. 15 in, and ...
Category

Free Shipping
Hermes / Georges Lenfant 18 Carat Gold Chaine D’Ancre Vendome Bracelet
By Hermès
Located in Mayfair, GB
The Hermès Chaine d’ancre Vendôme, manufactured for the Parisian jewellers by revered goldsmith, Georges Lenfant, is without a doubt one of the most recognised jewellery designs of a...
Category

1960s Hermes Chain D'Ancre Gold Bracelet
By Hermès
Located in New York, NY
This rare unisex Hermes bracelet is crafted in 18k yellow gold and was designed by George L'enfant for the classic Chain d'Ancre collection. Made in France circa 1960s. Measurements:...
Category

Free Shipping
Hermes Diamond Gold Bracelet
By Hermès
Located in Feasterville, PA
This exquisite Diamond White Gold Bracelet by the French jewelry icon Hermes is yet another example of the superb craftsmanship they’re known for. This is an extremely rare item that...
Category

Surely you’ll find the exact hermes gold chain bracelet you’re seeking on 1stDibs — we’ve got a vast assortment for sale. Every item for sale was constructed with extraordinary care, often using Gold, 18k Gold and Yellow Gold. Our collection of these items for sale includes 32 vintage editions and 18 modern creations to choose from as well. Finding the perfect hermes gold chain bracelet may mean sifting through those created during different time periods — you can find an early version that dates to the 20th Century and a newer variation that were made as recently as the 21st Century. As it relates to this specific piece, our collection includes designs that are universally popular, but carat weights, specifically, are sought with frequency. A hermes gold chain bracelet can be a stylish choice for most occasions, but Diamond rings, from our inventory of 6, can add a particularly distinctive touch to your look, day or night. Today, if you’re looking for a round cut version of this piece and are unable to find the perfect match, our selection also includes alternatives. There aren’t many items for men if you’re seeking a hermes gold chain bracelet, as most of the options available are for women and unisex.

How Much is a Hermes Gold Chain Bracelet?

Prices for a hermes gold chain bracelet can differ depending upon size, time period and other attributes — at 1stDibs, these accessories begin at $450 and can go as high as $42,903, while this accessory, on average, fetches $12,500.

Finding the Right Bracelets for You

Today, antique and vintage bracelets are versatile and universally loved accessories that can add polish and pizzazz to any ensemble.

Bracelets were among the jewels discovered to have been buried with Pharaoh Tutankhamun when his tomb was unearthed in 1922, and wrist and arm bracelets were allegedly worn by Queen Puabi in Sumer, southern Mesopotamia. But preceding the adornments of Ancient Egypt and elsewhere, the people of prehistoric times likely wore the decorative accessory, fashioning it from shells and fish bones. When the Bronze Age allowed for more durable materials and semiprecious stones to be incorporated into jewelry, bracelets became a treasured symbol of wealth.

In the thousands of years following the debut of the world’s first bracelets, the artistry behind this common accessory has only broadened, with designers at popular jewelry houses growing more venturesome over time. David Webb looked to nature for his Animal Kingdom bracelets, and for her best-selling bracelets and more at Tiffany & Co., Elsa Peretti would frequently do the same. From bangles to tennis bracelets, the modern age offers plenty of options.

Internationally acclaimed bracelet designs have on occasion become powerful symbols of status, style and, in the case of Cartier's iconic design, love. The Cartier Love bracelet can be found on the wish list of most jewelry lovers and on the wrist of some of the world’s biggest stars. Its arrangement of mock screwheads and distinctive functionality — it was initially locked and unlocked with an accompanying vermeil screwdriver — is an enduring expression of loyalty, unity and romance. (Do you know how to spot a fake Cartier Love bracelet?)

While the Love bracelet has played a role in the skyrocketing popularity of cuff-style bracelets, they are far from the only glamorous option for collectors. Make a statement with an Art Deco design, a style that sees all kinds of iterations fitted with studded cuffs, one-of-a-kind shapes and dazzling insets. A chunky vintage gold bracelet in the Retro style will prove eye-catching and elevate any outfit.

One of the best things about bracelets, however, is that you never have to choose just one. Style icon Jacqueline Kennedy stacked her Croisillon bracelets — designed by Jean Schlumberger for Tiffany & Co. — with such frequency that the ornate bangles were eventually dubbed “Jackie bracelets” by reporters. Contemporary silver pieces can easily complement each other, rendering a layering of luxury almost a necessity.

Find a diverse collection of bracelets that you can sort by style, stone cut and more on 1stDibs.