H 27.5 in. Dm 27.5 in.
Sunburst Gilt Roses and Crystal Flowers Illuminated Mirror by Palwa, Germany
By Palwa
Located in Antwerp, BE
Beautiful brass illuminated mirror Made by Palwa, Germany with original label. The large individual flower has jewel-like faceted crystals set in a brass circle enclosing the mirror ...
Category

H 3.94 in. Dm 27.17 in.
Sunburst Mirror Illuminated, with Swarovski Crystals, Austria, 1970s
By Christoph Palme, Palwa, Ernest Palme
Located in Bronx, NY
Sunburst mirror surrounded by a gold gilded frame that has numerous cut crystals in various sizes by Swarovski crystals Austria, it lights up the room like a fireplace it is the cent...
Category

H 2.76 in. Dm 14.97 in.
Pair of Large Illuminated Mirrors
By Stilnovo
Located in London, GB
Pair of large illuminated mirrors with brushed brass pierced fretwork frame. The mirror is held in place by metal clips which are easily removable to change the lighting element bene...
Category 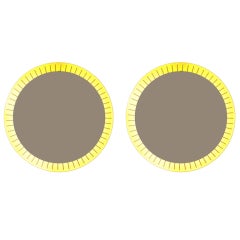 H 3.94 in. Dm 27.17 in. L 3.94 in.
Large Illuminated Midcentury Sunburst Wall Mirror Made of Gold-Plated Wood
Located in München, DE
Very rare large illuminated sunburst wall mirror made of wood, made in Italy. Diameter is 60cm / 23.6". There are two frames, one on the top of the other one, in between there are...
Category

H 5 in. Dm 23.5 in.
Round Illuminated Rupert Nikoll Lucite Flower Mirror, Vienna, Austria
By Rupert Nikoll, Emil Stejnar
Located in bergen op zoom, NL
Designed by Emil Stejnar and manufactured by Rupert Nikoll for the Vienna Cafe Ohne Pause Espresso at Graben Austria, 1955. This mirror is eye candy to look at during daytime and ...
Category

H 3.55 in. Dm 22.45 in.
Jean Royère Style Illuminated Wall Mirror Patinated Brass Red Enameled
By Jean Royère
Located in Nierstein am Rhein, DE
A round backlit "undulation" wall mirror in the style of Jean Royère, made in France, circa 1940-1950. It has a round patinated tubular brass frame within a red enameled wavy line, p...
Category

How Much is a Illuminated Sunburst Mirror?

The average selling price for an illuminated sunburst mirror at 1stDibs is $2,628, while they’re typically $887 on the low end and $14,900 for the highest priced.

5 Standout Contemporary Mirrors (and How to Decorate with Them)

Leading talents tell us what goes into their mirrored creations and where to put them on a wall.

These are the fairest of them all.