H 9.65 in. W 13.98 in. D 0.04 in.
Abstract Composition - Original Screen Print by Luigi Montanarini - 1970s
By Luigi Montanarini
Located in Roma, IT
Geometries is a beautiful original screen print, realized by the Italian artist Luigi Montanarini (1906-1998), published by La Nuova Foglio, a publishing house of Macerata, Italy, as...
Category 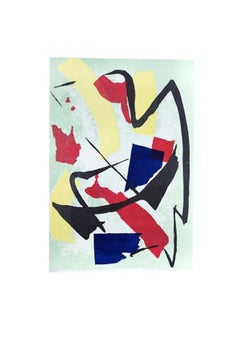 Luigi Montanarini On Sale For Sale on 1stDibs

On 1stDibs, you can find the most appropriate luigi montanarini on sale for your needs in our varied inventory. There are many Contemporary and Abstract versions of these works for sale. When looking for the right luigi montanarini on sale for your space, you can search on 1stDibs by color — popular works were created in bold and neutral palettes with elements of gray, beige, purple and silver. Artworks like these — often created in screen print, lithograph and paint — can elevate any room of your home. A large luigi montanarini on sale can be an attractive addition to some spaces, while smaller examples are available — approximately spanning 9.65 high and 9.3 wide — and may be better suited to a more modest living area.

How Much is a Luigi Montanarini On Sale?

The average selling price for a luigi montanarini on sale we offer is $261, while they’re typically $261 on the low end and $1,471 for the highest priced.

Luigi Montanarini’s artistic career started a little by chance when, in 1925, during one of his frequent visits to the Uffizi, he met the painter Maurice Denis and in the same year he made his first stay in France. In 1927, Montanarini attended the Academy of Fine Arts in Florence and began the artistic and emotional bond with Felice Carena, his teacher of painting. He immediately showed great passion and love for the classics and the masters of the 19th century, from Courbet to Paul Cézanne and Pierre-Auguste Renoir. After graduating from the academy, Montanarini made his second trip to Europe. He visited the Netherlands twice and renewed his interest in Rubens, Van Gogh and Rembrandt. Later, he visited Zurich and returned to Paris, where he met Gino Severini and attended Alberto Magnelli, Picasso and had fertile intellectual exchanges with Jacques Villon and Alfred Manessier. Montanarini adheres to the Roman School (Novecento) together with which he exhibits at the La Cometa Gallery in Rome. The following year, at the end of the war, he founded together with Pericle Fazzini, Enrico Prampolini, Joseph Jarema and Virgilio Guzzi, the Art Club based in Via Margutta. Montanarini met and attended Lionello Venturi, returned to Italy after the exile of the Fascist period. The year 1956 marks the beginning of its informal period and in 1965, Montanarini became director of the Academy of Fine Arts in Rome and a member of UNESCO, which he held until 1976.