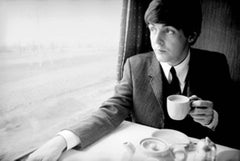 Paul McCartney
By Jack Robinson
Located in Memphis, TN
The Beatles announced the formation of their record label, Apple Records, at a press conference at the Americana Hotel in New York in May, 1968. This photograph of Paul McCartney is ...
Category

H 16 in. W 20 in.
Paul McCartney Authentic Strand of Hair
Located in Jersey, GB
Sir Paul McCartney started his musical career in The Beatles and remains a hugely influential and talented performer with a huge global fanbase. One of the world's greatest living ic...
Category 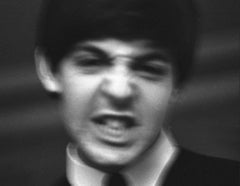 H 11 in. W 14 in.
'Paul McCartney Pinstripe' SIGNED, LIMITED EDITION
By Gered Mankowitz
Located in London, GB
Paul McCartney Decca Studios London 1967 by Gered Mankowitz Silver gelatin print - signed and numbered and stamped on the face of the print in the border below the image. LARGE 30 ...
Category

H 20 in. W 24 in.
Paul McCartney, The Beatles, Rome, 1989
By Guido Harari
Located in New York, NY
11x16” Limited Edition of 50 Signed by the Photographer Next available edition printed upon purchase. Other sizes available. Please allow 4 weeks for production.
Category

Lord Christopher Thynne
The Beatles, Paul McCartney on a train at Marylebone Station, 1964/2021

H 24.02 in. W 19.89 in.
The Beatles, Paul McCartney with a cab at Marylebone Station
Located in London, GB
Original silver gelatin print on Ilford Multigrade fibre base 255 gsm paper, numbered in black pen to verso from the edition of 35, artist’s name blindstamp lower right, publisher’s ...
Category

Lord Christopher Thynne
The Beatles, Paul McCartney with a cab at Marylebone Station, 1964/2021

H 24.02 in. W 19.89 in.
The Beatles, Paul McCartney on a train at Marylebone Station
Located in London, GB
Original silver gelatin print on Ilford Multigrade fibre base 255 gsm paper, numbered in black pen to verso from the edition of 35, artist’s name blindstamp lower right, publisher’s ...
Category

Lord Christopher Thynne
The Beatles, Paul McCartney on a train at Marylebone Station, 1964/2021

Paul McCartney- figurative black and white portrait on matchbox
By Matchbox Artists
Located in New York, NY
In recent years, MB has also created a unique gallery - drawing black and white pencil portraits of iconic celebrities on matchbooks, while using the actual matches in the display. B...
Category

H 14 in. W 11 in. D 0.1 in.
Paul & Linda McCartney, Cover of Life Magazine, 1971
By Henry Diltz
Located in New York, NY
Limited Edition Signed, Titled, and Numbered by Henry Diltz "Henry was friends with fellow photographer Linda Eastman… one day she married Paul McCartney. She called him in 1971 t...
Category

Paul McCartney and his Camera, 1964

H 24 in. W 20 in.
Paul McCartney Being Interviewed Fine Art Print
Located in Las Vegas, NV
This black and white action shot features Paul McCartney candid while being interviewed, looking down as he speaks into a microphone while in Hamburg. Paul McCartney is an English s...
Category

Paul Mccartney For Sale on 1stDibs

Find the exact paul mccartney you’re shopping for in the variety available on 1stDibs. You can easily find an example made in the Modern style, while we also have 7 Modern versions to choose from as well. Finding the perfect paul mccartney may mean sifting through those created during different time periods — you can find an early version that dates to the 20th Century and a newer variation that were made as recently as the 21st Century. When looking for the right paul mccartney for your space, you can search on 1stDibs by color — popular works were created in bold and neutral palettes with elements of black, gray, brown and silver. A paul mccartney from Curt Gunther, Terry O'Neill, Emilio Lari, Gered Mankowitz and Harry Benson — each of whom created distinctive versions of this kind of work — is worth considering. Frequently made by artists working in archival pigment print, pigment print and silver gelatin print, these artworks are unique and have attracted attention over the years.

How Much is a Paul Mccartney?

The price for an artwork of this kind can differ depending upon size, time period and other attributes — a paul mccartney in our inventory may begin at $250 and can go as high as $8,400, while the average can fetch as much as $1,200.