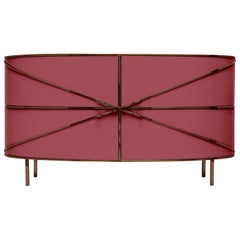 H 32.29 in. W 86.62 in. D 21.66 in.
Contemporary Splatter Sideboard by Railis Design, Black, Gold, Pink
By Railis Kotlevs
Located in Husavik, IS
Worthy of its own award show! A modern mixture of function and style, the Splatter media console features clean lines, a uniquely mixed media finish, and plenty of media space. The S...
Category

H 31.89 in. W 70.87 in. D 17.72 in.
1930s Amazing Art Deco Wood and Pink Mirror Italian Sideboard
Located in Aci Castello, IT
Italian Art Deco sideboard made in Como Northern Italy in the 1920s, three kind of wood, mahogany, maple and black painted wood, pink glass mirror in the sides, black glass on the to...
Category

H 31.11 in. W 76.78 in. D 21.66 in.
Bauhaus Buffet Sideboard Berlin in Natural Walnut, Polished Brass, Rose Pink
By DOOQ
Located in Lisbon, PT
Like its name suggests, Berlin sideboard is inspired by Bauhaus, a wave of thought that is impossible to overlook when passing through the streets of Berlin. In a more down to earth ...
Category

H 32.68 in. W 70.87 in. D 23.63 in.
Pink Sideboard in Brass and Colorful Lacquered Wood, Geometric-Shaped
By Matì
Located in Tradate, IT
Eunduetrè is a low storage system which punctuates the space and plays with contrasting effects. Extremely simple in its geometric shapes, this sideboard/credenza alternates colorful...
Category

H 25.6 in. W 76.78 in. D 21.66 in.
Wood and Pink Mirror Sideboard, 1940s
Located in Bresso, Lombardy
This sideboard is made from wood, with lacquered wood doors, a pink mirror top, brass and perspex handles and maple interiors.
Category

H 32 in. W 84 in. D 17.75 in.
Contemporary Valentina Giovando Sideboard Wood Brass Fabric Gold Pink
By Valentina Giovando
Located in Milano, IT
PARADISEA Pink and fuchsia sequins take the form of the beautiful Birds of Paradise's feathers, the main inspiration for Paradisea sideboard. Precious fabric covers the top of the s...
Category

H 35.04 in. W 48.43 in. D 24.02 in.
Huge Art Deco wood and pink mirror Italian Sideboard 1920
Located in Aci Castello, IT
Italian sideboard made in Como in the 1920, three kind of wood, mahogany, maple and black painted wood, pink glass mirror in the sides and black glass on the top.
Category

H 30 in. W 69.5 in. L 30 in.
Black High Gloss Sideboard with Pink Details from Late 80's/Early 90's
Located in Steenwijk, NL
We thought "MIAMI". A fun piece from the late 80's or early 90's. The glossy black Finnish combined with the matted pink drawers and top are a good combination. A playful piece that...
Category

H 26.38 in. W 70.87 in. D 24.41 in.
Stunning Glossy Coral Lacquered Sideboard
By Milo Baughman, Tommi Parzinger
Located in Houston, TX
Charming sideboard finished in an ultra-smooth and glossy coral pink lacquer. Cabinet doors in the left and right and a center drop down door all open to reveal a single shelf. Three...
Category

H 31 in. W 64 in. D 19 in.
Stunning Modern Custom Sideboard / Cabinet with a Pink Tropical Flamingos
Located in Houston, TX
Stylish custom made credenza or sideboard. It has sublimated, tropical flamingo print that is divided between the panels and is in a Classic pink color.
Category

H 33.75 in. W 59 in. D 13.88 in.
U-452 Pink and White Sideboard by Jiri Jiroutek
By Jiri Jiroutek, Interiér Praha
Located in Brno, CZ
The U-452 midcentury sideboard with pink and white sliding doors, was designed by the Czech furniture designer Jiri Jiroutek, and is part of the popular U collection manufactured by ...
Category

U-452 Pink and White Sideboard by Jiri Jiroutek

H 29.93 in. W 43.31 in. D 17.72 in.
Vintage Chinese Painted Buffet Credenza Sideboard in Pink Black, circa 1940
Located in Houston, TX
A vintage Chinese painted four-door buffet in pink and black, circa 1940. The beautiful painted finish on this Chinese buffet combines both black and pink along with faded remnants o...
Category

H 34 in. W 63.75 in. D 18 in.
Get Updated with New Arrivals
Follow "Pink Sideboard", and we’ll notify you when there are new listings in this category.

Pink Sideboard For Sale on 1stDibs

Choose from an assortment of styles, material and more with respect to the pink sideboard you’re looking for at 1stDibs. Each pink sideboard for sale was constructed with extraordinary care, often using wood, metal and brass. Find 16 options for an antique or vintage pink sideboard now, or shop our selection of 13 modern versions for a more contemporary example of this long-cherished piece. Whether you’re looking for an older or newer pink sideboard, there are earlier versions available from the 18th Century and newer variations made as recently as the 21st Century. A pink sideboard is a generally popular piece of furniture, but those created in Modern, Mid-Century Modern and Art Deco styles are sought with frequency. Many designers have produced at least one well-made pink sideboard over the years, but those crafted by Scarlet Splendour, Nika Zupanc and A.H. McIntosh Furniture are often thought to be among the most beautiful.

How Much is a Pink Sideboard?

Finding the Right Sideboards for You