H 42.92 in. W 17.72 in. D 19.69 in.
1980s Vintage Postmodern Chairs in Upholstery with Brass, a Pair
By Milo Baughman
Located in Chicago, IL
what’s important. Redo in your favorite fabric. I’ve never seen chairs like this before. Dimensions
Category

1980s Vintage Postmodern Chairs in Upholstery with Brass, a Pair

1980s Postmodern Chairs in the Style of Vladimir Kagan, a Pair

H 31 in. W 30 in. D 28 in.
4 Postmodern Cidue Chairs
By Cidue
Located in Denver, CO
Set of 4 Postmodern chairs with pop of purple and metallic by Cidue, Italy, circa 1980s.
Category

H 41.34 in. W 22.84 in. D 17.33 in.
Pair of Robert Venturi Chippendale Chairs for Knoll
By Robert Venturi
Located in Birmingham, AL
A pair of Postmodern chairs by Robert Venturi in black laminate and plywood with original red wool
Category

Pair of Postmodern Chairs in Cream Leather Bottega Side Chair by Frag, Italy

H 36.5 in. W 22 in. D 22 in.
1980s Postmodern Sculptural Chairs in the Style of Jaymar, a Pair
By Jaymar
Located in Chicago, IL
Super cool and comfortable postmodern chairs. Great angles, they look good from all directions. The
Category

1980s Postmodern Sculptural Chairs in the Style of Jaymar, a Pair

H 36.5 in. W 21.5 in. D 36.5 in.
Chairs in Blue Fabric & Metal Frame, 1980s
Located in Antwerp, BE
chair; Mid-Century Modern; Industrial; Minimalist; Postmodern; Chairs with blue upholstery and a
Category

H 34.26 in. W 20.08 in. D 22.45 in.
Black Oak and Leather Arco Dining Chairs
Located in Antwerp, BE
Postmodern chair by Arco, The Netherlands, ebonized oak and saddle leather chairs, the 1980s
Category

H 29 in. W 26 in. D 32 in.
Highback Pair of Postmodern Lounge Chairs
Located in Las Vegas, NV
Lines line lines. These gorgeous chair are begging to be modernized. The boned are great but the
Category

H 43 in. W 30 in. D 30 in.
Postmodern-Inspired Accent Chair and Sculpture, Behsheen Chair
By Kouros Maghsoudi
Located in New York, NY
Chair invites you to literally get down with your guests. The Behsheen Chair comes with or without the
Category

H 32 in. W 18 in. D 20 in.
Robert Whitton Prototype Postmodern 1980’s Chair
By Robert Whitton
Located in Phoenix, AZ
Robert Whitton one off aluminum chair circa late 1980's. This architectural example has been newly
Category

H 32.29 in. W 22.45 in. D 30.71 in.
Postmodern-Inspired Accent Chair and Sculpture, Behsheen Chair with Hole
By Kouros Maghsoudi
Located in New York, NY
Chair invites you to literally get down with your guests. The Behsheen Chair comes with or without the
Category

H 32 in. W 18 in. D 20 in.
Pair of Postmodern High Back Italian Chairs
Located in Surbiton, GB
Pair of late 20th Century Italian high back chairs with black lacquered wooden frames and off white
Category

H 31 in. Dm 24 in.
1980s Postmodern Arc Chairs, a Pair
By Vladimir Kagan
Located in Chicago, IL
Beautiful chairs in excellent condition. These would be lovely in a living room or bedroom. Chairs
Category

H 31 in. W 30 in. D 30 in.
Sottsass Inspired Memphis Milano Chair, Italian Design, Postmodern
By Ettore Sottsass
Located in Antwerp, BE
Postmodern Memphis style chair, Italy, the 1970's. As a typical characteristic of Memphis, The
Category

H 34.06 in. W 17.92 in. D 13.78 in.
1980s Sculptural Postmodern Distressed Leather Chair
By Jaymar
Located in Chicago, IL
Stunning, sculptural, and comfortable. Still not sure if I want to sell this:) No labels but in the style of Jaymar. The leather is gorgeous but has markings as shown. Perhaps a g...
Category

H 31.5 in. Dm 38.5 in.
Vintage Postmodern Triangle Back Dining Chairs, Set of 4
Located in west palm beach, FL
A fabulous set of 4 vintage Postmodern dining chairs. A chic triangle band back design in a
Category

H 34 in. W 37 in. D 31 in.
Boucle Postmodern Tubular Lounge Chairs, 1970
Located in Chicago, IL
Boucle Post Modern tubular lounge chairs, 1970. The seat cantilevers out from the back floating
Category

H 42 in. W 23 in. D 19 in.
Get Updated with New Arrivals
Save "Postmodern Chair", and we’ll notify you when there are new listings in this category.

Postmodern Chair For Sale on 1stDibs

How Much is a Postmodern Chair? 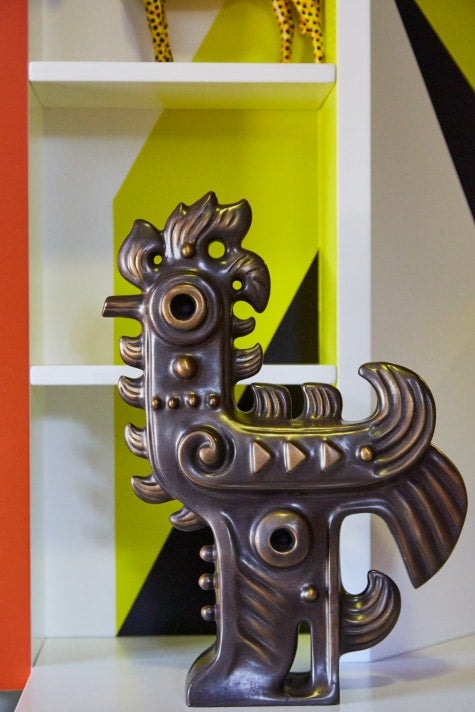