H 19.25 in. Dm 39 in.
Round Mid-Century American Cocktail Table
Located in Pompano Beach, FL
Round walnut cocktail table with a glass top.
Category

H 19.25 in. Dm 36 in.
Colosseum Mix Wood Round Glass Top Coffee Table/Cocktail Table by Po Shun Leong
By Po Shun Leong
Located in Beverly Hills, CA
The Ark collection by Po Shun Leung originated from his dreaming of ocean liners. When the sirens screamed in London during the II World War, the Leung family headed underground for...
Category

H 16 in. W 36 in. D 60 in.
Colosseum Mix Wood Round Glass Top Coffee Table/Cocktail Table by Po Shun Leong
By Po Shun Leong
Located in Beverly Hills, CA
The Ark collection by Po Shun Leung originated from his dreaming of ocean liners. When the sirens screamed in London during the II World War, the Leung family headed underground f...
Category

Wood and Metal Round Coffee Table

H 14.18 in. Dm 33.47 in.
William Earle "Barrens" Cocktail table, round, 40"
By William Earle
Located in Columbia, SC
A round cocktail table with three elliptical cut-outs creating three "legs", which may remind the viewer of an elegant tree stump. The Barrens also comfortably doubles as seating. ...
Category

H 15 in. W 40 in. D 40 in.
Mid-Century Modern Round Mahogany Wood Marquetry Side or Cocktail Table, Italy
Located in Miami, FL
Stylish 1970s Italian side or cocktail table in mahogany wood, decorated with marquetry on the top. Unique pedestal base made in Italy.
Category

H 26.5 in. W 23 in. D 21 in.
Walnut Wood Round Side Table
By Ambrogio Tagliabue
Located in Milan, IT
This charming piece boasts exquisite craftsmanship and a fine walnut wood structure and will be an ideal addition to a classic living room or bed room. Its sizes make it very versati...
Category 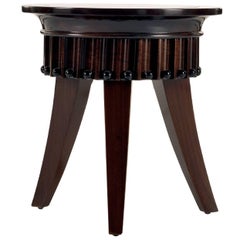 Walnut Wood Round Side Table

H 18.9 in. Dm 17.72 in.
Round Leather Cocktail Ottoman
Located in Port Chester, NY
A modern leather upholstered round ottoman with a starburst channeled seat, centered by a removable dish top tray with textured vintage metal handles on an oak bae with square tapere...
Category

H 20 in. W 45.25 in. D 45.25 in.
Drop Coffee Table Round Table, Wood Legs White Lacquered
Located in Brooklyn, NY
The drop coffee table accents your design with a sleek and playful shape. Keep it traditionally white or perhaps spice it up with a shot of colored lacquer to draw attention and bala...
Category

H 20.13 in. Dm 24.5 in.
Andrianna Shamaris Round Bleached Teak Wood Coffee Table
By Andrianna Shamaris
Located in New York, NY
Organic reclaimed round teak coffee table, bleached with a light white washed finish. Perfect for inside or outside living. We can also produce this shape charred or natural teak. ...
Category

H 15 in. Dm 31.5 in.
Andrianna Shamaris Round Bleached Teak Wood Coffee Table
By Andrianna Shamaris
Located in New York, NY
Organic round reclaimed bleached teak coffee table. Perfect for inside or outside living. We can also produce this shape charred or natural teak. The St. Barts Collection features a...
Category

H 18 in. Dm 38 in.
Custom Reclaimed Wood Rustic Chunky Round Coffee Table
By Dos Gallos Studio
Located in Los Angeles, CA
Custom rustic modern coffee table with 3.5 inch thick top. The leg thickness will depend off the wood that we have available. Custom finishes available. Made in Los Angeles by Dos G...
Category

H 15 in. Dm 44.5 in.
Round Wood and Glass Coffee Table with Shelf
By Johnny Poux
Located in kingston, NY
Revolution table A machine pared down to its most simple parts, this coffee table with its five circular elements gracefully rotates. It features lathe-turned wooden wheels with l...
Category

Round Wood and Glass Coffee Table with Shelf

H 17.8 in. Dm 43.8 in.
Jan Vlug Large Cocktail Table with Round Marble Top
By Jan Vlug
Located in Waalwijk, NL
Jan Vlug, cocktail table, wood, marble, travertine and brass, Belgium, 1970s. Exclusive coffee table with characteristic graphical base and round stone top. The base, made of dark l...
Category

Round Michael Taylor for Baker Coffee and Cocktail Table

Halabala Style Round Side Table in Dark Wood

H 22 in. W 28.75 in. D 28.75 in.
Andrianna Shamaris Round Bleached Teak Wood Organic Coffee Table
By Andrianna Shamaris
Located in New York, NY
Impressive over sized single root organic round teak wood coffee table. The reclaimed teak is bleached and left to bake in the sun and sea salt air for over a year to achieve this un...
Category

H 16.5 in. Dm 57 in.
Jan Vlug Large Cocktail Table with Round Marble Top
By Jan Vlug
Located in Waalwijk, NL
Jan Vlug, cocktail table, wood, marble, travertine and brass, Belgium, 1970s. Exclusive coffee table with characteristic graphical base and round stone top. The base, made of dark l...
Category

H 17 in. Dm 39 in.
Jay Spectre Round Reeded Wood Coffee Table
By Jay Spectre
Located in Chicago, IL
Designed by Spectre for Century Furniture, with a limed finish base. Part of Spectre's collection designed for Bloomingdale's centennial. A total of two available. Measure: A ver...
Category

Full Wood Round or Square Table or Coffee Table

H 14.5 in. Dm 38 in.
Round Birch Wood Coffee Table, United States, 1980s
Located in New York, NY
United States 1980s round birch wood coffee table. This coffee table has two tiers. The thick top tier is a solid round block of wood. It is simple and elegant in design.
Category

H 17 in. Dm 48 in.
Art Deco Wood & Glass Round Coffee Side Table, Italy, 1940s
Located in Rome, IT
Round coffee side table featuring four hand-carved curved legs of a lighter wood on a dark wood base. The glass top is decorated with a frosted glass jockey on his horse and is frame...
Category

H 18 in. Dm 33 in.
Round Solid Sculptural Caviuna Wood Coffee Table by Giuseppe Scapinelli
By Giuseppe Scapinelli
Located in Hollywood, CA
A round solid Caviuna coffee table with sculptural legs and an inset glass top designed by Brazil's Giuseppi Scapinelli. The finish is a durable water-resistent oil finish that feels...
Category

H 16 in. Dm 36 in.
Petrified Wood Round Coffee Table Black Gloss and Nickel Base
Located in Paris, FR
Round coffee table petrified wood with high gloss black paint and polished nickel base. Petrified wood has turned into stone. Trees have been buried for many years under sedimen...
Category

Petrified Wood Round Coffee Table Black Gloss and Nickel Base

H 18 in. W 39 in. D 39 in.
Opal Kleinmöbel Midcentury Resin and Wood German Round Coffee Table, 1960s
By Opal Kleinmöbel 1
Located in Roma, IT
Round table by Opal Kleinmöbel. Danish vintage. A Classic design German item from the 1960s. All legs are removable, making this very special table easy to move or store. The ...
Category

H 22.84 in. Dm 31.89 in.
Midcentury Italian Round Coffee/Side Table in Wood and Brass, 1960s
Located in Los Angeles, CA
Italian-made coffee table produced in the 1960s. Round top in veneered wood. Metal base with spider-shaped legs in brass. Original patina.
Category

Midcentury Italian Round Coffee/Side Table in Wood and Brass, 1960s

H 19 in. Dm 36 in.
Round Coffee Table
By Gio Ponti
Located in Meyrin, CH
Round coffee table.
Category

H 18 in. Dm 27 in.
Contemporary Three Legged Round Occasional Table in Solid Wood by Kate Duncan
By Kate Duncan
Located in Toronto, Ontario
The tapered leg and beveled top give our Nicole table a distinct lightness, and rather than using a bulky skirt that wraps around the perimeter of the table, the legs come together i...
Category

H 16 in. Dm 36 in.
Amura 'Dogon' Round Side Table in Marble and Wood by Amura Lab
By Amura
Located in GRUMO APPULA (BA), IT
Structure: Solid wood; top: Marble and wood; frame: natural and dark oak, canaletto walnut, and lacquered beech in the RAL colors in collection.
Category

Round Wood Cocktail Table For Sale on 1stDibs

How Much is a Round Wood Cocktail Table?

A round wood cocktail table can differ in price owing to various characteristics — the average selling price 1stDibs is $3,348, while the lowest priced sells for $366 and the highest can go for as much as $40,000.