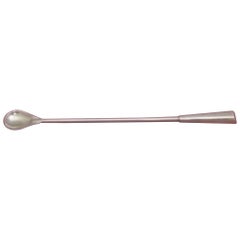 H 1 in. W 1 in. D 1 in.
Vine by Tiffany & Co. Sterling Silver Demitasse Spoon
By Tiffany & Co.
Located in Big Bend, WI
Sterling silver demitasse spoon, 4" in the pattern vine by Tiffany and Co. It is monogrammed (monos vary) and is in excellent condition. Satisfaction guaranteed!
Category

H 1 in. W 1 in. D 1 in.
Palm by Tiffany & Co. Sterling Silver Demitasse Spoon
By Tiffany & Co.
Located in Big Bend, WI
Sterling silver demitasse spoon 4 1/8" in the pattern Palm by Tiffany. It is monogrammed (monos vary) and is in excellent condition. Satisfaction guaranteed!
Category

How Much is a Silver Tiffany Spoon?

Prices for a silver tiffany spoon can differ depending upon size, time period and other attributes — at 1stDibs, they begin at $39 and can go as high as $9,500, while the average can fetch as much as $159.