Free Shipping
Tiffany & Co. Silver Charm Necklace and Bag
By Tiffany & Co.
Located in Chipping Campden, GB
The Tiffany heart charm on a chunky silver chain is the ultimate timeless classic! They never go out of fashion and are an essential to any collection! Comes with bag. Length: 40cm ...
Category 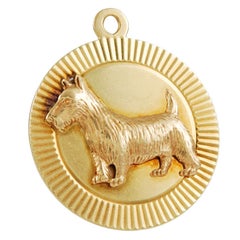 Free Shipping
1920s Tiffany & Co. Art Deco Gems and Platinum Charm Bracelet
By Tiffany & Co.
Located in Beverly Hills, CA
Art Deco bracelet with twelve cute charms created by Tiffany & Co. in the 1920s. The bracelet and the charms are made of platinum. Each charm carries a Tiffany maker's mark and the b...
Category

Free Shipping
W 1.25 in. L 1.33 in.
TIFFANY & CO. Monkey Charm / Pendant
By Tiffany & Co.
Located in New York, NY
Large round 14K gold pendant with adorable applied climbing monkey, made and signed by Tiffany&Co. Perfect for engraving your special message on the back. Alice Kwartler has sold t...
Category

Free Shipping
Dm 1.13 in.
TIFFANY & CO. Pendant/Charm with Watch
By Tiffany & Co.
Located in New York, NY
A great pendant/charm. A beautiful engine-turned heart with a secret. It swings open to reveal a heart-shaped mechanical watch. Fashionable, practical and so much fun to wear. ...

W .75 in. L .75 in.
Tiffany & Co. Gold Gemset Christmas Charm
By Tiffany & Co.
Located in New York, NY
Most superlative Christmas charm/pendant. Made and signed by TIFFANY & CO. Large square shape, with intersecting cut-out letters that spell out "NOEL" in the shape of a cross. The...
Category

Free Shipping
Dm 1.25 in.
Tiffany & Co. Large Gold "You Are My Queen" Charm
By Tiffany & Co.
Located in New York, NY
Large charm in 14k yellow gold. Made and signed by Tiffany & Co. Sending the message, " You are My Queen", with an applied crown, surrounded by rubies, sapphires, and a diamond. 1...
Category

Tiffany & Co. Large Gold "You Are My Queen" Charm

Free Shipping
Dm 1.50 in.
Tiffany & Co. Sterling and Enamel Charm Bracelet
By Tiffany & Co.
Located in New York, NY
Sterling silver charm bracelet with six charms. Made and signed by TIFFANY &amp; CO. Five of the iconic charms are enameled. 7 1/2&quot; long. This is an older bracelet, made in ...
Category

W 0.4 in. L 0.99 in.
Tiffany & Co. Gold Gemset Christmas Charm
By Tiffany & Co.
Located in New York, NY
Most superlative Christmas charm/pendant. Made and signed by TIFFANY & CO. Large square shape, with intersecting cut-out letters that spell out "NOEL" in the shape of a cross. The...
Category

Free Shipping
W 1.25 in. L 1.33 in.
Tiffany & Co. Gold "Emergency Money" Charm
By Tiffany & Co.
Located in New York, NY
14K gold charm, which has two glass ends. Engraved on the side is &quot;In Emergency Break Glass.&quot; The charm contains a folded-up one dollar bill. Made and signed by TIFFANY ...
Category

Tiffany And Co Charms For Sale on 1stDibs

Find an expansive variety of tiffany and co charms available on 1stDibs. All of the items for sale were constructed with extraordinary care, often using Gold, 14k Gold and 18k Gold. Find a collection of 19 vintage versions or 1 modern creations for a more contemporary example of these cherished accessories. Our inventory is broad and distinctive, with accessories on offer that were made as long ago as the 20th Century to those produced as recently as the 21st Century. Our collection of tiffany and co charms includes designs that are universally popular, but Contemporary and Modern styles, specifically, are sought with frequency. Lovers of these pieces agree that it’s a versatile accessory, but a selection from our variety of 6 Ruby versions can add an especially stylish touch. A selection of brilliant cut can be found today on these pages. Most of our tiffany and co charms for sale are for women, but there are 3 pieces available to browse for men.

How Much are Tiffany And Co Charms?