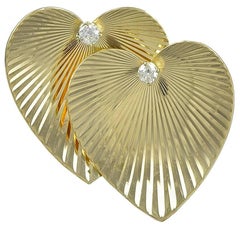 Free Shipping
W .82 in. L 1.32 in.
Tiffany & Co. Gold and Diamond Oval Cufflinks
By Tiffany & Co.
Located in Darnestown, MD
Tiffany oval cufflinks that are nicely tailored with a touch of bling. They are 3/4" x 5/8" in measurement. The tight open weave gold background has a diagonal line of diamonds acros...
Category

Free Shipping
Tiffany & Co Pearl and Diamond Fireworks Brooch
By Tiffany & Co.
Located in Bishop's Stortford, Hertfordshire
This 1994 Brooch by Tiffany & Co. features a pearl and diamond firework design, made in platinum and featuring round cut diamonds totalling 3.0-3.5 carats around a central pearl of 1...
Category

Free Shipping
H 1.13 in. W 1 in.
Tiffany & Co. Gold and Diamond Oval Cufflinks
By Tiffany & Co.
Located in Darnestown, MD
Tiffany oval cufflinks that are nicely tailored with a touch of bling. They are 3/4" x 5/8" in measurement. The tight open weave gold background has a diagonal line of diamonds acros...
Category

Free Shipping
H .63 in. W .75 in.
Tiffany & Co. Gold and Diamond Flame Earrings
By Tiffany & Co.
Located in Darnestown, MD
Tiffany 18 karat gold earrings in the shape of branches or flames. The bottom of each has three graduated diamonds with a total carat weigh of .40 carats per earring. Clip backs can ...
Category

Free Shipping
W .75 in. L 1.25 in.
Tiffany & Co. Soleste Tanzanite and Diamond Ring
By Tiffany & Co.
Located in Darnestown, MD
`Graceful and elegant tanzanite and diamond ring by Tiffany from their Soleste Collection. The central tanzanite stone is approximately 1.5 carats. It is surrounded by 2 rows of roun...
Category

Free Shipping
TIFFANY & CO. Diamond and Tsavorite Pansy Brooch
By Tiffany & Co.
Located in Amsterdam, NL
A brooch in the shape of a pansy set with 23 brilliant cut tsavorite garnets (circa 1.1 carats) in 18 carat gold and 51 brilliant cut diamonds (circa 2.1 carats) set in platinum, the...
Category

L 17.5 in.
French Tiffany & Co. Diamond and Gold Watch
By Tiffany & Co.
Located in Palm Beach, FL
Made in France, this elegant 18K yellow gold wristwatch has a round head surrounded by a diamond bezel set with 18 brilliant cut diamonds weighing an approximate 2.15CT total of F C...
Category

Free Shipping
L 6.5 in.
Tiffany and Co Solitaire Diamond Ring Platinum Lucida
By Tiffany & Co.
Located in East Brunswick, NJ
Tiffany Lucida diamond ring took decades to develop and caused a sensation when it was introduced to the world in 1999. With proud, wide corners, the mixed-cut stone makes a stunning...
Category

Free Shipping
Get Updated with New Arrivals
Save "Tiffany And Co Diamonds", and we’ll notify you when there are new listings in this category.

Tiffany And Co Diamonds For Sale on 1stDibs

Browse a vast assortment of tiffany and co diamonds for sale on 1stDibs. Frequently made of Gold, 18k Gold and Platinum, these items were constructed with great care. Find a collection of 1060 vintage versions or 529 modern creations for a more contemporary example of these cherished accessories. Our collection, which features older pieces for sale from the 18th Century and newer versions made as recently as the 21st Century, has proven very popular over the years. Modern and Contemporary are consistently popular styles when it comes to tiffany and co diamonds. Versions of these items have been a part of the life’s work for many jewelers, but those produced by Tiffany & Co., Jean Schlumberger for Tiffany & Co. and Paloma Picasso for Tiffany & Co. are consistently popular. A selection of round cut, brilliant cut and emerald cut can be found today on these pages. If you’re browsing the variety of tiffany and co diamonds for sale, you’ll find that many are available today for women, but there are still pieces to choose from for men.

How Much are Tiffany And Co Diamonds?