Marc Chagall is known for his dreamlike creations inspired by folk art, with the artist’s original prints and paintings widely influencing the fantastic imagery of Surrealism and other movements of the 20th century, as he drew on the colors and forms introduced by Cubism and Fauvism for a distinctive style all his own.

Chagall was born into an Orthodox Jewish family in Liozna, Belarus, and one of his earliest teachers was painter Yehuda Pen, who ran a school of drawing and painting in nearby Vitebsk in western Russia. In 1907, Chagall went to St. Petersburg to continue his art studies, including with painter Léon Bakst with whom he would later collaborate on set designs for the Ballets Russes.

Chagall relied on the patronage of the Jewish community to get past the restrictions on Jewish people in Russia, like Maxim Vinaver, who in 1911 supported Chagall in traveling to Paris to study. There, he found a studio in the maze of Montparnasse ateliers nicknamed “La Ruche” (“The Hive”) alongside many fellow Jewish artists from around Europe, such as Expressionist painter Chaïm Soutine and painter and sculptor Amedeo Modigliani. He also began a long friendship with abstract colorist Robert Delaunay and his wife, artist Sonia Delaunay-Terk, with Chagall bringing some of their ideas of vivid color into his subsequent work.

That first stay in Paris lasted four prolific years, with Chagall absorbing the ideas of French Impressionism and Fauvism, leading to complex and enigmatic pieces, including the 1913 Self-Portrait with Seven Fingers depicting the artist at work in his studio, a glimpse of the Eiffel Tower through the window, and the 1911 I and the Village evoking memories of his Jewish community in Belarus with the face of a goat and a man gazing at each other, enveloped by intersecting colors and shapes.

The outbreak of World War I, which unfolded when Chagall had returned to Russia for his fiancée Bella Rosenberg, cut off his return to Paris. During those years in Russia, he became extremely enthusiastic about the Russian Revolution, in particular its promise to grant full citizenship to Jewish people like him, and was named the Commissar for Art in Vitebsk, although he became disenchanted with its ideology and eventually resigned.

Chagall left the Soviet Union in 1922, living in Berlin and Paris again in 1923. The outbreak of World War II and the Nazi invasion of France compelled him to flee to the United States. (His monographs had been destroyed in Nazi book burnings and some of his works confiscated from museums and displayed as part of a “Degenerate Art” exhibition.) After the war, he returned to France, and through the rest of his life he continued to expand his practice.

Chagall had created etchings of Russian life during the 1920s but would explore printmaking later more deeply, during the 1950s, when he sought guidance from veteran lithographer Charles Sorlier, who became a friend and collaborator. Chagall’s vibrant and densely colorful prints are known around the world. There are rare single lithographs from the artist’s largest print portfolios that contain over two dozen colors. In 1960, he was commissioned to paint a new ceiling for the Opéra Garnier in Paris and stained-glass windows for the cathedrals in Metz and Reims around the same time. Chagall’s windows are celebrated today both for their narrative depth and rich swath of color, and he granted permission to his printmaking associate Sorlier to create lithographs based on his works in stained glass.

On 1stDibs, find a wide variety of Marc Chagall’s original kaleidoscopic prints, including figurative prints and landscape lithographs, and other works on paper.

Le Peintre et son Double (The Painter and his Double), 1981
By Marc Chagall
Located in Palo Alto, CA
Created in 1981, this original color lithograph on Arches wove paper is hand-signed by Marc Chagall (Vitebsk, 1887 - Saint-Paul, 1985) in pencil in the lower right margin and is numb...
Category 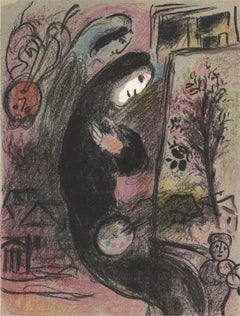 Marc Chagall
Couple Beside Tree from Chagall Lithographs I, 1960

Marc Chagall
Then the Boy displayed to the Dervish his Bosom… Arabian Nights , 1948

La grande Corbeille (The Large Basket), 1975
By Marc Chagall
Located in Palo Alto, CA
A picturesque scene captivates the viewer as memories flood back of a summer once enjoyed in such a magical place. Standing before a large basket of sumptuous fruit, a mother and chi...
Category

Marc Chagall
The Massacre of the Candidates (The Odyssey Portfolio) , 1989

The House In My Village from Chagall Lithographs I
By Marc Chagall
Located in Fort Lauderdale, FL
Lithograph
Category

Marc Chagall
The House In My Village from Chagall Lithographs I, 1960

Marc Chagall
Marc Chagall, Plate 8 from In the Land of the Gods, 1967

Dames charmante et charmante a tous egard
By Marc Chagall
Located in Fairlawn, OH
(A charming lady chatting with a lady perfect in every possible way) Signed in the plate. No pencil signed impressions are existent. Edition: 368 (including 50 imps on japan) includi...
Category

VERS LA RIVE ("LES POEMES")
By Marc Chagall
Located in Aventura, FL
In 1968 several of Chagall's poems were published in the album "Les Poemes" (The Poems). He also illustrated this album, featuring a series of 24 woodcuts. Unsigned. From the edi...
Category

Marc Chagall
Maternity with Centaur from Chagall by Jacques Lassaigne, 1957

Free Shipping
La Vision d'Ezechiel
By Marc Chagall
Located in New York, NY
A very good impression of this etching and aquatint with hand coloring in watercolor. Initialed and numbered 90/100 in pencil by Chagall. Printed by Haasen, Paris. The project initia...
Category

Marc Chagall prints and multiples for sale on 1stDibs

1stDibs offers a wide variety of authentic Marc Chagall prints and multiples for sale. You can find work that includes elements of blue, orange, pink and other colors if you are browsing the collection of prints and multiples to introduce a pop of color in a neutral corner of your living room or bedroom. You can also browse by medium to find art by Marc Chagall in aquatint, etching, lithograph and more. Much of the original work by this artist or collective was created during the 20th Century and is mostly associated with the Modern style. Not every interior allows for large Marc Chagall prints and multiples, so small editions measuring 4.139999866485596 inches across are available. Customers who are interested in this artist might also find the works of Jean Cocteau, Pablo Picasso and Alexander Calder. On 1stDibs, the price for these items starts at US$75 and tops out at US$475,000, while the average work can sell for US$1,439.