H 31.5 in. W 27.5 in. D 34 in.
French Napoleon III Armchair in Red Velvet
Located in Buchanan, NY
Extremely comfortable Napoleon III armchair with tufted back, upholstered in vintage rich red velvet. The legs have been recently refinished, and new casters have been installed on t...
Category

H 32 in. W 34 in. D 31 in.
Napoleon III Armchair Frame
Located in Buchanan, NY
Napoleon III armchair frame with fruitwood trim and legs. This piece is sold in "as is" condition.
Category 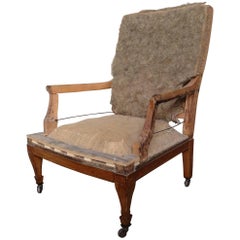 H 30.5 in. W 29 in. D 33 in.
Pair of French Napoleon III Armchairs in Lavender Linen
Located in Buchanan, NY
A pair of French 19th century Napoleon III armchairs upholstered in lavender linen with a contrasting back panel. The armchairs are in very good vintage condition, and while the upho...
Category

H 27 in. W 22.75 in. D 25.75 in.
Napoleon III Armchair, France Second Half of the 19th Century
Located in Greding, DE
A Napoleon III armchair on s-shaped legs with a curved frame. The high, rounded backrest as well as the seat and armrests are upholstered. The golden patinated frame is decorated wit...
Category

Napoleon III Armchair, France Second Half of the 19th Century

H 33.08 in. W 28.35 in. D 29.53 in.
French Napoleon III Fauteuil/ Armchair in Walnut with Upholstery, circa 1870
Located in Miami, FL
A beautiful Napoleon III Fauteuil in walnut with carved flowers in high relief on the crest rail, with upholstered back, seat and padded scroll arms, and resting on cabriole front le...
Category

French Napoleon III Fauteuil/ Armchair in Walnut with Upholstery, circa 1870

H 30.32 in. W 27.56 in. D 27.96 in.
Pair of Large Napoleon III Armchairs in Gold and Red
Located in Buchanan, NY
Interesting pair of French Napoleon III armchairs upholstered in a yellow patterned fabric and trimmed in contrasting red/coral velvet and finished off in contrasting bullion fringe....
Category

Pair of Large Napoleon III Armchairs in Gold and Red

H 27.17 in. W 37.41 in. D 23.23 in.
Antique Chair "Chauffeuse" Napoleon III French 19th Century to Recover
Located in Labrit, Landes
Chauffeuse French Napoleon III, circa 1890. The feets are in ebonized wood, Antique, 19th century. It can be recovered with the fabric of your choice to suit your interior. Sound...
Category

H 33.47 in. W 23.63 in. D 29.93 in.
Near Pair of Napoleon III Chairs
Located in Stamford, CT
Circa 1880s near or married pair of Napoleon III chairs, freshly upholstered in linen. Made in France. Please note of wear consistent with age. The first chair measures 29.50 Inches ...
Category

Near Pair of Napoleon III Chairs

H 33.50 in. W 31.00 in. D 35.00 in.
Pair of Napoleon III Upholstered Armchairs in Ebonized & Burl Walnut, circa 1870
Located in Miami, FL
A beautiful pair of Napoleon III armchairs with walnut frame with burled walnut and ebonized details. Shield-back has carved laurel leaves with a cartouche over the crest rail with f...
Category

Pair of Napoleon the 3d Armchairs

H 34 in. W 30 in. D 32 in.
Pair of Scrolled Back Napoleon III Armchairs in Persimmon Velvet
Located in Buchanan, NY
An elaborately upholstered pair of French armchairs with scrolled backs. The vintage fabric is a rich orange / persimmon velvet that is accented by a braided rope along the arms and ...
Category

Pair of Scrolled Back Napoleon III Armchairs in Persimmon Velvet

H 37 in. W 32.5 in. D 37 in.
Pair of Louis XV Velvet Armchairs Napoléon III Period 19th Century
Located in Beuzevillette, FR
Beautifull Louis 15 style cabriolet Armchair dating from the Napoléon III period. Its 4 legs are curved. The armrests are sculpted bringing a certain elegance. The top of the backres...
Category

H 39 in. W 30 in. D 33 in.
French Style Armchair in Burgundy Velvet and Bouillon Fringe
Located in Buchanan, NY
A very unusual armchair in the French style that is upholstered in a rich burgundy and trimmed with matching bouillon fringe the arms as well as at the bottom. The chair is in very g...
Category

H 34 in. W 30 in. D 21 in.
Pair of Large 19th Century French Armchairs
Located in Buchanan, NY
Pair of French Napoleon III armchairs in a red and tan striped fabric. These chairs are in a larger scale for the period, with deeper seats. Very good condition. Ref #: SN0615-13 D...
Category

H 39 in. W 23.5 in. D 22 in.
Small Armchair Designed as a Dog Bed
Located in Buchanan, NY
Small French armchair most likely made for someone's pet, circa 1920s. Makes a great dog bed. Upholstered in the original Art Nouveau print fabric.
Category

H 21 in. W 23 in. D 24.5 in.
Pair Of Papier Mâché Armchairs, XIXth Century
Located in MARSEILLE, FR
Beautiful pair of papier-mâché armchairs, decorated with painted flowers and butterflies or in mother-of-pearl, on a black lacquered background The seat is in caning, in good cond...
Category

H 46.46 in. W 26.38 in. D 23.23 in.
Pair of 19th Century Black Leather Library Armchairs
Located in GB
We are delighted to offer for sale this large and very comfortable pair of Napoleon III antique French library armchairs. Quality black leather and studded on the front & back edges,...
Category

H 38.19 in. W 32.29 in. D 33.86 in.
Antique Pair of Garden Armchairs Cast Iron Oak Lion Heads+Paws Acanthus Leaf
Located in Munich, DE
This pair of substantial cast iron and oak armchairs was made in France in circa 1860-1870. The iron armrests were designed as acanthus leaves surronded by scrollwork and terminating...
Category

How Much is a Napoleon Iii French Armchair?