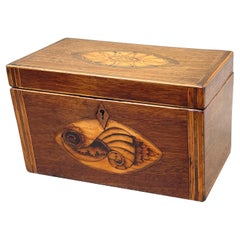 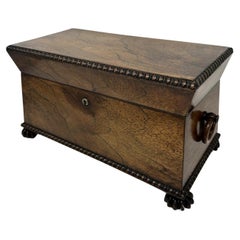 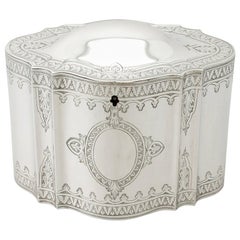 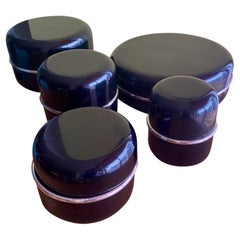 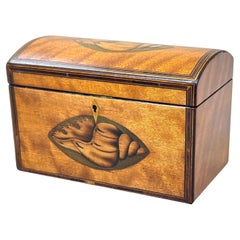 Antique English Inlaid Mahogany Tea Caddy, circa 1790
Located in Bath, GB
A very handsome George III tea caddy, made from Mahogany and beautifully inlaid with panels and highly decorative foliate marquetry to the front and top. The top has a handsome cast ...
Category

Free Shipping
Black And Gold Lacquered Rectangular Tea Box
Located in Firenze, IT
SHIPPING POLICY: No additional costs will be added to this order. Shipping costs will be totally covered by the seller (customs duties included). Black and gold lacquered rectangul...
Category

Silver Tea Caddy. The collection of U.S. President Cleveland and his descendants
By Lionel Alfred Crichton 1
Located in London, London
Hallmarked in London in 1918 by L. A. Crichton, this stunning, Antique Sterling Silver Tea Caddy, is in the Neoclassical taste, featuring engraved decoration throughout. The tea cadd...
Category

Silver Tea Caddy. The collection of U.S. President Cleveland and his descendants

Bugbear Coconut Tea Caddy on Silver Dolphin Base
Located in Dallas, TX
A Bugbear coconut tea caddy mounted on a silver dolphin base. Bugbear coconuts were carved by sailors on long voyages in the 18th and early 19th centuries.
Category

Georgian Pear Fruit Tea Caddy
Located in Northampton, GB
This Unique Antique Pear Tea Caddy holds a beautiful shape and patination, has a steel hinge and escutcheon. This Pear Tea Caddy is topped with a realistic pear stalk and has a re...
Category

Vintage Asprey Silver Plated Car Tea Caddy, C.1950
By Asprey & Garrard Limited
Located in Bath, GB
A rare find, this novelty tea caddy by Asprey of Bond Street dates to around 1950 / 1960. In the form of an antique car with working wheels, it comes with the original tea caddy s...
Category

Victorian Tea Caddy Box Faux Tort 1890
Located in Potters Bar, GB
A fine Victorian simulated faux tortoise shell tea caddy Circa 1890 Some of our items are in storage so please check ahead of a viewing to see if it is on our shop floor Offered i...
Category

French Black Lacquer, Mother of Pearl and Brass Inlay Tea Caddy
Located in Tampa, FL
A beautiful tea caddy with original key and original interior it is black lacquer, mother of pearl and has a brass inlay design all over the box. 19th century, France.
Category

Pair of English Tea Canisters 19th Century
Located in Stamford, CT
Circa 1880s pair of English tea canisters in tin. The canisters feature a green painted surface with gilded "B" and "D" accent letters. Made in England. Please note of wear consisten...
Category

Antique Miniature Shagreen & Silver Tea Caddy France Circa 1840
Located in London, GB
A rare mid-19th century miniature shagreen & silver tea caddy, date Circa 1840, Origin France. This Caddy is in original condition, the Shagreen does have blemishes but the overa...
Category

English Regency Georgian Period Inlaid Mahogany Sarcophagus Tea Caddy
Located in Forney, TX
Classic refined elegance and sophistication at its finest. Born at the turn of the late 18th / early 19th century, during the height of the golden age of English furniture and de...
Category

There are lots of uses for your vintage, new or antique tea caddies, but they can certainly serve their original intended purpose if needed.

When tea first gained popularity during the 1800s, and teatime became commonplace in homes all over England, it was an expensive commodity owing to excessive taxation. (This, of course, inevitably yielded a black market for tea leaves.) Tea drinkers hoarded their precious goods, which began to arrive in London ports from China during the 17th century, under lock and key. In luxury homes, tea leaves were stowed away in a decorative jar or canister called a tea caddy that was fitted with a lock, or, alternatively, the container was kept in a secured chest or storage cabinet.

Tea was thought to be not just a delicious drink but also to have medicinal benefits. The Chinese had been praising the healthy properties of tea, and wealthy Europeans were eager to discover its benefits for themselves during their ritual afternoon tea. The idea of “teatime” wasn’t a social event in upper-class British homes until the 1830s or 1840s. During Queen Victoria’s reign, small baked treats might be served with your beverage, and teakettles and coffeepots were part of tea services that could include teacups, saucers, a milk pot and other accessories.

When tea cultivation was relegated to British colonies such as India, and the British East India Company could no longer hold onto its trade monopoly with China, tea was no longer a ritual confined to the wealthy. Today, antique and vintage tea caddies are collector’s items all over the world.

Tea caddies weren’t unique to Europeans. The earliest pieces originated in China. Surviving hand-painted examples from China or elsewhere in Asia made of porcelain might feature enameled landscapes or other designs. At the Taft Museum of Art, there are striking enameled 18th-century-era tea caddies of copper that were given to the institution in 2014. Wooden tea caddies materialized over time and were seen as sturdier than their ceramic counterparts.

Today, there are all kinds of ways to use a vintage tea caddy if you’re passing on tea. They’re a welcome decorative flourish on the mantel in your living room, for example. A metal tea caddy, lined with a plastic bag, can be used to cultivate an herb garden on your kitchen windowsill. An old wooden tea caddy can help keep your paper clips or pushpins organized on your desk too. If you’re always on the go, a tea tin is good for packing earbuds, hand sanitizer, gum or whatever else that might get easily lost in a roomy crossbody messenger bag or other shoulder bag.