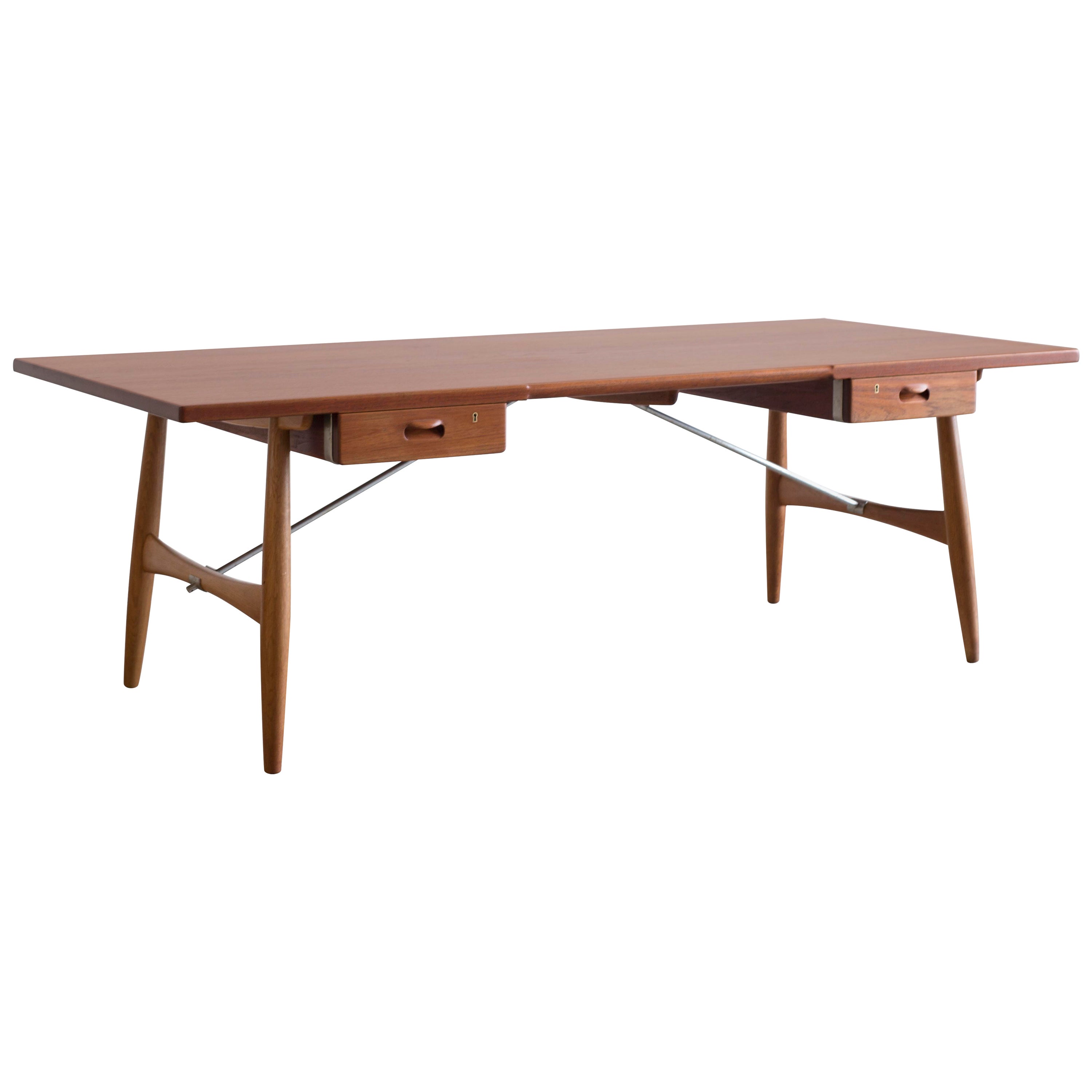 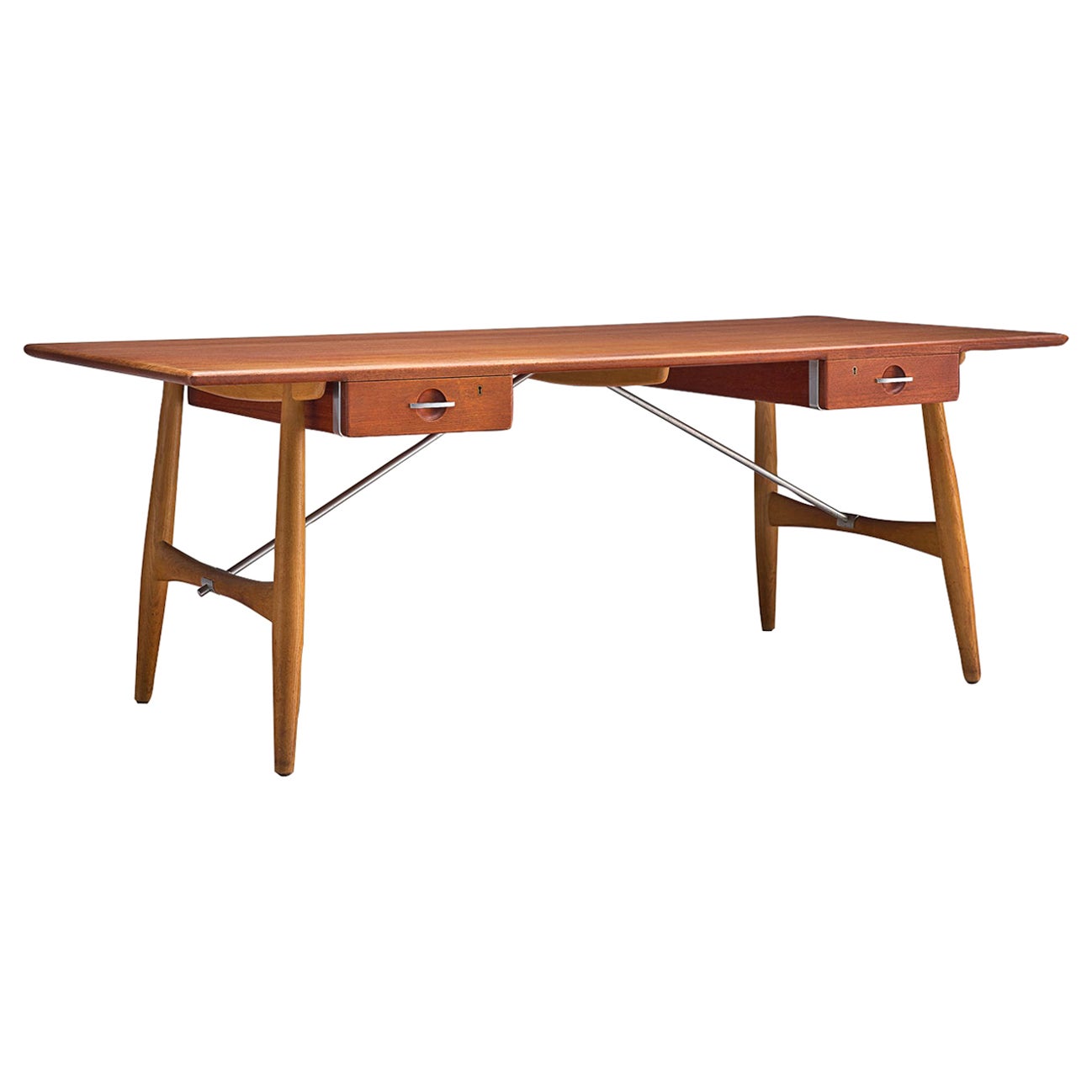 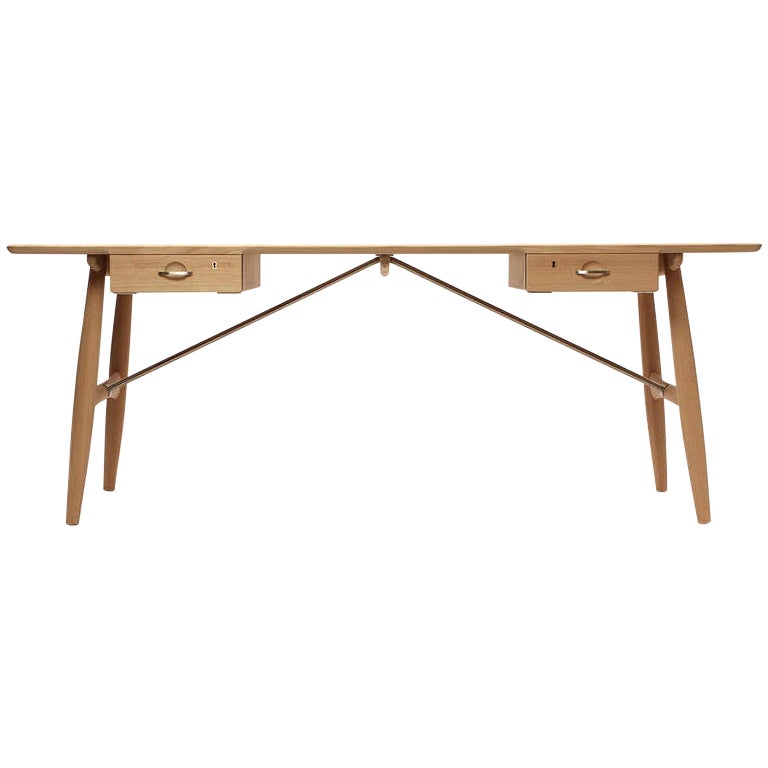 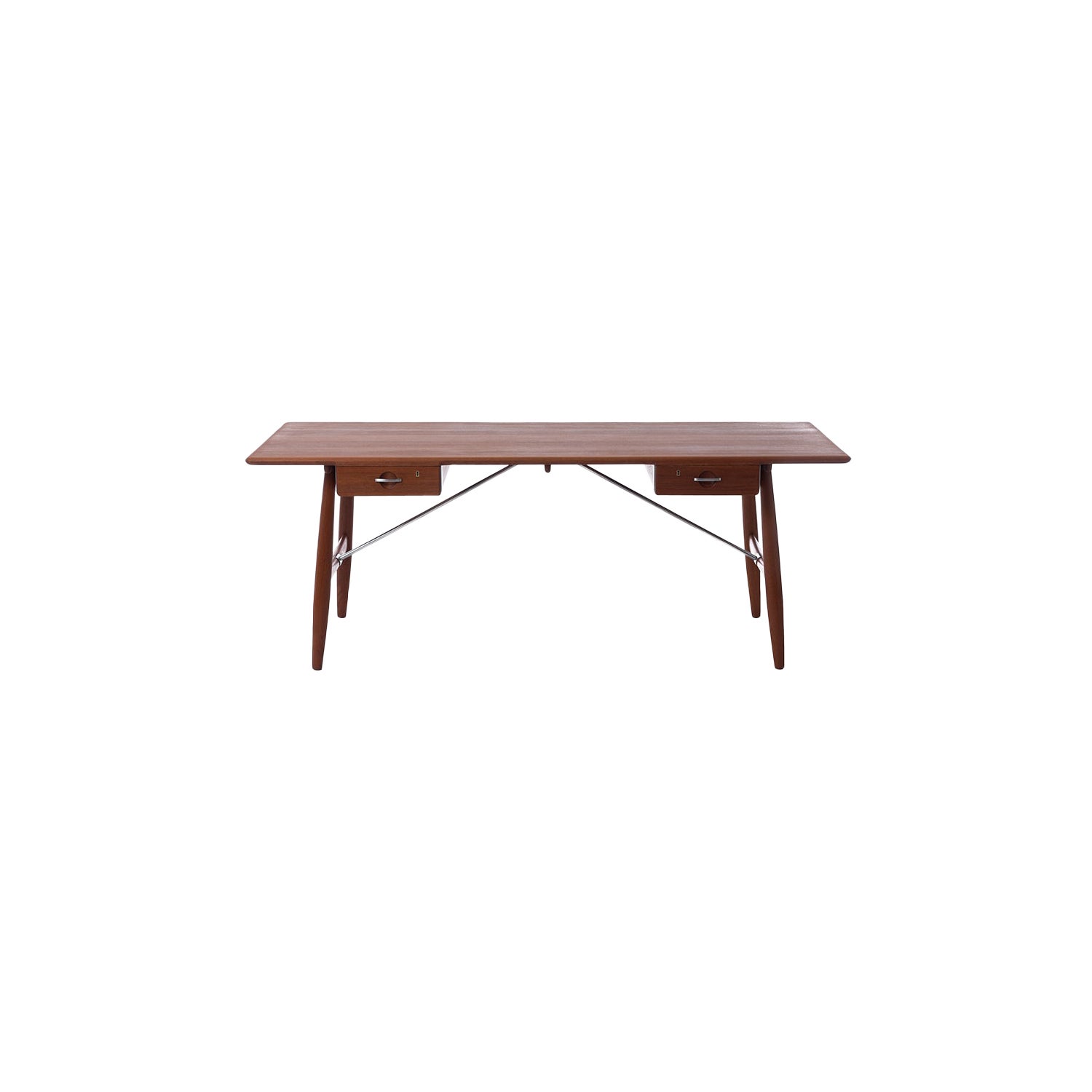 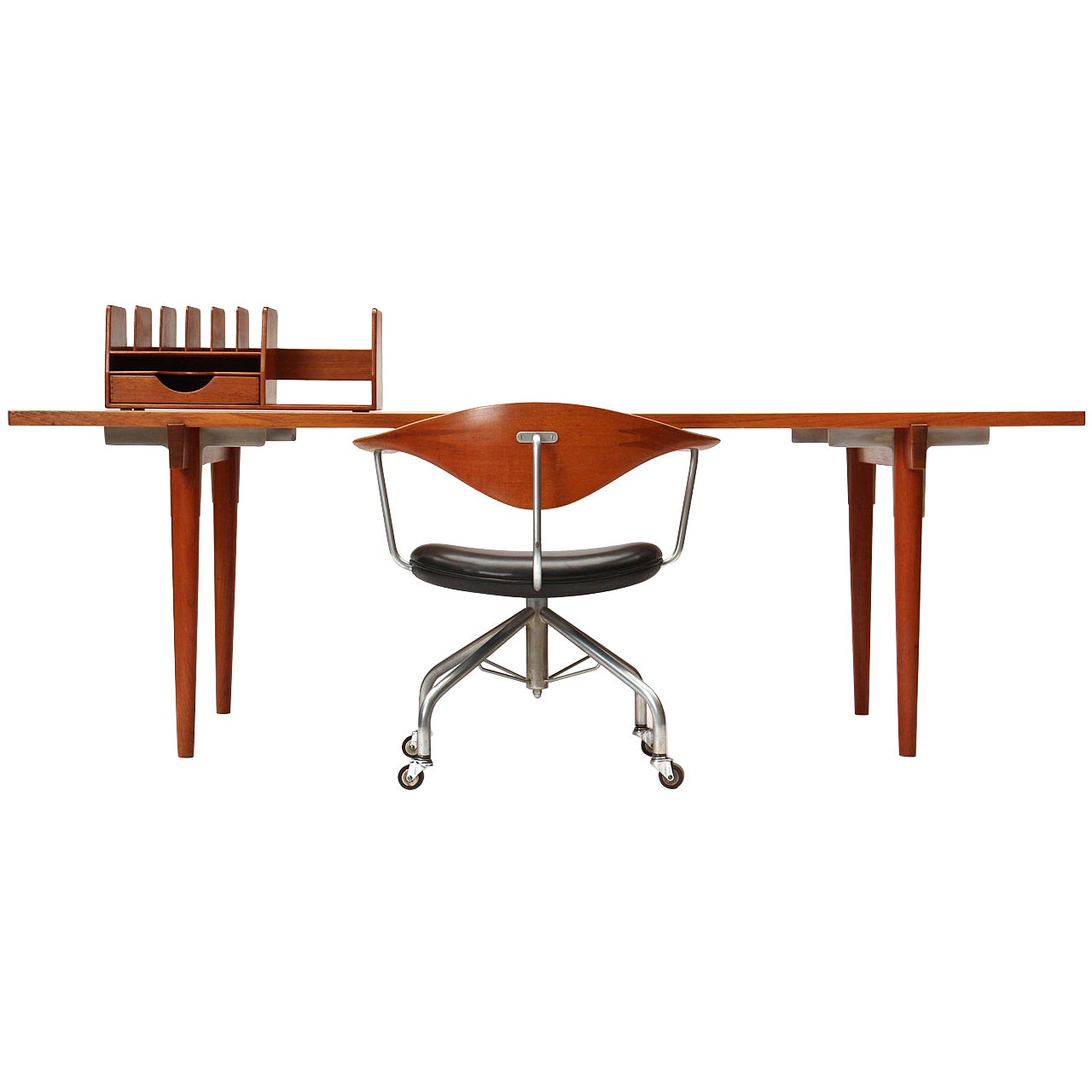 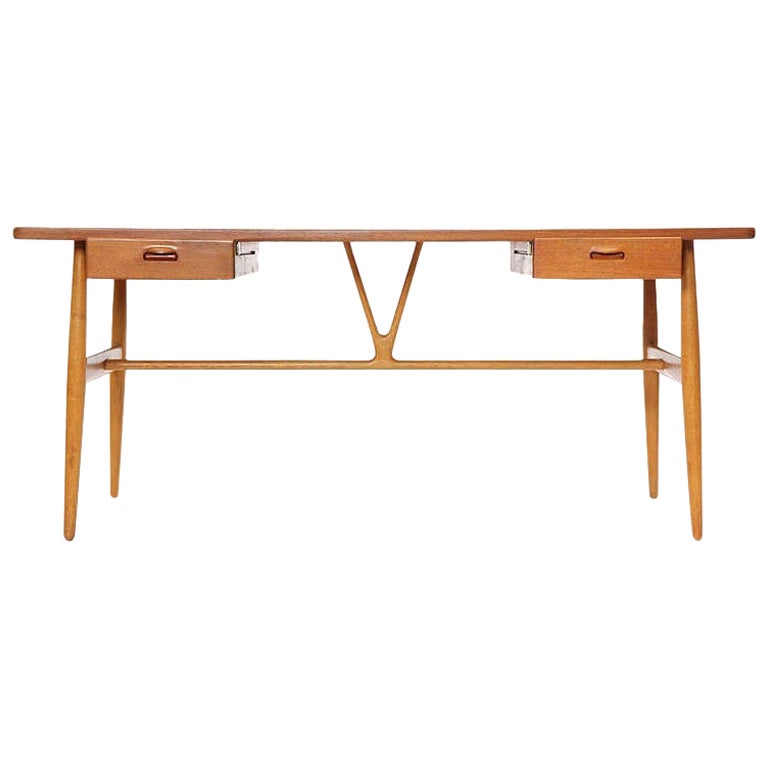 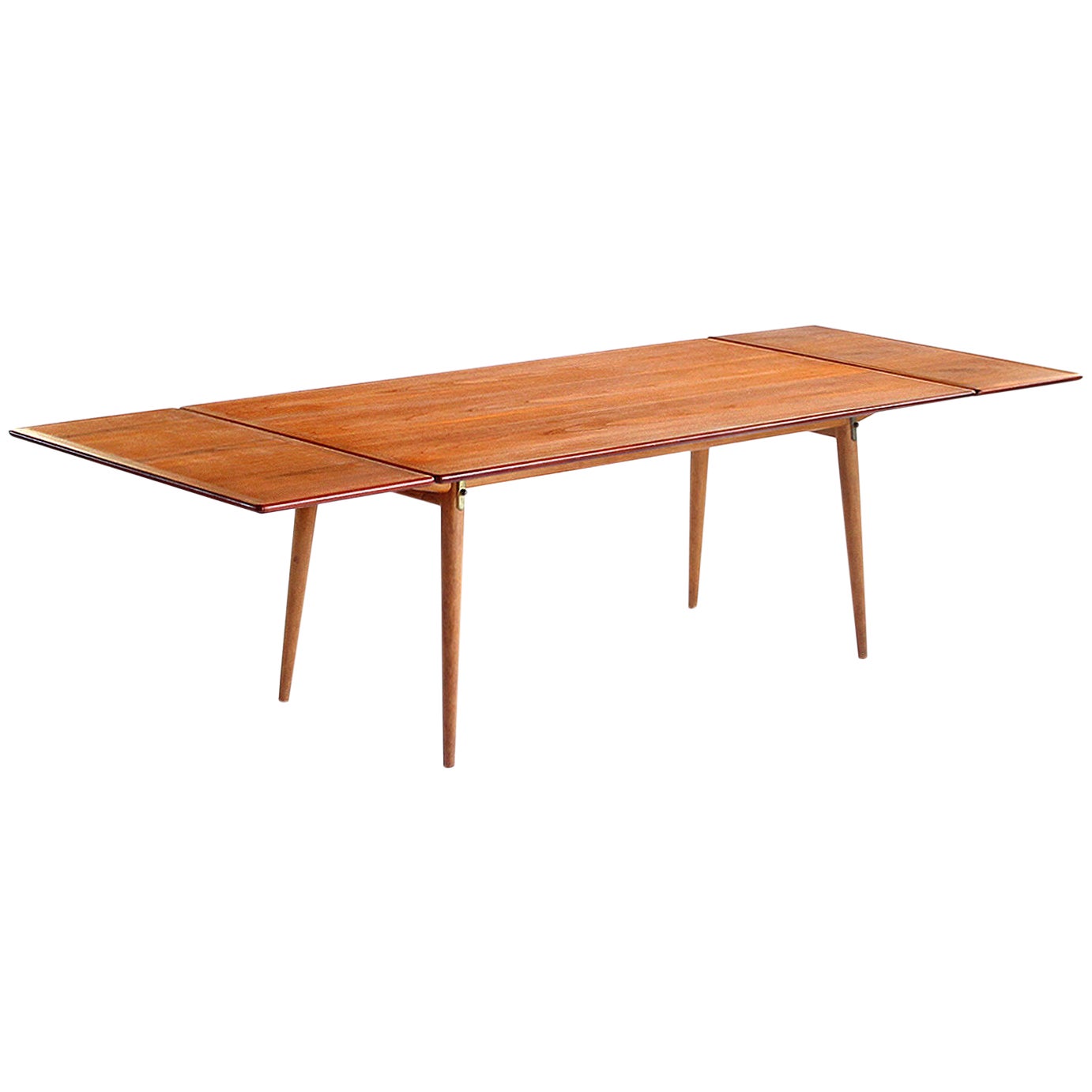 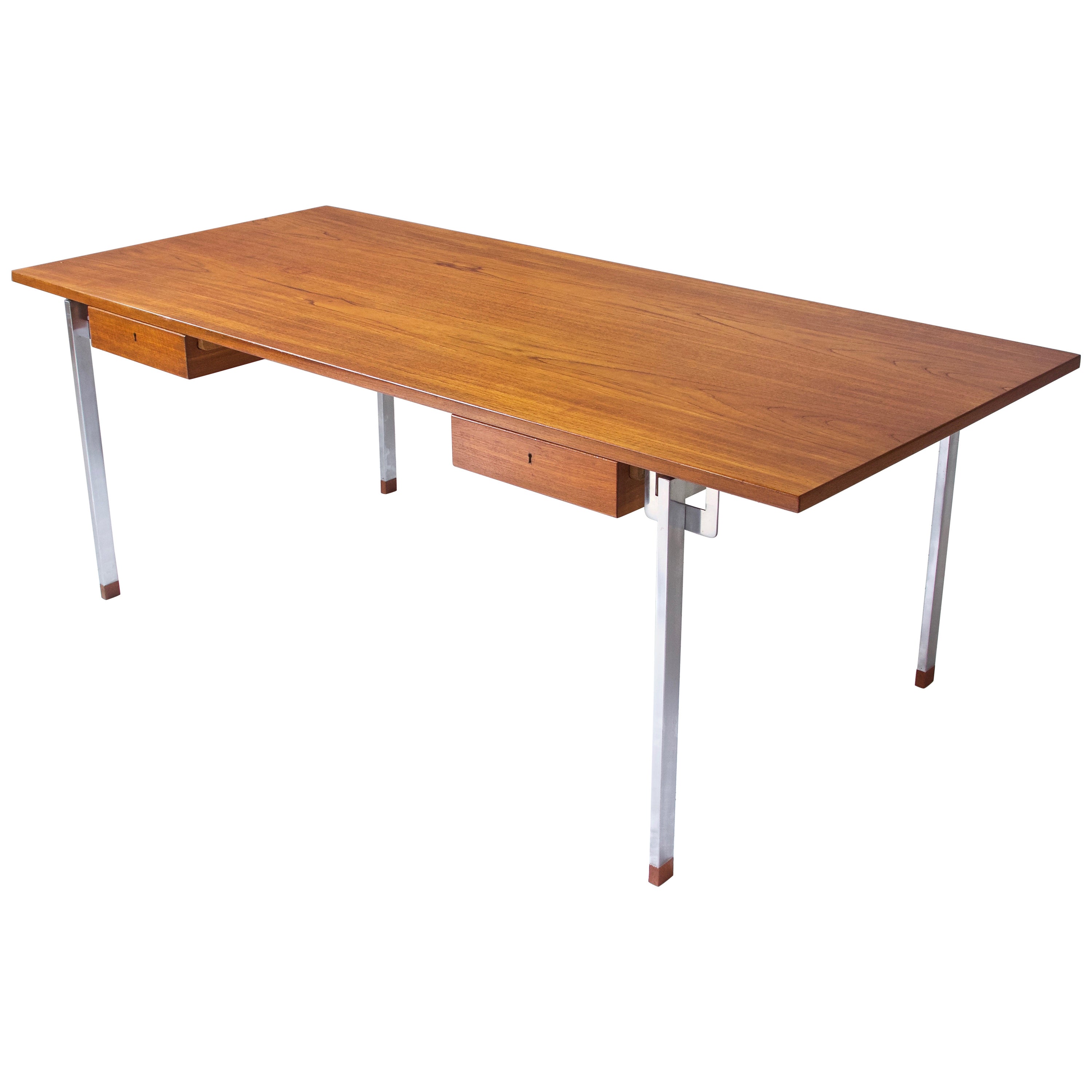 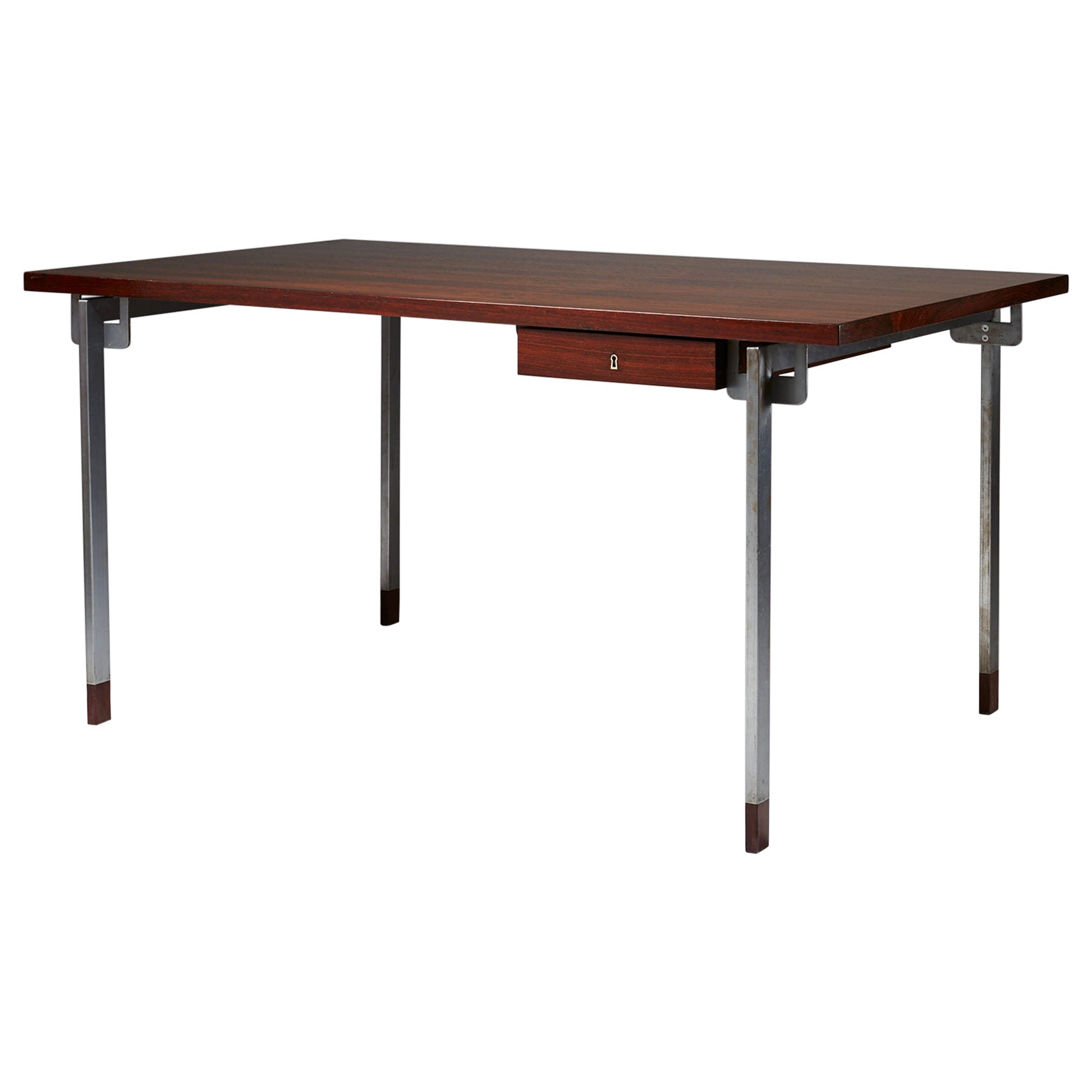 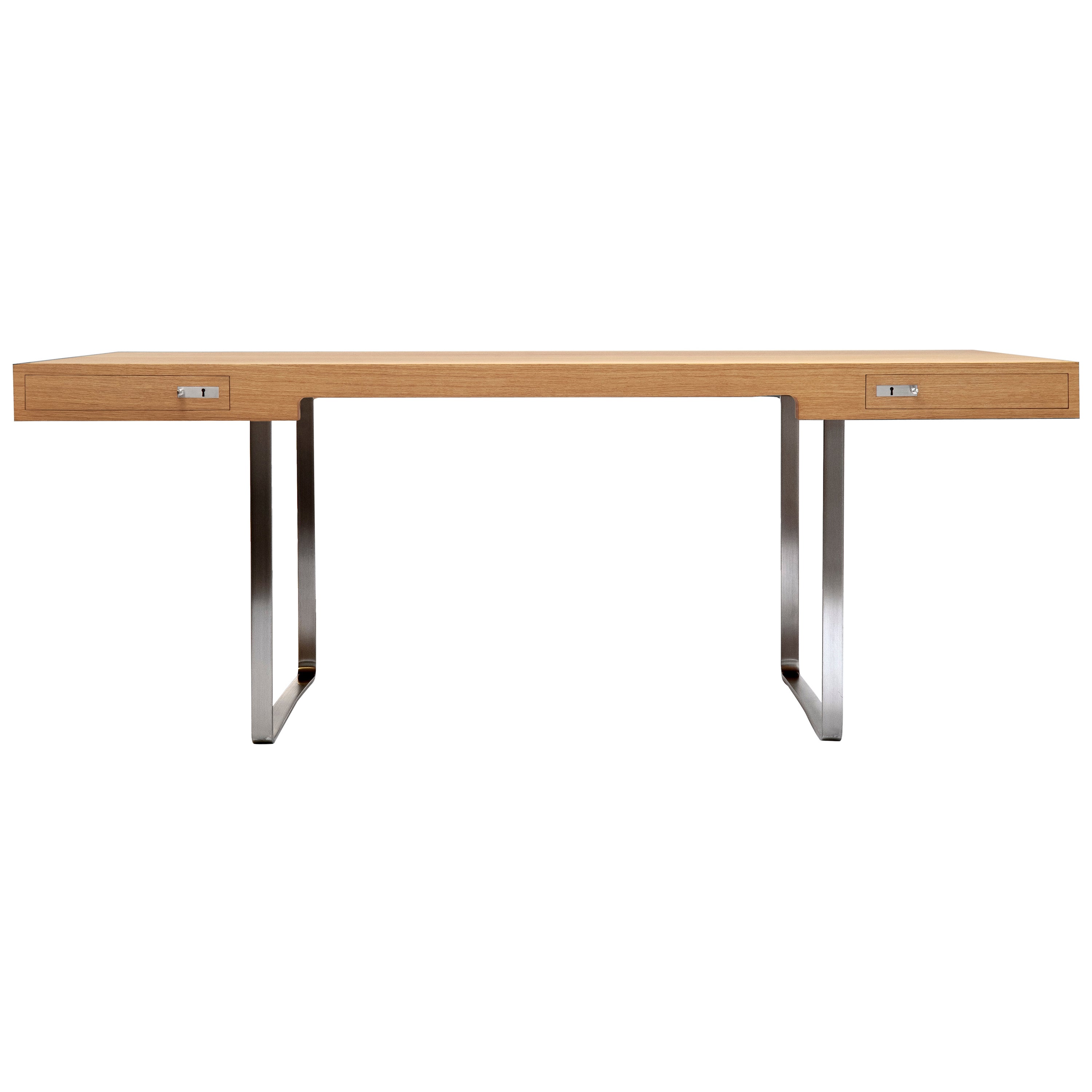 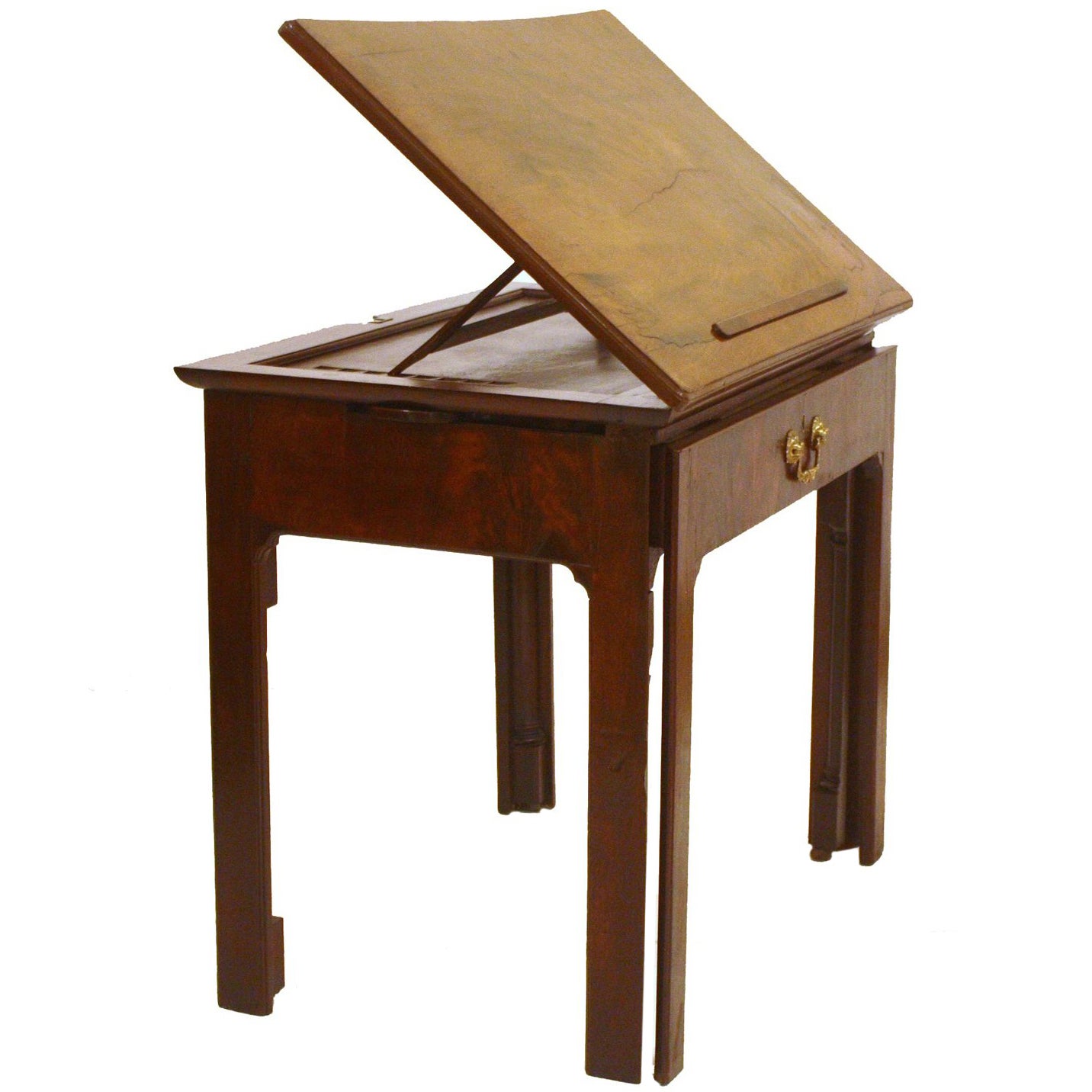 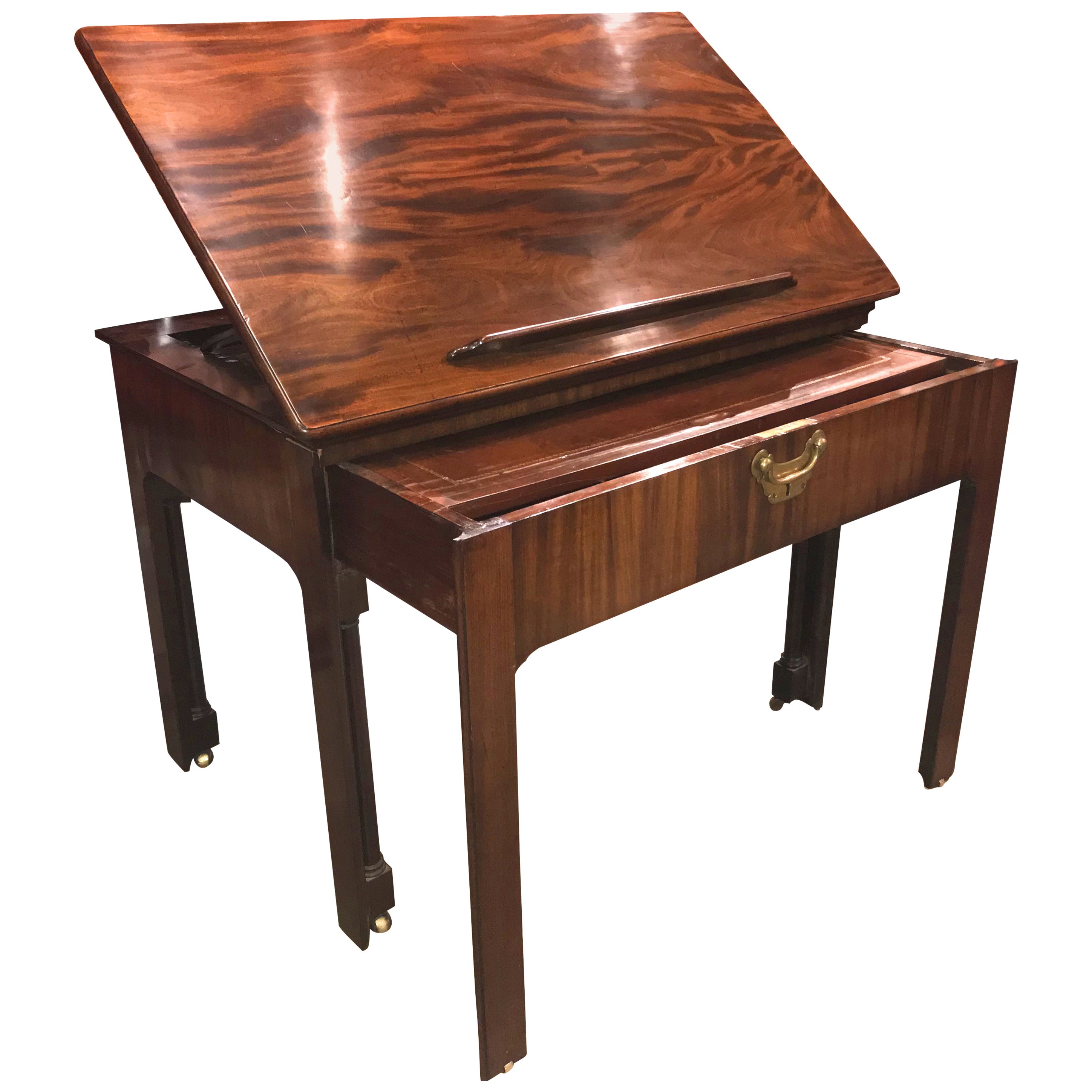 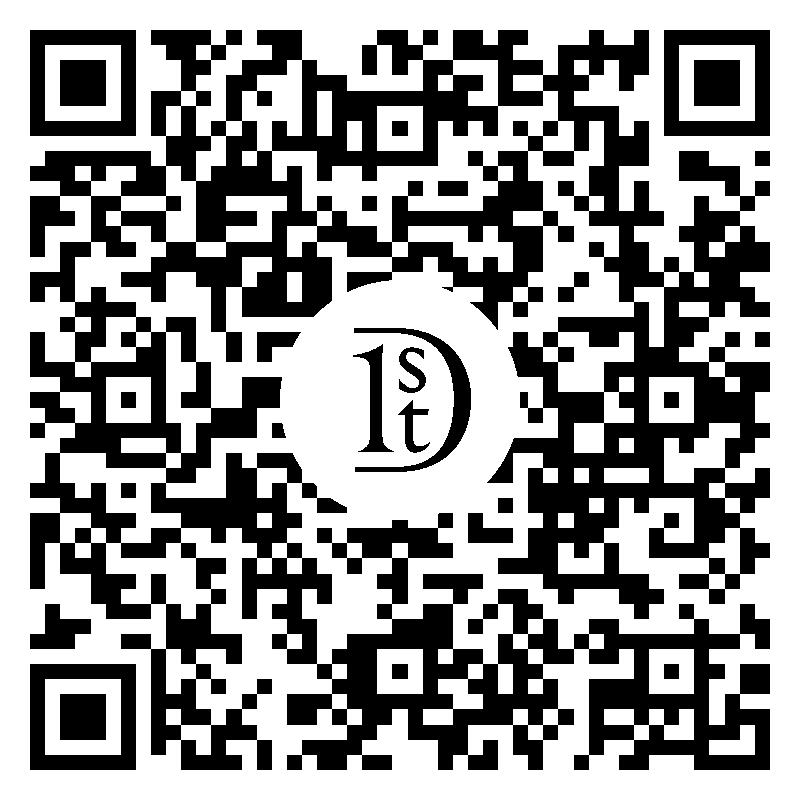 Hans J. Wegner for Johannes Hansen, Architect's desk JH571, teak, oak and metal, Denmark, 1953. This must be one of the most Wegnerian of all the designer's desks. It's boldly angled legs are held in place by diagonal struts. The basic design take its cue from seventeenth-century Spanish tables that also had slanted legs and metal struts. From a distance this piece of furniture presents a strong graphic outline. Every part of the desk is separate from the rest; for instance, the drawers hang loosely beneath the tabletop. Hans Wegner (1914-2007) is one of the most profilic furniture designers of the world. Wegner's furniture was designed with the greatest understanding of materials, construction techniques, and use. Wegner is known to be an excellent cabinet maker with thorough understanding of the materials he worked with, yet his greatest aim was to create expressive and exciting design. Although Wegner was a functionalist, he was not a rational dogmatist such as Kaare Klint, of whom he was a student. Instead, his designs sparkle with inventiveness and sculptural sense. But this never meant that his organic and sensuous forms left the strict rules of functionalism. At heart, Wegner was an idealist. He was relentless in his quest for the best chair: 'there is never one damn thing that cannot be made better'. But Wegner was aware of the fact that you cannot design the 'perfect' chair, which gave him the freedom to produce as much as possible. He left behind more than 3500 drawings and about 500 of his designs went into production. His designs feature in the UN Building and Seagram Building in New York, UNESCO's headquarters. NATO's headquarters in Paris, and several buildings by the architects Skidmore, Owings & Merrill. Literature: Olesen, Christian Holmsted. Wegner. Just one good chair. Ostfildern: Hatje Cantz, 2014, p. 240. 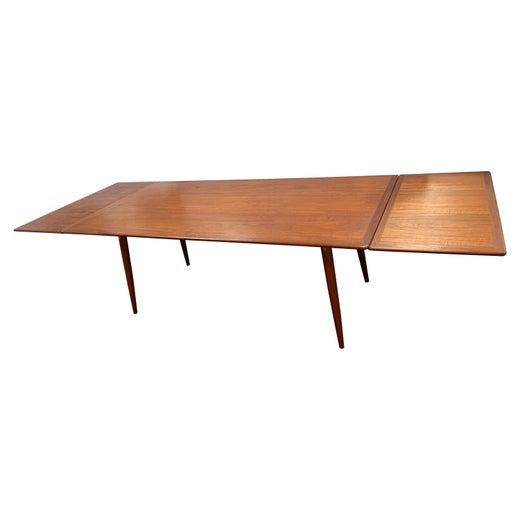 Best known for his chairs and seating pieces — though a master of many furniture types like sofas and tables — Hans Wegner was a prolific designer whose elegant, often ebullient, forms and devotion to the finest methods in joinery made "Danish Modern" a popular byword for stylish, well-made furniture in the mid-20th century. Wegner considered himself a carpenter first and a furniture designer second. Like his peers Arne Jacobsen and Finn Juhl, Wegner believed that striking aesthetics in furniture were based on a foundation of practicality: a chair must be comfortable and sturdy before it is chic. In keeping with that tenet, several of Wegner’s best chair designs, seen in dealer listings below, have their roots in traditional seating forms. The Peacock chair (designed in 1947) is a throne-like adaptation of the Windsor chair; pieces from the China chair series (begun in 1944) as well as the 1949 Wishbone chair, with its distinctive Y-shaped back splat, are derived from 17th-century Ming seating pieces, as is the upholstered Ox chair (1960). Wegner’s comfy Papa Bear chair (1951) is an almost surreally re-scaled English wingback chair. Wegner’s most representative piece, the Round chair (1949), gained a footnote in political history when it was used on the TV stage of the first Kennedy-Nixon debate of 1960. That chair, along with Wegner’s more bravura designs, for example the 1963 Shell chair, with its curved surfboard-shaped seat, bring a quietly sculptural presence to a room. Wegner was a designer who revered his primary material — wood — and it shows. His wood gathers patina and character with age; every Hans Wegner piece testifies to the life it has led.

Recognized Seller
These prestigious sellers are industry leaders and represent the highest echelon for item quality and design.
Diamond Seller
These expertly vetted sellers are 1stDibs' most experienced sellers and are rated highest by our customers.
Established in 2006
1stDibs seller since 2012
3,313 sales on 1stDibs
Typical response time: 1 hour
Associations
20th Century Specialists
More From This Seller