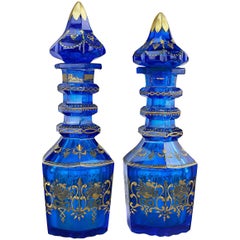 H 0.01 in. Dm 0.01 in.
Collection of 3 Green Glass French Demijohn Bottles
Located in Port Chester, NY
A collection of three olive colored glass demijohn bottles, used from the late 17th century through the 19th century to carry wine and spirits. Hand blown, each has their own unique ...
Category

H 16.5 in. Dm 11.5 in.
Collection of 3 Green Glass French Demijohn Bottles
Located in Port Chester, NY
A collection of three olive colored glass demijohn bottles, used from the late 17th Century through the 19th Century to carry wine and spirits. Handblown, each has their own unique c...
Category

H 12.25 in. Dm 7 in.
Glass Perfume Bottle with Mary Gregory White Enameled Boy, circa 1900
By Mary Gregory
Located in Lincoln, Lincolnshire
This is a beautiful clear glass perfume or scent bottle with "Mary Gregory" white enameled decoration of a boy playing. We date this piece to circa 1900 and probably made in Bohemia,...
Category

H 4.25 in. W 1.57 in. D 1.2 in.
Victorian Ruby Glass Perfume Bottle with Hand Gilded Decoration, Ca 1870
Located in Lincoln, Lincolnshire
This is a good quality and very attractive Victorian glass perfume bottle, Ca 1870. The circular bottle is made of moulded ruby glass and has its original stopper. The bottle has ...
Category

H 3.5 in. Dm 1.32 in.
Victorian Cut-Glass Crystal Perfume Bottle Sterling Silver Neck Ring, Circa 1896
By William Wheatcroft Harrison & Co. 1
Located in Lincoln, Lincolnshire
This is an attractive Victorian cut glass or crystal perfume bottle with a sterling silver neck ring made by William Harrison of Sheffield, England in 1896. The bottle has a slight...
Category

H 16 in. Dm 11 in.
Large Antique Jadeite Glass Perfume Bottle with Ornate Gilt Brass Top and Mounts
Located in Hamilton, Ontario
This large antique perfume bottle is unsigned, but presumed to have been made Bohemia (Austria or the Czech Republic) in circa 1880 in the Renaissance Revival style. The bottle itsel...
Category

H 5.12 in. Dm 4.14 in.
Early 19th Century Charles X Opaline perfume bottle with Desvignes Decoration
By Jean-Baptiste Desvignes
Located in Paris, FR
Conical flask on a high foot in opaline crystal with its flattened stopper. A star-shaped pattern highlighted with small flowers decorates the top of the stopper, and gilt bands unde...
Category

H 2.96 in. W 1.58 in. D 1.58 in.
Early 19th Century White Opaline Perfume Bottle with Desvignes Decoration
By Jean-Baptiste Desvignes
Located in Paris, FR
White, opaline crystal flask and its flattened stopper, decorated with a gilded, radiant flower on top. Gilded stripes surround the collar, and a ring of laurels, garlands of roses, ...
Category

H 3.15 in. Dm 3.75 in.
Pair of Blue Opaline Perfume Bottles Decorated by Desvignes
By Jean-Baptiste Desvignes
Located in Paris, FR
Pair of blue opaline perfume bottles with their ball-shaped stoppers. A rose and gilded petals decorates the tops of the stoppers, and gold bands highlight the necks of the bottles. ...
Category

H 6.63 in. W 1.63 in. D 1.63 in.
Biedermeier Glass Bottle with Lid Mouth Blown Enamel Painted, Austria circa 1850
Located in Lichtenberg, AT
Graceful Austrian Biedermeier glass bottle with lid out of Vienna, the epicenter of this famous era. Made circa 1850, this decorative mouth blown glass bottle with a light green shin...
Category

H 4.34 in. Dm 3.75 in.
Pair of Opaline Flasks with Gothic Decoration
By Jean-Baptiste Desvignes
Located in Paris, FR
Pair of white soap bubble opaline flasks with their ball-shaped stoppers. The perfume bottles are each decorated with a frieze of gold Gothic arcades and blue forget-me-nots. Gilded ...
Category

H 7.75 in. Dm 3.63 in.
Pittsburgh Glass Bar Bottles or Decanters, Bakewell, Pears & Co.
Located in Downingtown, PA
A pair of mold-blown Pittsburgh bar bottles. Made of a nice heavy glass, these were designed to be used without a stopper. The mold impression is strong and very well defined through...
Category

H 10.75 in. Dm 4.5 in.
Antique Glass Cotton Swab Bottle with Sterling Silver Top
Located in Great Barrington, MA
The antique faceted glass bottle with a sterling (stamped) silver top was used for cotton swabs and was possibly part of a larger set of a ladies cosmetic containers. The top of the ...
Category

H 13 in. Dm 9.06 in.
A 19th Century Snuff Bottle
Located in London, GB
A Glass Snuff Bottle and lid
Category

How Much are 19th Century Glass Bottles?

Finding the Right Glass for You

Whether you’re seeking glass dinner plates, centerpieces, platters and serveware or other items to elevate the dining experience or brighten the corners of your living room, bedroom or other spaces by displaying decorative pieces, find an extraordinary range of antique, new and vintage glass on 1stDibs.

Glassmaking is more than 4,000 years old. It is believed to have originated in Northern Mesopotamia, where carved glass objects were the result of a series of experiments led by potters or metalworkers. From there, the production of glass vases, bottles and other objects proliferated in Egypt under the reign of Thutmose III. Later, new glassmaking techniques took shape during the Hellenistic era, and glassblowing was invented in contemporary Israel. Then, on the island of Murano in Venice, Italy, modern art glass as we know it came to be.

Over the years, collectors of glass decorative objects or serveware have sought out distinctive antique and vintage pieces of the mid-century modern, Art Deco and Art Nouveau eras, with artisans such as Archimede Seguso, René Lalique and Émile Gallé of particular interest for the pioneering contributions they made to the respective styles in which they worked. Today, long-standing glassworks such as Barovier&Toso carry on the Venetian glasswork tradition, while modern furniture designers and sculptors such as Christophe Côme and Jeff Zimmerman elsewhere test the limits of the radical art form that is glassmaking.

From chandeliers to Luminarc stemware, find a collection of antique, new and vintage glass on 1stDibs.

Questions About 19th Century Glass Bottles
Prices for most 19th century glass bottles on 1stdibs are negotiable. You’ll see a "Make an Offer" button on the item details page, indicating that the seller is willing to consider a lower price. It’s not uncommon for customers to get 15–25% off the list price after negotiating. See our tips for negotiating like a pro.
Only experienced, professional sellers who have applied and been thoroughly vetted by our team of experts can sell 19th century glass bottles and other quality items on our site. Learn more about becoming a 1stdibs seller.
The 1stdibs Buyer Protection Guarantee provides coverage for qualified purchases in the unlikely event that the item arrives not as described or is damaged. We’ll work with you and the seller to find a resolution, ensuring your satisfaction. View details
We have partnerships with the world's best shipping providers to facilitate seamless and fully-insured delivery from the seller's location directly to you, wherever you are in the world. Our logistics team is comprised of dedicated members who arrange all the details with our partners, servicing and supporting all shipments. Learn more about shipping on 1stdibs.
For your convenience, we offer multiple payment methods, including all major credit cards and PayPal. For many purchases we also offer financing options or wire transfer. Learn more about payment options on 1stdibs. 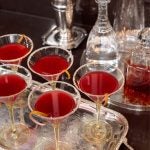