H 26 in. W 26.38 in.
Ada X 2 - 21st Century, Alex Katz, Contemporary, Portrait Print, Ada, Woman
By Alex Katz
Located in Köln, DE
Since decades, the portraits of his wife Ada are a main and important part in Alex Katz's complete oeuvre. Her portraits seem to be a pictorial diary and a nearly life long companion...
Category

H 32 in. W 48 in.
Red Ada
By Alex Katz
Located in Toronto, Ontario
Alex Katz's works are instantly recognizable and adored internationally. Born in 1927 Katz has been dedicated to art-making since the 1950's - however it wasn't until the following...
Category

H 22 in. W 30 in.
Ada x2
By Alex Katz
Located in New York, NY
Working from his favorite muse, the double image of the artist’s wife is an archival pigment print created by Alex Katz in 2020.  Ada x2 is hand-signed by the artist in pencil, and n...
Category 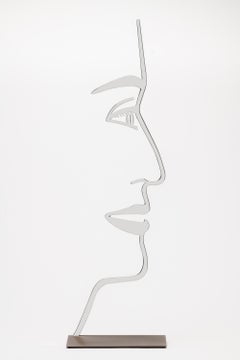 H 22 in. W 30 in.
Ada 1 (Outline)
By Alex Katz
Located in Nuernberg, DE
Polished aluminum on bronze base. Signed in the cast. Edition: 35.
Category

H 24.49 in. W 15.01 in. D 5.01 in.
Ada in Spain
By Alex Katz
Located in Bridgehampton, NY
Presented by 'ADAMAR FINE ARTS' for Market Art & Design This sold out edition of Kat's wife and muse Ada was a work from their travels. It is a large scale work and has all of the c...
Category

H 24 in. W 36 in.
Ada and Alex
By Alex Katz
Located in Fairlawn, OH
Signed and editioned in pencil lower left: Alex Katz A portrait of the Artist and his wife. Edition: 75 Printed by Steven Sangenario at Styria Studio Published by Styria ...
Category

H 30 in. W 36 in.
ALEX AND ADA, THE 1960S TO THE 1980S (PORTFOLIO OF 8)
By Alex Katz
Located in Aventura, FL
The complete portfolio, comprising eight unsigned screenprints in colors, 1990, proofs aside from the numbered edition of 150 (total edition includes 30 artist's proofs), on Arches r...
Category

H 45 in. W 42 in.
ADA WITH FLOWERS
By Alex Katz
Located in Portland, ME
Katz, Alex. ADA WITH FLOWERS. Maraval 123. Screenprint in colors, 1980. Edition of 65 plus proofs published by Simca Print Artists, Inc. NY, and with its blindstamp lower right. Sign...
Category

H 55 in. W 42 in. D 4 in.
Ada with Flowers
By Alex Katz
Located in Miami, FL
Painted in 1980, this juxtaposition of Still Life and Portraiture work by Katz is a rare work indeed because of its early date of execution and rare composition. As an artist who lik...
Category

H 59 in. W 47 in.
Bathing Cap, Ada
By Alex Katz
Located in Miami, FL
This large scale work by Alex Katz is amazing and striking with its vivid orange background and piercing gaze by Ada, the artist's wife and muse for his entire working career. This ...
Category

H 17.33 in. W 23.63 in.
Ada in Spain
By Alex Katz
Located in Miami, FL
This sold out edition of Kat's wife and muse Ada was a work from their travels. It is a large scale work and has all of the classic Katz portraiture aspects, including the romance a...
Category

H 30.125 in. W 22.625 in.
The Alex Katz Museum/Ada's Room, Painting, Acrylic on Canvas
By Brian Nash
Located in Yardley, PA
This painting is acrylic on deep profile canvas, wired and ready to hang. :: Painting :: Pop-Art :: This piece comes with an official certificate of authenticity signed by the artist...
Category

You are likely to find exactly the alex katz ada you’re looking for on 1stDibs, as there is a broad range for sale. You can easily find an example made in the Contemporary style, while we also have 13 Contemporary versions to choose from as well. If you’re looking for a alex katz ada from a specific time period, our collection is diverse and broad-ranging, and you’ll find at least one that dates back to the 20th Century while another version may have been produced as recently as the 21st Century. When looking for the right alex katz ada for your space, you can search on 1stDibs by color — popular works were created in bold and neutral palettes with elements of black, orange, beige and gray. Artworks like these of any era or style can make for thoughtful decor in any space, but a selection from our variety of those made in screen print, pigment print and lithograph can add an especially memorable touch. A large alex katz ada can be an attractive addition to some spaces, while smaller examples are available — approximately spanning 11.5 high and 9.5 wide — and may be better suited to a more modest living area.

How Much is a Alex Katz Ada?

The price for an artwork of this kind can differ depending upon size, time period and other attributes — a alex katz ada in our inventory may begin at $3,400 and can go as high as $48,000, while the average can fetch as much as $10,995.