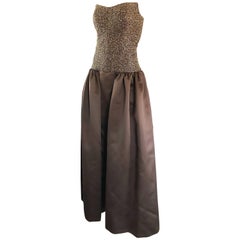 Vintage Bob Mackie Embellished Black Silk Evening Gown Size 10
By Bob Mackie
Located in Port Saint Lucie, FL
This fabulous evening gown was made by Bob Mackie in 1982, around the time he opened his ready-to-wear boutique. Made from black silk, it's covered in tons of black jet beads and fe...
Category

Size: 10
Vintage Bob Mackie Embellished Black Silk Evening Gown Size 10
By Bob Mackie
Located in Port Saint Lucie, FL
This fabulous evening gown was made by Bob Mackie in 1982, around the time he opened his ready-to-wear boutique. Made from black silk, it's covered in tons of black jet beads and fe...
Category

Size: 12
BOB MACKIE Black Skirt Suit Ensemble with Sheer Embellished Accents Size 4-6
By Bob Mackie
Located in Los Angeles, CA
This Bob Mackie ensemble is composed of a black wool with a sheer rhinestone accent at the upper neck and back. The blouse features a zipper closure. The classic pencil style skirt...
Category

Size: 4
BOB MACKIE Black Silk Draped Cocktail Dress with Bow Applique Size 4-6
By Bob Mackie
Located in Los Angeles, CA
This Bob Mackie cocktail dress is composed of a black silk and features a beaded bow applique. There is an open back design with draping from the neck. Center back zipper closure. I...
Category

Size: 4
BOB MACKIE Burnished Red Silk Dress with Black Beaded Bow Neckline Size 8
By Bob Mackie
Located in Los Angeles, CA
This Bob Mackie cocktail dress is composed of a burnished silk with a black beaded neckline and bow detail. There is a center back zipper closure and zippers at the sleeve ends. In ...
Category

Size: 10
Bob Mackie Dramatic Black Taffeta Evening Coat with Propped Collar Size 2 4 6
By Bob Mackie
Located in Los Angeles, CA
This Bob Mackie design is available for viewing at our Beverly Hills Boutique. We offer a large selection of evening gowns and luxury garments. This coat is constructed from a stu...
Category

H 27 in. W 40 in. L 27 in.
Exquisite Bob Mackie Boutique Fully Beaded Evening Gown Early 80s Size 14
By Bob Mackie
Located in Port Saint Lucie, FL
This incredible evening gown was designed by Bob Mackie for his Bob Mackie Boutique label in the early 1980s. The beading on this dress is phenomenal - intricate work against a nude...
Category

L 57 in.
BOB MACKIE Silk Chiffon Gown with Multi-Texture Floral Applique Size 2
By Bob Mackie
Located in Los Angeles, CA
This Bob Mackie gown is composed of nude and off white silk chiffon with a multi textured flower applique with rhinestones. There is a center back zipper closure, with boned bustier ...
Category

Surely you’ll find the exact vintage or contemporary bob mackie size 6 you’re seeking on 1stDibs — we’ve got a vast assortment for sale. If you’re looking for an option in Black and you’re unable to find the right fit, there are plenty of variations in Blue, Gray and protectString (more). Making the right choice when shopping for a bob mackie size 6 may mean looking at versions that date from different eras — you can find early iterations from the 19th Century and a newer version made as recently as the 20th Century, both of which have proven very popular over the years.

How Much is a Bob Mackie Size 6?

Vintage Bob Mackie dresses are a fashion favorite, and with good reason. The legendary Monterey, California–born fashion designer has accrued an enviable list of awards that speak to his unparalleled influence on costumes for screen and theatrical performances: Mackie (b. 1939) has nine Emmy awards to his name, a Tony award, a CFDA Lifetime Achievement Award, three Academy Award nominations and more.

As a child, Mackie was enamored of Portuguese-born Brazilian dancer and actress Carmen Miranda. The love of film shared by his sister and mother proved contagious for Mackie, and he marveled at the richness and beauty he found in ballet. He wasn’t interested in fashion so much as he was in entertainment and went on to fortunately find work in television during the 1960s, specifically in programming that seemed to encompass all of what he’d grown to love about the arts.

As a fashion sketch artist, Mackie collaborated with Hollywood’s greatest costume designers, working with the legendary Edith Head at Paramount Studios as soon as he’d finished school. From there, he secured work with French-born, Hollywood costume designer Jean Louis, sketching the iconic Louis dress worn by Marilyn Monroe when she sang “Happy Birthday, Mr. President” to John F. Kennedy in 1962.

Mackie would spend most of his career as a costume designer, creating iconic pieces like the Gone With the Wind parody costume (currently in the Smithsonian) for The Carol Burnett Show — where he worked for more than a decade — and campy, opulent dresses for The Cher Show on Broadway, for which he won the Tony award. But he had a considerable influence on mainstream fashion as well. The figure-hugging, feathered and fringed gowns and cocktail dresses he designed were worn by stars like Cher and Diana Ross on the red carpet and concert tours. Similar designs of his — dazzling evening dresses of black or vibrant red silk, some beaded with rhinestones or embellished with ostrich feathers or navy blue sequins — made their way into Mackie’s mainstream fashion collection. His ready-to-wear line debuted in 1982.

Bob Mackie has always said that his clothes were “for the woman who is not afraid to be noticed,” and any woman in one of his signature dresses would definitely turn heads. There is sparkle and an element of grandeur in his garments, whether they were crafted for singer Elton John, a universally renowned fashion icon in his own right, or the woman next door, donning one of Mackie’s spectacular creations and feeling like a movie star herself.

Finding the Right Evening Dresses for You

With entire museum exhibitions dedicated to examining fashion designers and their creations, we’re finally recognizing that costuming is art. Fashion is a powerful means of self-expression, and sophisticated evening dresses and gowns by our favorite courtier play no small role in making us feel wonderful but, perhaps more importantly, making us feel like ourselves.

Evening dresses over time have conveyed specific statements about social class, position and beliefs. In the 16th century, dresses and gowns were so important that England's Queen Elizabeth I defined rules about what dresses women could wear -- guidance included long skirts and fitted bodices. Forward-thinking designers have responded to this history.

Gabrielle “Coco” Chanel reimagined traditionally masculine garments for feminine shapes, and her elegant evening dresses and gowns promoted comfort and grace in women’s wear that had been dominated in the previous century by layers of fabric. French fashion designer Yves Saint Laurent introduced innovative and highly coveted dress designs in the 1960s while at the same time challenging sexist stereotypes about which members of society could wear tuxedos. Works by unconventional British designer John Galliano — featured in houses like Givenchy and Dior — redefined limits that dressmakers faced in terms of material, construction and vision during the late 20th century.

Today’s designers target an increasingly broad audience with their boundary-crossing work, and their tendency to play off of each other’s ideas means that every walk down the runway is also a walk through an entire history of fashion design and dress craftsmanship.

Whether you gravitate toward backless maxi dresses or silk charmeuse gowns by Alexander McQueen or embellished, ruffled floral-print designs by Chloe or Versace, there is an extraordinary collection of vintage and designer evening dresses and gowns waiting for you on 1stDibs.