Modernist Steel and Alder Bookshelf, Custom Made by Rehab Vintage

H 69 in. W 60 in. D 15 in.
P.2 Bookshelf
By RCAA
Located in Milan, IT
A striking, captivating play on perspectives and shadows, on gravity and balance, this bookshelf is an innovative design piece of unparalleled charm. Ethereal in its total-white char...
Category

H 77.56 in. W 44.1 in. D 18.9 in.
P.1 Bookshelf
By RCAA
Located in Milan, IT
Part of a series comprised of five vertical modules, this bookshelf features a clean and minimalist aesthetic rendered unique by a singular game of perspectives and shadows, of gravi...
Category 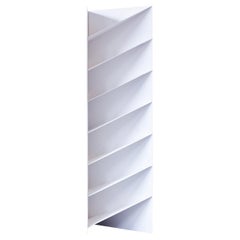 H 77.56 in. W 21.66 in. D 18.51 in.
Willem Lutjes Stokkenkast Bookshelf or Case Made by De Boer Gouda
By Gouda Den Boer, W. Lutjes den Boer Gouda
Located in Oostrum-Venray, NL
A very special bow box from the 60s to 70s. A design by Willem Lutjes and executed by the firm De Boer in Gouda. It got its name from the round sticks that hold the planks of e...
Category

H 29.53 in. W 52.76 in. D 11.82 in.
Float Bookshelf
Located in Brooklyn, NY
Clean-lined, functional, and versatile, the Float bookcase is carefully detailed with 7 floating lacquered shelves and a richly stained oak frame. It is perfect as a room divider or ...
Category

H 83 in. W 60 in. D 16 in.
Roue Bookshelf
By Emmemobili
Located in Milan, IT
Roue bookshelf, from the French word for “wheel”, offers the possibility to play with its elements, in a celebration of the know-how and the craftsmanship of the company, which has a...
Category

H 79.53 in. W 102.37 in. D 21.26 in.
Dolmen Bookshelf
By Héctor Esrawe
Located in Mexico City, CDMX
This bookshelf, made of solid walnut wood, has a base of Monte Negro black marble. The sideboard is from our Dolmen Collection.
Category

H 75.59 in. W 27.55 in. D 47.24 in.
Chinese Bookshelf
Located in Chicago, IL
Chinese scholars, aristocrats, and wealthy merchants collected books and historical objects and placed them in a room dedicated to calligraphy and contemplation. This simple bookshel...
Category

H 89.5 in. W 95.5 in. D 16.5 in.
S_Bookshelf
By Tommaso Garavini
Located in Milan, IT
The S_Bookshelf is the perfect addition to a large luminous loft. With its delicate and organic shapes, it divides spaces without sacrificing elegance and style. This unique piece is...
Category

H 90.56 in. W 51.19 in. D 9.85 in.
Colonial Bookshelf
Located in Paris, FR
Bookshelf Colonial with solid wood structure with smoke eucalyptus veneer in gloss finish, with glass shelves and with mirrored back in side the bookshelf.
Category

H 90.56 in. W 31.5 in. D 13.78 in.
Charm Bookshelf, Solid Wood Perfectly Proportioned Bookshelf
By Mobilia
Located in Houston, TX
Make shelf styling a breeze with this perfectly proportioned console that doubles as a bookshelf. The simple solution to elevating the look of any living or office space.
Category

H 37 in. W 87 in. D 20 in.
Bookshelf Trama 02
Located in Mexico City, CDMX
Designed asymmetrically, the latticework intersects with and is crisscrossed by wooden bolts. The primary wood structure supports a series of randomly, placed interlocking brass ledg...
Category

H 35 in. W 24 in. D 10 in.
Campo Graffi Bookshelf
By Franco Campo & Carlo Graffi
Located in San Francisco, CA
A bookshelf with three sections by Campo Graffi, circa 1950. The bookshelf has a storage area with sliding doors and six shelves made of curved rosewood veneer, all are attached to a...
Category

H 68 in. W 106 in. D 13 in.
Mid-Century Bookshelf
Located in Pasadena, CA
Mid-century bookshelf with adjustable shelves. The cabinet door opens to a bar , a small desk or storage.
Category

H 48 in. W 24 in. D 14 in.
Hand Carved Bookshelf
Located in North Hollywood, CA
Solid teak wood with superb 19th century carvings on the wood columns and on the frames. It is so well made and it will last several decades handcrafted in India, hand carved teak w...
Category

H 82.68 in. W 82.68 in. D 19.69 in.
1960s Scandinavian Teak Bookshelf
Located in Ceglie Messapica, IT
A 1960s Scandinavian book shelf also suitable for kids room. Wood venereed in mahogany and iron structure with brass feet. The fantasy paper is stick on the structure and laquered af...
Category

H 45.5 in. W 26.75 in. D 26.75 in.
Danish Modern Spinning Bookshelf
Located in Brooklyn, NY
This stylish multi-tier bookshelf makes a unique storage piece for any setting. Idea for media storage or shop display, this unique wood finish shelf unit is perfect for home or busi...
Category

H 59.06 in. W 48.43 in. D 13.39 in.
Easy Irony Bookshelf with Boxes
By Zeus Milano
Located in Milan, IT
Covering an entire wall, the Easy Irony bookshelf comes complete with four boxes to provide a sense of movement and help store smaller objects. Thanks to the bookshelf's Minimalist v...
Category

H 70.5 in. W 59.5 in. D 15 in.
Main Street Bookshelf in Solid Walnut
Located in Paris, FR
Bookshelf Main STreet with all structure made in solid walnut. With shelving and oblique 45° load-bearing side panels. Treated with natural wax of vegetable origin with pine extr...
Category

H 78.75 in. W 126.26 in. D 14.18 in.
Mid-Century Modern 4-Tier Walnut Bookshelf
Located in Burbank, CA
Exceptional mid-century 4-tier walnut bookshelf designed and manufactured in the United States, circa 1950s. This bookshelf has an elegant and functional design; it has been built fr...
Category

H 55 in. W 43 in. D 19 in.
Invisible Contemporary Bookshelf by Hyukjoon Choi
Located in London, GB
Invisible began with a concept of ‘what if a furniture is invisible?’. To make the furniture be considered as if it doesn’t exist though it actually exists, a space has been made wi...
Category

H 70.08 in. W 16.93 in. D 11.23 in.
Arthur Milani Solid Bookshelf in Pine
By Milani
Located in Waalwijk, NL
Arthur Milani, bookshelf, solid pine, Swiss, designed in 1947 This solid pine bookcase has a nice simplified yet elegant design. The pine planks on each side become smaller toward...
Category

H 31.11 in. W 34.26 in. D 13.39 in.
Tall French Bobbin Turned Open Bookshelf
Located in Port Chester, NY
A tall bookshelf with eye catching turned supports. A beautiful look and shallow enough to hold paperbacks or art objects without imposing on the space. Quite stable and can stand on...
Category

Scandinavian Wooden Bookshelf from the 1960's

Bookshelf Cases For Sale on 1stDibs

How Much are Bookshelf Cases?

There’s More Than One Way to Arrange Your Home Library

We look at the good, the bad and the weird methods people use to organize their books.