H 50.38 in. W 35.38 in.
Rijks Museum Library - color photography
By Richard Silver
Located in New York, NY
Richard’s love for travel has afforded him many opportunities to shoot different cities and cultures. He loves iconic architecture, whether it’s ancient or modern, and is always foc...
Category

H 25.6 in. W 94.49 in. D 0.12 in.
Exit from the museum of the Vatican - Contemporary Panoramic Color Photography
Located in Brussels, BE
Pigment photographic paper - photography & fine art print © Jean Pierre De Neef Artwork sold in perfect condition - Composition from an assembly of 4 shots made in February 2020. Th...
Category 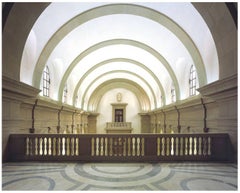 H 13 in. W 62 in.
Basilica, Bode Museum
By Reinhard Görner
Located in Los Angeles, CA
signed and numbered on label, verso Reinhard Görner, with his large format photographs orchestrates the monumentality of historical architecture, gardens, and masterpieces. An act...
Category

H 70 in. W 87.5 in.
Basilica, Bode Museum
By Reinhard Görner
Located in Los Angeles, CA
signed and numbered on label, verso Reinhard Görner, with his large format photographs orchestrates the monumentality of historical architecture, gardens, and masterpieces. An act...
Category

H 19.5 in. W 13.5 in. D .25 in.
Museum Mile, Manhattan Nocturne
By Mitchell Funk
Located in Miami, FL
A movie is being shot on the streets of New York. High power "Klieg Light " blow out the background while street light act as fill. The rain pours down creating a sensual exuberan...
Category

H 63 in. W 39 in. D 1 in.
'Cairo' from the V&A Museum London
Located in London, GB
'Cairo' from the V&A Portfolio Inner portal to the courtyard in the mosque of al-Azhar, Cairo, Egypt, late 19th to early 20th century. © Victoria and Albert Museum, London Paper siz...
Category

Museum Photography For Sale on 1stDibs

On 1stDibs, you can find the most appropriate piece of museum photography for your needs in our varied inventory. In our selection of items, you can find Contemporary examples as well as a Modern version. Making the right choice when shopping for an item from our selection of museum photography may mean carefully reviewing examples of this item dating from different eras — you can find an early iteration of this piece from the 19th Century and a newer version made as recently as the 21st Century. When looking for the right choice in our collection of museum photography for your space, you can search on 1stDibs by color — popular works were created in bold and neutral palettes with elements of gray, black, beige and blue. Creating an object in our assortment of museum photography has been a part of the legacy of many artists, but those crafted by Reinhard Görner, Leslie Schiff, John French, Massimo Listri and Koray Erkaya are consistently popular. Frequently made by artists working in pigment print, archival pigment print and silver gelatin print, these artworks are unique and have attracted attention over the years.

How Much is a Museum Photography?

A piece of museum photography can differ in price owing to various characteristics — the average selling price for items in our inventory is $2,000, while the lowest priced sells for $60 and the highest can go for as much as $38,615.