Pair of Neoclassical armchairs circa 1970 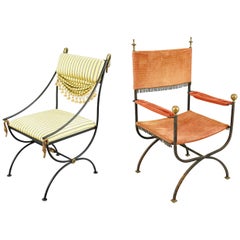 Pair of Neoclassical Armchairs in the Style of André Arbus, circa 1940

H 34.5 in. W 22.5 in. D 18.5 in.
Pair of Swedish Neoclassical Armchairs
Located in Doylestown, PA
A pair of Swedish giltwood Armchairs in the neoclassical manner, late 18th/early 19th Century, with black painted accents, the back and seat upholstered in gold, cream and black silk...
Category

H 35 in. W 24 in. D 24 in.
Pair of French Neoclassical Armchairs
Located in San Francisco, CA
A pair of small walnut armchairs with down cushions. These chairs will most likely need to be re-upholstered. We also have a matching love seat available. France, early 19th century.
Category

H 33.5 in. W 23 in. D 24 in.
Pair of Russian Neoclassic Armchairs
Located in Lambertville, NJ
A pair of Russian parcel-gilt and painted mahogany armchairs in the neoclassic style. Each with scrolling arms and highlighted with paintwork to resemble antique bronze. An exception...
Category

H 37 in. W 23 in. D 24 in.
André Arbus Pair of Ash Wood Neoclassical Armchairs, 1940s
By André Arbus
Located in Paris, FR
These elegant André Arbus armchairs are sure to add an element of French neoclassicism chic to any room in your home. They were designed and produced by André Arbus for the headquart...
Category

H 35.44 in. W 20.48 in. D 22.84 in.
Glimmering Show Stealer Heavy Brass Neoclassical Armchairs by Mastercraft
By Mastercraft
Located in Hopewell, NJ
Stunning pair of neoclassical chairs in heavy brass by Mastercraft having seats of woven brass, stylish backs with a center medallion and arrows piercing through it. Chairs have rece...
Category

H 37.5 in. W 20 in. D 20 in.
André Arbus Pair of Ash Wood Neoclassical Armchairs, 1940s
By André Arbus
Located in Paris, FR
These elegant André Arbus armchairs are sure to add an element of French neoclassicism chic to any room in your home. They were designed and produced by André Arbus for the headquart...
Category

H 35.44 in. W 20.48 in. D 22.84 in.
Transitional Rococo / Neoclassical Armchair in Walnut, Italy, circa 1780
Located in Atlanta, GA
Italian walnut arm chair transitioning from Rococo to neoclassical styles on tapered legs, circa 1780.
Category

H 36 in. W 23 in. D 18.25 in.
Neoclassical Armchair, Cherry Solid Wood with Carvings, France circa 1820
Located in Regensburg, DE
Elegant french Restauration Armchair from about 1820. Cherry solid wood with carvings at the frontside of the armrests depicting vases and flower ranks. Ebonized strip at the top of...
Category

H 39.57 in. W 23.63 in. D 20.28 in.
Rare Pair of Stamped Maison Jansen Louis XV Neoclassical Armchairs, 1940s
By Maison Jansen
Located in Paris, FR
The construction of this pair of armchairs was deeply cared about, and it shows in the finished product, even some eight decades later. The armchairs were made and stamped by French ...
Category

H 35.75 in. W 24.5 in. D 27 in.
Set of Four Italian Neoclassic Silver Gilt Armchairs, Piemontese
Located in Hollywood, FL
Late 18th century neoclassical armchairs. The arched back with fluting over scrolling arms, the frieze of the chair with carved rosettes and square tapering legs, all in silver gilt.
Category

H 36 in. W 26 in. D 28 in.
Vintage Neoclassical Club Chair
Located in Great Barrington, MA
The vintage neoclassical armchair is newly upholstered in beige linen and has paneled legs and frame painted gold and white. Brass nailheads secure the upholstery. The seat is extra ...
Category

H 31 in. W 28 in. D 34.5 in.
Vintage Neoclassical Club Chair
Located in Great Barrington, MA
The vintage neoclassical armchair is newly upholstered in beige linen and has panelled legs and frame painted gold and white. Brass nailheads secure the upholstery. The seat is extra...
Category

H 31 in. W 28 in. D 34.5 in.
Pair of Hand Carved Gilt Wood Arm Chars by Galimberti Lino, Italy
By Galimberti Lino
Located in Lambertville, NJ
An elegant pair of hand craved neoclassical armchairs with gilt decoration. Made in Italy by Galimberti Lino. The back and arms with a dolphin motif with gilt trim all around the fra...
Category

H 36.25 in. W 22 in. D 20.5 in.
Pair of Italian Neoclassic Walnut Armchairs
Located in Essex, MA
Arched back and downswept arms raised on circular tapered stop fluted legs. Nicely molded and carved frame with detachable seat and back for easy reupholstery.
Category

H 34.25 in. W 22 in. D 24.25 in.
Pair of Italian Neoclassic Walnut Armchairs
Located in Essex, MA
Each with serpentine crest rail with central circular carving over an upholstered back and feat, raised on square tapered legs.
Category

Neoclassical Giltwood and Velvet Armchair, circa 1950

H 37 in. W 20 in. D 25 in.
Antique Pair of Neoclassic Style Armchairs, Italy
Located in Atlanta, GA
An Italian pair of Neoclassical style armchairs from the early 20th century. This antique pair of accent chairs from Italy are each carved with neoclassic stylings with clean/linear ...
Category

H 37 in. W 23 in. D 19 in.
Get Updated with New Arrivals
Save "Neoclassical Armchairs 4", and we’ll notify you when there are new listings in this category.

Neoclassical Armchairs 4 For Sale on 1stDibs

How Much is a Neoclassical Armchairs 4?

Prices for a neoclassical armchairs 4 can differ depending upon size, time period and other attributes — at 1stDibs, they begin at $1 and can go as high as $145,000, while the average can fetch as much as $4,418.

Armchairs have run the gamut from prestige to ease and everything in between, and everyone has a specific antique, new or vintage armchair or two that they love.

When placed under just the right lamp where you can lounge comfortably, both elbows resting on the padded supports on each side of you, an upholstered armchair — or a rattan armchair for your light-suffused sunroom — can be the sanctuary where you’ll read for hours.

If you’re in the mood for company, your velvet chesterfield armchair is a place to relax and be part of the conversation that swirls around you. Maybe the dialogue is about the beloved Papa Bear chair, a mid-century modern masterpiece from Danish carpenter and furniture maker Hans Wegner, and the wingback’s strong association with the concept of cozying up by the fireplace, which we can trace back to its origins in 1600s-era England, when the seat’s distinctive arm protrusions protected the sitter from the heat of the period’s large fireplaces.

Everyone seems to have a favorite armchair and most people will be all too willing to talk about their beloved design. Whether that’s the unique Favela chair by Brazilian sibling furniture designers Fernando and Humberto Campana, who repurpose everyday objects to provocative effect; or Marcel Breuer’s futuristic tubular metal Wassily lounge chair; the functionality-first LC series from Charlotte Perriand, Le Corbusier and Pierre Jeanneret; or the Eames lounge chair of the mid-1950s created by Charles and Ray Eames, there is an iconic armchair for everyone and every purpose. Find yours on 1stDibs right now.

Who knew aluminum could be so sexy?