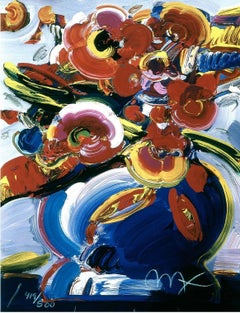 H 6 in. W 12 in.
FLOWER VASE
By Peter Max
Located in Aventura, FL
Original painting on canvas. Hand signed and dated on front by the artist. Stretched. Artwork is in excellent condition. Certificate of Authenticity included. All reasonable off...
Category

H 20 in. W 16 in.
FLOWER VASE
By Peter Max
Located in Aventura, FL
Original mixed media and watercolor on paper. Hand signed on front by the artist. Artwork is in excellent condition. Certificate of Authenticity included. All reasonable offers wi...
Category 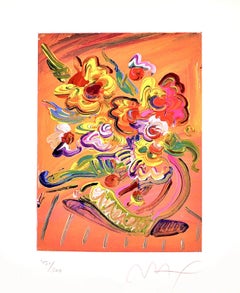 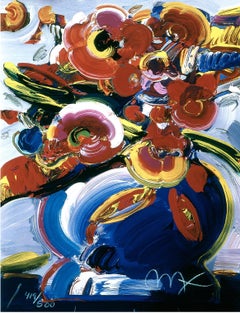 H 30 in. W 36 in.
PETER MAX Original PAINTING POP ART PROFILE Watercolor SIGNED VASE of FLOWERS
By Peter Max
Located in Bloomington, MN
This is an Authentic All-Original Peter Max Ink, Pastel, and, Watercolor Painting titled, "Original Profiles with Vase of Flowers" created by Max in 1989.... The piece is an Authent...
Category

H 30 in. W 22 in.
VASE OF FLOWERS SERIES 17 VER. IV #1
By Peter Max
Located in Aventura, FL
Original painting on canvas. Hand signed on front by the artist. Studio stamp on verso. Artwork is in excellent condition. Peter Max Studio Certificate of Authenticity included. A...
Category

H 48 in. W 36 in.
VASE OF FLOWERS SERIES 80 VER. III #1
By Peter Max
Located in Aventura, FL
Original painting on canvas. Hand signed on front by the artist. Studio stamp on verso. Artwork is in excellent condition. Peter Max Studio Certificate of Authenticity included. A...
Category

H 34 in. W 31 in.
PETER MAX Original Signed PAINTING Abstract VASE OF FLOWERS Pop ART Acrylic Oil
By Peter Max
Located in Bloomington, MN
This is by far one of our personal favorites. This is a Truly Spectacular (Both the frame, and, piece are in like NEW Condition) PETER MAX painting titled "POP ART FLOWERS 98" offer...
Category

H 22 in. W 19 in.
PETER MAX Original Signed PAINTING Abstract VASE OF FLOWERS Pop ART Acrylic Oil
By Peter Max
Located in Bloomington, MN
This is by far one of our personal favorites. This is a Truly Spectacular (Both the frame, and, piece are in like NEW Condition) PETER MAX painting titled "POP ART FLOWERS" offered ...
Category

H 24 in. W 20 in.
PETER MAX Acrylic PAINTING on CANVAS All ORIGINAL Signed VASE OF FLOWERS Art oil
By Peter Max
Located in Bloomington, MN
This is by far one of the Nicest PETER MAX Original Acrylic on Canvas Paintings that we have Ever Been able to Offer For Sale... This is an ALL-ORIGINAL Authentic Peter Max "ORIGI...
Category

H 24 in. W 18 in.
Vase of Flowers, 1979 Limited Edition Lithograph, Peter Max
By Peter Max
Located in Mount Clemens, MI
PETER MAX (1937- ) Peter Max has achieved huge success and world-wide recognition for his artistic accomplishments as a multi-dimensional artist. From visionary Pop artist of the 19...
Category

H 11 in. W 9 in.
Flowers in a Blue Vase II #1
By Peter Max
Located in Rancho Santa Fe, CA
This is piece is in great condition and is an acrylic painting on serigraph. Please excuse the poor photos with the reflection of the plexiglass. This item is located in our New Yor...
Category

H 48 in. W 38.5 in. D 1 in.
Vase of Flowers Hand Colored Modern Abstract Lithograph
By Peter Max
Located in Houston, TX
Colorful hand-painted still life lithograph of a vase with flowers. The work is signed by the artist and editioned 20 of 50. The print is framed in a black frame with a black matte. ...
Category

H 36 in. W 35 in. D 2 in.
PETER MAX Original Signed PAINTING VASE OF FLOWERS Art Acrylic Still Life LARGE
By Peter Max
Located in Bloomington, MN
This is by far one of our personal favorites. This is a Truly Spectacular (Both the frame, and, piece are in like NEW Condition) Large PETER MAX painting titled "VASE OF FLOWERS" of...
Category

How Much is a Peter Max Flower Vase?

The price for an artwork of this kind can differ depending upon size, time period and other attributes — a peter max flower vase in our inventory may begin at $425 and can go as high as $45,000, while the average can fetch as much as $2,595.