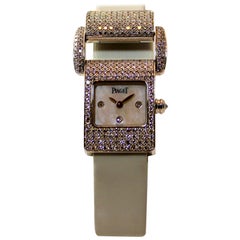 Piaget Diamond Watch
By Piaget
Located in New Orleans, LA
This glamorous ladies' watch from celebrated horologist Piaget epitomizes the fine craftsmanship the company has been renown for since 1874. Featuring a dial set with 182 round brill...
Category

Piaget Polo Watch GOA36023
By Piaget
Located in Southampton, PA
The Piaget Polo Watch, reference number GOA36023, is a timeless accessory that is as opulent as it is sophisticated. A 40mm case and bracelet crafted from lustrous 18K Yellow Gold ...
Category

Free Shipping
L 6 in.
Piaget Diamond and Emerald Ladies Watch
By Piaget
Located in Southampton, PA
Time is precious and this luxury watch will remind you of that, literally and figuratively. This diamond and emerald timepiece from Piaget features an oval dial completely covered in...
Category

Free Shipping
L 6 in.
Vintage Piaget Jade Dial 18k Gold Ref 9802 Watch
By Piaget
Located in Miami, FL
This Vintage Piaget 18K Gold Two Tone Woven Watch is perfect for someone who loves the Jade and the current trending retro fashions. The watch band is 15 mm wide and is crafted in 1...
Category

Surely you’ll find the exact piaget gold watch you’re seeking on 1stDibs — we’ve got a vast assortment for sale. Frequently made of Gold, 18k Gold and Yellow Gold, this item was constructed with great care. In our selection of items, you can find a vintage example as well as a contemporary version. Finding the perfect piaget gold watch may mean sifting through those created during different time periods — you can find an early version that dates to the 19th Century and a newer variation that were made as recently as the 21st Century. For this particular piece, .5 Carat and 1 Carat are consistently popular carat weights. A piaget gold watch can be a stylish choice for most occasions, but Diamond rings, from our inventory of 302, can add a particularly distinctive touch to your look, day or night. See these pages for a round cut iteration of this accessory, while there are also brilliant cut cut and marquise cut cut versions available here, too. If you’re browsing our inventory for a piaget gold watch, you’ll find that many are available today for women, but there are still pieces to choose from for unisex and men.

How Much is a Piaget Gold Watch?

Finding the Right Watches for You

Records show that, in Europe, by the 16th century, it was high time for portable clock devices. Right now, perhaps you’re shopping for your own. If so, find a vast range of fashionable and functional antique, new and classic vintage watches on 1stDibs.

While wall-mounted time tellers and grandfather clocks were much more convenient than the sundials of ancient history, watches were becoming crucial for an increasingly connected society whose members learned that the latest advancements in technology meant they could carry devices that kept time to within a minute a day. Tragically, the first pocket watches — albeit an improvement on the accessories that preceded them, which dangled from a chain worn around the neck — didn’t help much as far as accuracy or portability. Focused on style over substance, the upper class frequently carried lavish pieces that ran hours behind.

Eventually, watches migrated from owners’ pockets to their wrists. In the early days of watchmaking, watches were fragile enough that they necessitated protection from the elements. Now, watches made of gold and steel can withstand the harshest climates — even 100 meters underwater, in the case of Rolex’s Submariner.

Indeed, although exceedingly practical, the watches of today are far from bland. Bvlgari’s iconic Serpenti watch was on everyone’s list after the collection’s bold bracelet, which technically debuted after the timepiece, graced the wrist of actress Elizabeth Taylor. If anything, elaborately crafted timepieces — the unmistakably boxy silhouette of Cartier Tank watches, the elegant and minimal Calatrava designed by legendary Swiss house Patek Philippe — are even more effective than the shape we associate with traditional watches. You’ll always know what time it is because you won’t be able to tear your eyes away from your new accessory.

Form watches — the all-encompassing moniker bestowed upon non-round watches — are making headlines and completing contemporary fashionable ensembles the world over. At the same time, both casual fans and careful collectors are drawn to the unbeatable charm of vintage styles, such as the icons designed by Omega that even James Bond can’t resist.

When shopping for a watch, it’s good to keep your needs as well as your specific personal style in mind: A smaller, subtle timepiece is a good fit for small wrists. When will you be wearing your new accessory? There’s a versatile model out there for everyday wear, while a rugged, feature-heavy watch is a safe bet if you’re prone to embarking on all-weather activities in the great outdoors.

Find exactly what you’re looking for in an unparalleled collection of antique, new and vintage watches on 1stDibs — we promise it will be worth your time.