H 9.85 in. W 2.37 in. D 0.99 in.
French Christofle Silver Plated Galea, a Pair of Serving Fork and Spoon, New
By Christofle
Located in Petaluma, CA
This is a beautiful French silver plated Christofle pair of serving fork and spoon. They have never been used, new, in their original wrapped plastic and box. The model is Galea. ...
Category

H 9.85 in. W 1.19 in. D 0.6 in.
Christofle Set of 2 Silver Plated Salad Serving Spoon and Fork Perles New in Box
By Christofle
Located in Petaluma, CA
This French Christofle silver plated set is the Perles design and consists of one salad serving spoon and one serving fork. Both serving utensils are new and in their original boxes....
Category

H 9.85 in. W 1.78 in. D 0.4 in.
Victorian Serving Fork
Located in Stamford, CT
Victorian serving fork in Silver Plate, circa 1890. Made in England. Please note of wear consistent with age.
Category 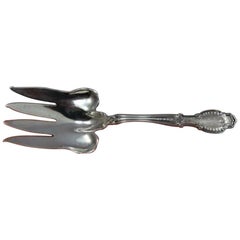 H 1 in. W 1 in. D 1 in.
El Grandee Serving Fork
By Towle Silversmiths
Located in Brooklyn, NY
You can never have too many serving pieces! Here’s a delightful serving fork in the El Grandee pattern. A scalloped handle with flowers and four cut-outs; two at the tip and the othe...
Category

H 1 in. W 1 in. D 1 in.
Francis I Sterling Serving Fork
By Reed & Barton
Located in Brooklyn, NY
We are offering this sterling silver serving fork In the Francis I pattern by Reed and Barton. Francis I is R&B’s most famous pattern; it has always been a favorite among silver coll...
Category

H 1 in. W 1 in. D 1 in.
Persian by Tiffany & Co. Sterling Silver Salad Serving Fork GW
By Tiffany & Co.
Located in Big Bend, WI
Sterling silver salad serving fork gold washed fluted 10 1/4" in the pattern Persian by Tiffany. It is not monogrammed and is in excellent condition. Satisfaction guaranteed!
Category

H 1 in. W 1 in. D 1 in.
Broom Corn by Tiffany & Co Sterling Silver BBQ Serving Fork Custom Made
By Tiffany & Co.
Located in Big Bend, WI
Sterling silver custom made hot bbq beef serving fork with splayed tines, 7 1/2", in the pattern broom corn by Tiffany & Co. It is not monogrammed and is in excellent condition. This...
Category

H 1 in. W 1 in. D 1 in.
Persian by Tiffany and Co Sterling Silver BBQ Serving Fork Custom Made
By Tiffany & Co.
Located in Big Bend, WI
Sterling silver custom made Hot BBQ beef serving fork with splayed tines, 8", in the pattern Persian by Tiffany & Co. It is not monogrammed and is in excellent condition. This all-st...
Category

H 10.37 in. W 1 in. D 0.18 in.
English King by Tiffany Sterling Silver Asparagus Serving Fork Round Tine
By Tiffany & Co.
Located in Big Bend, WI
Sterling silver asparagus serving fork with round tines 9 1/2" in the pattern English King by Tiffany. It is monogrammed ""KJR"" (see photo) and is in excellent condition. Satisfa...
Category

Icelandic Serving Fork in Sterling Silver from J & B

Serving Fork For Sale on 1stDibs

Choose from an assortment of styles, material and more with respect to the serving fork you’re looking for at 1stDibs. A serving fork — often made from metal, silver and sterling silver — can elevate any home. Find 1118 options for an antique or vintage serving fork now, or shop our selection of 15 modern versions for a more contemporary example of this long-cherished piece. Whether you’re looking for an older or newer serving fork, there are earlier versions available from the 18th Century and newer variations made as recently as the 21st Century. A serving fork is a generally popular piece of furniture, but those created in Art Nouveau, Art Deco and Mid-Century Modern styles are sought with frequency. Many designers have produced at least one well-made serving fork over the years, but those crafted by Tiffany & Co., Georg Jensen and Gorham are often thought to be among the most beautiful.

How Much is a Serving Fork?

Prices for a serving fork can differ depending upon size, time period and other attributes — at 1stDibs, they begin at $39 and can go as high as $7,805, while the average can fetch as much as $189.