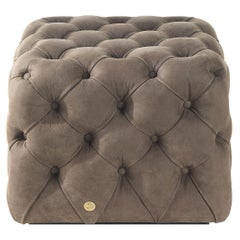 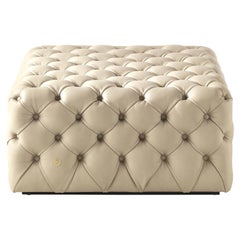 H 15.75 in. W 31.5 in. D 31.5 in.
Square Pouf
By Il Paralume Marina
Located in Milan, IT
This stunning pouf will make a statement in a contemporary or modern decor, thanks to its elegant color combination, its contrasting textures, and the geometric structure of its silh...
Category

H 18.9 in. W 20.48 in. D 22.05 in.
Kajal Square Pouf
By Tura
Located in Milan, IT
Sophisticated and stylish, the Square Kajal Pouf features a sturdy wooden base covered with matte natural colored parchment and is beautifully complimented by the padded seat upholst...
Category 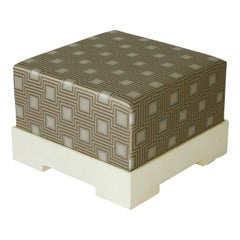 H 14.97 in. W 21.66 in. D 21.66 in.
Beije Kajal Square Pouf
By Tura
Located in Milan, IT
The stylish square Kajal pouf features a sturdy wooden base that is covered with matte natural colored parchment and beautifully complimented by the padded seat upholstered in an ele...
Category 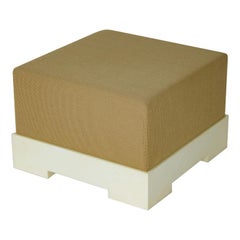 Pair of Square Brass and Leather Ottomans by Lawson-Fenning

Pair of Mid-century Ottomans in White Leather on Squared Legs

H 16 in. W 27 in. D 27 in.
Square Stitched-Leather Pouf
Located in Los Angeles, CA
A wonderful and unusual square pouf in brown leather. An impressive, heavily and well-built piece of perfectly broken-in brown leather adorned with a decorative, whip-stitched "X" at...
Category

H 12 in. W 25.5 in. D 25.5 in.
Large Moroccan Leather Square Pouf
Located in North Hollywood, CA
Large Moroccan square leather pouf, hand-crafted in dark brown camel leather. This ottoman is filled with foam, use it as a footstool or nice accent piece.
Category

H 16 in. W 37 in. D 37 in.
Stitched Caramel Leather Square Ottoman Pouf Footstool, 20th Century
Located in Shippensburg, PA
This is a gorgeous and most comfortable little accent, crafted out of thick and luxuriously soft brown saddle leather with a deeply stuffed interior. The warm leather retains a beaut...
Category

H 15 in. D 18 in.
Victorian Square Leather and Mahogany Ottoman
Located in Salisbury, Wiltshire
Victorian square leather and mahogany ottoman Here we have lovely ottoman of near square form, made in the Victorian period, circa 1870 We have refinished it and covered it in fine...
Category

How Much is a Square Leather Ottoman?

Finding the Right Ottomans and Poufs for You

Antique and vintage ottomans and poufs add comfort and style to any living room, game room, home office or minimalist lounge space. An ottoman is a short seat or footstool that is also often used to store items. A pouf is similar, but it’s typically more petite than an ottoman, usually without the storage space inside.

When one thinks of the Ottoman Empire, it’s easy to overlook the iconic seat named for the region. The ottoman — originally an upholstered seat or small bench without a back or arms — was a family’s main seating furniture, a way to merge floor seating with cushions and mats. It wasn’t until they were brought to Europe from Turkey, during the 18th century, that it became popular to join ottomans with other pieces of furniture, such as at the base of a chair. Eventually, these footrests were transformed into storage furnishings to organize quilts and blankets or other textiles. Furniture makers crafted their ottomans with lids that revealed a hidden cupboard, which rendered them both comfortable and practical.

Poufs, which appeared in France during the 1840s, are also of the low-platform seating variety. These versatile furnishings have been made available in all manner of shapes and sizes over time, and depending upon their firmness can be used as a side table should an occasion call for an extra one. However, your average ottoman is almost always firmer than a pouf, and even if the plush pouf in your living room feels sturdy, it’s probably not the best surface for your early-evening cocktail.

Both ottomans and poufs can help create an inviting and warm atmosphere in your living space. For the smaller rooms that are characterized by a casual feel, a shaggy or woven wool pouf might be a better choice, as it’s likely to be more compact and floor-cushion-like than an ottoman. The latter are often larger and more table-like and are comparatively a good fit for a more formal room such as a library or a study. Today, you might find that an ottoman works well in your bedroom, where there isn’t room for a sofa, or perhaps it can serve as a reliable perch in front of your vintage vanity table.

Whatever your seating needs are, find a collection of antique, new and vintage ottomans and poufs in varying styles on 1stDibs that include neoclassical, Industrial and mid-century modern. From the bright colors and bold patterns deployed by Milan-born designer Lorenza Bozzoli to the classy leather furnishings created at family-run Brooklyn, New York, atelier Moses Nadel, there is an endless range of these lovable low stools that merge seamlessly with most decor.