Price
Item Location
Sort By
Slim and Sphinx - Slim Aarons, 20th century, Photography, Nightclub, Dancing
By Slim Aarons
Located in Brighton, GB
Please bear in mind that all prints are produced to order. Lead times are expected between 15-20 days. Currency fluctuations may cause the price to change. Prices listed include VAT...
Category

H 16 in. W 20 in. D 0.1 in.
Times Square in the 1960s - Portrait with Dancing Sign - Street Photography
By Mitchell Funk
Located in Miami, FL
Even at the age of 19, street photographer Mitchell Funk forged a unique style of street color photography. It was based on formal and exacting compositions with an emphasis on stron...
Category

H 29 in. W 43 in.
London Dancing
By Bert Hardy
Located in London, GB
Soldiers and civilians having dinner and dancing in a night club in London during World War II, 1st November 1941. Original Publication: Picture Post – PP 917 – The Night Life of Lon...
Category 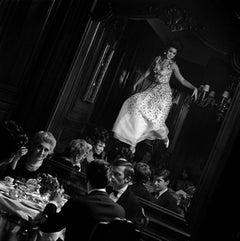 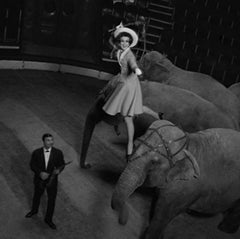 H 20 in. W 16 in.
Cancan Dancers
By Weegee
Located in Brooklyn, NY
Arthur Fellig, known by his pseudonym Weegee, was a photographer and photojournalist, known for his stark black and white street photography in New York City. Silver gelatin print
Category 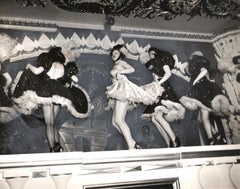 H 7.5 in. W 9.5 in.
Dance Study 1117
By Howard Schatz
Located in Lawrence, NY
# 1 of 8 Signed, dated and numbered Howard Schatz gave up a career as a retinal surgeon and a clinical professor to follow his passion for photography. Schatz first established a fo...
Category

H 9 in. W 13 in.
Men Dancing, Migdal Torah, Chicago
By Jay Wolke
Located in Surfside, FL
Jay Wolke lives and works in Chicago, Illinois. He has had solo exhibitions at the Art Institute of Chicago, the St. Louis Art Museum, Harvard University, the California Museum of Ph...
Category

H 20 in. W 24 in.
Photograph of Three Dancers
By Andy Warhol
Located in Los Angeles, CA
Image dimensions: 10 x 8 in. Framed dimensions: 18.125 x 16.625 in. Stamped on verso by the Estate of Andy Warhol and The Andy Warhol Foundation for the Visual Arts. Foundation inven...
Category

H 10 in. W 8 in.
Traditional Indian dance mask, Nicaragua
By Susan Meiselas
Located in New York, NY
This photograph is an edition of 3 and is signed by the photographer. Susan Meiselas was born in Maryland. After teaching photography at New York public schools, her photographs o...
Category

H 40 in. W 30 in.
Fantasy on the Dance Floor, Barbara Mullen, Paris
By Lillian Bassman
Located in Santa Monica, CA
signed and numbered in pencil on verso
Category

H 11 in. W 14 in. D .03 in.
Vicky West Dancing the Cancan with My Daughters, Cori and Julia, Bridgehampton
By Mariette Pathy Allen
Located in New York, NY
Signed and numbered, verso Edition of 15 This work is offered by ClampArt in New York City.
Category

H 17.33 in. W 22.05 in. D 0.04 in.
Tina Chow Dancing
By Andy Warhol
Located in Los Angeles, CA
This is a unique work. Stamped on verso by The Estate of Andy Warhol and The Andy Warhol Foundation for the Visual Arts. Annotated with Foundation inventory number. The work comes wi...
Category

H 19 in. W 13 in.
Get Updated with New Arrivals
Save "Vintage Dance Photography", and we’ll notify you when there are new listings in this category.

Surely you’ll find the exact piece of vintage dance photography you’re seeking on 1stDibs — we’ve got a vast assortment for sale. Find Modern versions now, or shop for Modern creations for a more modern example of these cherished works. Finding the perfect item from our selection of vintage dance photography may mean sifting through those created during different time periods — you can find an early version that dates to the 20th Century and a newer variation that were made as recently as the 20th Century. Adding a choice in our collection of vintage dance photography to a room that is mostly decorated in warm neutral tones can yield a welcome change — find a piece on 1stDibs that incorporates elements of black, gray, purple, brown and more. There have been many interesting object in our assortment of vintage dance photography examples over the years, but those made by Jack Mitchell, Allan Tannenbaum, Nicholas Taylor, Howard Schatz and Stefanie Schneider are often thought to be among the most thought-provoking. Artworks like these — often created in silver gelatin print, archival pigment print and pigment print — can elevate any room of your home.

How Much is a Vintage Dance Photography?

The price for an artwork of this kind can differ depending upon size, time period and other attributes — a piece of vintage dance photography in our inventory may begin at $100 and can go as high as $95,000, while the average can fetch as much as $1,750.