H 40.56 in. W 31.11 in. D 35.04 in.
Margaritas Lounge Chair
Located in Milan, IT
A stunning exercise in contrast, this lounge chair is an ideal addition to a private study, living room or bedroom, where it will imbue sophistication and timeless charm to any inter...
Category 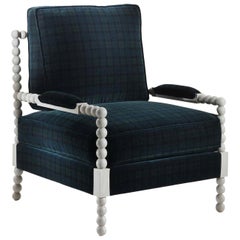 H 40.56 in. W 31.11 in. D 35.04 in.
Madama Lounge chair
Located in Milan, IT
An ideal piece to lounge with a good book or enjoy the company of friends and family after dinner, this armchair features a stunning combination of comfort and elegant design. The st...
Category

H 29.14 in. W 35.44 in. D 37.01 in.
Leather Chaise Lounge
Located in Los Angeles, CA
A modern tufted chaise lounge crafted out of leather in great condition and has been completed restored, this fabulous chesterfield leather daybed features a tufted design and the ba...
Category

H 40 in. W 28 in. D 38 in.
Midcentury Lounge Chair
Located in Brooklyn, NY
Stylish midcentury lounge chair with wooden tips on the arms. Tapered and splayed legs support a wide and comfortable seating area. Sure to compliment any modern interior. Please con...
Category

H 39 in. W 31.75 in. D 31.5 in.
SW2 Lounge Armchair
Located in Milan, IT
This lounge chair exudes elegant charm and timeless sophistication, thanks to the combination of a geometric structure in wood with a matte black finish supporting cut-out cushions u...
Category

H 27.56 in. W 24.81 in. D 16.54 in.
Madama Lounge chair
Located in Milan, IT
This playful and modern object of functional decor is a cozy piece to add to a private study or bedroom, where it will invite relaxation and be an eye-catching accent piece. With its...
Category

H 38 in. W 30 in. D 36 in.
Wave Chaise Longue
Located in Milan, IT
This chaise longue is a modern and elegant piece of outdoor functional decor. The structure is made of varnished steel, which is resistant to water, saltiness, and chlorine, and a Te...
Category

H 31.5 in. W 38.5 in. D 22 in.
Paris Chaise Longue
By Chelini
Located in Milan, IT
Add a romantic touch to your lounge or bedroom with the Paris Chaise Longue, reinterpreting a traditional style with a modern twist. Its solid wood base sets the tone, characterised ...
Category

H 25.6 in. W 66.93 in. D 35.44 in.
Enjoy Chaise Longue
By Zanaboni Edizioni
Located in Milan, IT
This chaise longue is an example of masterful craftsmanship combining various techniques and materials into a refined and sophisticated piece of functional decor. Boasting an elegant...
Category

H 32.29 in. W 66.15 in. D 27.56 in.
Chika Lounge Armchair
By Da A
Located in Milan, IT
Boasting a unique, funnel-shaped silhouette, this splendid lounge armchair will be a statement piece in any indoor or outdoor contemporary decor. Five hundred meters of black technic...
Category

H 32.29 in. W 46.07 in. D 39.38 in.
Philip Chaise Lounge
By Chelini
Located in Milan, IT
This comfortable, stylish chaise lounge makes a striking addition to any environment. It stands upon satin brass feet and is covered in soft, gray fabric. Its one-armed look is sleek...
Category

H 28 in. W 33.5 in. D 66.5 in.
Cayenne Lounge Chair
By Marie Burgos Design
Located in New York, NY
The Cayenne lounge chair is a deft homage to midcentury design. Designer Marie Burgos has taken the clean lines that defined seating designs of that era and given them a luxurious ne...
Category

H 29 in. W 66 in. D 26 in.
Kyoto Lounge Chair
By Livoni
Located in Milan, IT
Retro shapes meet with contemporary styling in the Kyoto lounge chair. On solid beechwood legs with Mid-Century Modern inspiration, the chair's back curves around the sides to comple...
Category

H 28 in. W 36 in. D 28 in.
Shark Chaise Lounge
Located in Milan, IT
An exquisite contemporary interpretation of the archetypical convertible seat, this chaise longue boasts a versatile and extremely functional personality in a minimalist look. Comfor...
Category

H 29.93 in. W 27.56 in. D 51.19 in.
Kim Lounge Chair
By Bodema
Located in Milan, IT
Simple and sophisticated, this lounge chair features a square and compact seat that opens up in the backrest with a delicate curvature that invites to relax. The cylindrical beechwoo...
Category

H 29.53 in. W 26.78 in. D 30.71 in.
GT Lounge Chair
By Gubi, Greta Magnusson-Grossman
Located in Berkeley, CA
The GT lounge chair was designed by Greta M. Grossman in 1949 and with its sleek and feminine lines, it beautifully expresses the influence that Scandinavian design had on her. Desig...
Category

H 27.5 in. W 25 in. D 27.5 in.
Caden Lounge Chair
By Jillian O'Neill
Located in Houston, TX
Our refined Caden lounge chair adds elegance to any space. Set two in front of a fireplace, another pair at the end of your bed, or they'll sit perfectly with your living room sofa. ...
Category

H 32 in. W 32 in. D 33 in.
Sol Chaise Longue
By Da A
Located in Milan, IT
A clean and essential design, this stunning chaise longue exudes extreme comfort and relaxation. A combination of high-tech materials, its structure is fashioned of bent cylindrical ...
Category

H 31.5 in. W 37.41 in. D 63 in.
Hen Lounge Armchair
By Da A
Located in Milan, IT
A striking object of sculptural allure, this lounge armchair will make a statement in both an indoor and outdoor area, infusing it with contemporary sophistication. Boasting an eclec...
Category

H 34.65 in. W 36.62 in. D 29.53 in.
Lounge Dune Chair
Located in Paris, FR
Seat sofa that draws inspiration from the aesthetics of Mid-Century Modern design. Upholstered in velvet and stitched from the top to the bottom. Brass and gold plated base .T He ...
Category

H 31.11 in. W 26.78 in. D 34.26 in.
Bilge Lounge Chair
Located in Brooklyn, NY
The Bilge lounge chair is made from reclaimed bourbon barrel staves from Kentucky and recycled leaf springs from New York City fire trucks. First, the natural char of the staves is s...
Category

H 33.5 in. W 105 in. D 48 in.
Marlen Lounge, made in italy, contract, indoor, lounge, red
By EP Studio
Located in MARANO VICENTINO, IT
Comfort, an ergonomic shape and a hardy structure are the characteristics of the Marlen design, the new Trabà chair designed by EP Studio. Hints of a 1950s vibe can be glimpsed in...
Category

H 26.78 in. W 22.45 in. D 21.66 in.
Marlen Lounge, Made in Italy, Contract, Indoor, Lounge, Green
By EP Studio
Located in MARANO VICENTINO, IT
Comfort, an ergonomic shape and a hardy structure are the characteristics of the Marlen design, the new Trabà chair designed by EP Studio. Hints of a 1950s vibe can be glimpsed in...
Category

H 27.5 in. W 33.5 in. D 25.5 in.
GMG Chaise Longue
By Gubi, Greta Magnusson-Grossman
Located in Berkeley, CA
The GMG Chaise Longue was designed in 1951 by Greta M. Grossman and with playful elegance it is perfectly angled for lounging whilst preserving all the streamlined qualities of a mid...
Category

H 32.5 in. W 58.25 in. D 25 in.
Neoclassic Lounge Chair
Located in New York, NY
Gustavian inspired armchair, with exuberantly carved front stretcher, reflected in the curved seat rails and back slats. Recently upholstered , with a padded seat and loose seat and ...
Category

H 34 in. W 23.5 in. D 28.5 in.
Postmodern Lounge Chair
By Dieter Rams
Located in Villeurbanne, Rhone Alpes
A curvaceous lounge chair from the 1980s offering 3 seating positions. Shell made out of one single piece of bent, laminated plywood, lacquered in white. The base is in the shape o...
Category

H 26 in. W 34.125 in. D 30.5 in.
Aplomb Chaise Longue
By Ivano Redaelli 1
Located in Milan, IT
With an elegant, yet sturdy design the Aplomb chaise lounge is the perfect accessory for your living area, lounge room or bedroom. The frame is crafted from solid ashwood stained in ...
Category

H 31.5 in. W 309.06 in. D 38.59 in.
Tessera Lounge Chair
By Marc Baroud
Located in London, United Kingdom
Tessera in Latin is the individual tile, usually formed in the shape of a cube used in creating mosaics. It is also number 4 in Greek. Tessera is a handcrafted line of products built...
Category

H 32.5 in. W 29.5 in. D 35 in.
Minimalist Outdoor Wire Lounge Chair, the Bunny Lounge in Orange
By Bend Goods
Located in Los Angeles, CA
Bend Goods wire furniture The bunny lounge is a wire lounge chair with a deep scoop shape for a relaxed lounging experience. The subtly curved design compliments any indoor or outdo...
Category

H 29 in. W 24 in. D 16 in.
Wire Lounge Chair
By Overgaard & Dyrman
Located in Los Angeles, CA
The wire collection finds inspiration in traditional saddlery and metal work, and challenges the synergy and contrast in the use of materials. The honesty in genuine materials and th...
Category

H 30.5 in. W 24 in. D 29 in.
Rea Chaise Lounge, Left
By Arcahorn Srl.
Located in Milan, IT
A magnificent complement to the Rea sofa, this left-sided chaise lounge is a stunning addition to a living room or study, infusing a modern home with a luxurious flair. The curved si...
Category

H 32 in. W 36 in. D 65 in.
Jens Risom Lounge Chair
By Jens Risom, Knoll
Located in Los Angeles, CA
Lounge chair by Jens Risom for Knoll, circa late 1940s. This 1943 design was Risom's first design for Knoll, where he had been brought on as design director. Because of the scarcity ...
Category

Z Lounge For Sale on 1stDibs

Choose from an assortment of styles, material and more with respect to the z lounge you’re looking for at 1stDibs. Frequently made of wood, fabric and metal, every z lounge was constructed with great care. There are 10037 variations of the antique or vintage z lounge you’re looking for, while we also have 1648 modern editions of this piece to choose from as well. There are many kinds of the z lounge you’re looking for, from those produced as long ago as the 18th Century to those made as recently as the 21st Century. When you’re browsing for the right z lounge, those designed in Mid-Century Modern, Scandinavian Modern and Modern styles are of considerable interest. You’ll likely find more than one z lounge that is appealing in its simplicity, but Hans J. Wegner, Milo Baughman and Knoll produced versions that are worth a look.

How Much are Z Lounge?

A z lounge can differ in price owing to various characteristics — the average selling price 1stDibs is $4,500, while the lowest priced sells for $257 and the highest can go for as much as $189,195.