Nina Bentley was born in Brooklyn and raised in Great Neck, New York. In 1962 she graduated from the University of Wisconsin-Madison with a degree in English, later studying art at the Brooklyn Museum Art School and Chelsea College of Arts, London. Married young, she moved around the world with her husband, then an international banker, living in Bologna, Frankfurt, London, Zurich, Santiago and Caracas. A mother of three, her view of life has been molded by “a lifetime of changing roles-wife, mother, copywriter, window designer, art center director.” Bentley began exhibiting in 1965 and has enjoyed numerous solo exhibitions, here and abroad, since 1978. An inveterate collector of stuff, Bentley makes art from anything and everything. She deliberately juxtaposes objects whose scale, textures, or categories of use combine to make statements, at once biting and humorous, about the human condition.

(Biography provided by Elisa Contemporary Art)
Applied Filters2 results
Artist:Nina Bentley
to
Item Location
2
2
2
Overall Height
to
Overall Width
to
2
2
2
11,594
3,126
2,532
1,919
2
2
2
Searching for the Right Type 2, Limited Edition print, typewriter, figures, text
By Nina Bentley
Located in Riverdale, NY
"Searching for the Right Type" is a limited edition print. It is 11x11, framed to 20x20. It is an edition of 12. The imagery is an old typewriter and small plastic figures. The pa...
Category 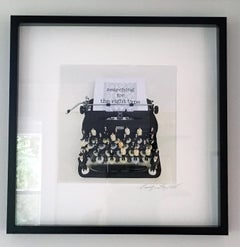 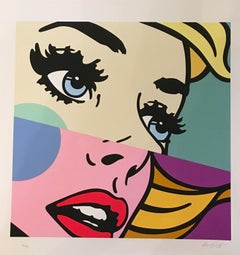 H 11 in. W 11 in.
Entitled VII
By Nina Bentley
Located in Riverdale, NY
Entitled VII by Nina Bentley is a mixed media sculpture created with a metal tray, metal servers and cups, resin and styrofoam. It is an original, one of a kind sculpture. A long-t...
Category