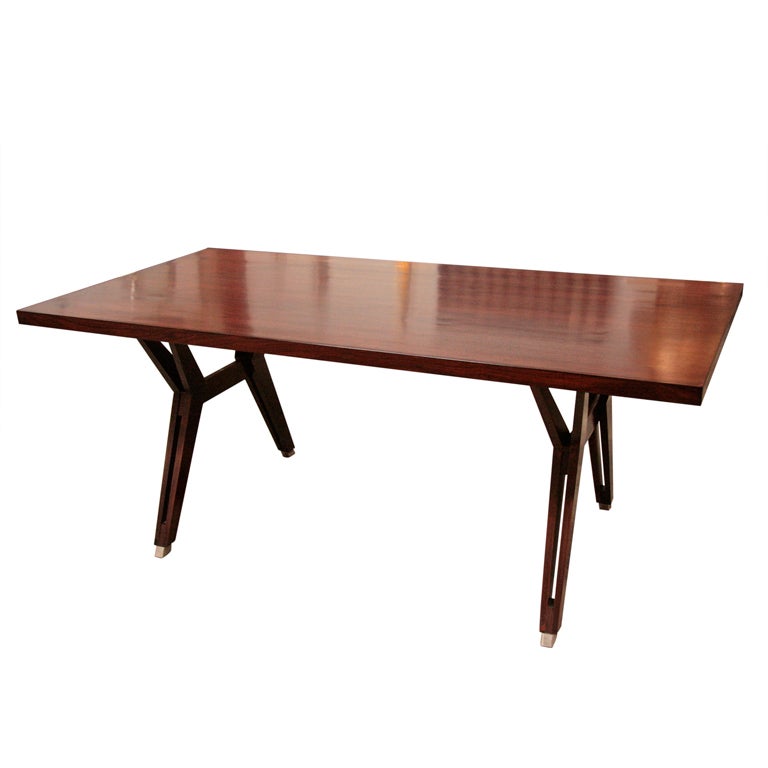 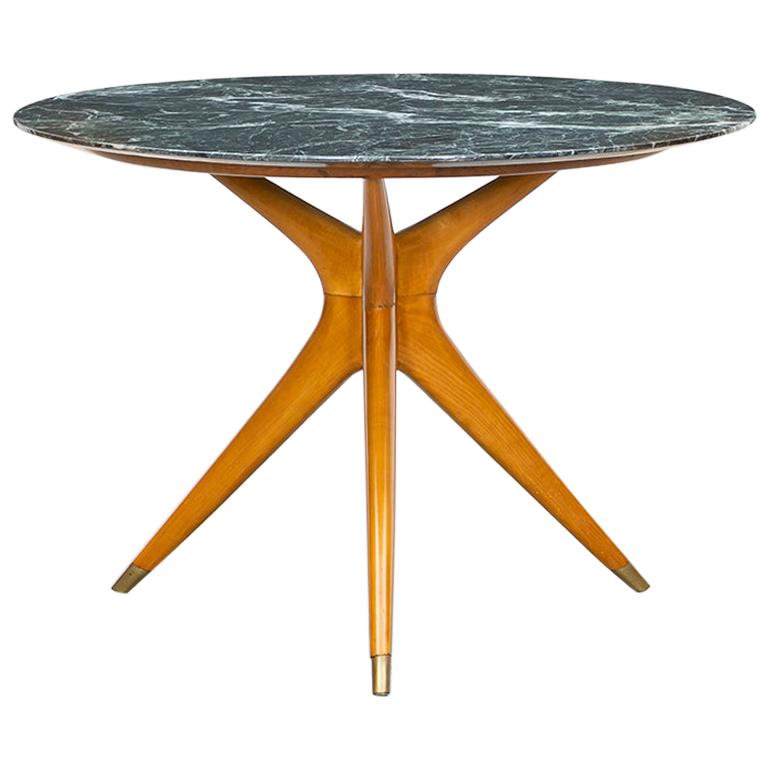 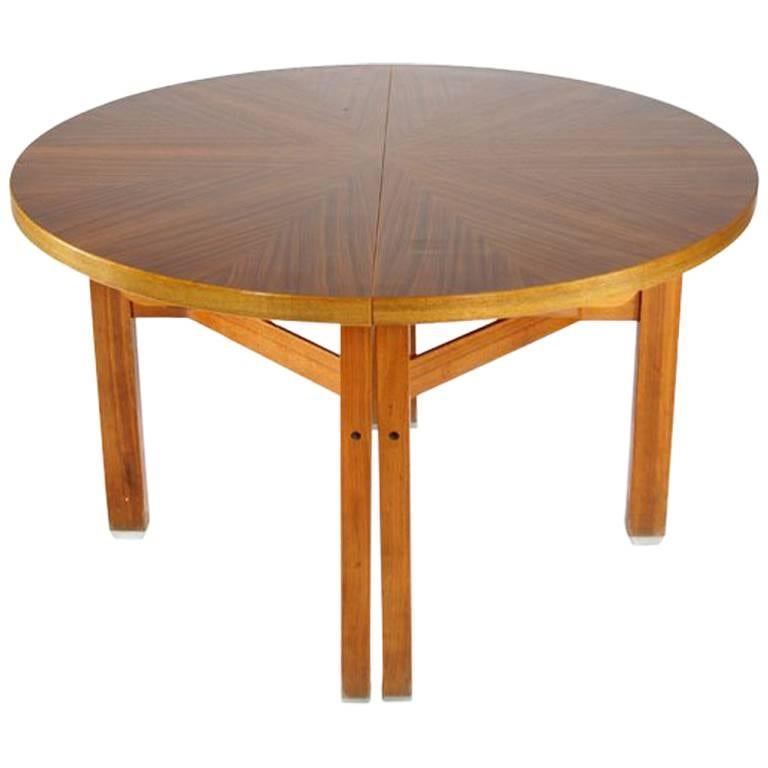 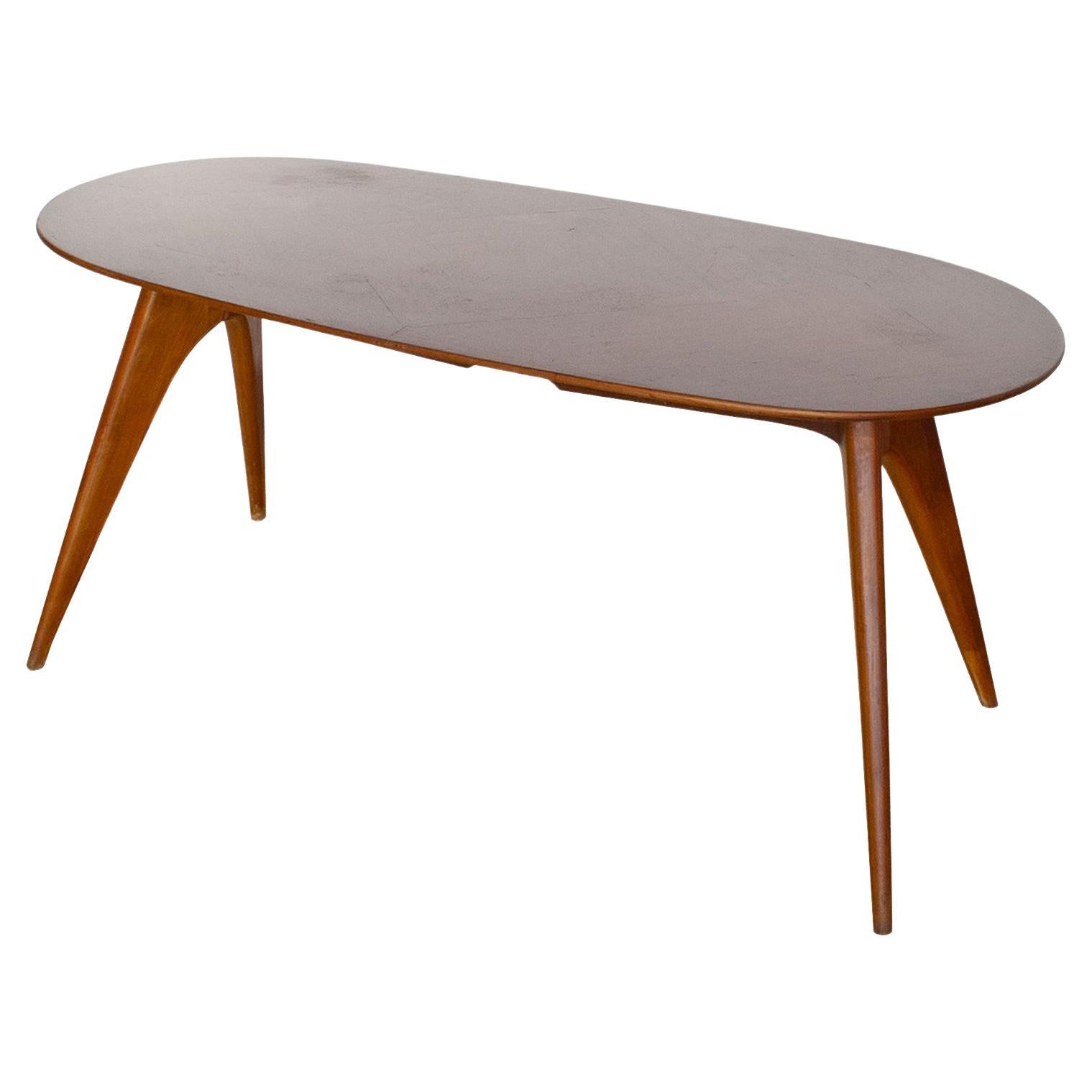 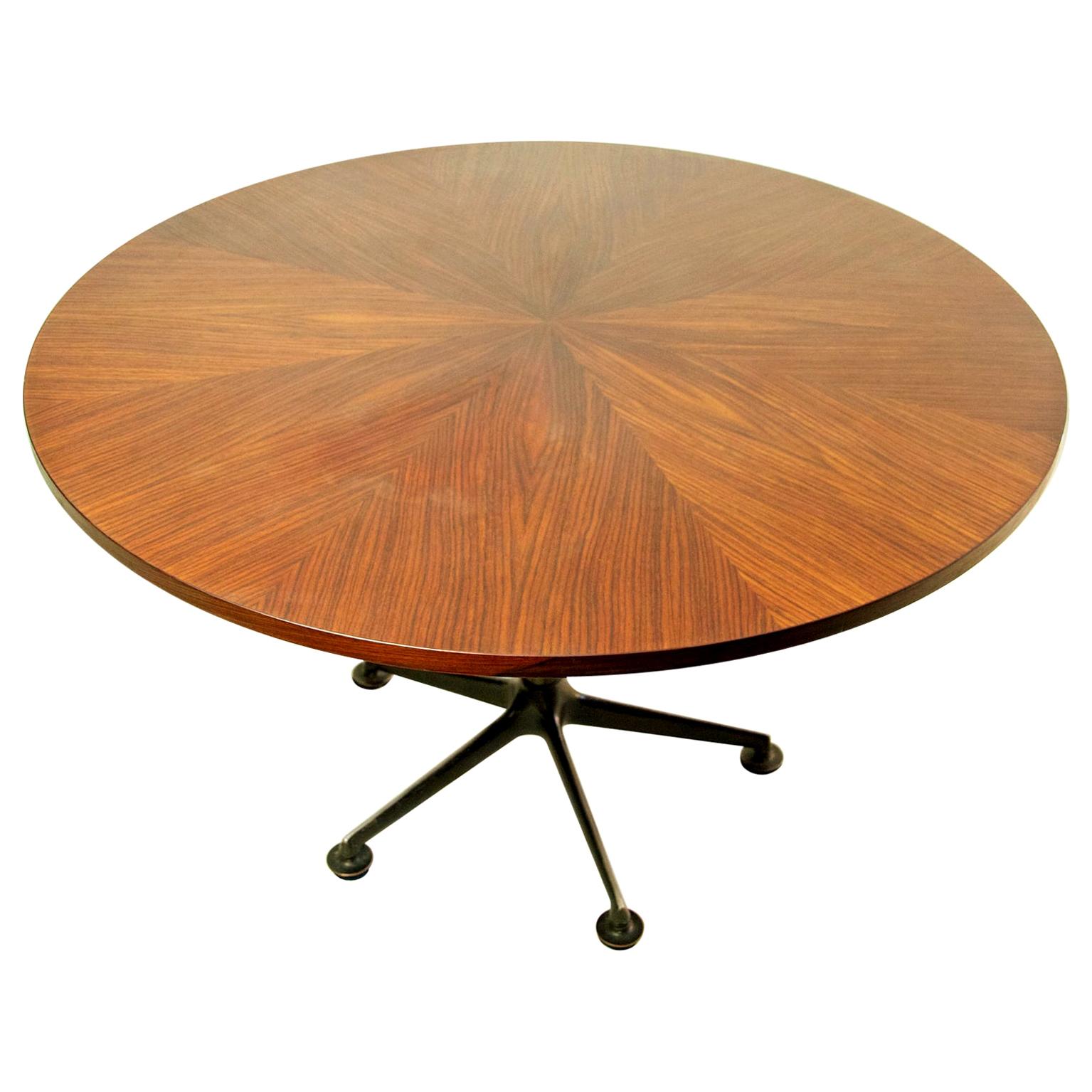 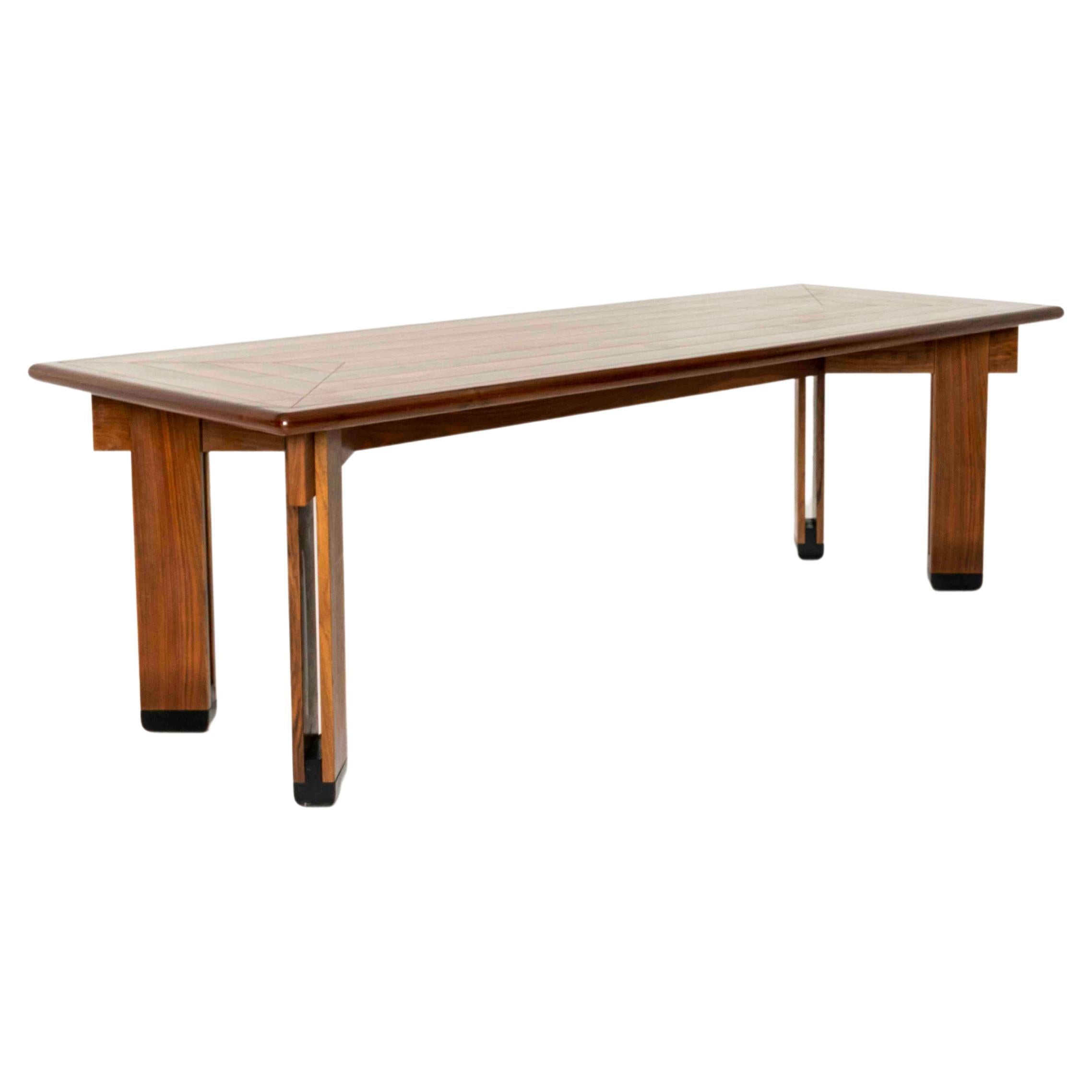 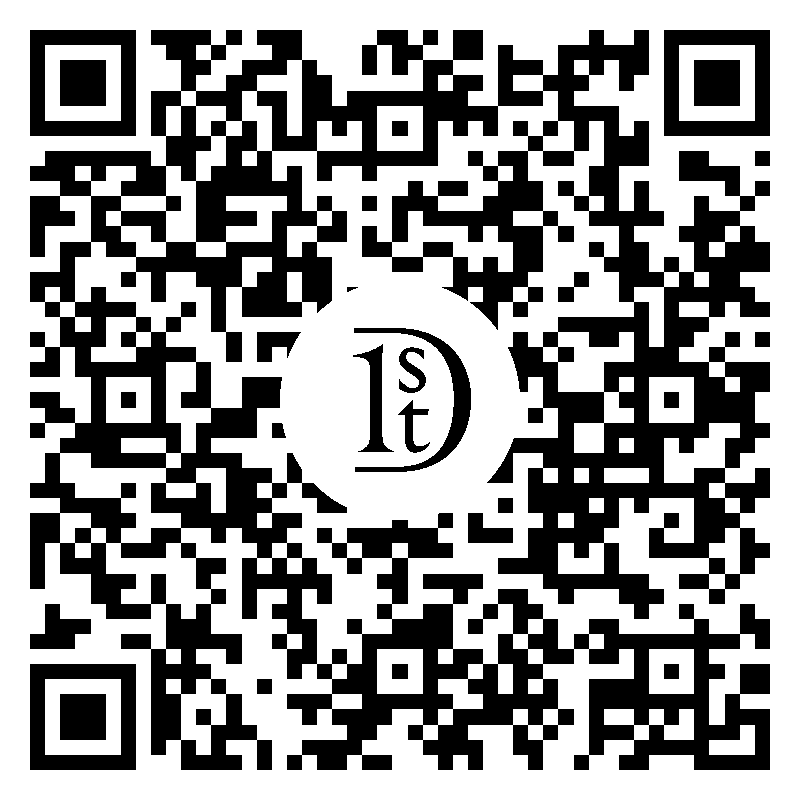 Table designed by Ico Parisi in 1955, relaunched in 2020. Manufactured by Cassina in Italy. Designed in 1955, the design of this table – a piece of furniture considered by Ico Parisi to be a central element in the home - accompanies the Maestro’s career and evolves with different materials. The Olimpino table has a slender, bold and recognisable square section tubular metal frame made of two pairs of "Y" shaped uprights, whose upper inner arms converge to join under the top, while the outer arms diverge to block the rectangular plate of the top, in monolithic tempered glass, with a brass side stopper. The legs, thus paired, are strengthened with a double crossbar, also in metal, which opens near the sides and forms a double "V" shape. The solid wood arrow feet embellish the design, as do the large brass screws. The table is available in two sizes and one height. Important information regarding images of products: Please note that some of the images show other colors and variations of the model, these images are only to present interior design proposals. The item that is selling is on the first image. Important information regarding colour(s) of products: Actual colours may vary. This is due to the fact that every computer monitor, laptop, tablet and phone screen has a different capability to display colours and that everyone sees these colours differently. We try to edit our photos to show all of our products as life-like as possible, but please understand the actual colour may vary slightly from your monitor About the designer: Domenico Parisi, nicknamed Ico, was born in Palermo on the 23rd of September 1916 to Sicilian parents who were living in the Piedmont region. In 1925 the Parisi family moved to Como where Ico earned his diploma as a building inspector in 1936 and completed an apprenticeship at Studio Terragni. The studio gave him the opportunity to get to know and interact with prominent figures of Como's architecture and art world such as Cattaneo, Lingeri, Radice, Rho, Persico and Sartoris. Passionate about cinema and photography, at Studio Terragni's request he photographed the Casa del Fascio. Discharged from the front in 1943, he returned to Como and resumed his design activity, mainly working on individual furnishings, exhibition stands and interior architecture. He collaborated with Luisa Aiani and soon married her in 1947. Together they opened the studio La Ruota, a place of design but also a place of art, exhibitions and culture. Parisi's work became more and more prolific from the 1950s, in both the architectural and design fields. He designed furniture, firstly unique pieces with craftsmen from Brianza and later for Industrial Production with companies such as Cassina, as well as numerous decorative art objects using materials such as ceramics and glass. The late 1960s marked a precise turning point in his Design Research. With Contenitoriumani, created in collaboration with the sculptor Francesco Somaini and presented for the first time at the Milan Furniture Fair in 1968, Parisi embarked on a new path of investigation aimed at defining a utopian-existential IDEA of living. The culmination of his design and existential research came between 1974 and 1976 with "Operazione Arcevia", addressed in a collective and interdisciplinary manner and aimed at designing an entire Community. The work was presented at the 76th Biennale of Venice and subsequently exhibited at the National Gallery of Modern Art in Rome (1979). This strongly utopian socio-urban experience gave rise to his subsequent graphic research, which became the theme of innumerable collective and personal exhibitions. He died in Como on the 19th of December 1996. About the manufacturer: In a continuing dialogue between past, present, and future, Cassina has created the I Maestri collection, revisiting furnishing designs by the twentieth century’s best-known architects, including Le Corbusier, Pierre Jeanneret, Charlotte Perriand, Charles Rennie Mackintosh, Gerrit Thomas Rietveld, Franco Albini, Frank Lloyd Wright and Marco Zanuso. While the designs and functional concepts have been precisely preserved, the models have been manufactured using evolved technology. This is also the company that has manufactured iconic pieces of contemporary design from the 50’s to the present day, ideated by some of the most important international designers. Today Cassina continues to look to the future of design with audacious, passionate curiosity and an open, holistic approach. It affirms its exclusive ability to furnish a home’s living and dining spaces completely and iconically with The Cassina Perspective: a concept, a philosophy, an informed, futuristic thought. A detailed, expansive horizon of combinations; when placed together, the products have an innovative soul and the modern icons create authentic, welcoming, personal atmospheres involved in a conversation dominated by a code of design excellence, formal sensitive awareness, solidity and cultural authority. 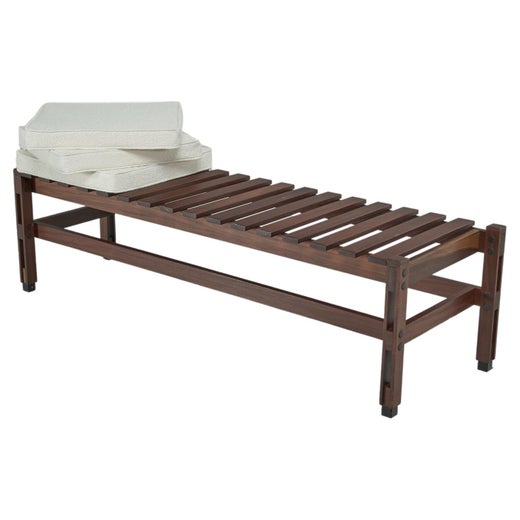 Domenico “Ico” Parisi was one half of a prolific postwar design duo he comprised with his wife, Luisa. Their furniture designs are known for running the stylistic gamut, with celebrated mid-century modern pieces ranging from elegantly skeletal — like dramatic ebonized dining chairs — to plush and shapely, like the iconic 1951 Egg chair, in a plethora of materials.

The son of an art teacher father, Ico Parisi was exposed to art at an early age. Born in 1916 in the Sicilian capital of Palermo, he and his family moved to Como in 1925. There, the young Parisi would begin to develop his interest in architecture and design. After earning a degree as a building inspector in 1936 and working as a civil engineer, Parisi took on an apprenticeship in the studio of Giuseppe Terragni, the modernist, fascist Italian architect, pioneer of the Rationalist movement and creator of the iconic Casa del Fascio.

While working for Terragni, Parisi crossed paths with such contemporary design talents as Lucio Fontana, Bruno Munari and Pietro Lingeri, though he briefly moved away from design and architecture to explore photography and film. His artistic work would soon be interrupted, however, by the outbreak of World War II, during which he served at the front before returning to Como in 1943. There, he resumed work as a designer and architect, founding two architecture groups: the Alta Quota and the Gruppo Como.

Through his creative circles, Parisi met Luisa Aiani, a former student of the prolific architect and furniture designer Gio Ponti, who was affiliated with the Alta Quota. They married in 1947 and founded the studio La Ruota — a cross between a design firm and an intellectual salon — in Como shortly thereafter. In 1950, Parisi finally completed his architectural schooling, studying under the nationalist architect Alberto Sartoris at the Athenaeum Architecture School in Lausanne, Switzerland. He and Aiani began several decades of sophisticated output, designing curved sofas upholstered in yellow velvet and armchairs with slender mahogany frames for enduring Italian manufacturers such as Cassina and others.

Much like Charles and Ray Eames in America, the Parisis worked as a team and relied on experimentation in style and material for many of their designs. Ico Parisi died in Como in 1996.

About the Seller
4.9
Located in Barcelona, Spain
Platinum Seller
These expertly vetted sellers are 1stDibs' most experienced sellers and are rated highest by our customers.
Established in 2015
1stDibs seller since 2015
1,210 sales on 1stDibs
Typical response time: 4 hours
More From This SellerView All
You May Also Like