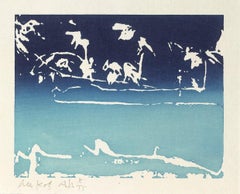 H 6.13 in. W 7.5 in.
Blue Flags - 21st Century, Alex Katz, Landscape, Flowers
By Alex Katz
Located in Köln, DE
"Blue Flags" is not only a lovely sight over a wide meadow full of spring flowers. It is also made in the impressive printing technique of the woodcut and combines traditional handcr...
Category

H 18 in. W 24 in.
Maine Woods 3
By Alex Katz
Located in Fairfield, CT
Alex Katz was born in 1924 to a Jewish family in Brooklyn, New York, as the son of an émigré who had lost a factory he owned in Russia to the Soviet revolution. In 1928 the family mo...
Category

H 64 in. W 44 in.
Sunrise
By Alex Katz
Located in New Orleans, LA
The beauty of the Maine woods is captured in an extreme close up view of sunrise through the green leaves of a tree. The image at first appears abstract because of the perspective ...
Category

H 32.5 in. W 26.5 in.
A TREMOR IN THE MORNING PORTFOLIO
By Alex Katz
Located in Aventura, FL
The complete portfolio, comprising of 10 woodcuts on Rives BFK paper. Each hand signed and numbered. Contains ten poems by Vincent Katz and 11 original linocuts by Katz. Published by...
Category

Alex Katz
A TREMOR IN THE MORNING PORTFOLIO, 1986

H 20.25 in. W 19.875 in.
Nicole
By Alex Katz
Located in London, GB
Signed in pencil, numbered from the edition of 50. Printed and published by Graphicstudio, Tampa.
Category

H 36.01 in. W 80.01 in.
Brisk Day
By Alex Katz
Located in London, GB
The set of three prints; woodcut, screenprint and aquatint printed in colours. Each signed in pencil and numbered from the edition of 150. Printed on Somerset paper by Takanaka, Kyot...
Category

H 35.99 in. W 29.02 in.
Blue Flags
By Alex Katz
Located in Miami, FL
A beautiful print that is in the tradition of the delicate Japanese landscape paintings, this white background print is both wispy and colorful. Katz is both a portrait and landscape...
Category

H 20.25 in. W 29.88 in.
Corinne
By Alex Katz
Located in Chatsworth, CA
This piece is an original woodcut created by Alex Katz in 1990. Katz is an American painter renowned for his large-scale depictions of landscapes, flowers, and portraits. This piece...
Category

Find the exact alex katz woodcut you’re shopping for in the variety available on 1stDibs. Find Pop Art versions now, or shop for Pop Art creations for a more modern example of these cherished works. Making the right choice when shopping for a alex katz woodcut may mean carefully reviewing examples of this item dating from different eras — you can find an early iteration of this piece from the 20th Century and a newer version made as recently as the 21st Century. On 1stDibs, the right alex katz woodcut is waiting for you and the choices span a range of colors that includes black, white, yellow and gray. Frequently made by artists working in woodcut print, lithograph and screen print, these artworks are unique and have attracted attention over the years. A large alex katz woodcut can be an attractive addition to some spaces, while smaller examples are available — approximately spanning 14.5 high and 10.88 wide — and may be better suited to a more modest living area.

How Much is a Alex Katz Woodcut?

The price for an artwork of this kind can differ depending upon size, time period and other attributes — a alex katz woodcut in our inventory may begin at $3,500 and can go as high as $24,300, while the average can fetch as much as $6,500.